The Last Day Of My Summer Vacation

This past weekend, the last days of my summer break were winding down rapidly, and I was bound and determined to make the best of every minute. So what to do with my dwindling hours of freedom?

Weed the garden?
Paint the back steps?
Tackle one last spray painting project?

Yeah. Did all that on Saturday.

Which left me exactly one last precious day of freedom. Which I decided to spend at my favorite summer place on this earth.

This wild Washington beach has been our family's favorite camping spot for decades. But we had no time for cook stoves and camp sites at this late date. So bright and early on Sunday morning, my three younger daughters and I embarked on a highly unorthodox day trip to the coast.

Oh. And Ranger came too.

And here is the story of our long, lovely day at the beach. 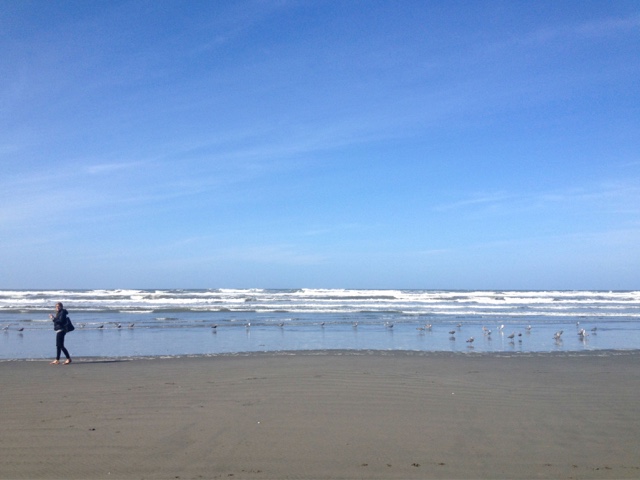 ^ After a six a.m. wake-up call and a four-hour drive, our first moments on the beach were a dream. The clouds parted, the sun shone with abandon, the tide ebbed, and a flock of gulls stepped up to greet us. Out came the cameras to capture the moment.

True, we were wearing multiple layers of fleece, but in the Pacific Northwest, these are the makings of a perfect summer day. 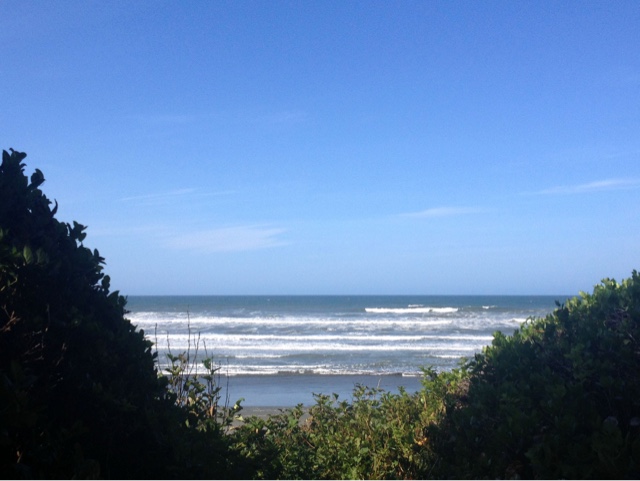 ^ A peek-a-boo view from the campground revealed a long line of clean, white breakers between me and the infinite blue. 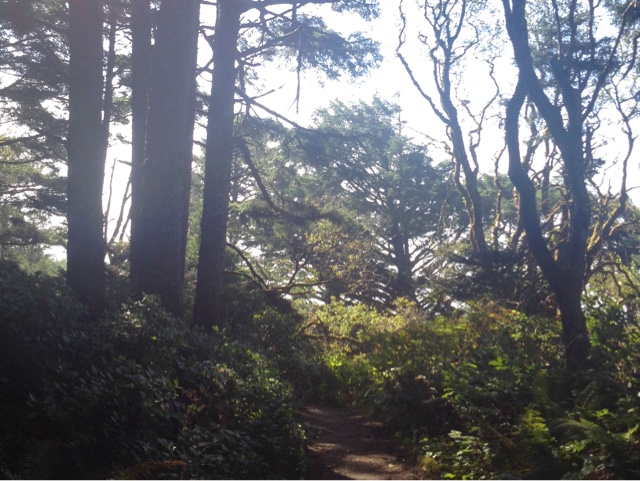 ^ This beach trail overflows with memories from the days when my girls pretended that the paths around the campground were Mario Kart tracks. This one always puts me in the mind of Rainbow Road and I see myself careening over the edge into the murky depths below. 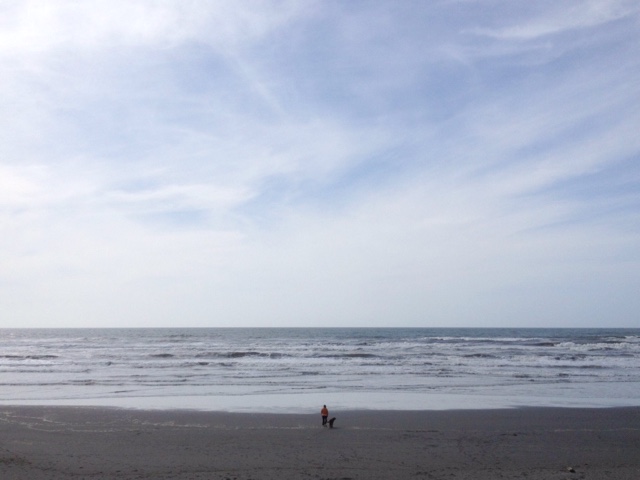 ^ Ranger and me at the edge of the mighty blue Pacific. 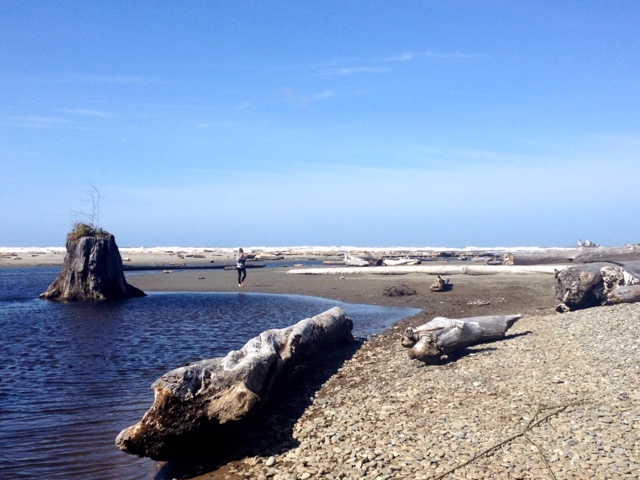 ^ Where Kalaloch Creek enters the Pacific is a place of freshwater magic that we call the lagoon. Gnarled and bleached beach logs decorate the landscape like climbing structures, the flat stones alow for fantastic skipping, and all of us - Ranger included - consider this an ideal playground. 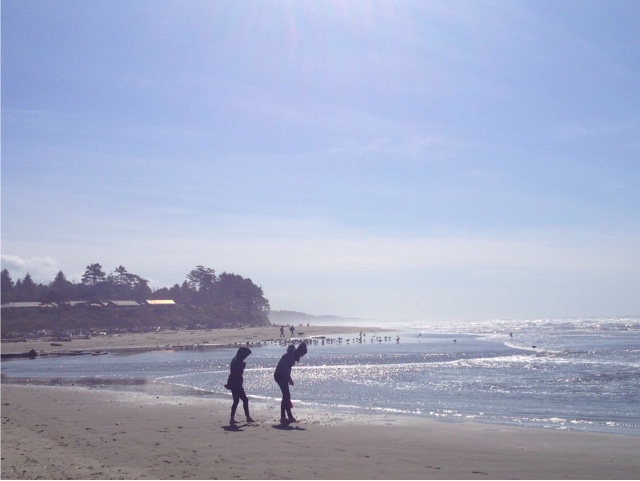 ^ I do not understand everything that my daughters do. I have also learned to stop asking questions. 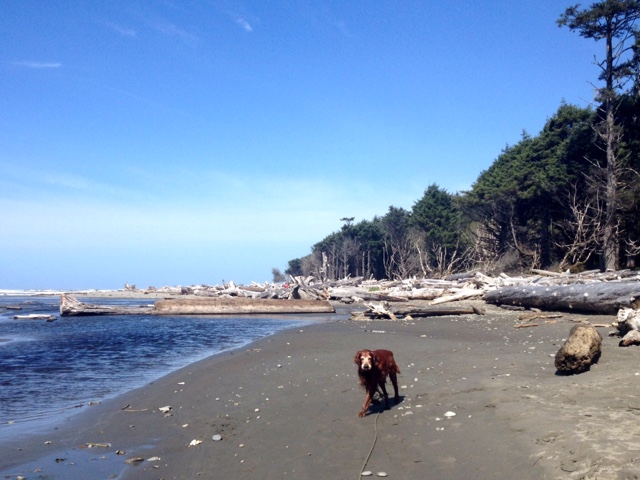 ^ Ranger, on the other hand, exhibits highly predictable and self-explanatory beach behavior.

(Runs along the lengths of the logs with his nose skimming the sand, drinking in delicious if invisible scents.) 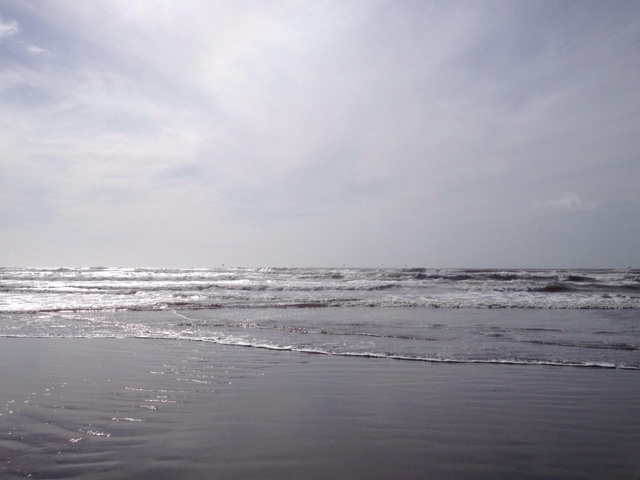 ^ As the sun arced from its morning hiding place among the trees over the campground, to high above the water during the long afternoon, the sunlight played against the ocean in a variety of angles and intensities. Capturing each subtle difference became my obsession, and I've got the camera roll to prove it. 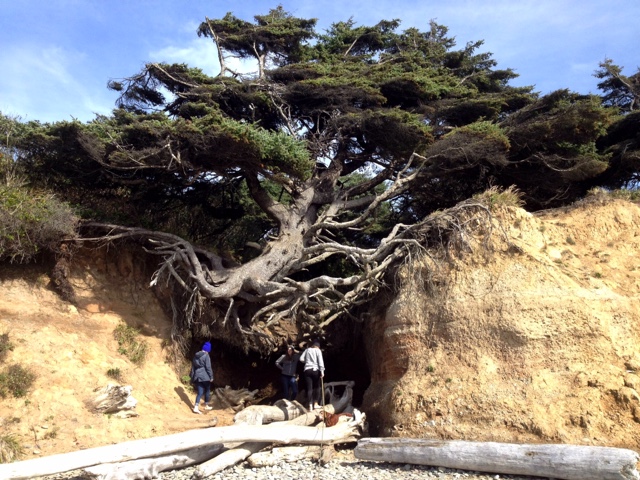 ^ This suspended tree offers a living cross section of itself and, along with the tiny freshwater stream that trickles out from underneath, presents an irresistible place to explore. My daughters still find themselves drawn to this imaginary "cave" of their youth, though Ranger has always regarded the closed-in space with trepidation. He is not a fan. 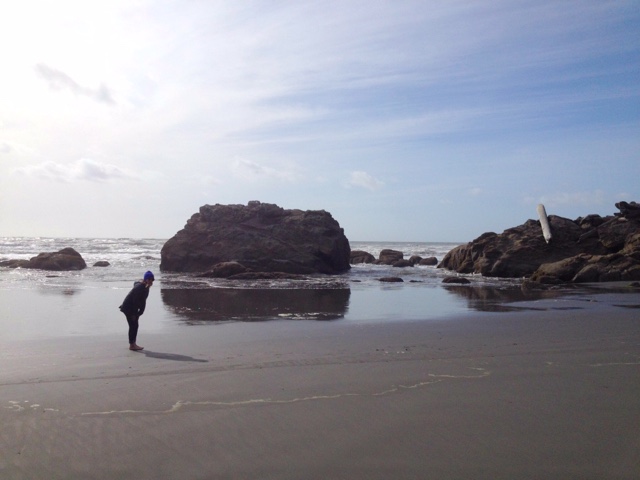 ^ A long hike down to the north end of the beach at low tide rewards us with a rare opportunity to adventure among some rocks that are typically surrounded by water. 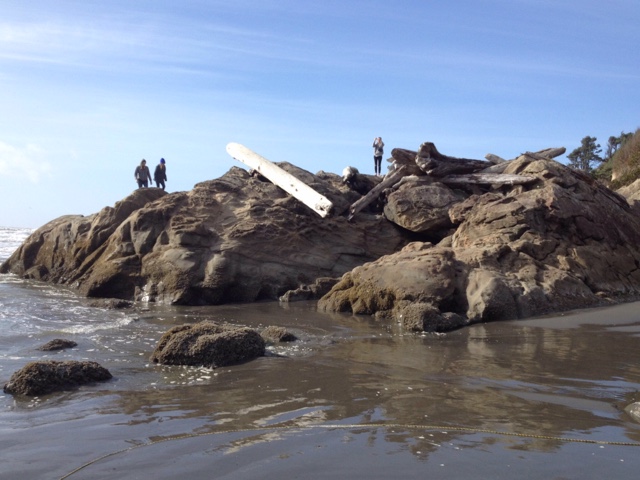 ^ After exploring around the main bulwark, Daughter Number Three decided the only way to go was up. Numbers Two and Four soon followed, all climbing monkey-style up the steep incline to the top. As usual, Ranger would have no part of such foolishness, so he and I stayed safe on the sand. 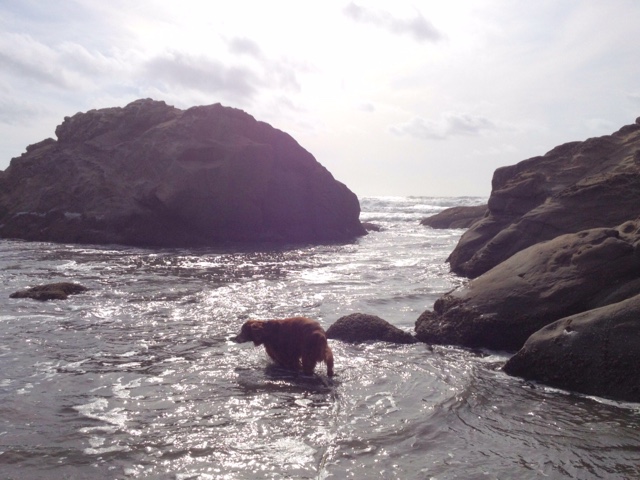 ^ Well. Ranger took it upon himself to wade while we waited for the rock climbers. But still, that sand was solid beneath his furry feet, just how he likes it. 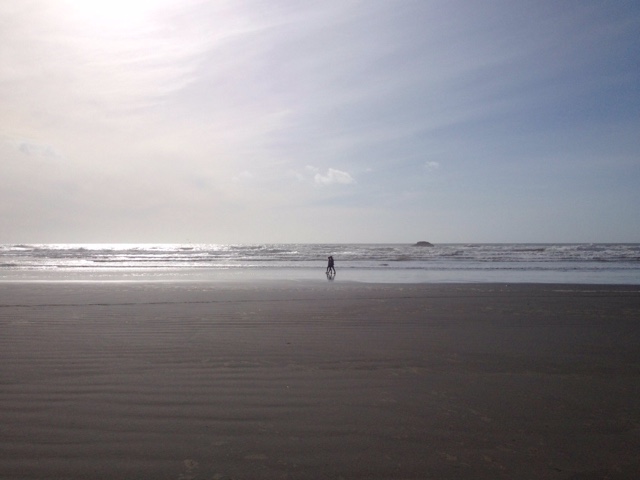 ^ The sun drifted down the sky as we walked back to our base camp in the sand. 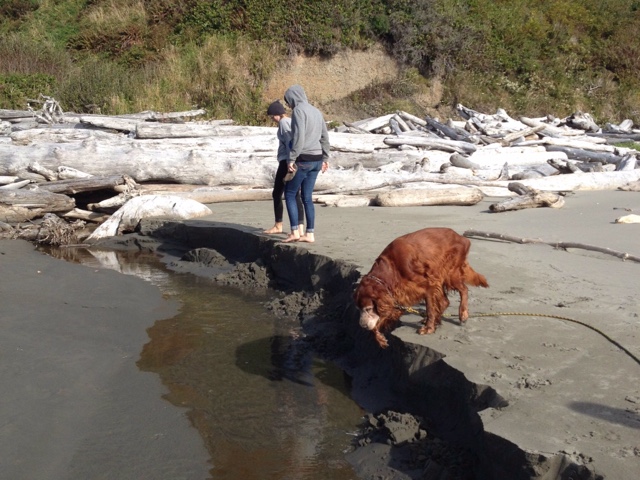 ^ Where freshwater streams cross the beach to join the ocean, these sharp-edged sandy min-cliffs form and present an irresistible invitation for someone to sully their top edge. Each footstep crumbles the fragile border and causes both a load of sand and the offending foot to crash down to the lower level of the stream. This too is an age-old game for my family, though this is the first time that Ranger has joined in on the action. 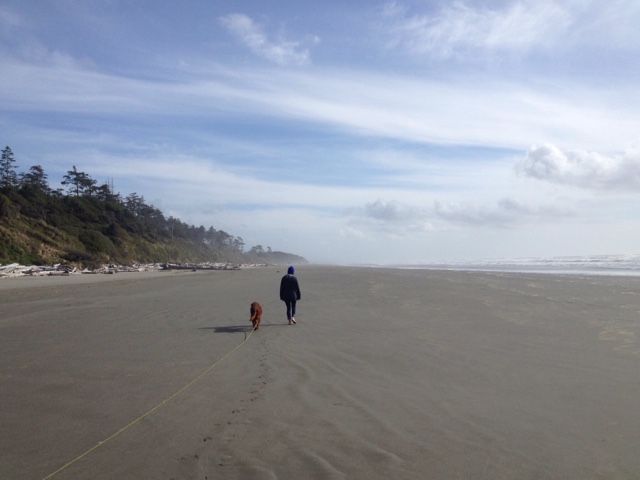 ^ A girl and her dog, walking back. We found our outbound footprints in the damp sand, and all took turns trying to walk backwards in our opposite-direction steps. 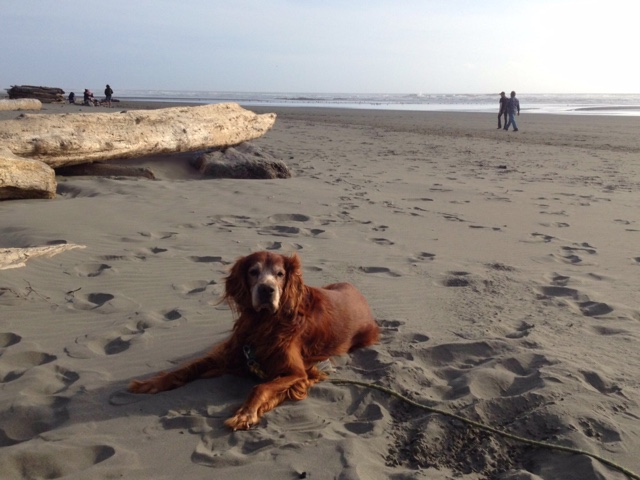 ^ Settled back at our spot, we conferred with our timepieces and concluded that our time was just about up. The girls requested a few last minutes to hop in the waves; Ranger and I sat back to drink in the last wind-blown moments of peace. 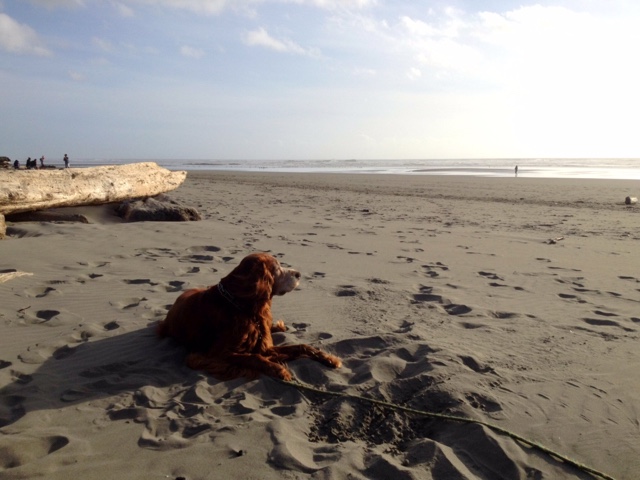 ^ Sadly, there was no rest for poor Ranger, who smelled the impending change in the air. So keen to our habits is he that he sat on pins and needles through these final moments, knowing that something was about to happen. 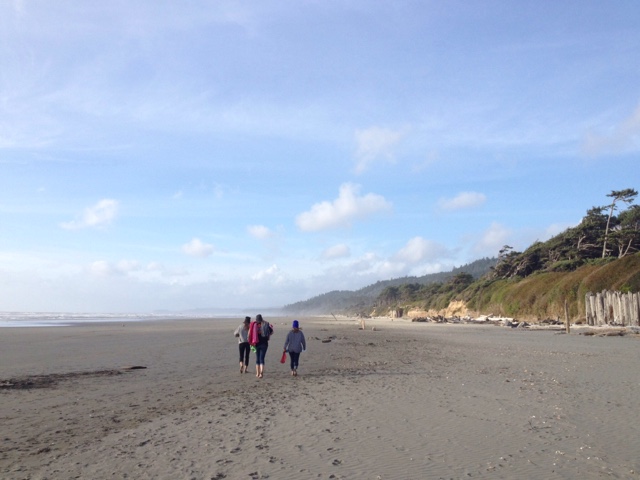 ^ Which, of course, it did. Shortly, we gathered up heaping armfuls of towels, books, snacks, jackets and shoes, and slowly, contentedly made our way back to the car and the long ride home. 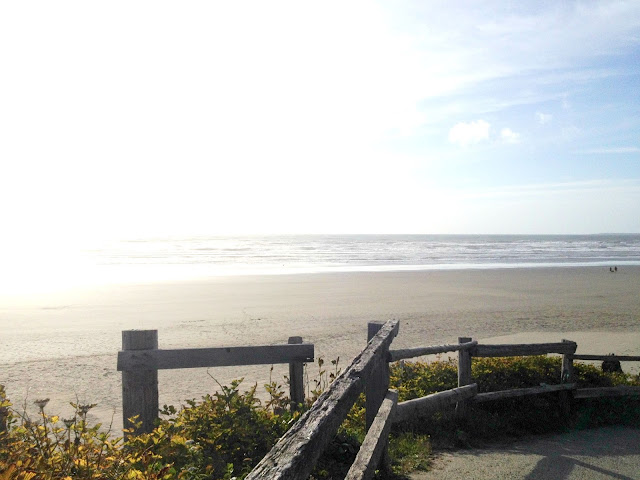 ^ Making our way up and away, I turned around, as I always do, for one last look.

Goodbye Kalaloch! I promise we'll be back soon.

With Peace And New Beginnings
Heidi And I Go For A Walk
We Both Like Whidbey
The Last Day Of My Summer Vacation
Walking On Rialto Beach
Double Bluff Beach
Hiking At The Beach
Posted by Diane Streicher @ Diane Again at 3:45 PM

Email ThisBlogThis!Share to TwitterShare to FacebookShare to Pinterest
Labels: Pet Love, Seasons and Celebrations, Travels Near and Far