If memory and the captions in my old school photo albums serve, it was 1995 that we first discovered the tide pools at Kalaloch. 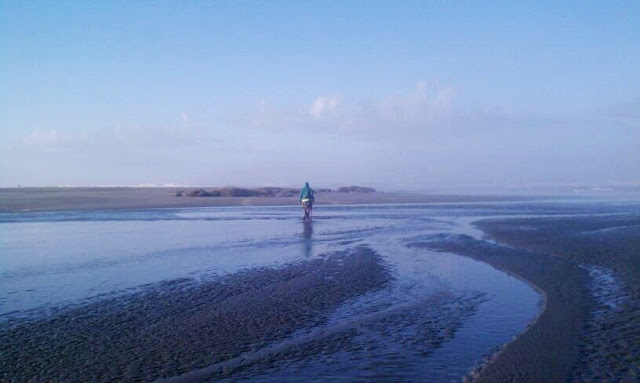 ^In 2011, luck was with us as our stay at Kalaloch coincided with some extreme minus tides. Hiking out across a vast expanse of soggy sand that would normally be buried under meters of Pacific blue isthe first step in the process of visiting the tide pools.

These puddles of magic and mystery appear as the tides recede to their lowest ebb - minus tides are the very best - and that happens when the moon is full. When conditions are just right - and heaven help me, the perfect time always seems to be in ridiculously early hours around dawn - the Pacific waters draw back and reveal vast stretches of sand peppered with rocks that are otherwise submerged. Living in and among these rocks and in the pools of water around and between them are a special assortment of plants and animals that truly take my breath away. 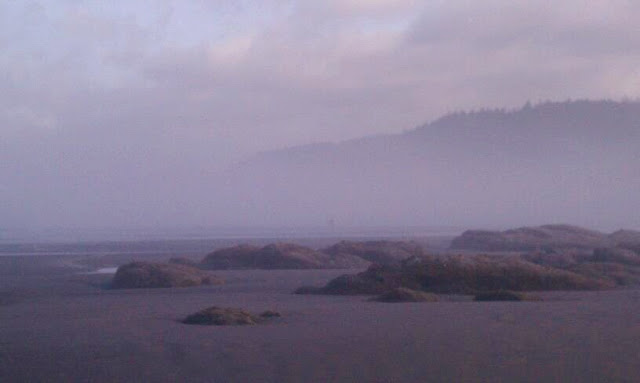 ^Brownish grey rocks covered with barnacles and mussels dot the beach, and foggy mists drift in and out between them. I often wonder if I'm seeing a herd of sleeping elephants.

It was on an early August morning back in 1995 that my husband and I dragged our sleeping angels from their warm and cozy sleeping bags, stuffed them into their polar fleece jackets, filled them with hot cocoa, and marched them out onto the cold sand.

We brought our dog, Casey, too. 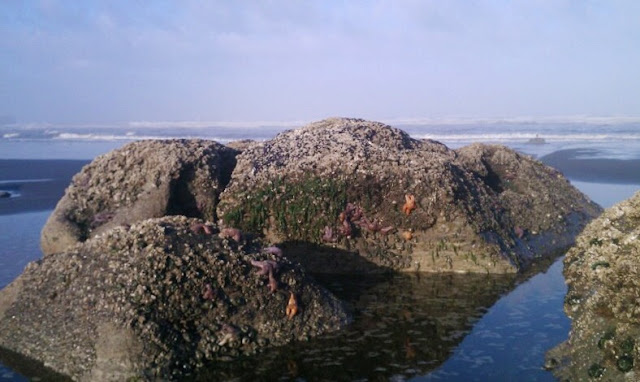 ^ The waves crash far in the distance, and the rocky mounds are surrounded by still, silent pools of trapped water. It's here in the intertidal zone that some unique and clever animals live out their lives.

Knowing very little about Pacific Northwest tide pool phenomena, we were clever enough to follow along with the other groups of predawn gagglers. Everyone was headed to the low mounds of rocks easily visible about the sand where yesterday there had been nothing but the shimmering ocean. 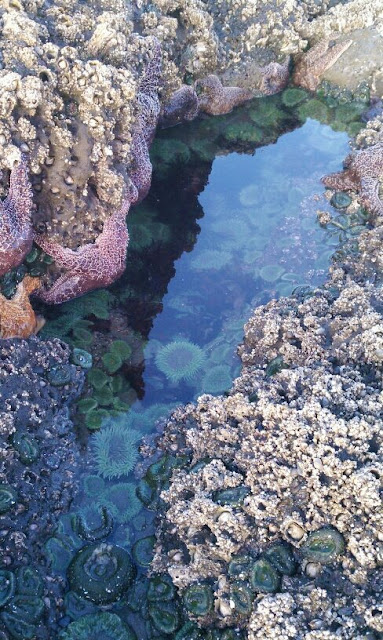 ^ When they are exposed to air, sea anemones look like blobs of green jelly, as shown in the bottom right corner of this shot. But when the waters close over them, they "bloom" into what look like showy green flowers. But they are actually animals.

The starfish - or sea stars, as they are scientifically named - were super easy to see. Purple and orange legs adeptly clung to the curiously bumpy rocks. But we with no guidebooks or experience with these creatures were at a loss to understand much more of what we were seeing. 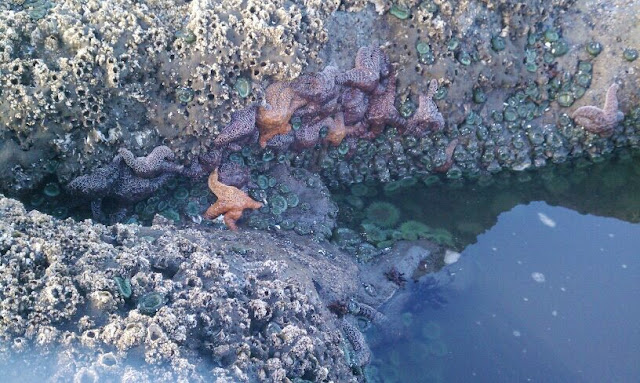 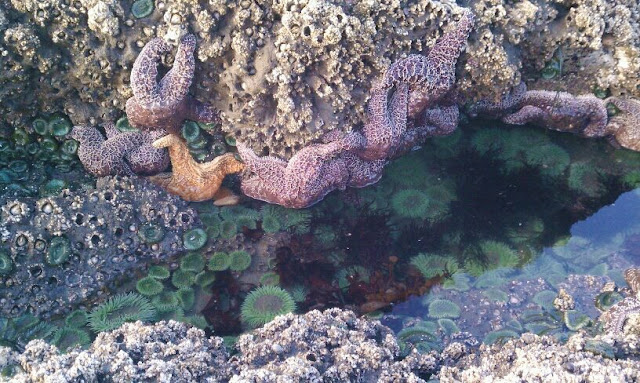 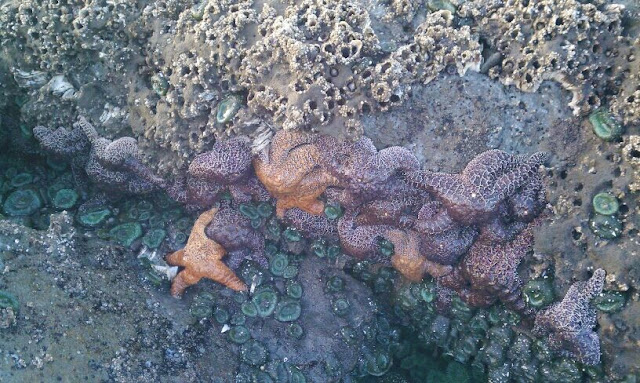 ^ Sea stars eat directly with their stomachs, located in the middle of their underside. They roll over expanses of barnacles and mussels, prying open the shells with their powerful feet, and putting their stomachs directly into the openings and thusly slurping up the otherwise difficult to reach but oh so juicy tidbits

And it just about that moment when a bright and shining 19- or 20-year-old popped out from behind one of the rocks and began to chat with us.

Correction. She lectured us. In the nicest possible way. Seems that she was a college student from the Georgia studying marine biology and these was her first visit to a proper Pacific Northwest beach. Beside herself with excitement and bursting with knowledge, she led us around for the next hour or so, teaching us all she knew about tide pools and the animals who live there.

And of course, our old friends, the sea stars. 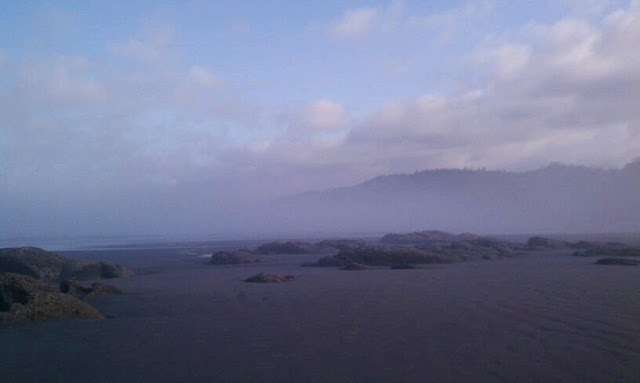 ^ Eventually, the tide turns and the waves come closer and closer, sending furies of water across the quiet pools and reminding us that our time is almost up.

I learned a lot that day.

My baby daughters did too, as our new friend encouraged them to look deeper, to .

Our teacher's passion for this beautiful, ever-changing environment was infectious, and I felt her fire taking hold in my daughters' hearts. 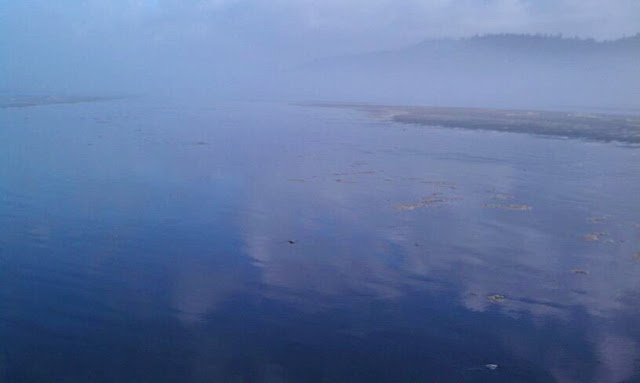 ^ Eventually, too, the warmth of the rising sun evaporates the mists and if we are extremely lucky, the blue sky of a glorious summer day at the beach begins to burn through.

Now, this morning, sixteen years later, we return to the tide pools at Kalaloch. The chill morning air, the grey mists, the bouncy red dog at the end of the long leash - these things are all the same.

But my daughters have grown up quite a bit. 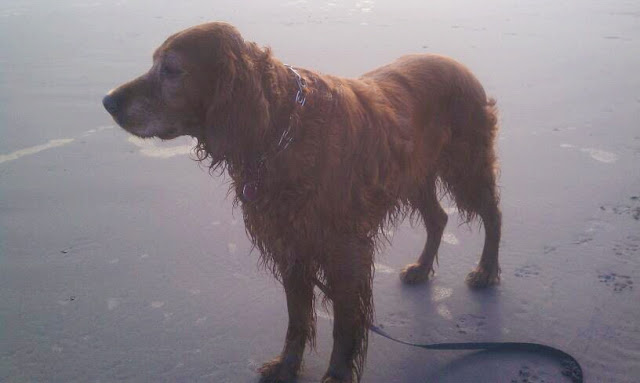 ^ Oh sure, he's standing still now. But he has been running around like a wild man for the past ninety minutes and even the Tasmanian Devil needs to take a break now and then.

^ Our good boy, Casey, has gone to his reward but Ranger is here to romp through the smaller, uninhabited puddles and generally have a rollicking good time at the beach. 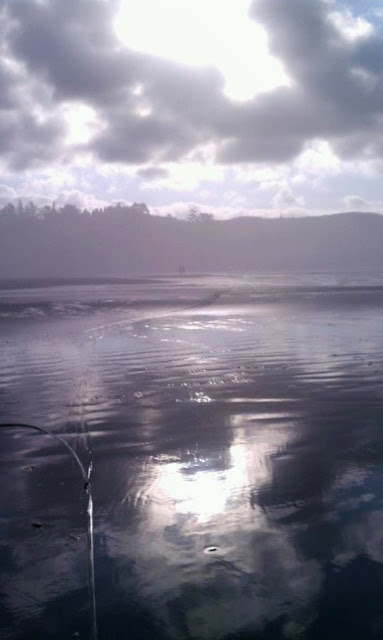 ^Shimmering light flashes across the wet sand as we head back to our camp for a proper and well-deserved breakfast.

And after years of studying with their marvelous science teacher, it is now their brains that are bursting with knowledge, their voices that excitedly call out one exciting find after the next, their hearts that beat faster as they bend down at the pool's edge in the early morning mist. 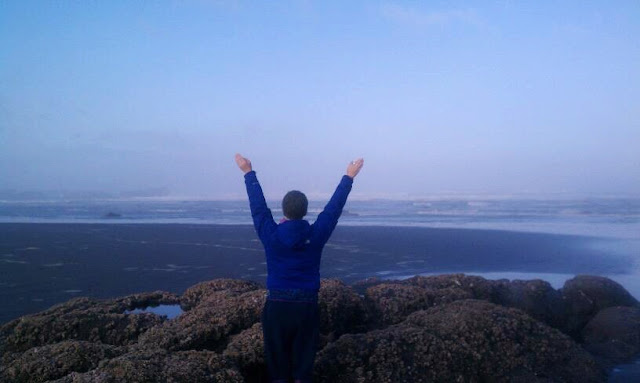 ^ Praises to the Pacific.

Visiting the tide pools is not something we can do every time we go to Kalaloch. Our treks to the rocks are controlled by the vagaries of the tides, Which makes these adventures all the more exciting and all the more magical.

Every time we visit the tide pools, it feels like we are discovering them all over again. 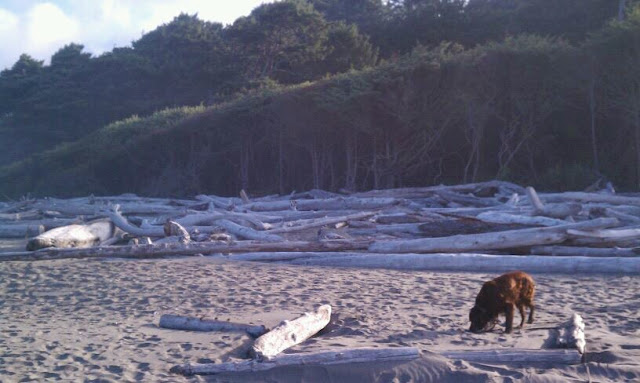 sometime before 2010
Golden Pup
Posted by Diane Streicher @ Diane Again at 3:30 AM