A Brief History Of The Kota Bharu Rebel Squad

Are you ready for this story about the life and times of Malaysian teenage boys? If so, please snap on your braces, lace up your Doc Martens and step into my time machine. We are going back in time to the 1990s where, on the opposite side of the globe from me, a group of young men were about to become the Kota Bharu Rebel Squad.

If you have no idea what I'm talking about, read this first. I'll keep the time machine idling till you get back.

Just one more thing before we go. When I first began to hear stories of the KBRS, the members referred to themselves as "skinheads." That word disturbed me. Here in the United States, the term has a very negative connotation, conjuring up images of backwoods extremists in Idaho who believe in racial violence, neo-Nazism, white supremacy, and gigantic stockpiles of semi-automatic assault weapons. I was very uncomfortable and rather confused to think that my gentle-spirited Malay blood brothers supported such extreme thoughts and behaviors.

But then I learned that all skinheads are not alike. Malaysian youth were influenced by a completely different sort of skinhead: the United Kingdom version. Point of interest: Malaysia was a colony of the crown until 1957, and continues to be very much influenced by the styles and culture of her former motherland. The UK skinheads rejected any sort of extremism and were more likely to rally around the concerns of the common working man, and the spirit of Oi! street music.

Two very different kinds of skinheads. Keep that in mind.

Finally, we're off! My friend, Mouse, is ready to take over this story.. First, here is the message he sent to me, introducing the text you are about to read:

two times i read this, then i found myself altering the article twice, then came three, four, five... its contain grammar errors, should you check it. i had it hard to remember those early years facts. doubts is the enemy. to avoid bad facts which might grows protest from the circle, i've remove few facts.
this only the early days story, before we met tumpat revolters.

I think Mouse's grammar is delightful, just as it is, and I have changed almost nothing. Now on with the story!

Middle of 90’s, Kota Bharu, a capital for Kelantan state stormed by Kurt Cobain and Billy Joe and that’s the dead end to the long time domination of Metal. Metal still strongly exist but it is punk, and grunge were mostly adapted. This invasion leads to the existence of skinheads, in Kota Bharu.

1996 was actually the roots in skinheads existence. Bunch of kiddies, who left the traditional lifestyle of Levi’s 501 and Irish Setter’s Red Wing shoes, shifted to the new dimension, something different, to Martens boots, Ben Sherman shirts, the braces and laces, The Business and The Oppressed kind of music, and of course, the bold spirit of football. This part of movement shouldn’t being ignore in history of Kelantan’s youth, a place whom once being labeled as ‘Paris Malaysia’.

This shifting era, include the born of Kelantan first Oi! band, The Throat, played in best known as the first gig in Kota Bharu’s modern age underground history held in KADA Resort which also include few Kota Bharu’s pioneer bands, Daffodils (grunge), Johnny Backer (Ramones’ clone), and also a side project punk rock band from The Throat and Daffodils members.

By 1997, The Throat had minor changing in the lineup, then switching the name to The Panic, was actually the first step for the existence of Kota Bharu Rebel Squad. The group of skinheads then claimed themselves as ‘The Panic Crews’. A couple of gigs were played in Perdana Resort, which also include bands from neighboring states, i.e Belacak and Disorder Track from Pahang. 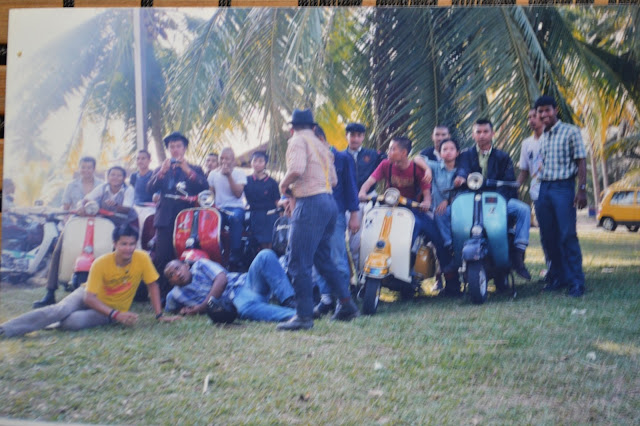 * * * * *
Welcome back to 2013. As I hear these stories and look at these photos, I am touched by several thoughts and emotions:


So all you KBRSers who are reading this, tell me more! I'd love to hear many more chapters of your amazing story.
Posted by Diane Streicher @ Diane Again at 12:00 AM