With the tent staked, the clothesline strung, and a proper makeshift kitchen set up, we officially kicked off this year's Kalaloch camping trip by heading down to the beach.

As we dropped down the steep path from the cliff-bound campground to the beach, Gracie all but hauling me headfirst, I bubbled over with anticipation. In all the twenty-five years I've been coming here, this magical place is always the same place but there's always something fresh, something different, something new with every visit.. I held my breath as I stepped out from the massive driftwood staircase to find... 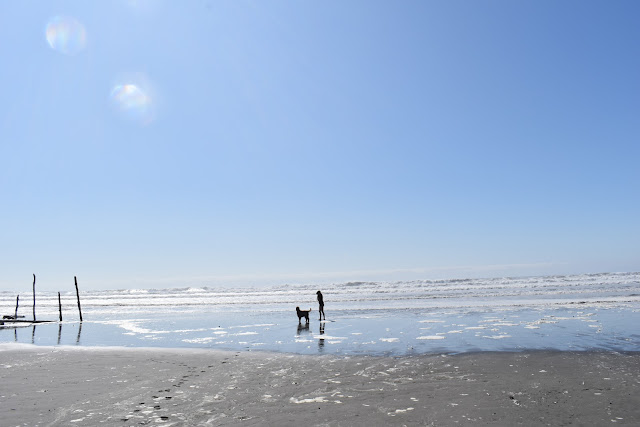 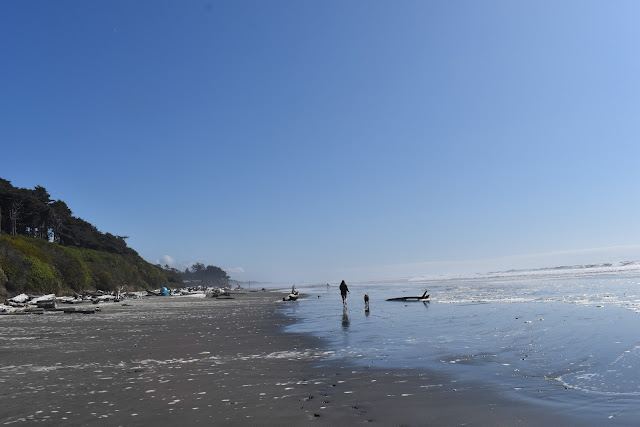 ^ Where in past years lay a tumble of massive beach logs - silver white trunks of trees stripped of bark and branches by the awesome power of crashing waves - so thick and wide that in order to get to the sane, we had to scramble hither and yon, working a maze from the bottom of the stairs to the open beach. But this year, at the end of the stairs lay nothing but a flat, wide expanse of glorious grey Pacific Northwest sand. 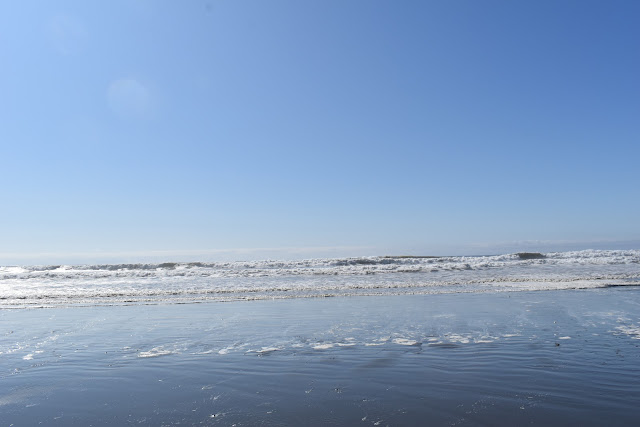 ^ Straight ahead, the Pacific Ocean towered over us, crashing waves that threatened to wash us away only to break themselves far from shore and harmlessly peter out around our ankles. 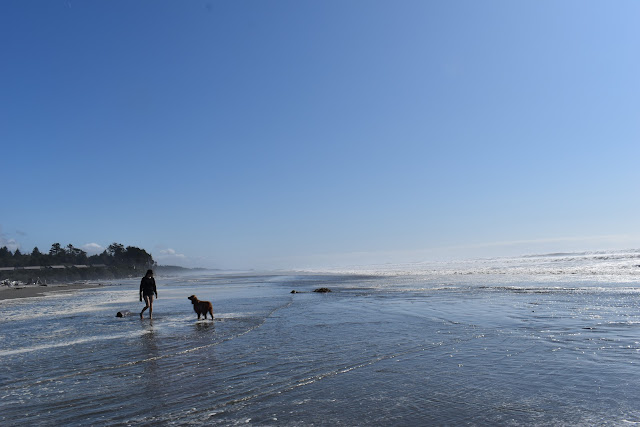 ^ In the wide stretch of sand and shallow water, we found plenty of places to play. 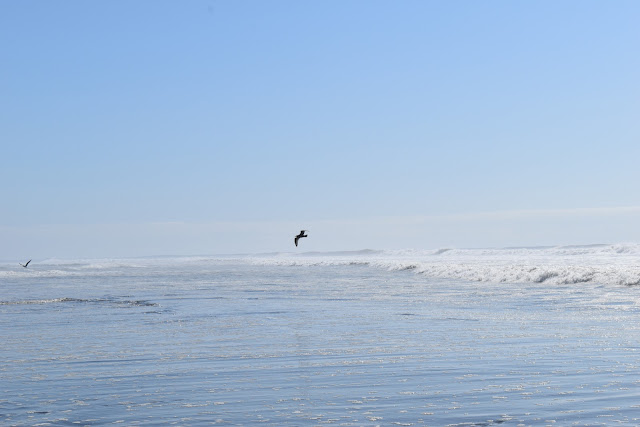 ^ Gulls swooped around is in the clear blue sky, adding a third dimension to our sense of unbounded space. 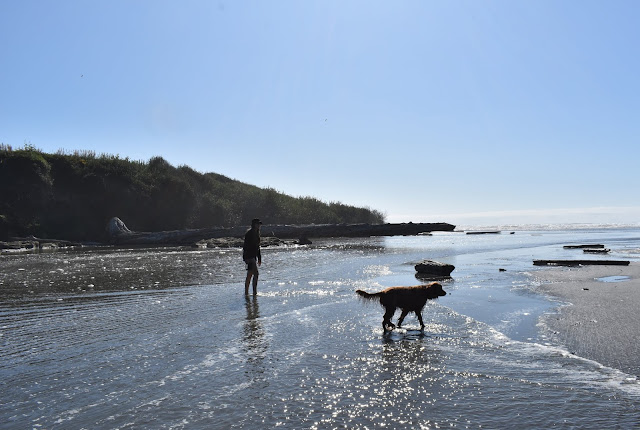 ^ Where Kalaloch Creek flows down to the ocean, in a little corner we fancifully call the Lagoon, we felt the difference too.

Tumbled heaps of massive beach logs that had rested half-buried in the sand here for the better part of a decade had disappeared.

An enormous sand bunker on the far bank of the lagoon was gone, leaving exposed rock jutting out into the water. 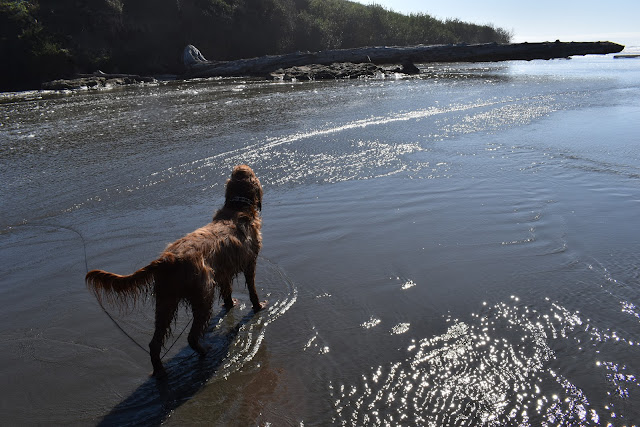 ^ No longer pinned between the logs to its usual narrow banks, the creek flowed wide and shallow, soft with sand. Normally, my dogs take no more than a step or two into the lagoon as the sides drop off into a deep flowing channel. But this year Gracie could easily keep her belly dry as she pranced from one side to the other, and she did so many times over. 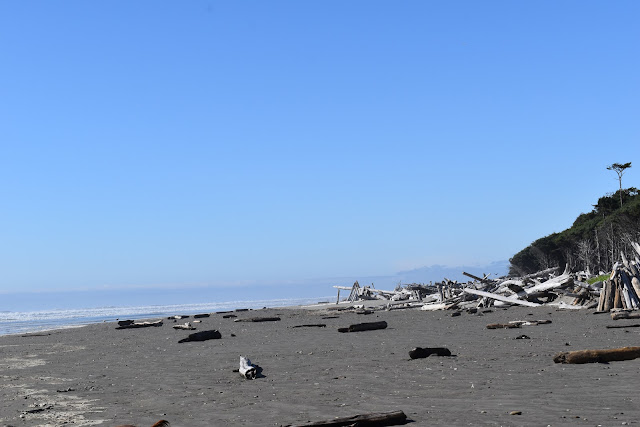 ^ Heading north from the lagoon, we see evidence that recent high tides have picked up and tossed around some low lying beach logs. Sure enough, later in the day, we saw some floaters and I had the educating experience of bumping into one. I learned that even a small log becomes a lethal weapon when tossing and turning unpredictably in the surf, and I was horrified to think how quickly one could mow down my dog. We steered well clear of the water until the tide turned and the water dropped away from the beached logs. 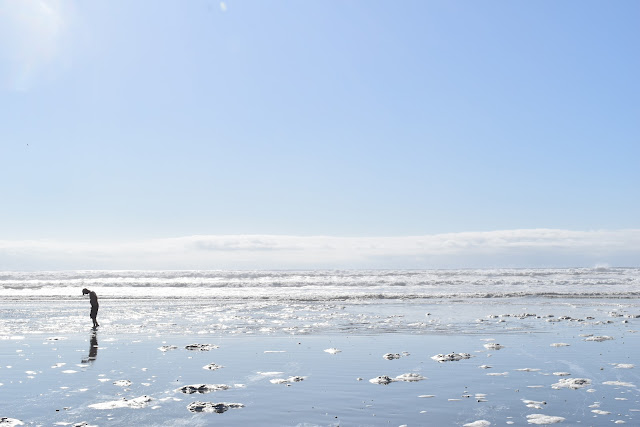 ^  Then we were once again free to walk along the sand, through the shallow waters, in the glistening sunshine under the crystal blue sky. 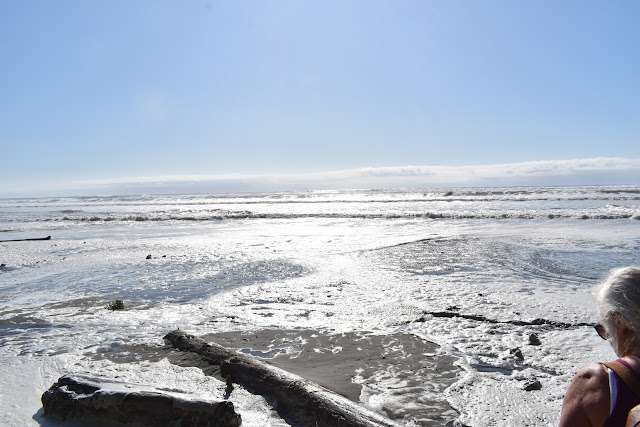 ^ And I fell in love with Kalaloch all over again, for her wonderful wide open spaces.

Posted by Diane Streicher @ Diane Again at 3:08 AM