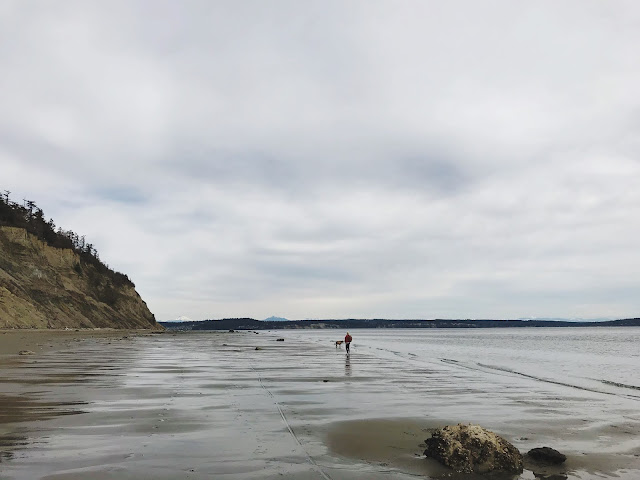 Here we are, Gracie and me, deep in the heart of the Pacific Northwest and enjoying a lovely hike down Double Bluff Beach. Though we traveled a mere eighteen miles from home, our day was packed with adventure. 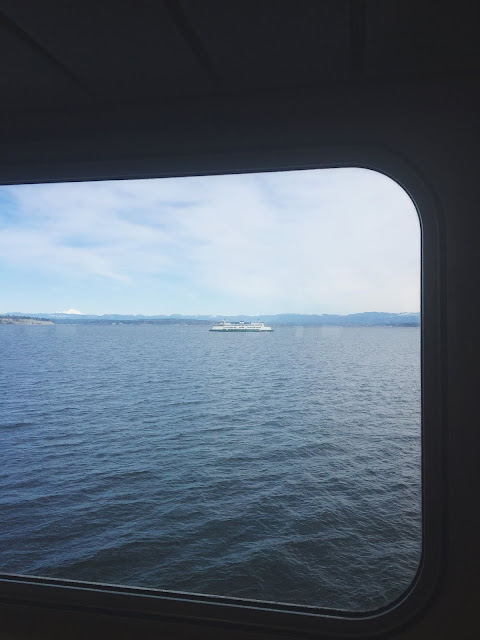 ^ My hometown is a ferry town. From the terminal just a few miles down the hill from my house, two big boats ply the waters of Puget Sound between the mainland and Whidbey Island. The islanders cross over mostly for shopping or work; we mainlanders love to head to the island for outdoor adventure. 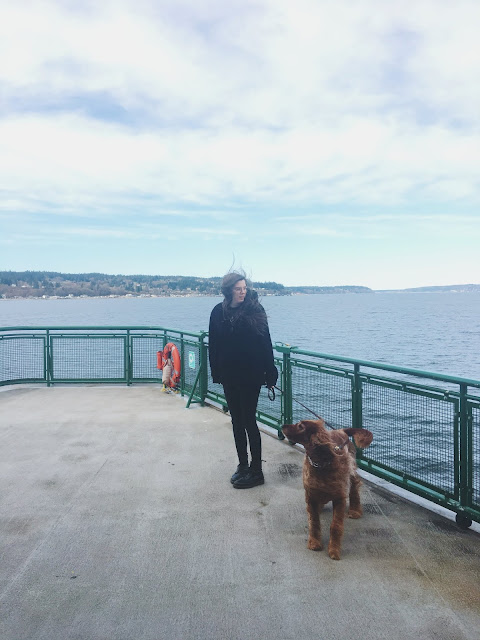 ^ The ferry crossing is, in a word, windy. Not that we're complaining. As we almost always do, my fourth-born and I voluntarily left our warm car to venture up to the passenger cabin and out onto the forward deck to take on the headwinds.

Daughter and dog were already outside attempting to not be blown overboard as I passed through the cabin on my way to join them. A group of  passengers stood inside near the door, and as I approached them, I overheard their happy chatter.

"Look at that dog's long fur being blown in the wind! And her owner's long hair is blowing every which way too. You know how they say that humans and their dogs often look alike? These two definitely do!"

Yep. They were talking about my traveling companions. And they were so right. 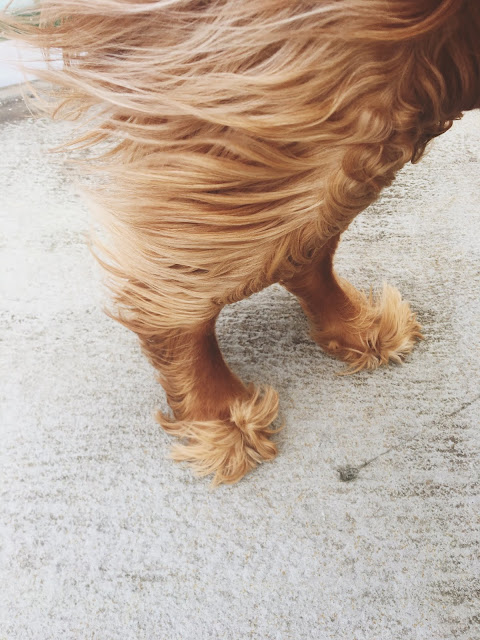 ^ I did not capture a close-up image of my daughter's hair standing on end. But Gracie's wild fringe - all the way down to her tousled toe fur - left me weak with laughter. 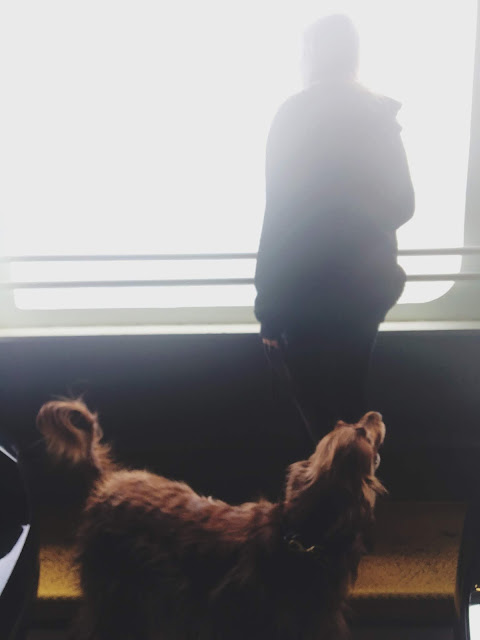 ^ Ten minutes later, with a quick pause at the car deck railing to check for seals, orcas or jellyfish, we re-boarded our car and sped off. Just eight quick miles on the main island road, and we arrived at our destination. 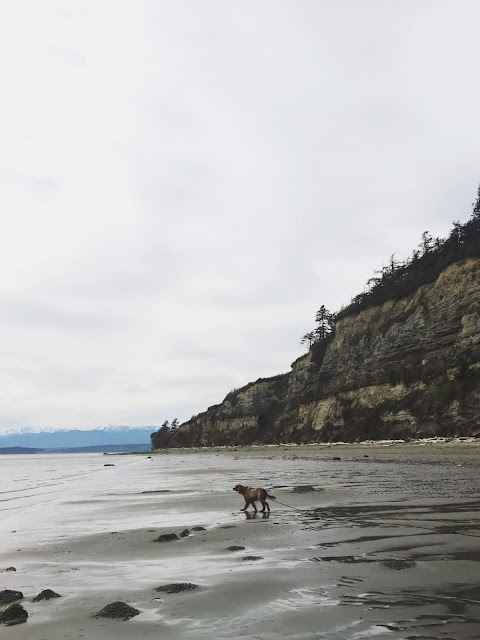 Now it's no secret that I'm fond of Pacific Northwest beaches:

the rugged tangle of beach logs tossed against the shore by winter storms.
the rocks that shelter tide pools where curious creatures live
the grey waters that lap at grey shores
the green ridges of triangle trees that line the horizon
the shadowy mountains that frame our special place in the world.

But this beach was particularly heart-stopping and I pinched myself to make sure I wasn't dreaming. 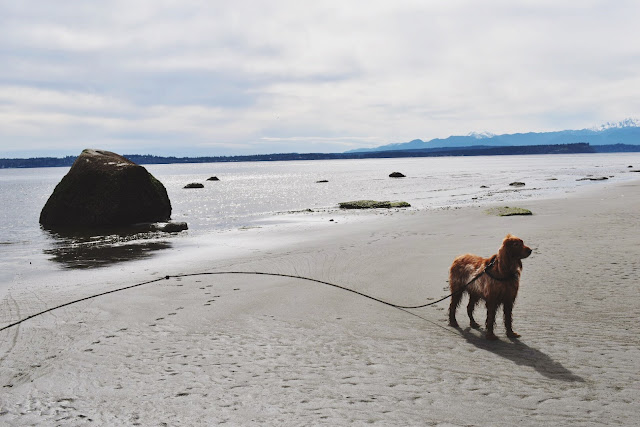 And if the natural beauty wasn't enough, this amazing spot was a dog park. 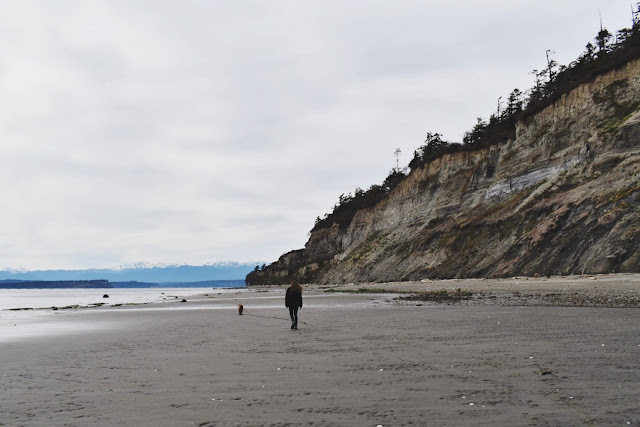 ^Yes. A place where our four footed friends are not just tolerated but welcomed.

And invited to run free. 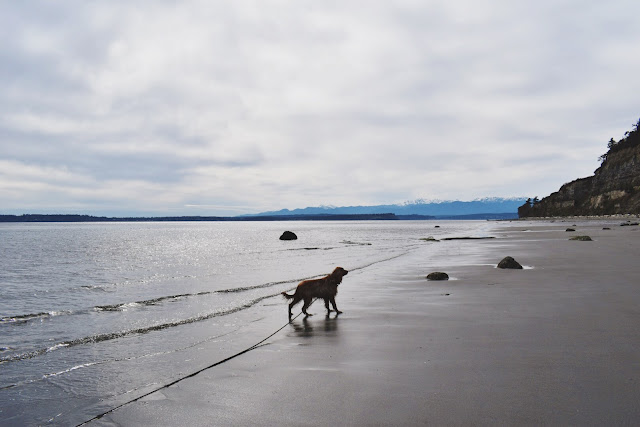 ^ Under my watch, Gracie has never enjoyed such freedoms. Oh sure, she's slipped out of the house at least a dozen times and treated herself to wild romps around the neighborhood.

But nothing in her past behavior has convinced me that she's responsible enough to go off leash and come back when she's called. 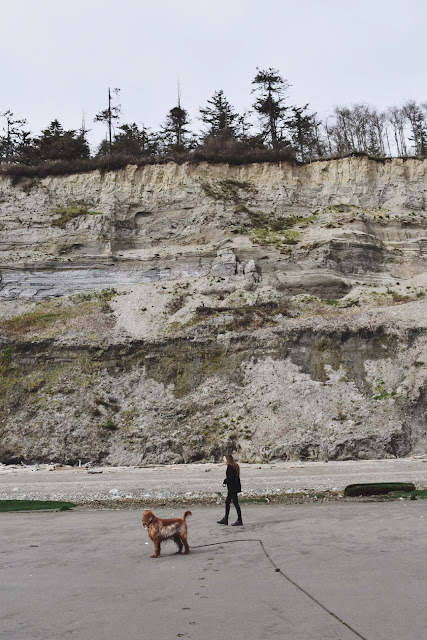 ^ So we compromised. I left her long thirty-foot lead attached to her collar, but I dropped my end. This way, my happy redhead was free to wander as she liked, but we humans still had a significant tactical advantage if she abused her freedom and we needed to get her back under control. 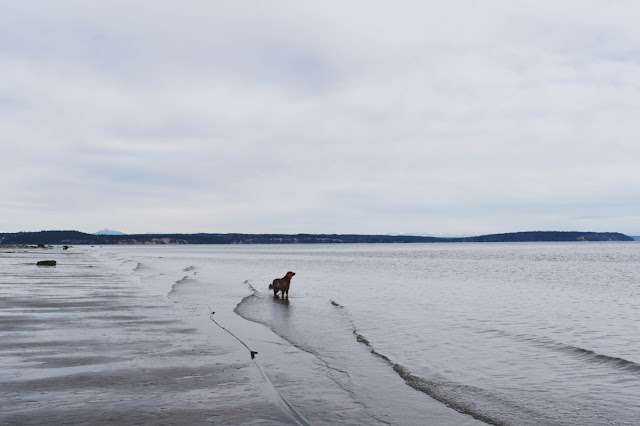 ^ Happily, I can report that Gracie handled herself responsibly. She trotted up ahead of us, wandering through the shallow waves and sniffing among the rocks, but always keeping an eye on us and staying reasonably close. 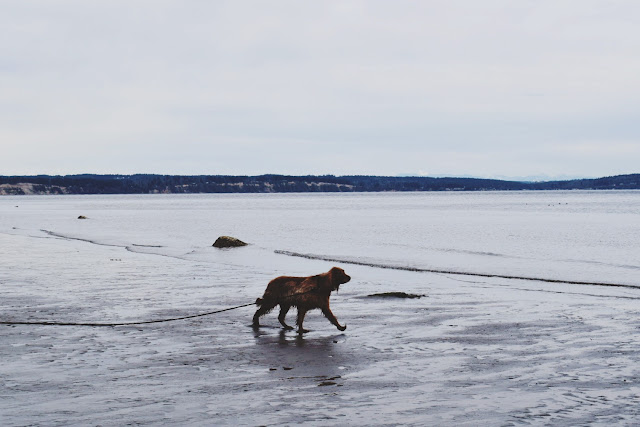 ^ And so we walked together through sea and sand and big open sky to the place where the beach ended.

^ Of course, the beach did not actually end. This is an island. But after a couple miles, we clearly reached the place where the bluff ended, which once towered high over our heads, melted down to a three-foot ridge in the sand. We peered around the end of it to find - you guessed it - more beach but decided we had ventured far enough. 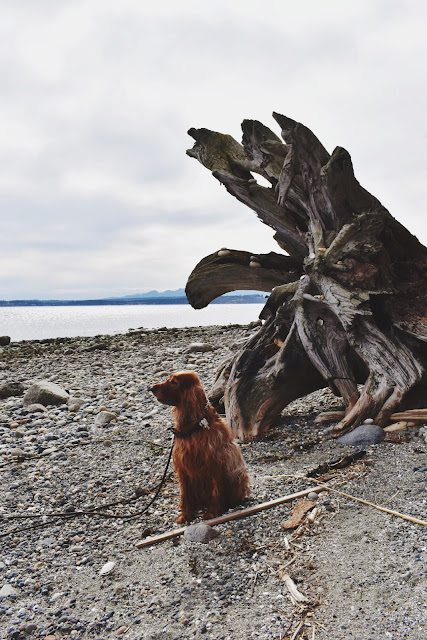 ^ One important feature of a good turning back spot is a photogenic spot for an end-of-trail photo. This massive chunk of upturned tree worked nicely. 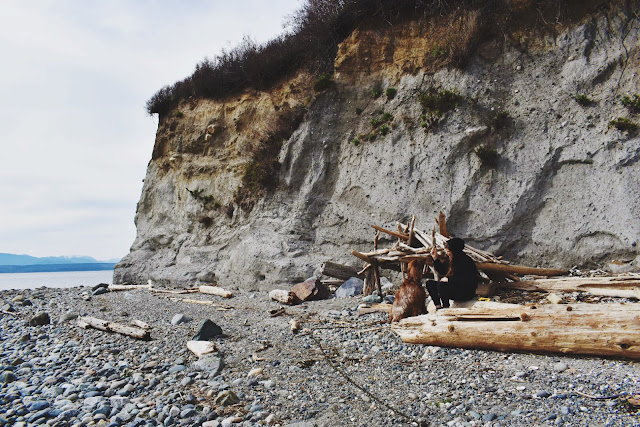 ^ And some other intrepid explorers had chosen this spot to build a driftwood homestead. That seemed a sure sign to stop and visit.

So we paused.
Surveyed our surroundings.
Marveled at the majesty.
Fed Gracie some treats.
Fed ourselves some dried fruit.

And turned around to begin the return leg of our trip.

As the outbound leg of our journey celebrated the largeness of this lovely beach, our return focused on details. 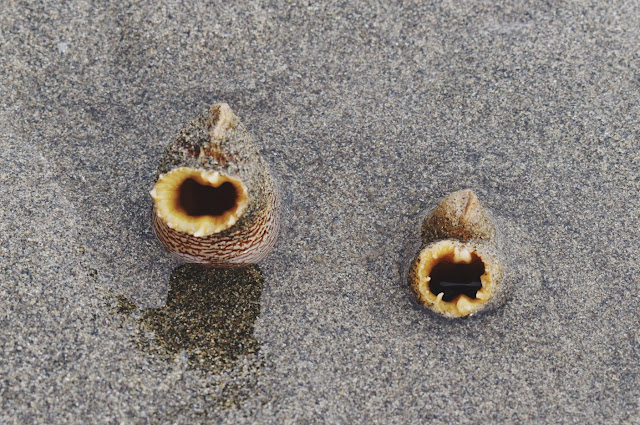 ^ We stepped carefully (and guided Gracie's long leash) around dozens of geoduck clams popping their long and shockingly ugly necks out of the sand. 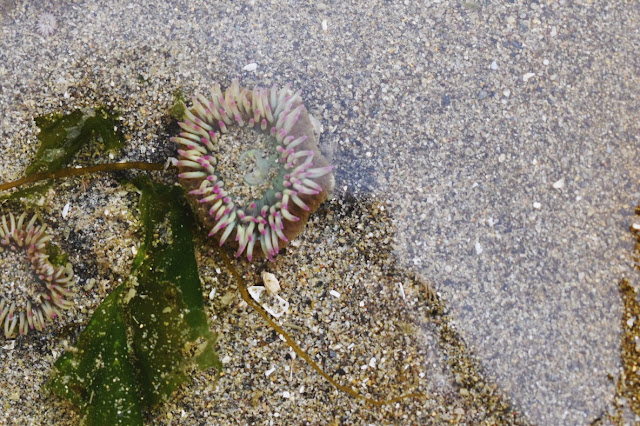 ^ We tried not to tread on the hundreds of sea anemones growing in patches on rocks and even on the sand. Most were shut up tight against the air but this one, bathing in a tide pool, had opened its flowery tentacles in hopes of catching a bite to eat. 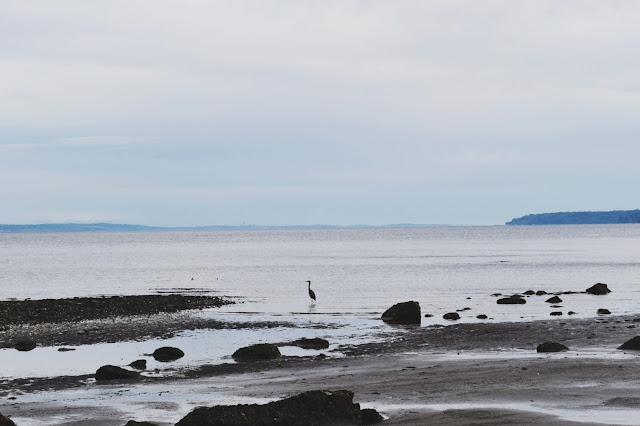 ^ And we saw birds. Ducks and seabirds bobbed lazily on the waves, much to Gracie's fascination. Herons stood patiently, occasionally curving their necks into a perfect S as they bent down to snatch up a fish. A trio of golden eagles swooped and circled directly over our heads.

In a snap, we were back at our car, shaking heavy wet sand off our shoes, enjoying our picnic lunch, watching our dog drink water like it was going out of style.

We packed ourselves back into the car and, with our thirst for adventure happily satisfied, headed back to the ferry. 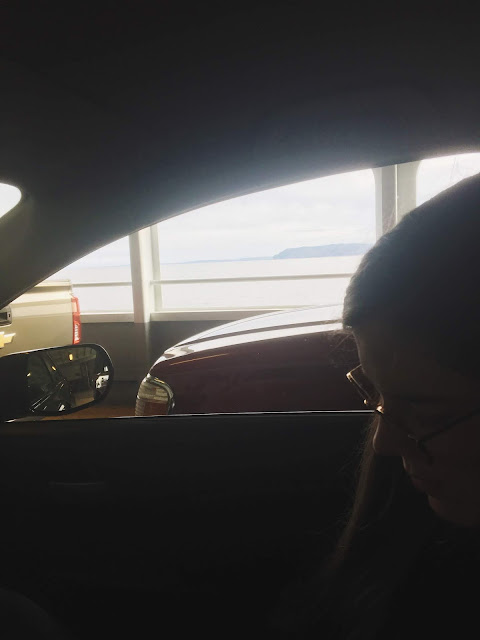 And this time, no one wanted to get out.

With Peace And New Beginnings
Heidi And I Go For A Walk
We Both Like Whidbey
The Last Day Of My Summer Vacation
Walking On Rialto Beach
Double Bluff Beach
Hiking At The Beach
Posted by Diane Streicher @ Diane Again at 3:29 AM