Silly me. I assumed that Cuba's Plaza de la Revolucion - the central government complex in the capital city of Havana - was the brainchild of Fidel Castro, built as a self-congratulatory monument to his 1959 coup.

But it turns out that isn't exactly true

After my rainy drive-by through the heart of the plaza yesterday, I got curious about its origins and sorted through a few Wikipedia articles to gather some facts.

The name of the plaza does indeed reflect Castro's dubious achievement and dictatorial takeover of the nation.

But the square itself, the government buildings scattered around its edge, as well as its most commanding monument,  have nothing to do with Mr. Castro. In fact, they were conceived in the 1930s and completed by 1959, the year of his Cuban Revolution.

Here's a basic lay of the land at this iconic Cuban landmark: 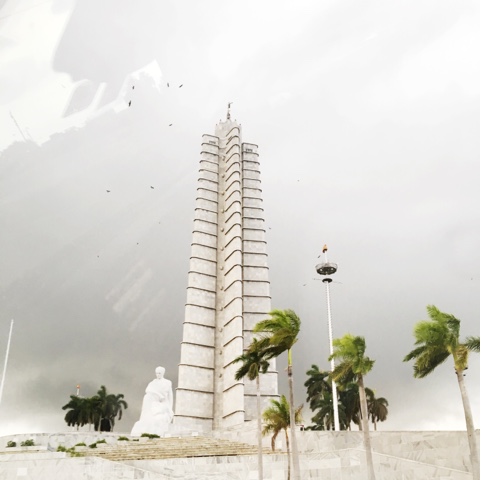 ^ The square - a large, open cement tarmac- is dominated by the Jose Marti Memorial. Rising 358 feet from a hill on the west side of the plaza, the star-shaped marble tower has bragging rights as the tallest building in Havana.

Mr. Marti was reportedly a man of many talents: poet, journalist, philosopher, political thinker, professor and all-around national hero from the late 1800s. He earned his countrymen's admiration and allegiance by leading the fight for independence from Spain, and is considered one of the great turn-of-the century Latin American intellectuals.

Seems like a stand-up guy to me. But let it be noted that he died decades before Mr. Castro was born. Their paths never crossed. 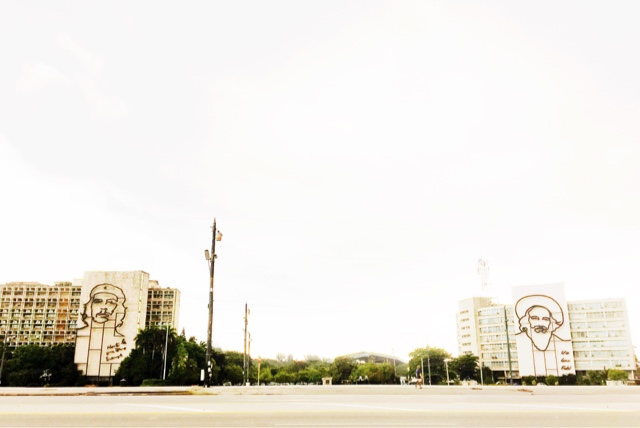 ^ Across the square, added years after the plaza was completed in '59, are the two famous steel portraits of other Cuban heroes.

On the left: Che Guevara, who is both loved and hated but always remembered as an Argentinian Marxist, guerrilla freedom fighter, and outspoken proponent of Third World insurrection. He fought at Castro's side during the Cuban Revolution, and met his end in Bolovia where he was executed for fomenting rebellion there.

In his time, El Che was something of an international badass and his colorful reputation still stands today as contentious, countercultural, and effortlessly cool.

The quote next to his inage reads, Hasta la Victoria, Siempre (Until the Everlasting Victory, Always.)

And over there on the right, Camilo Cienfuegos was a homegrown Cuban revolutionary talent, guerilla strategist, and military wunderkind. He died in a late-night private plane crash that may or may not have been sabotage.

Either way, the mystery lends itself to Mr. Cienfuego's fiery inage as a hero of the Revolution.

His quote reads, Vas Bien, Fidel (You're doing fine, Fidel,) a curious attempt to either mollify the Cuban people or perhaps comfort their quirky leader.

So in a nutshell, the Plaza de la Revolucion had precious little to do  with the true revolt. Fidel Castro commandeered the recently-completed central office plaza along with the rest of the Cuban government at gunpoint, and later added a few oversize portraits of his larger-than-life right-hand men.

And while Mr. Castro's new name for the place lifts up his contribution to its history, the true tale of the Plaza de La Revolucion tells a  richer, more complete story of this tiny island's troubled past.