In case you missed it, August 8 marked the forty-ninth birthday of the Association of South East Asian Nations, a strategic alliance among eleven nations in that region. As the Ambassador to Malaysia, my host led the celebration for all the member nations here in Cuba.

I personally have never been to an ASEAN birthday celebration before, so I was quite interested to see how it would shake out. 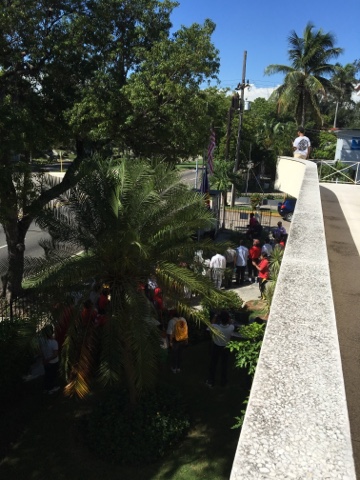 ^ My friends' second-born son was enlisted to take aerial photos of the opening ceremonies from the balcony above. I was in charge of standing in the shade. 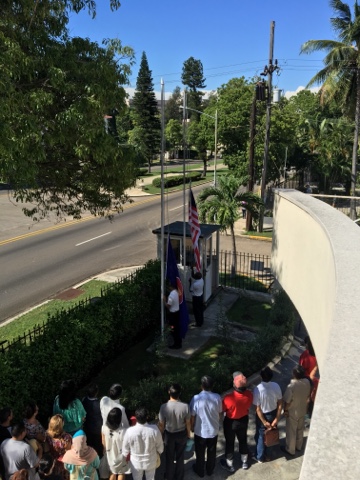 ^ Flag ceremony. Don't think I'd ever heard the Malaysian national anthem before. But now I have. 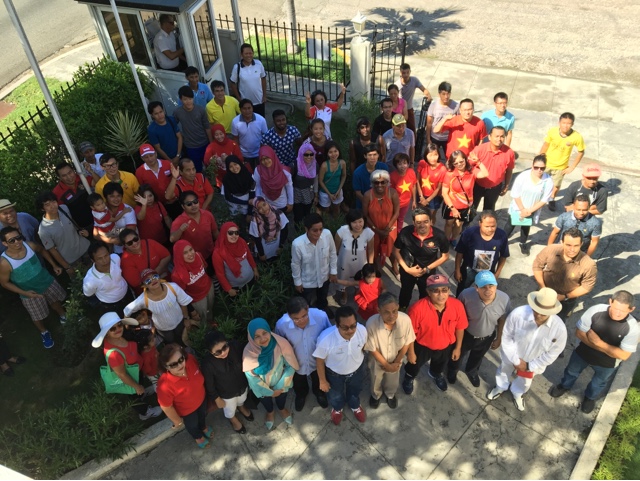 Yo! There's a white lady on the balcony?! Who let her in??

First and most formal were the opening ceremonies: flag raising, opening remarks from our ambassador, and a classic large group photo shoot.

From there, the party-goers divided into four teams and played a variety of outdoor games: musical chairs, relay races, that sort of thing. Prizes were awarded for everyone. Yay!

Then it was time to eat

Oh my goodness. Each country team provided a few national dishes and I was in pure culinary heaven. Turns out that the all-male group of ambassadors sit at one table, and their womenfolk, which included me, sit together at another.

Which is how I came to be addressed as "Madame America" by the wife of the Ambassador from Indonesia, and spoke a bit of Spanish with her counterpart from Laos, who can't manage English.

The event broke up with brisk efficiency after the meal, and we all moved on to the rest of our day. Still, the happy, cooperative, celebratory mood lingered through my afternoon.

Not sure what I'll be doing next year to recognize the fiftieth birthday of the proud ASEAN allegiance. But if I do nothing more than reflect back on these 2016 festivities, it will be a good day indeed.