Charminar: The Mosque And The Monument 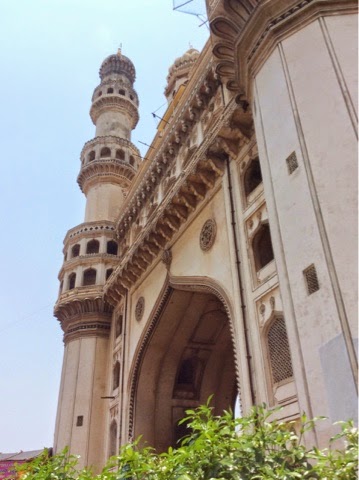 Deep in the city of Hyderabad, India lies an ancient riddle. 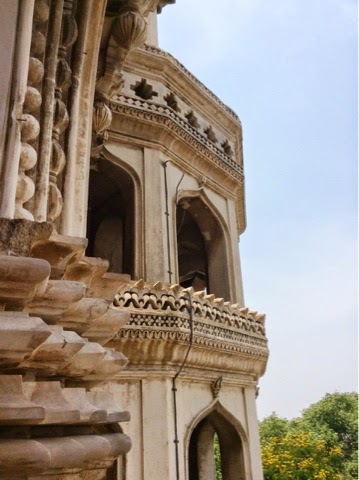 All can agree that this old mosque and monument was built in 1591 and has long been famed for its Islamic architecture. So also can we agree on the meaning of its name, which literally translates as "Four Towers." 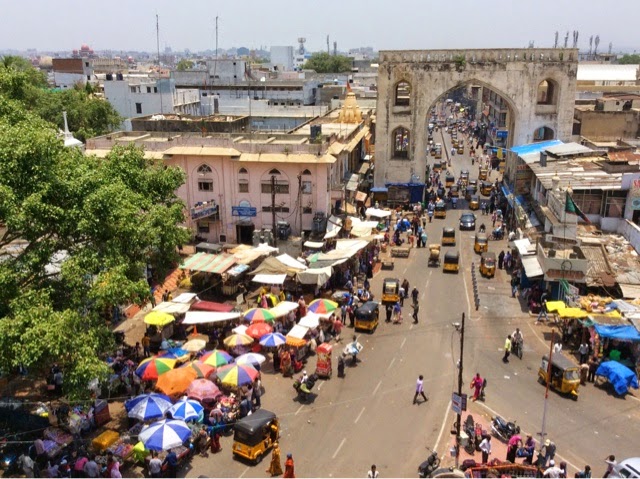 But what exactly was this richly ornamented icon built to commemorate?

And no living soul knows for sure. 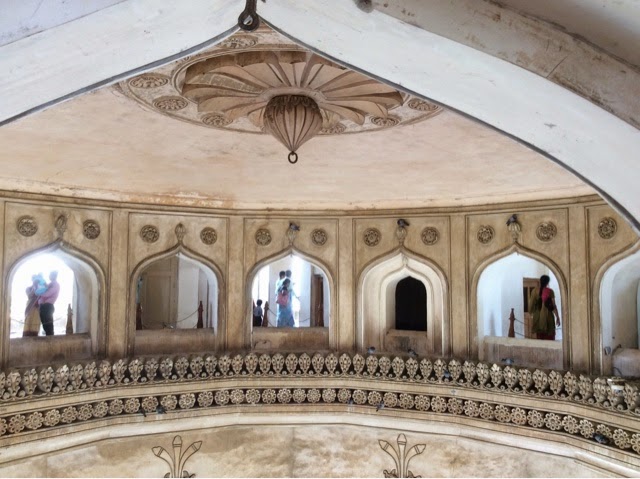 But the most widely accepted explanation is that Charminar was built as a monument to the eradication of the plague. It seems that the Islamic leader of the city was desperate for an end to the disease that was running wild through his city, and while praying one day for God's deliverance, promised to build a mosque on the vert site of his prayer if only God would lift the curse.

Interestingly, I had a similar if extremely personal version of this dilemma during my visit. 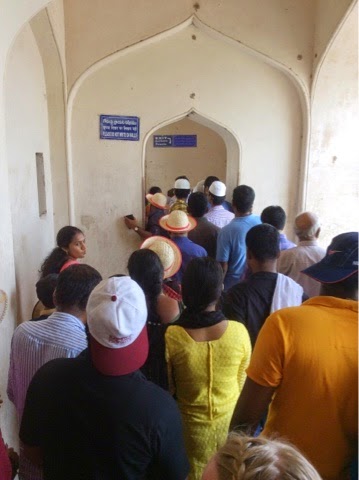 Our adventure at Charminar started innocently enough. My host, Natalie, three fellow volunteers, and I climbed the narrow, winding stone stairs to the upper floor, and spent a good thirty minutes happily exploring and snapping photos.

When we were ready to leave, we found the exit stairs and joined the throng of fellow visitors who were bunching up and slowly moving toward the overcrowded stairs. As we waited, my American sense of personal space was obliterated. Indians packed us in on all sides, pressing aggressively closer as we neared the entry to the dark, tiny staircase.

Suddenly, I imagined what I would experience when I finally got to those stairs.

The crush of bodies behind and ahead of me.
My stumbling feet on the deep, uneven stone steps twisting round and round.
The overwhelming smell of humans.
Hot, stifling air.
And darkness. Almost total darkness.

In an instant, I experienced a full-on claustrophobic panic attack. 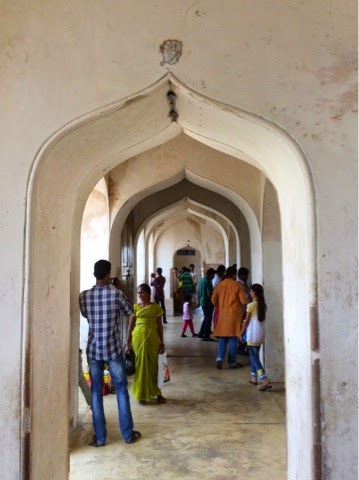 I'll be honest, I was wholly terrified. 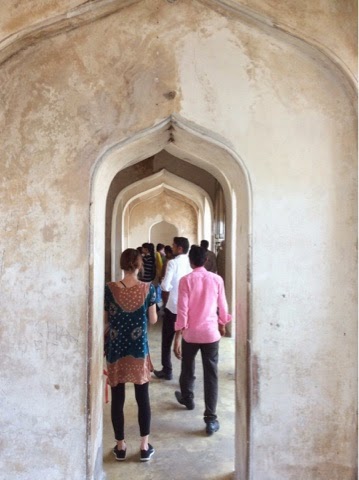 With a racing heart and lungs gasping for breath I asked my companions to jump out of line with me. We retreated from the worst of the crowds and took refuge in an empty archway.

Dangerously close to fainting, screaming in terror, or both, I asked them to pray for me.

But I was still barely able to compose myself. And as I sat on the ancient stone floor, watching the crowds continue to jam up against that narrow opening that led to the safety of the ground floor, I knew I would not be able to face those stairs. 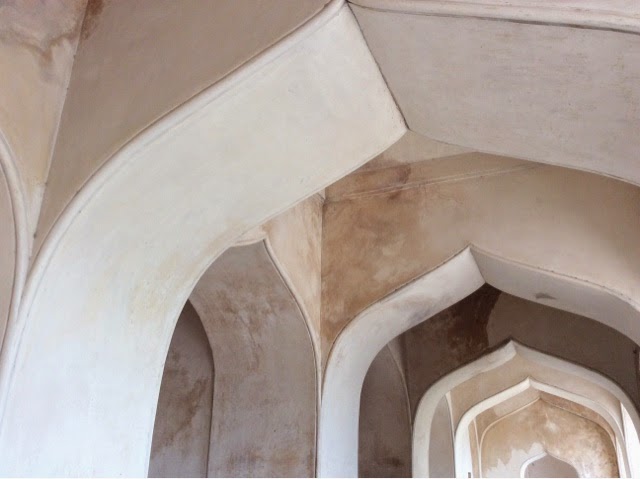 I prayed in total desperation. God, get me out of here. .

And I was still terrified, through and through.

But in a flash, I had a new thought. 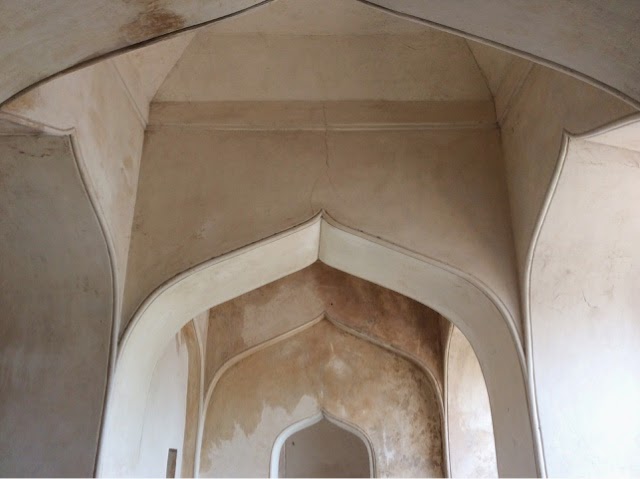 There must be another staircase. Those medieval Muskims dearly loved symmetry, and undoubtedly they would have built a staircase in each of the four towers. The modern day security team surely must use at least one for their own private access, and maybe they could be persuaded to take mercy on a feverishly frantic American.

Natalie graciously headed off to talk to a security guard. And within moments, a security supervisor wearing a purple sari was holding my hand as she led me and my companions down a dark and winding but entirely private staircase. 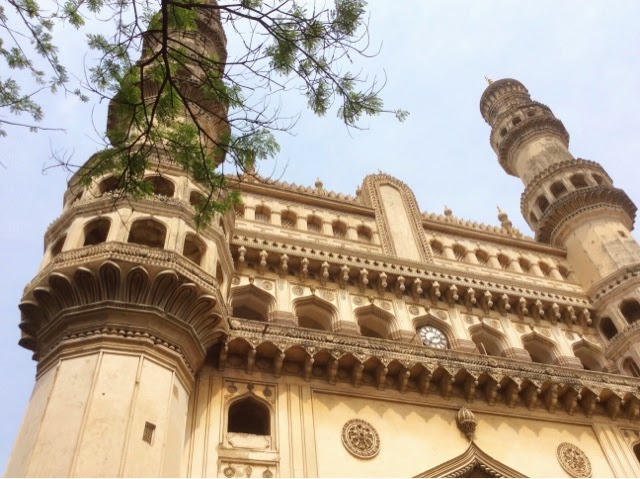 When I reached the open courtyard on the ground floor, my relief was overpowering. I fought back tears as I thanked God for safely leading me out.

And while I could not promise God that I would build a monument to his goodness in my time of desperate need, I did vow to share my story with anyone who would listen.

So thank you for reading along.

Here is the full story of my trip to Hyderabad, India and my visit with the Indian Princesses:

Under The Same Sun
Indian Princesses
Art Is Art
Puzzles
Primary Colors
A Meal To Remember
Do Hard Things
Rooftop Supper
Getting There
Trust Me, This Will Work
On The Balcony
At The Market
Content
Water And the Word
Sanctuary
Walks In The Sun
Playing With Sticks
Indian Sunset
Charminar: The Shops
Full Circle
Oh So Special
Priyanka And Me
Together
Three Fantastical Deserts
Three Things About India

Posted by Diane Streicher @ Diane Again at 11:33 AM

Email ThisBlogThis!Share to TwitterShare to FacebookShare to Pinterest
Labels: Art and Architecture, Synchronicity, Travels Near and Far