Life Of A Math Teacher: Number 15 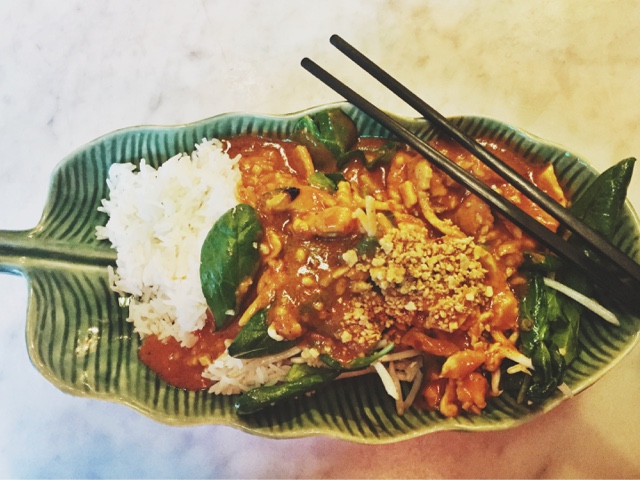 This dish is more commonly known as Swimming Rama but in my heart, it will always be Number 15.

When a college calculus professor takes a firm stand on Thai food, you know he's going to command my full attention,.

It's not often that such a serious scholar would take time away from his lecture notes to discuss such trivialities as food. But this man clearly felt so strongly about Asian flavors that he brought up the topic not once or twice, but at least a half dozen times during the quarter.

Wasn't even my professor. My third-born brought reports home to me of this math teacher who regularly interrupted his heady explanations of integrals and derivatives with a recurring side note about one Asian dish in particular.

"You have not lived," he pronounced, "till you've tried the Number 15 at Thai Tom's on the Ave."

(Isn't that just like a mathematician to remember the dish by its number.)

Well. As a math teacher who loves to deliver a few passionate side stories of her own, I took this recommendation very much to heart.

I decided that I must taste this magical elixir for myself.

the restaurant is tiny
the service is sketchy
your bill must be paid in cash
and the waitresses will criticize the amount of your tip...and if you happen to look Asian, they will literally chase you down the street and try to make you tip them more,

I was most definitely not disappointed.

Now, every six months or so, whenever I am holding midterms or final exams for my own math students, I find myself craving a Number 15. And more often than not, I head down to Thai Tom's for a dish so delicious that math professionals cannot get enough.

And if that isn't praise of the highest power, I don't know what is.

Test Drives
Bringing Joy
Math By Phone
Yabba Dabba Do
Eccentric Connections
Math Mammals
Social Distancing
Playing With A Full Deck
The (Math) Joke's On Me
Sharing Life
Little Brothers
Sweet Inspiration
My Hero
What I Do
Number 15
Christmas Edition
3.1415926
Buy It And Burn It
In Honor Of James K. Polk
House Tours
My Deep Gladness
Isolating The Radical
By The Numbers
Teaching My Own: High School Art And Algebra

Thai Tom's is a hole-in-the-wall restaurant on the Ave in Seattle, and if you ever have the chance, go there. In the meantime, I highly recommend you read all about it.

Email ThisBlogThis!Share to TwitterShare to FacebookShare to Pinterest
Labels: Cooking and Eating, Inspired Learning, Travels Near and Far