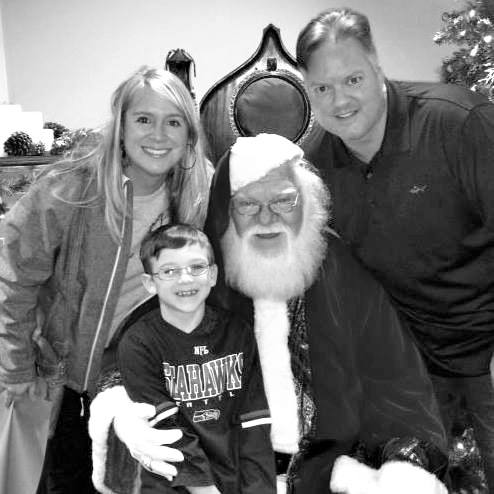 An adorable boy, surrounded by people who love him.

As I stepped into my student's home for our Tuesday algebra lesson, I was met with an interesting sight.

A seven-year-old boy in a fuzzy blue bathrobe buzzed like a bee at the far end of the dining room table. Scattered in front of him were a set of algebra workbooks numbered - you guessed it - from one to ten, and our hero was frantically arranging them in chronological order.

Dropping my bags at my usual seat, I walked down to Marshall's end to watch him work.

"I'm putting my brother's books in order," he explained.

"But you are still looking for number eight," I observed.

"Yes. Eight, eight, EIGHT!" He pulled the book out of the heap and waved it triumphantly.

"And here's nine...and ten!" Proudly, he fanned the books in sequential order but then a storm cloud passed onto his face.

As he scrambled through the neatly arranged books, checking and double-checking the number on each cover, I noticed that underneath the pile lay one last book, its pages opened and its cover hidden, mostly buried by the rest of the collection. Without comment, I pulled the top edge of the booklet up an inch or two to subtly make its presence known.

He noticed it right away. "What's THIS?" he burst out as he whisked the book off the table and flipped it shut to read the title number, all in one fluid motion.

As Marshall finalized his arrangement with a flourish, his fourteen-year-old sister and I exchanged a quiet smile and, assuming Marshall would soon be moving off to new adventures, we sat down together to begin our lesson.

But within moments, we realized that Marshall had other plans.

Seating himself across from me, with his sister sandwiched between us at the head of the table, Marshall ceremoniously opened up a three-ring binder that was literally bursting with a fresh load of loose-leaf paper, picked up a pencil and looked at me expectantly.

I smiled at him encouragingly then turned my attention to his sister and launched into my spiel.

Right away, I noticed him eyeing my box of colored markers. Moving them to within his arm's reach, I wordlessly invited him to help himself. Then I picked up one for myself and wrote at the top of my page:

I jumped into my lecture on the merits of the quadratic formula; from the corner of my eye, I noticed Marshall writing intently. After a few moments, he stopped and stared at me, clearly seeking my attention.

He silently turned his book round and presented it to me. Across the top of his page, marked in sturdy second-grade penmanship read "Lesson 119."

I fought back the urge to run around the table and hug him.

No longer feigning interest in his own calculations, Marshall simply sat and stared as we plowed on through our equations. He followed our give-and-take with rapt attention, and when his sister asked him to help us - "Marshall, what's two plus six?" - he practically sprang from his seat as he belted out the answer.

Right around this time, his mom popped her head into the room to deliver some news: "Marshall, you were too sick to go to school this morning but I think you're feeling a lot better now. So let's get you some lunch and I'll run you over to school for the afternoon."

But once Mom had disappeared back into the kitchen, he turned to his sister and me and confided, "I don't need to go to kid school anymore. I'm ready for teenager school with you."

I love teaching math. The calculations and computations bring me pleasure, and opening my students' minds to these puzzles and processes is sheer joy. This exciting journey and oftentimes considerable challenge is what gets us math teachers out of bed in the morning.

But to step into my students' homes and directly share in the ups and downs of their daily life - that is a special privilege and a blessing that few teachers get to enjoy. I never take for granted the intimate and personal connection that I make with my students and their families.

And while this story of a math-loving boy is delightful on any level, I want to share one more detail. Though he has been welcomed and accepted and loved as much as any son, Marshall is a foster child in this family. It's been just six months since he was taken from chaos and placed in this stable, loving environment, and to see him bloom and grow as he has just fills my heart with hope and joy.

I'm already dreaming of the day when he will be my student too.

Test Drives
Bringing Joy
Math By Phone
Yabba Dabba Do
Eccentric Connections
Math Mammals
Social Distancing
Playing With A Full Deck
The (Math) Joke's On Me
Sharing Life
Little Brothers
Sweet Inspiration
My Hero
What I Do
Number 15
Christmas Edition
3.1415926
Buy It And Burn It
In Honor Of James K. Polk
House Tours
My Deep Gladness
Isolating The Radical
By The Numbers
Teaching My Own: High School Art And Algebra
Posted by Diane Streicher @ Diane Again at 2:19 AM