"I often have deer on my property and there's a fox and owls. You're not going to see that in the city." -Billy Corgan

Somewhere around three thousand miles into our road trip, the happy day finally arrived that we rolled into Columbus, Ohio, burst into the door of my second-born's apartment, and settled in for a week-long visit.

Now there were a few days when she needed to work, and a brief jaunt over the weekend to Cleveland. More about that later.

But for three glorious mornings, we enjoyed marvelous mid-morning sleep-ins, and then headed out about town for breakfast and a bit of shopping. Early on, my daughter pointed out that her favorite coffee shop, Fox In the Snow, now has three locations. So why not visit a different location each day?

Why not, indeed. So here I present various and sundry scenes of our three mornings in Columbus. 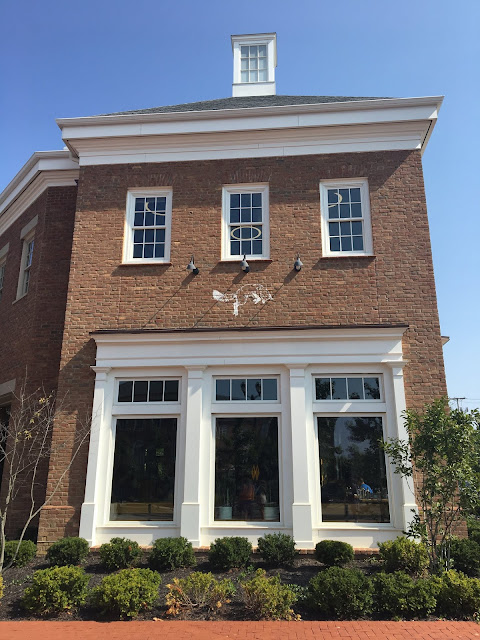 ^ The first Fox we visited was in New Albany, an idyllic planned community to the northeast of Columbus proper and just a hop, skip and a jump from my daughter's office. Colonial charm is the name of the game, with heaps of summer sunshine to spare. 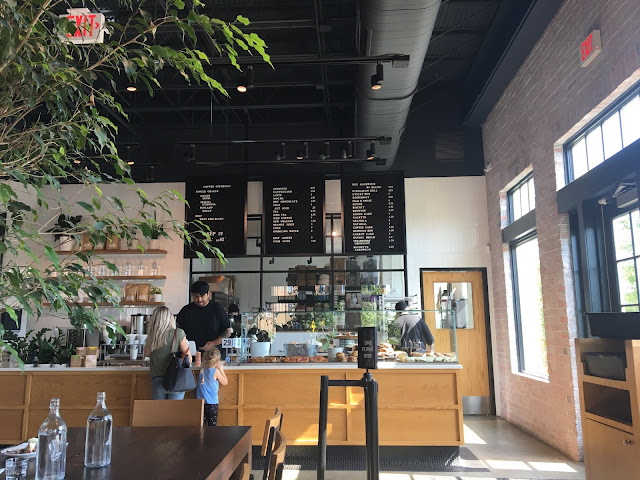 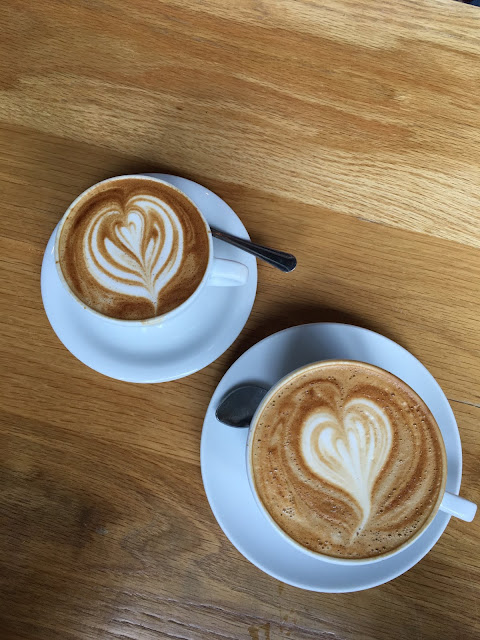 ^ I do not drink coffee, which is a ruddy shame when it's served up like these lovelies. I settled on a ham and cheese baguette with a side of Mexican Coke, and considered that the perfect start to my day. 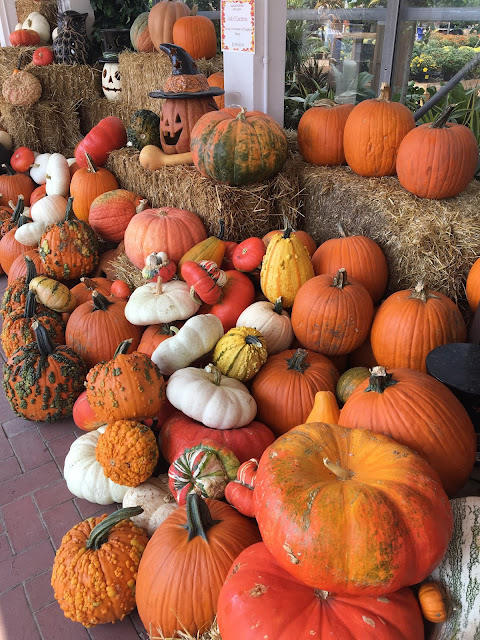 ^ Our errands on Day One took us here and there to various nurseries, so my daughter could track down a couple houseplants she was hoping to add to her collection. We got a bit sidetracked by this gorgeous wave of pumpkins, which were not on the to-do list but otherwise irresistible. 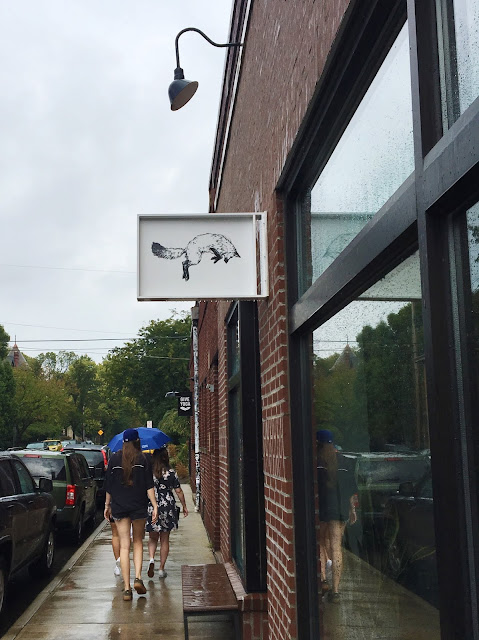 ^ Day Two saw us under drizzly skies in German Village, a Columbus neighborhood just south of downtown. Saturday morning saw the shop full of coffee daters and post-yoga snackers as well as our lot. 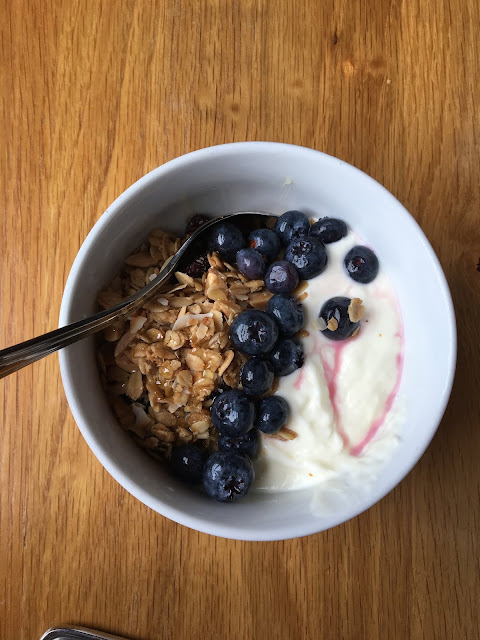 ^ Isn't that as pretty a berry bowl as you've ever seen? 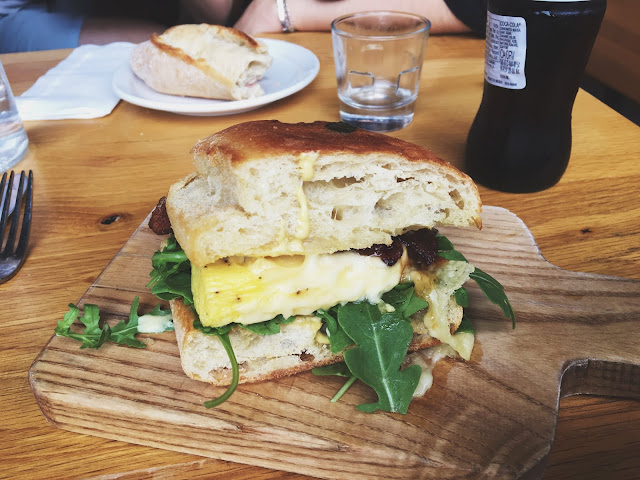 ^ My family continued to experiment through the pastry menu but I stayed true to my savory roots and chowed down on the Fox's iconic egg sandwich. I devoured every crumb. 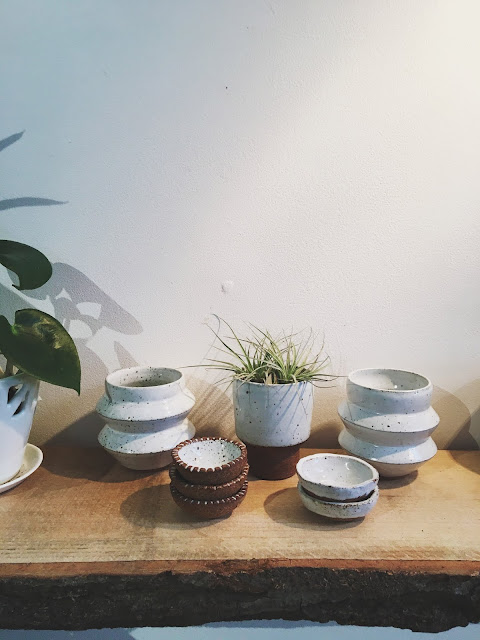 ^ Just a door or two down the street from Fox is another favorite Columbus destination: Stump. A plant lover's nirvana, every nook and cranny of this tastefully renovated home-turned-business is filled with carefully curated stands of hand-thrown pottery and plants galore. 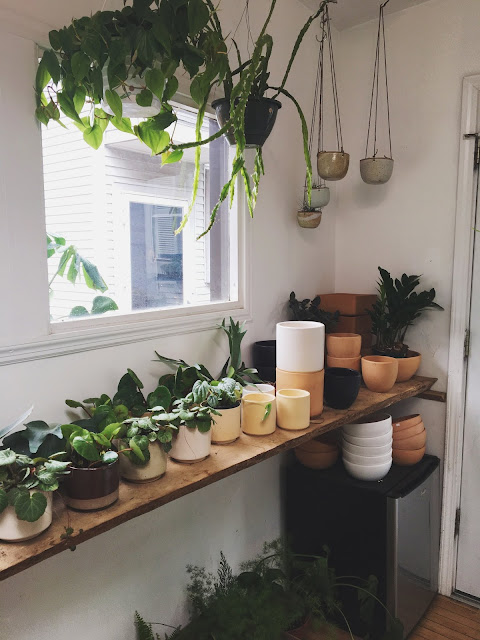 ^ I struggled to capture the magic that is Stump. Each vignette blends into the next, which is more than the camera can take in, and the overall effect is straight intoxicating. We spent a ridiculous amount of time wandering back and forth, just soaking up the ambiance. 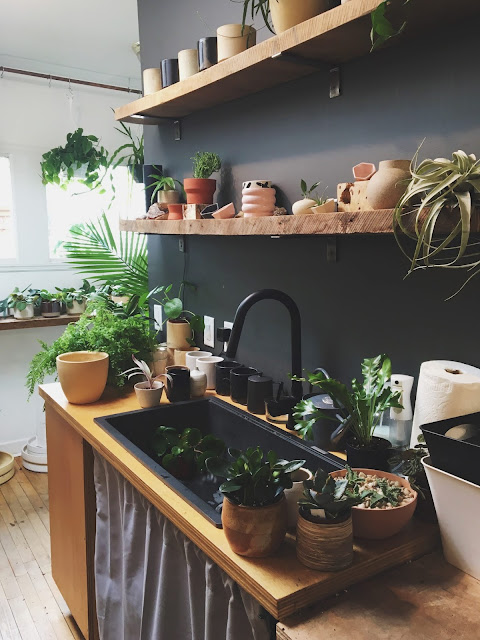 ^ Even the staff''s work area is adorable. The clusters of thirsty specimens, the black matte faucet, even the grey under-sink curtain scream with charm and style. 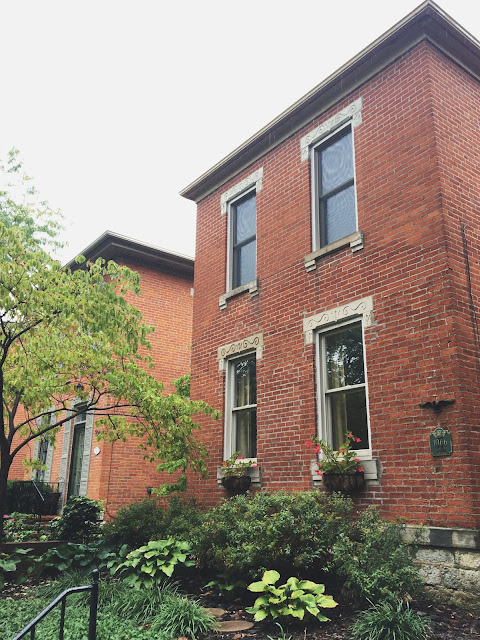 ^  Walking back to the car, we passed several blocks through a reinvigorated city neighborhood that sang with character and charisma. I would not be mad about living here. 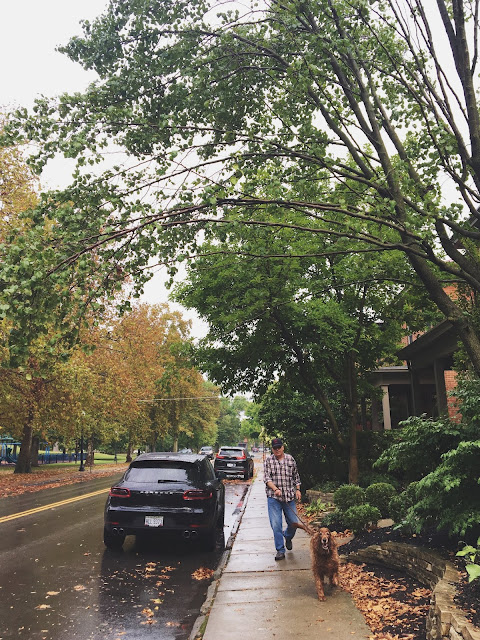 ^ But who's this friendly face racing toward me down the sidewalk? My husband took my dog round the park while my daughters and I shopped for plants, and Gracie was breathless to see me again. 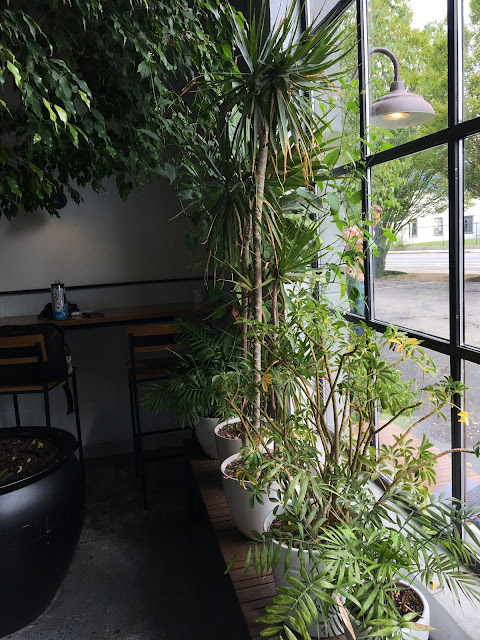 ^ For In The Snow, Day Three, got me grumpy from the get-go. Unquestionably my favorite of the three Foxes, I eagerly anticipated snapping a few choice shots of this exterior. Though the other two locations are new construction, albeit designed to look old, this third shop in Italian Village near the Short North is the real thing. Built, I believe, in an old mechanic's shop, the oversize windows and rattly old garage doors are to die for. But to my frustration, a young man was sitting on the bench out front, his laptop open, his Bluetooth device firmly planted in his ear as he paced back and forth, ranting in earnest to whoever was listening on the other end. There was no shooting around him, and apparently, there was no staring him down. Thank goodness I've visited this shop before and already took a round of gorgeous photos. 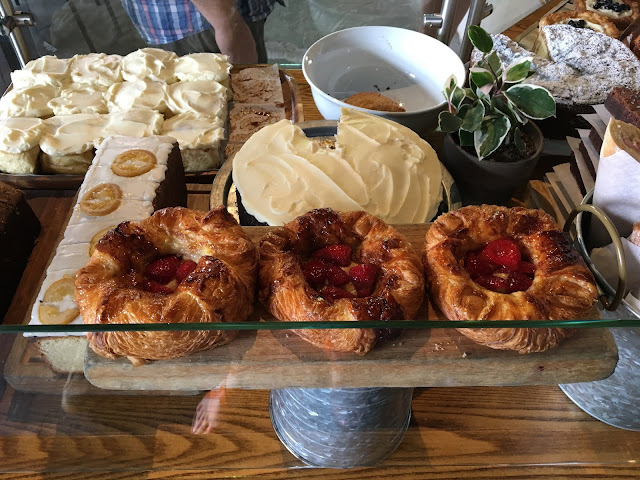 ^ Though they are quite simply by patisserie standards, I love the colors and textures of the pastries on display. 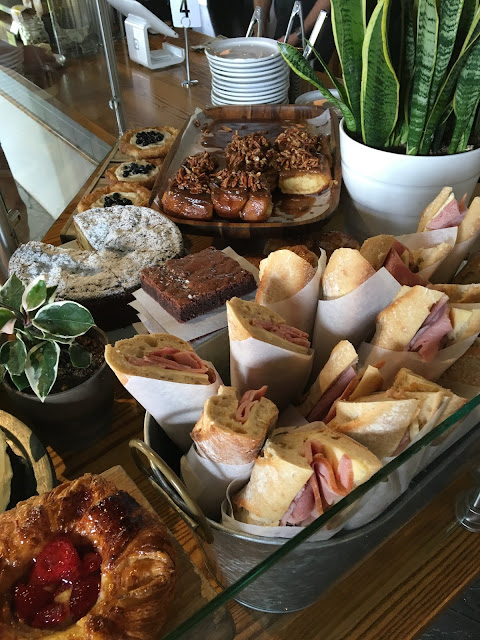 ^ Oh, here's a good look at that ham and cheese baguette I ate on Day One. Each of the three shops has the same menu, which makes decisions all that much easier. 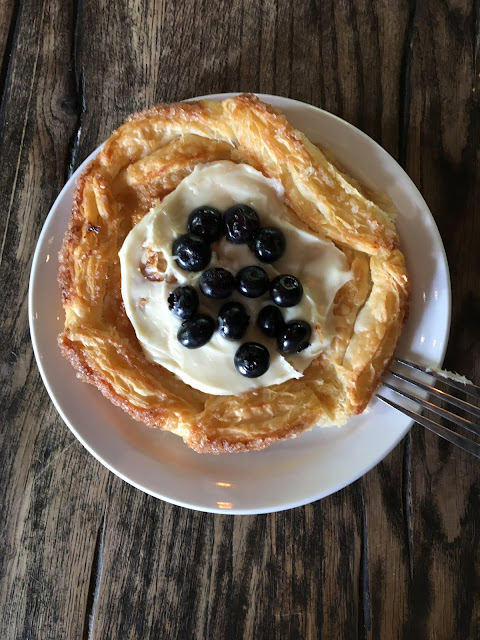 ^ Once again, my husband went for the blueberries and I got a pretty picture before he ate them. 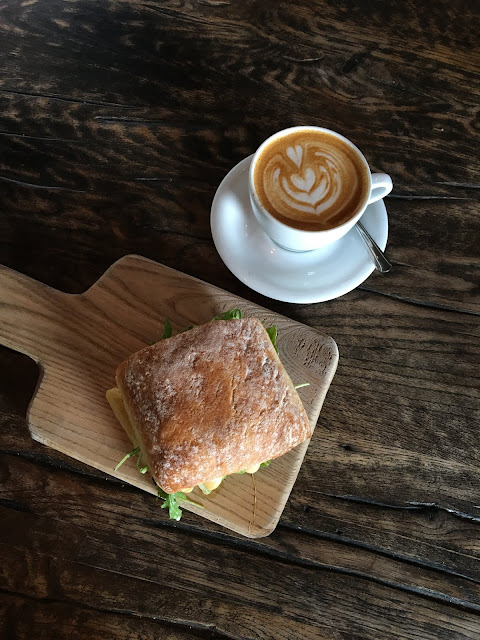 ^ And here's my egg sandwich redux sitting with someone else's latte. My Mexican coke is sitting just out of frame.

After breakfast, we drove on a few blocks to the second Stump shop, and saturated our souls with more gem-like houseplants in hand-thrown pottery and styled to perfection in a refurbished old house. And so, with complete and utter satisfaction, we concluded our lovely trio of Fox In The Snow adventures.

Email ThisBlogThis!Share to TwitterShare to FacebookShare to Pinterest
Labels: Art and Architecture, Cooking and Eating, Travels Near and Far