"Every time I'm on the mountain, I'm just so happy to be there." -Chloe Kim

And so it was with a heavy heart and a bittersweet lump in my throat that after our week-long visit, we said goodbye to my second-born, Ohio-dwelling daughter, turned the car west, and stepped on the gas.

Well. Figuratively speaking. Because my shoulder injury kept me out of the driver's seat for the entirety of the return trip so my foot never even got close to the accelerator.

But off we went, just the same, stopping on the evening of the first day in Olathe, Kansas, for a pop-in with my nephew. We chatted over heaping plates of Kansas City BBQ and ate ourselves silly. Restaurant Q39 serves up a mean plate of beef brisket and is definitely worthy of a return trip, though next time I will eat a full order of nothing but burnt ends. Pure heaven. 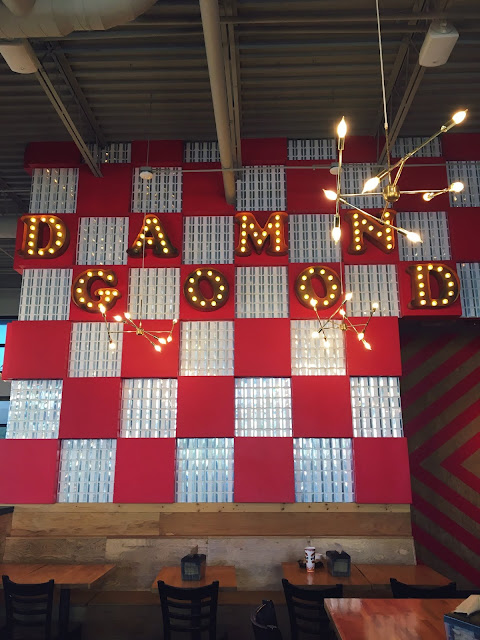 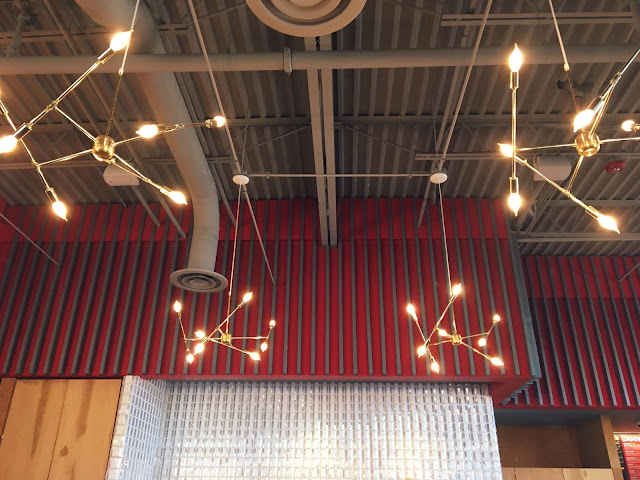 "Damn Good" tacos, and a not-too-shabby interior to boot.

^ In the morning, we were off once again, crossing the plains and climbing into the Denver suburbs for an early dinner at Torchy's Tacos. Taking a meal at this on-trend taco chain out of Austin came as a request from my fourth-born, and the rust of us were happy to oblige. 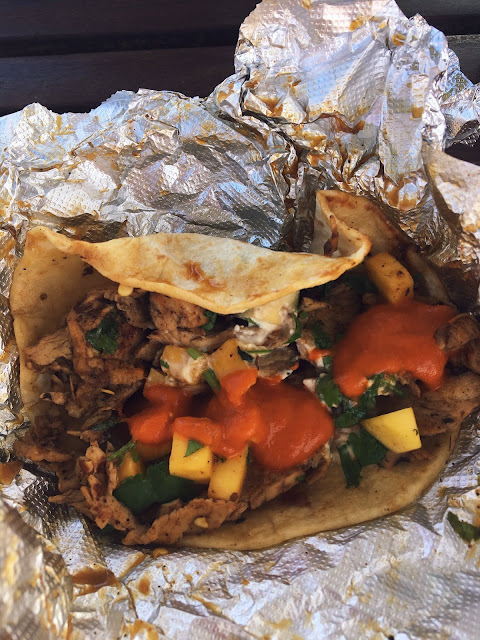 I don't really even remember what my tacos looked like but I'm pretty sure this was one of my daughters'. My mind was a total blur.

^ Much like our family favorite, Condado Tacos, in Columbus, Torchy's has an A-list of wacky taco combos that they have dreamed up and named, presumably, during a wild peyote binge. Alternatively, you can order your own combos off a list of ingredients but where's the fun in that? I chose the Trailer Trash and I "got it trashy," and the Brushfire which literally seared my sinuses. Okay, not literally, but what I'm saying is that sucker was hot. But still, nothing that a few sips of Coke and a liter of cold water couldn't cure, so I have no regrets. 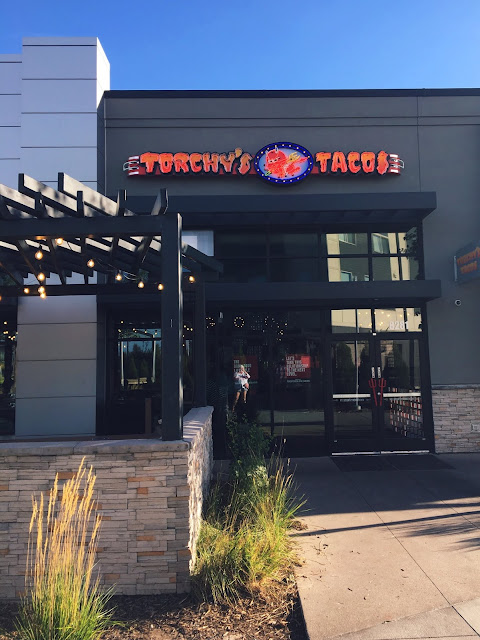 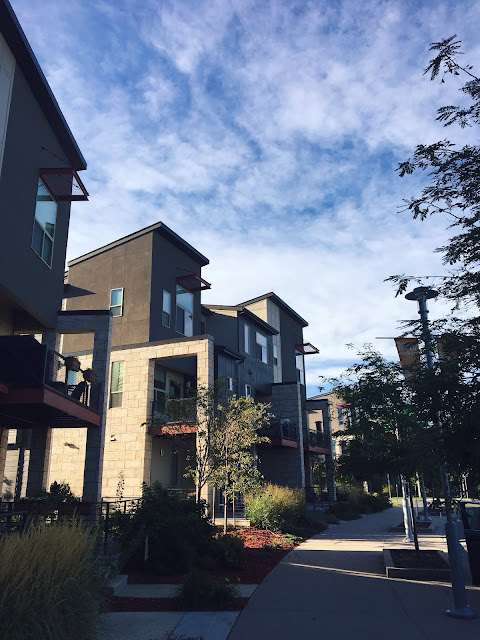 These two views were just a few steps apart. If I lived on the same block as Torchy's, I would eat a ridiculous number of tacos.

^ This particular Torchy's shop was tucked into a brand spanking new Millennial-esque community east of the city. Townhouses and apartments circled around a central green area overflowing with cuteness. Huge flower beds burst with native displays, wandering sidewalks were just right for entertaining a wound-up Irish Setter who'd spent the day in the car, oodles of benches and tables invited us in for a meal, and my favorite - a splash pad slash water feature that turned a hot Denver evening into a water party. A perfect oasis for the weary traveler and hungry taco enthusiast. .

Our tacos were soon eaten but our travels for the day were not over yet. We caught the tail end of rush hour as we climbed west into the mountains, doffing our caps to Red Rocks Park and grinding up into the Rockies. 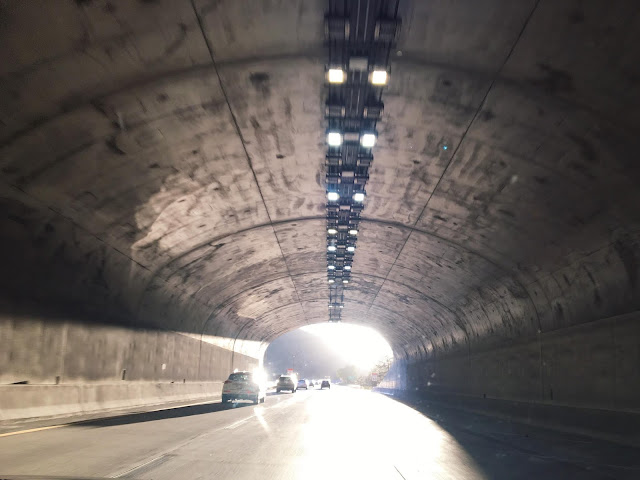 ^ Passing under the Continental Divide, the Eisenhower Tunnel is long, high, and steep as a mother bear.

Now I'm no stranger to punishing mountain grades. I haul myself back and forth across the rigorous Seattle area passes on a regular basis, including the notoriously dangerous climb up to Stevens Pass that I've done literally hundreds of times in the name of good skiing. And on our annual road trips across Idaho, Montana, and Wyoming or south to Oregon and California, we push ourselves up and down extreme grades several times a day. I am not easily fazed by a mountain in my path.

But following Interstate 70 west out of Denver is always a wild ride. The inclines are steep, the curves unforgiving, and the traffic, whipping back and forth across multiple lanes, is chaotic. Given my nerves of steel, I typically drive this section of our travels, but this time - due to that bum shoulder of mine - I was forced to sit back and stomp on my invisible brake pedal as my fourth-born held the actual wheel in her competent hands. I quickly decided that it was in everyone's best interests for me to focus on the scenery instead. 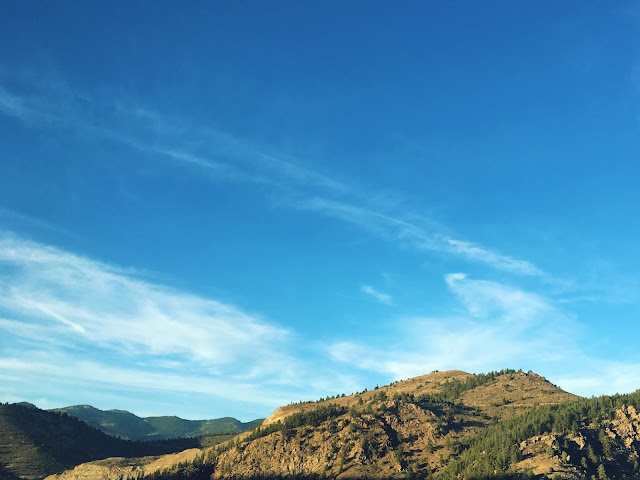 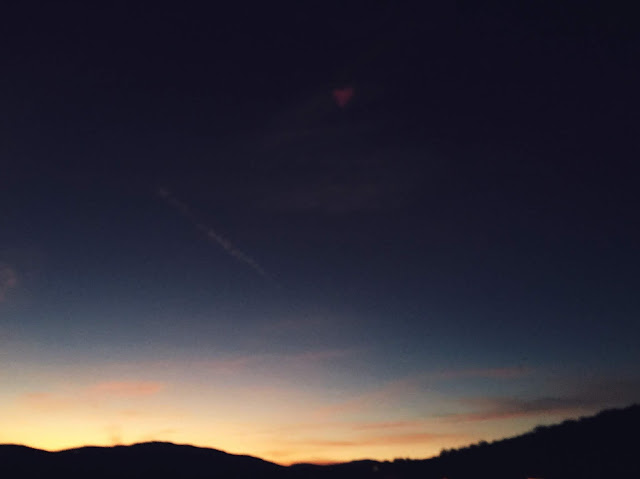 ^ And so passed several beautiful hours as we rode through the Rockies and down into Rifle where we stopped to sleep for the night.

Email ThisBlogThis!Share to TwitterShare to FacebookShare to Pinterest
Labels: Cooking and Eating, Travels Near and Far