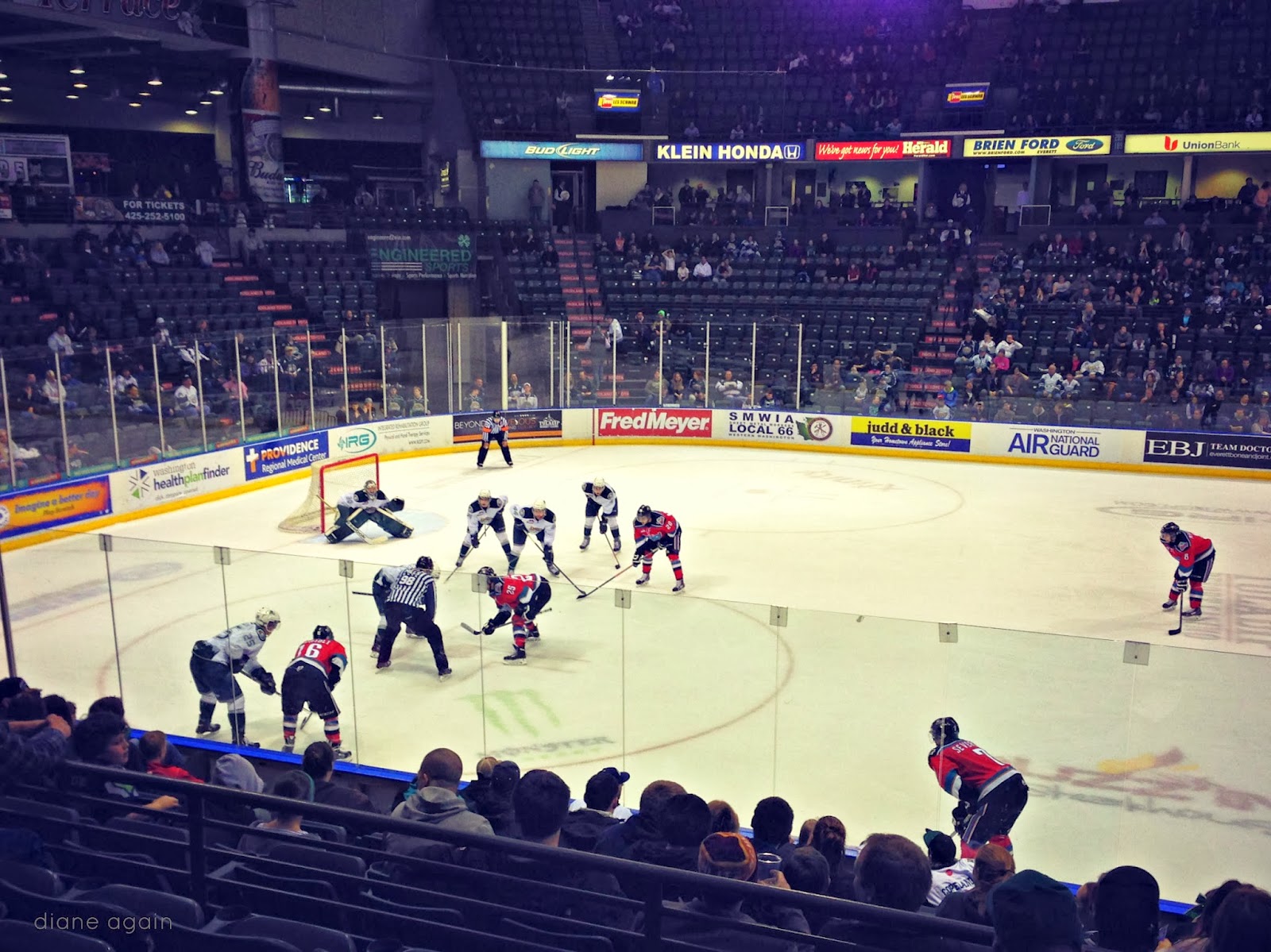 Last night, I went to a Silvertips hockey game.

As always, I fell under the magical spell of the sport.While hockey has reputation for brutal physical contact that often boils over into fighting, I can find many moments of gracefulness and subtlety mixed in among the fist fights.

The players gliding across the ice, smoothly, noiselessly, seemingly effortlessly.,
The delicately curved sticks lifted above the players' heads, waving like flower stems in a breeze.
The sturdy little puck gracefully that slips and slides across the ice, and rolls and flies through the air.


In hockey, a face-off is the method used to begin play, where the puck is dropped between the sticks of two opposing players by an official.

In the moments just before the official drops the puck onto the ice, the whole stadium seems to hold its breath. On the ice, all twelve players freeze into their places; riveted and tense, they almost twitch with anticipation, and we all know that they are about to explode into action. The build-up is almost intolerably exciting, and I savor that feeling of impending excitement and energy.

While I was enjoying the game, my husband was at home, reinstalling the sink and stove top that had been removed for my concrete kitchen counter project. After three long weeks, the hard work was over, the fully sealed and cured counter tops were good to go, and my kitchen was finally coming back together.

As soon as I got home from the game, I would finally, FINALLY be ready to reload the contents of the cupboards, which had been exploded all over my house for the duration of the project, and style up my newly renovated space.

During those final hours of waiting, as I watched the Silvertips skate their way to an easy 5-1 win, I felt just as if I was holding my breath. Frozen in my seat at Comcast Arena, I was preoccupied with thoughts of what was happening at home, and jumpy with the excitement of knowing that very soon, I would be exploding into action and working away into the long hours of the night to put my spiffy kitchen back in order.

The build-up was almost intolerably exciting. A break-down of my kitchen upgrade adventure:

DIY Concrete Countertops: A New Hope
Love The One You're With
Pay Dirt
Powering Through
The Home Stretch
Getting Stuff Done
Home Tour: Going My Own Way

Gomo Kelate Gomo!
GKG Glory
Take Me Out To The Ball Game
Take Me Out To The Crowd
Buy Me Some Peanuts And Cracker Jack
Sticks And Stones May Break My Bones
My Outing With Pjoe And Amy
As American As Apple Pie
#yolo
Hello At Last
My Twelfth Men
Tonight Is The Night
Posted by Diane Streicher @ Diane Again at 11:42 PM

Email ThisBlogThis!Share to TwitterShare to FacebookShare to Pinterest
Labels: My Home and Garden, Travels Near and Far