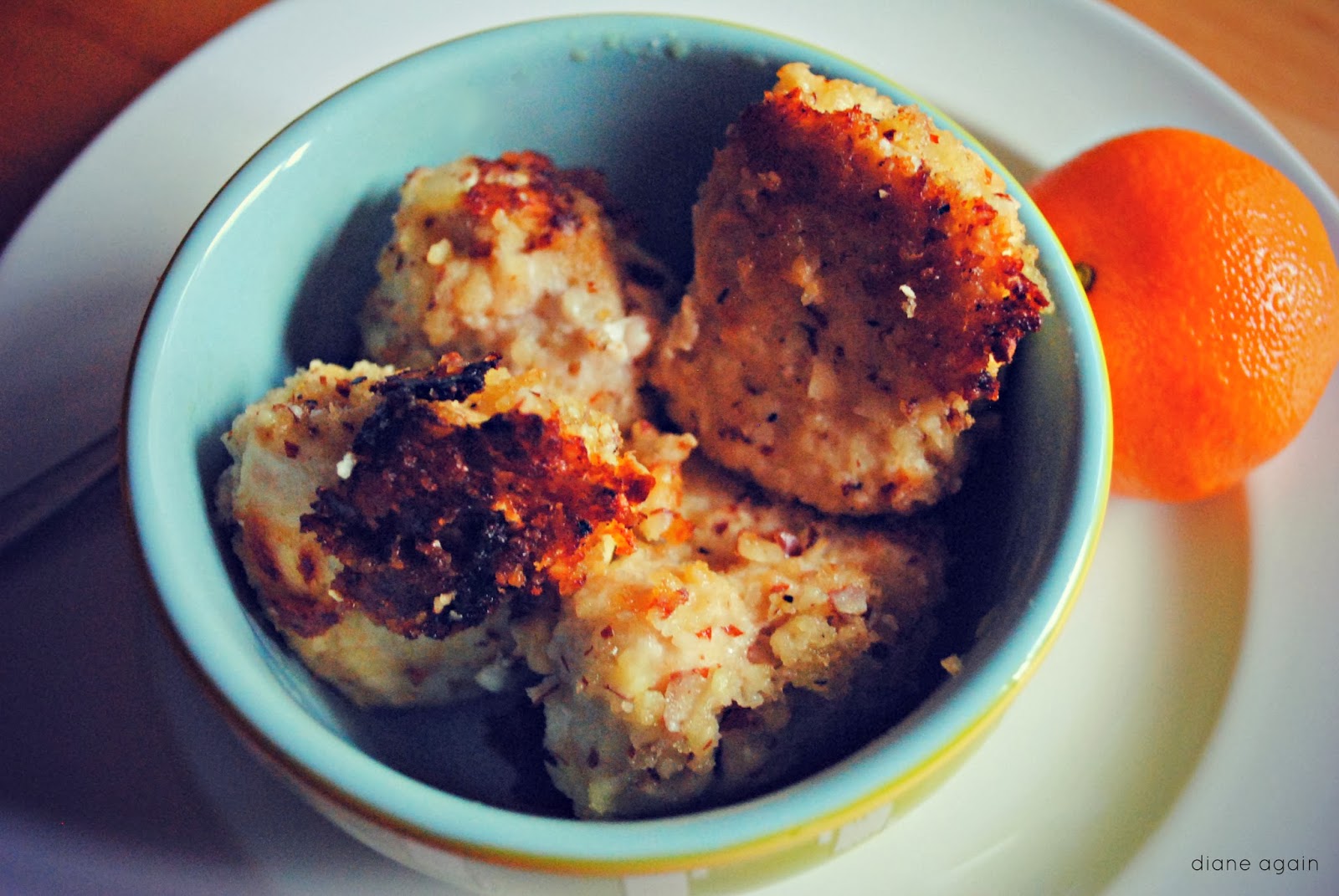 I want to love chicken nuggets. Truly, I do. What's not to adore about a crispy bit of hot chicken, ready for a quick dunk in some delicious sauce and then straight into my mouth?

Such a genius idea.

But the sad truth is that I just don't love store-bought versions of this tasty treat, or even the granddaddy of them all, the McDonald's Chicken McNugget.

So I do what must be done. I make them myself.

Technically, my finished product is not all that nugget-y. It's more of a Parmesan Chicken kind of thing. But my intentions are all nugget.

My ingredients list for a personal batch of crispy heaven: 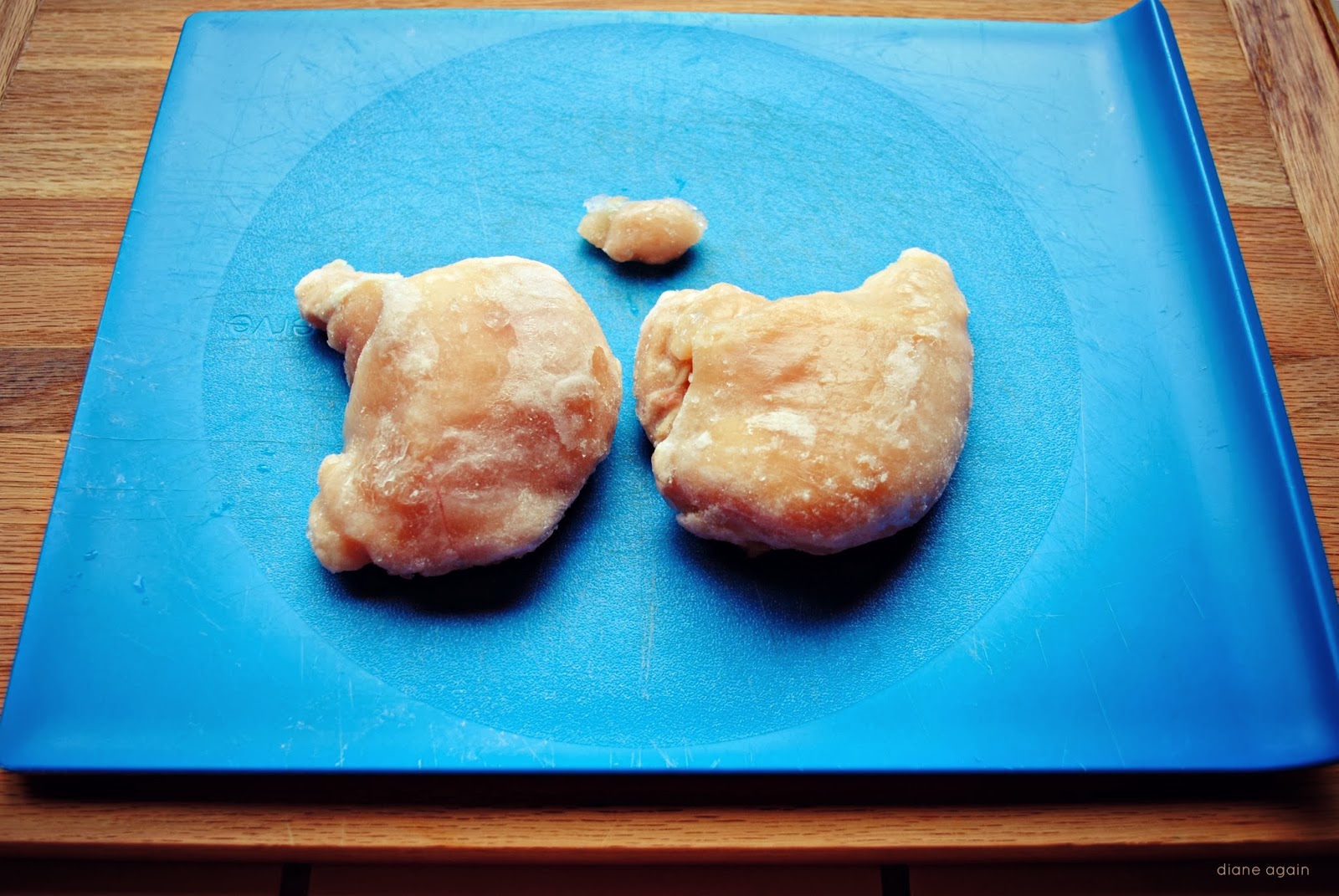 ^ Frozen chicken breasts are one of the great advancements of the human race. I keep a bag in my freezer at all times, as a fail-safe dinner option and desperation no-carb snack. Just one minute in the microwave will render two frozen breasts ready for my knife - soft enough to cut but still frozen enough to keep all the juices intact. 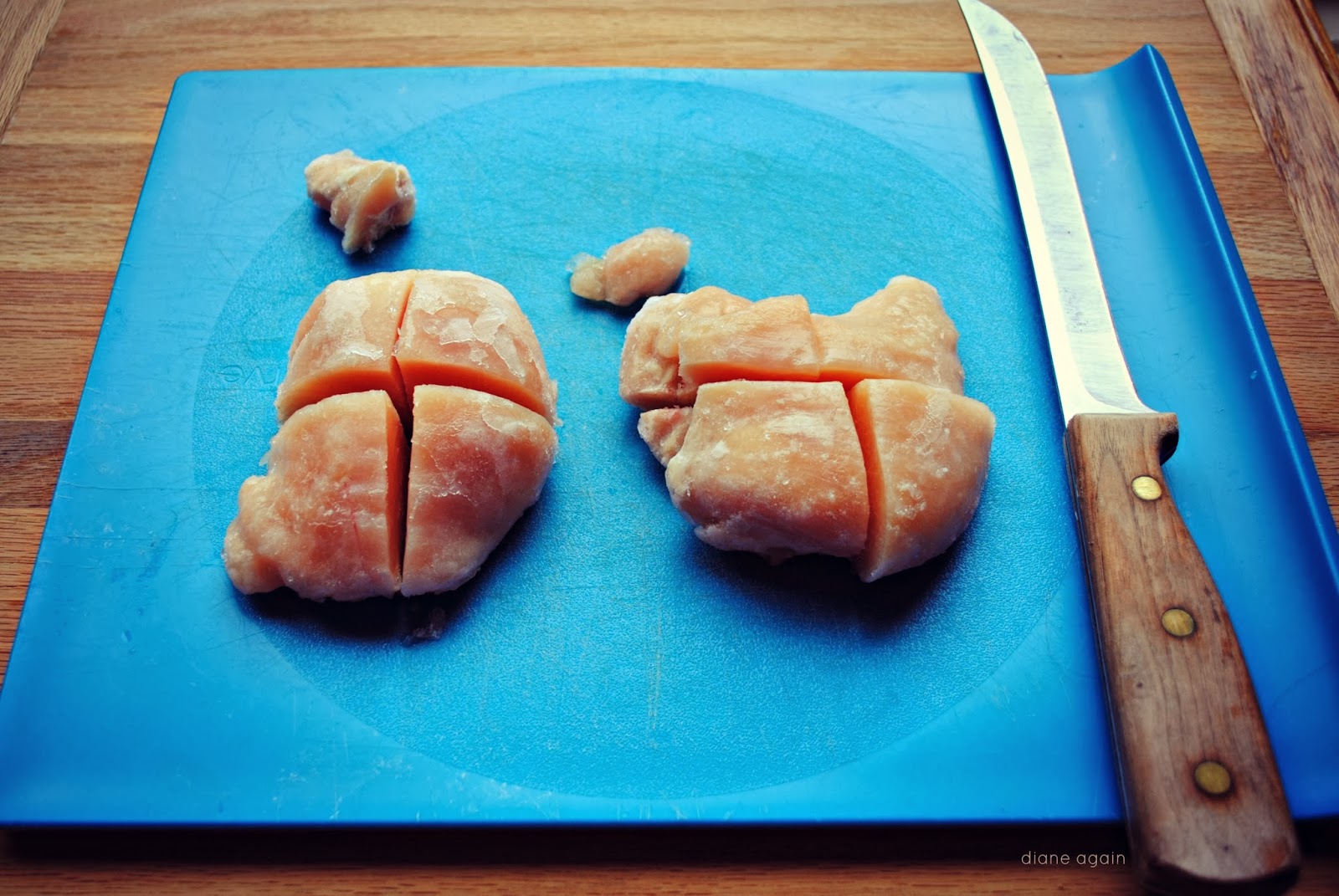 ^ Ka-THUNK. A few quick swipes with my knife and I've got eight nuggets ready for action.

Oh. See those two little nibs of chicken? Those are going to become my tasting portions. Little tidbits that I, as top chef, get to sample and savor at the end of the cooking process. After decades of dinner duty, I've learned to give myself some perks. 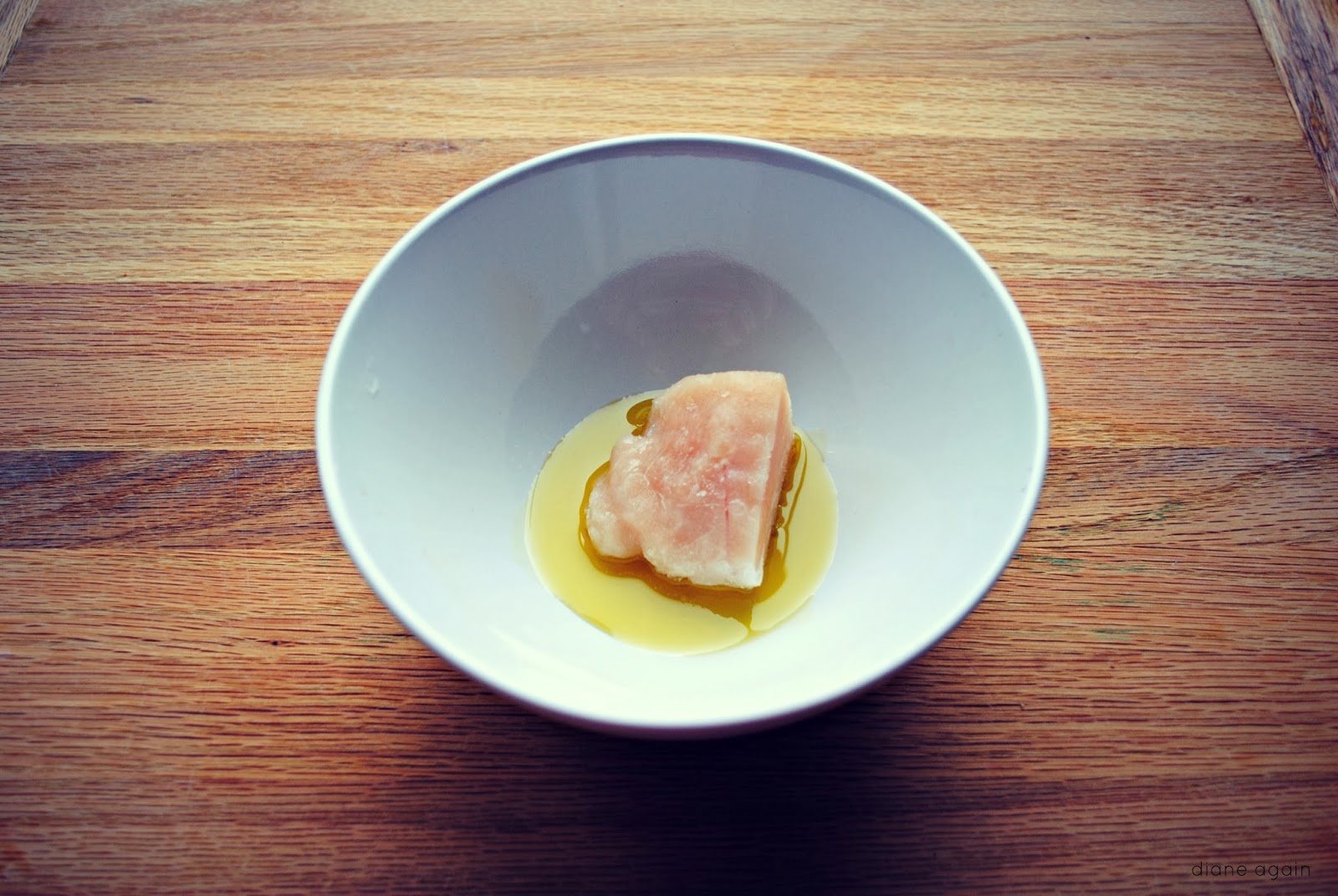 ^ Once cut, each nugget (and tasting portion) gets a quick splash through the olive oil... 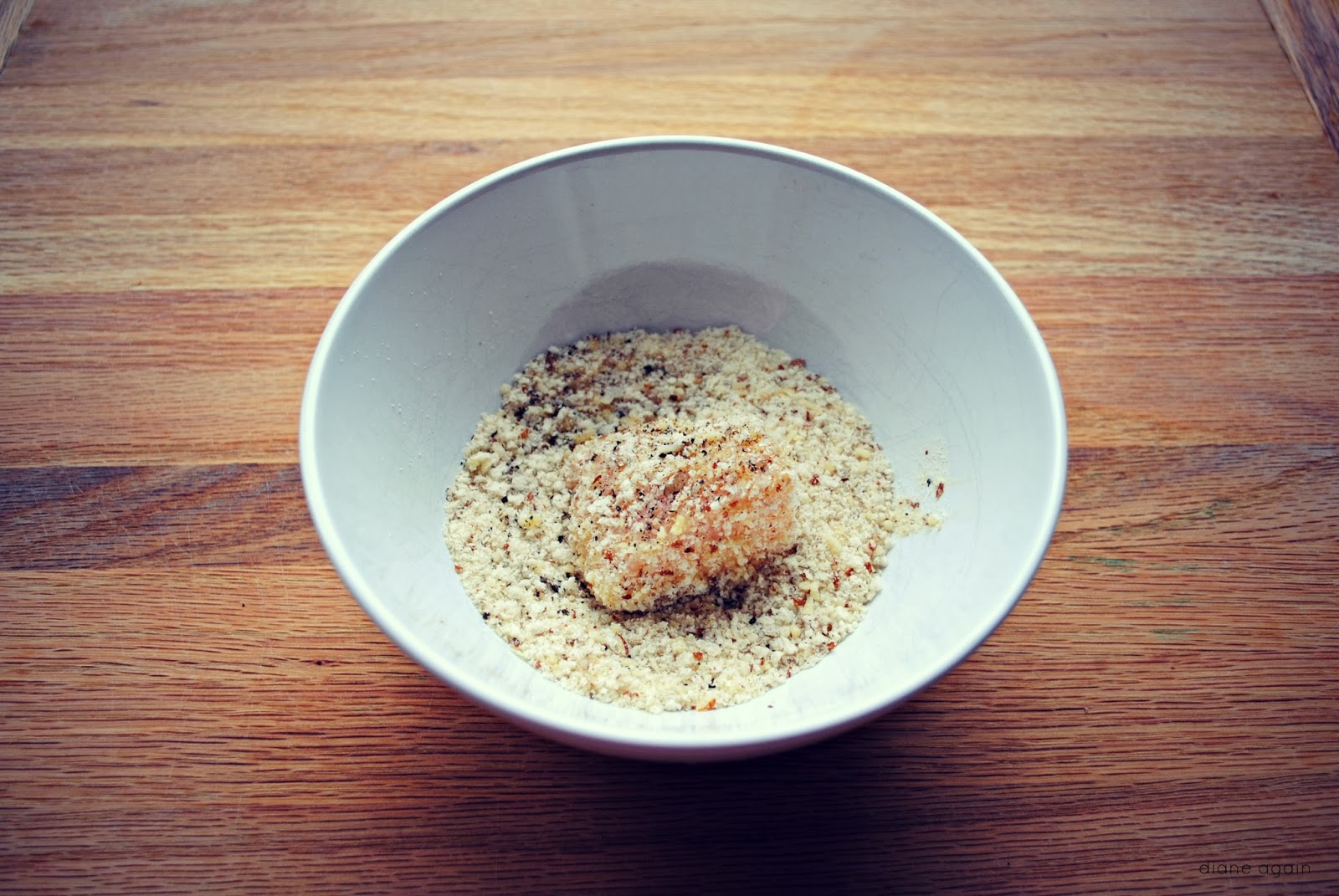 ^ and several turns through the mixture of cheese, ground almonds, bread crumbs and seasonings.

I used to use only Parmesan cheese and bread crumbs but in this new age of carb-free dining, I have changed things up a bit. The ground almond provides extra crunch, and I cut way back on the bread crumbs. Sometimes I leave them out altogether, but a tiny splash of them won't hurt me. 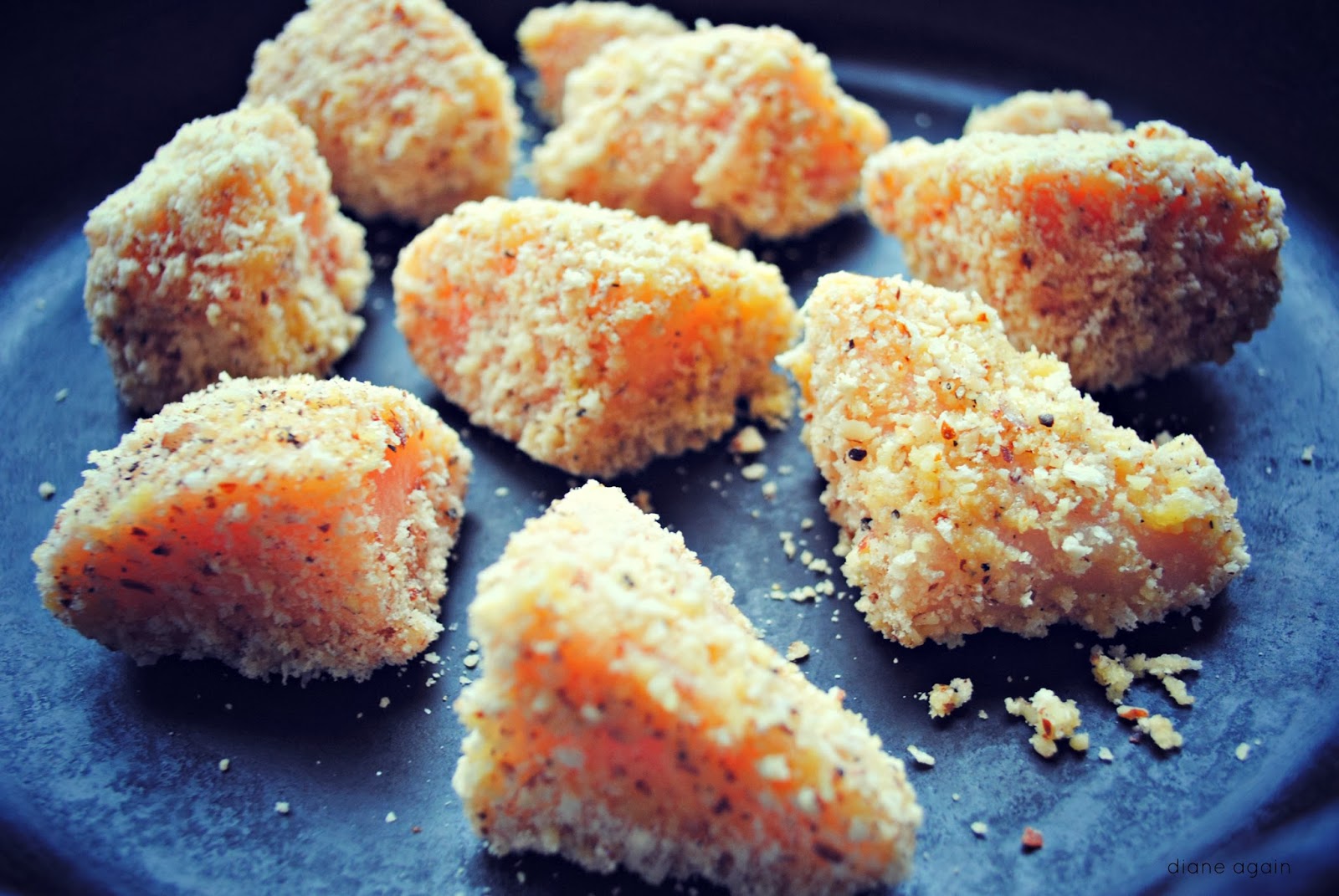 ^ The lovely breaded bits head straight to my cast iron skillet, where I add an extra dollop of olive oil, which keeps the crunchy coating from sticking to the pan. Then I pop the whole business into a 420 degree oven, and let them bake till golden and crunchy, usually 20-25 minutes.

Now, once I got my nuggets settled into the oven, I realized that something was missing from my life.

Something red and furry.

My big red dog, Ranger, who usually lounges within eyesight of me at all times, was nowhere to be seen.

A quick patrol of the house confirmed his absence. but I also discovered that the door to the garage was ajar, neglected in my haste to get the groceries in the house and my cooking project underway. And the big garage door was still open.

Ranger, ever alert to such details, had obviously done what must be done. He boldly seized the opportunity I had inadvertently provided, and slipped out the door for a wild romp around the neighborhood.

Hmm. I have to admit it was pretty darn smart of him.

Opening the front door, I immediately caught sight of a red arrow dashing through the gardens in the neighbor's front yard. Yep, there he was, nose to the ground, tail up and wagging, glowing in the low afternoon light. I hollered to him, repeating the word "treat!" in my most tempting and hopefully nonchalant voice. Then, leaving the door wide open, I went back into the kitchen and waited.

Sure enough, within two or three more minutes, I heard the very businesslike trit-trot of my dog cruising back into the house. He shot through the front hall and burst into the kitchen, alive with the glory of his successful prison break and amped to collect on the promised treats.

I handed over four crunchy snacks and praised him for coming home. Then my timer went off and I became engrossed in a nugget check. It wasn't until I flipped them over and closed the oven that I realized what I'd done. Or not done.

But as I went to the front hall to look outside again, expecting to see Ranger back on the run, I happened to glance into the library. And this is what I saw. 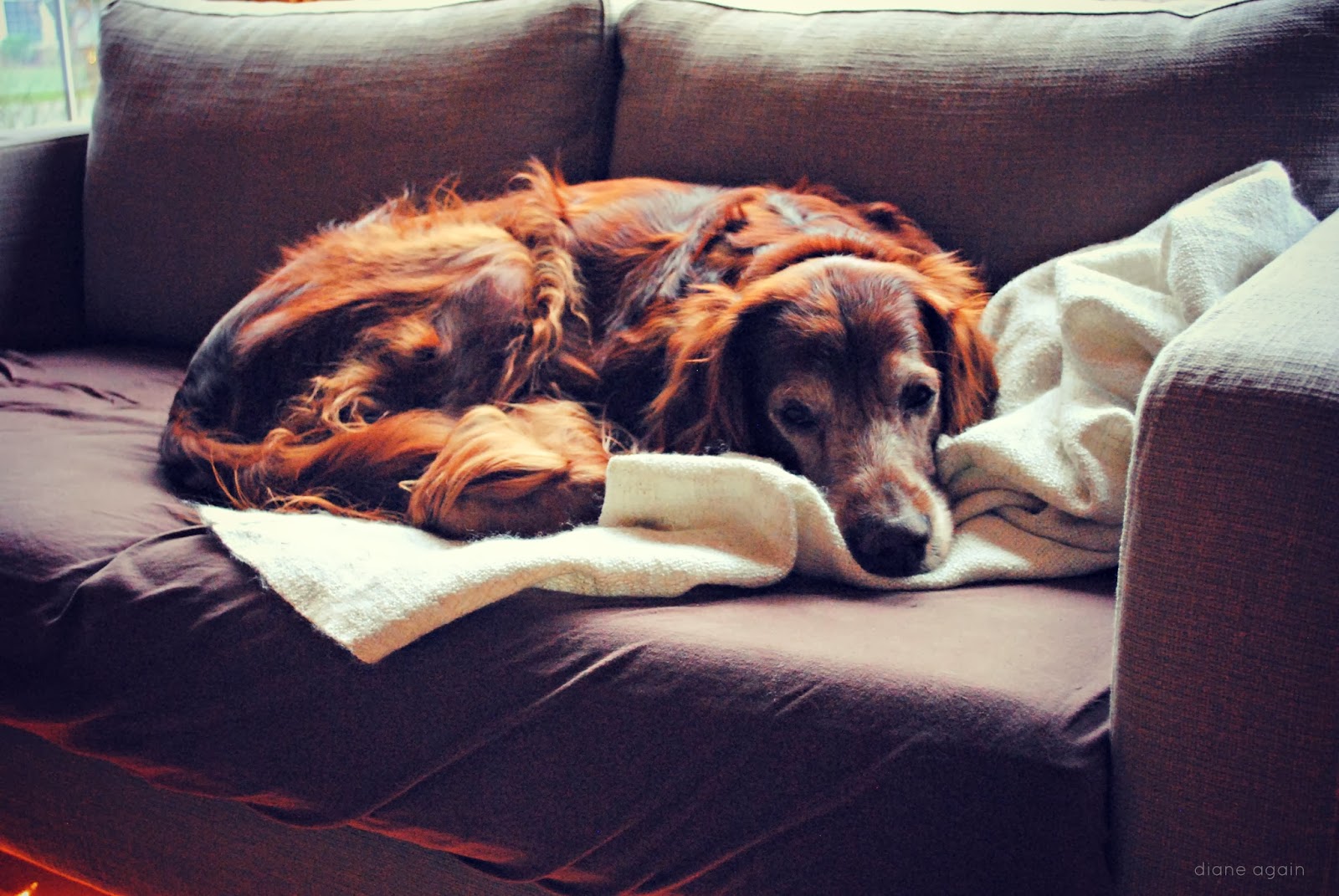 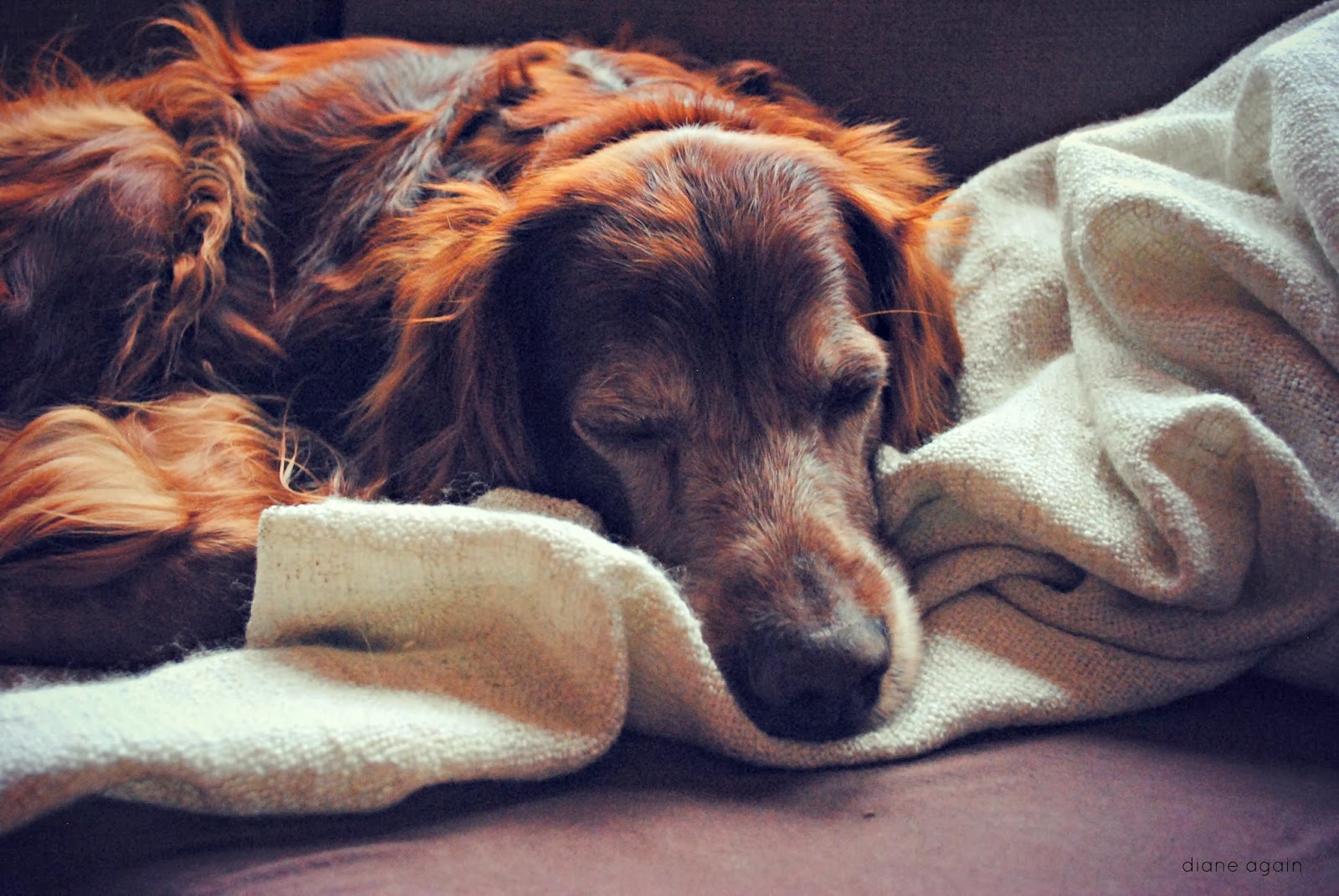 ^ Aww. Angel boy had walked right past that open door and put himself down for a nap on the sofa. I especially love how he uses the throw to accomplish maximum comfort and snuggleability. 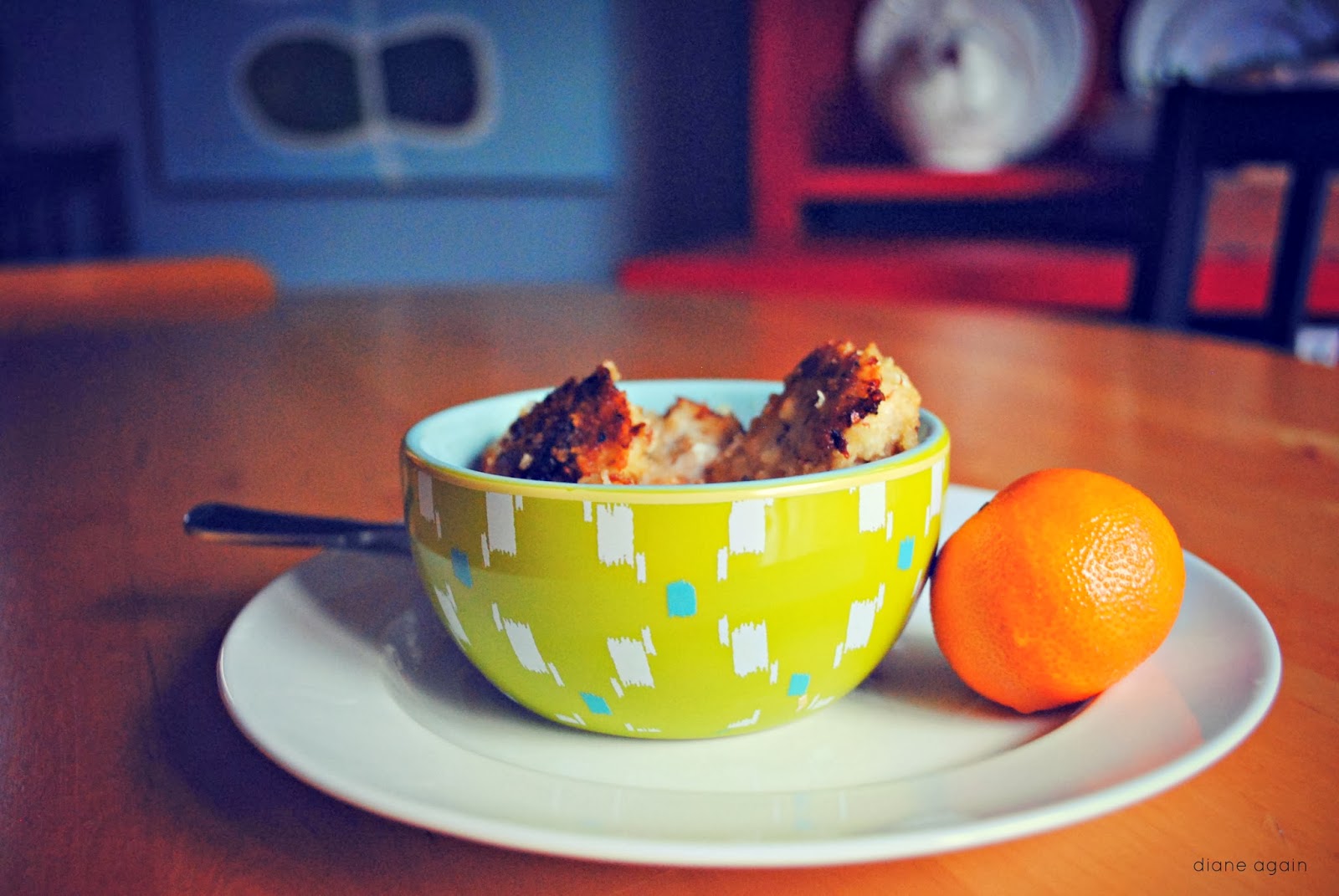 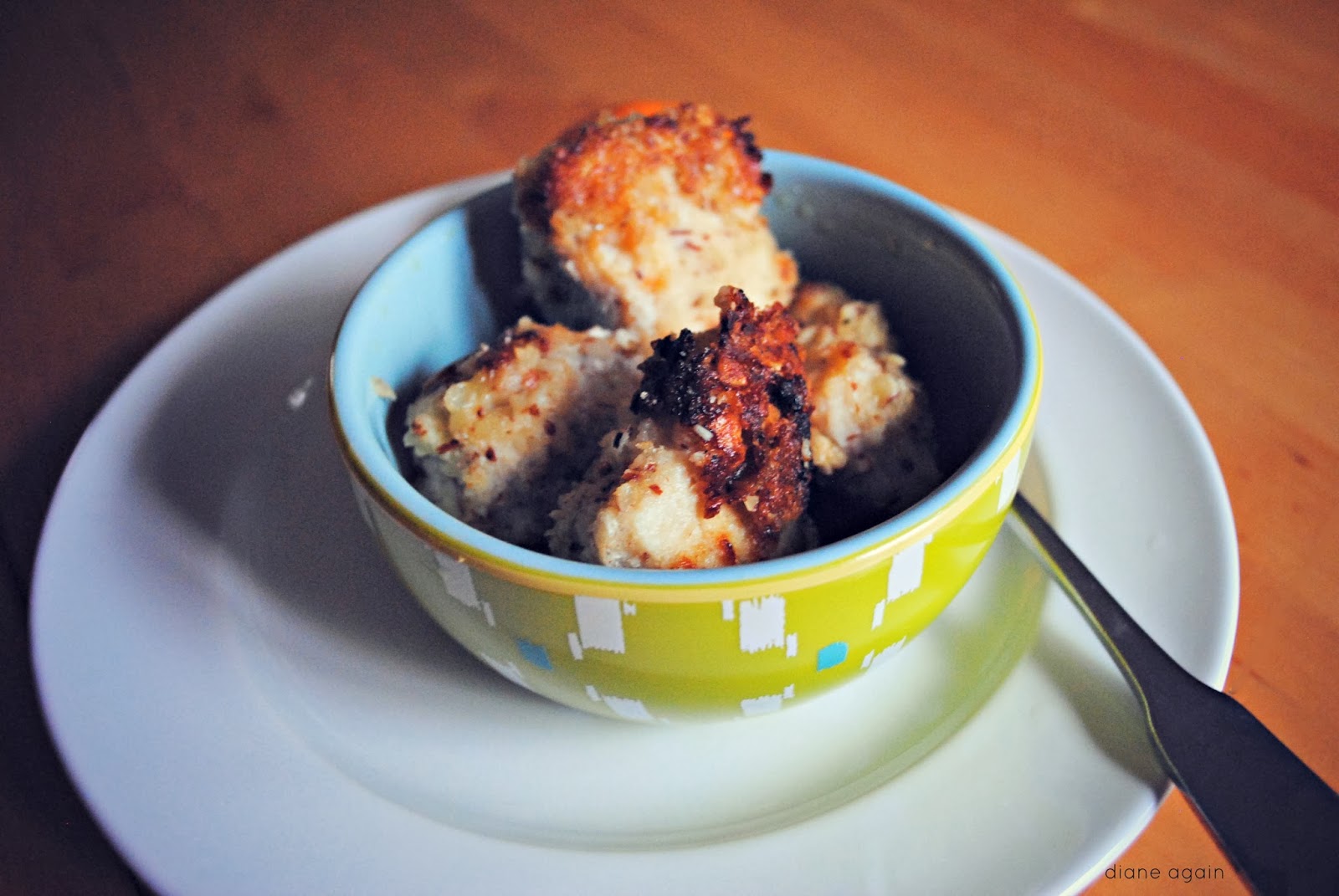 ^ Within minutes, my Parmesan Chicken Nuggets were ready. I pulled them from the oven, snapped a few photos, then sat down on the couch to savor their crispy, ranch-dipped goodness.

And guess who decided to join me. 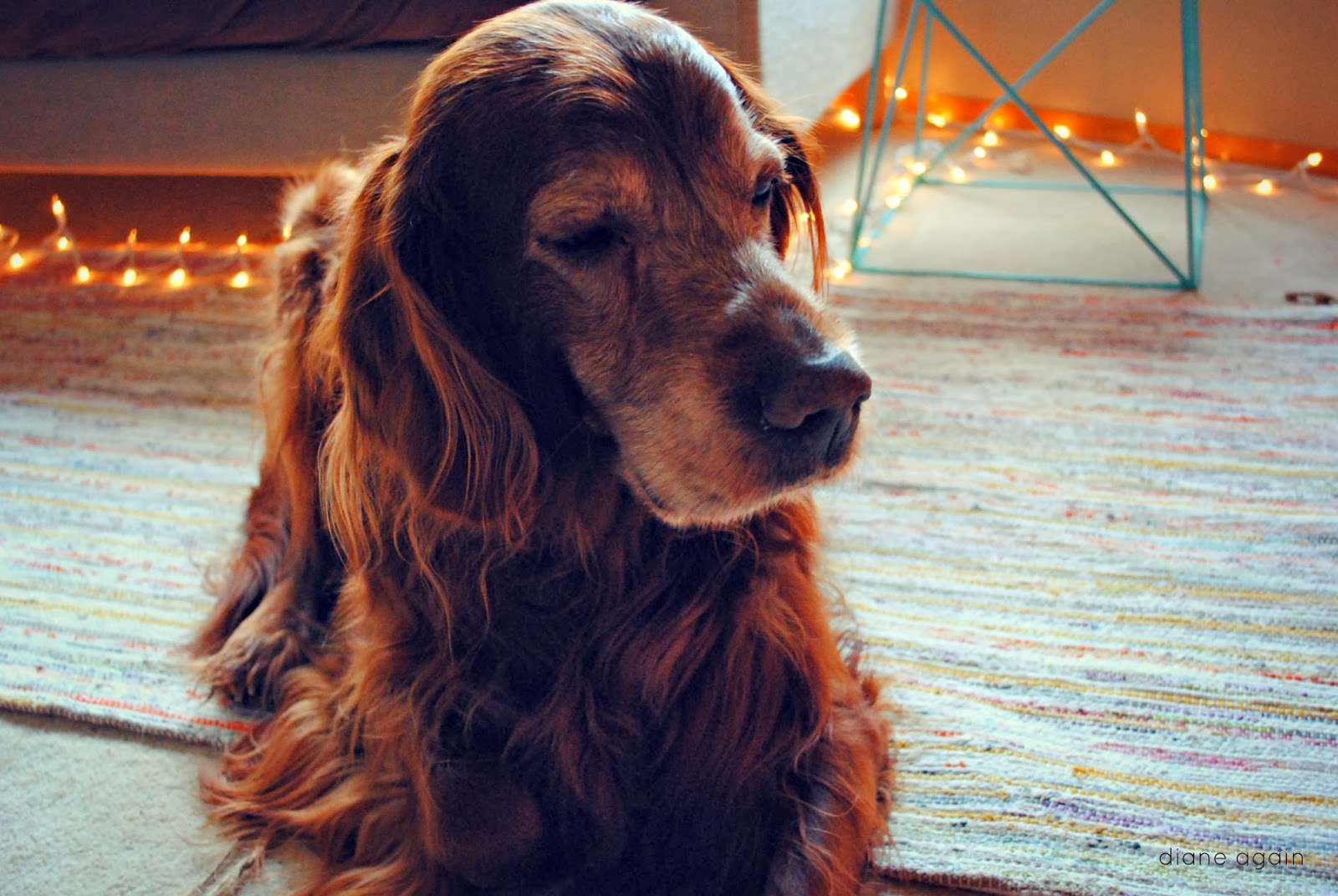