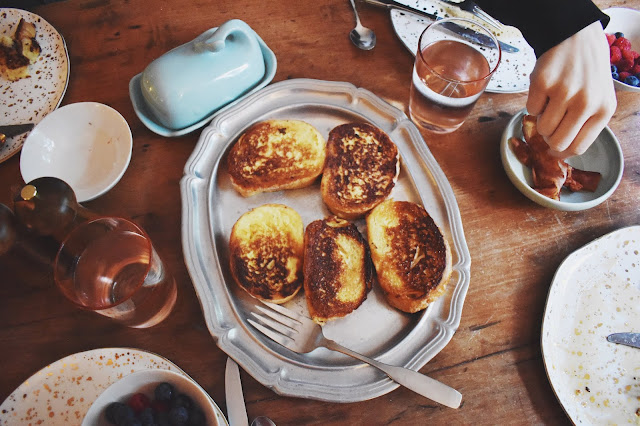 In the titanic clash of American breakfast carbs, I grew up in a pancake home. My three brothers ate pancakes and Log Cabin syrup like they were going out of style; my mother literally could not flap those jacks fast enough to keep up with my siblings' flying forks.

My appetite was bit more subdued. I never really got on board with the pancakes, but for quite a while, my Michigan winter middle school breakfasts featured a parade of Eggo toaster waffles. Of course, I loved them because they were store bought, in an era when most of us somehow thought store bought was bigger, better and brighter than anything home made. But eventually I realized that Eggos tasted like cardboard, and my easy spread margarine didn't even melt properly in the little squares, and that's where I drew the line. 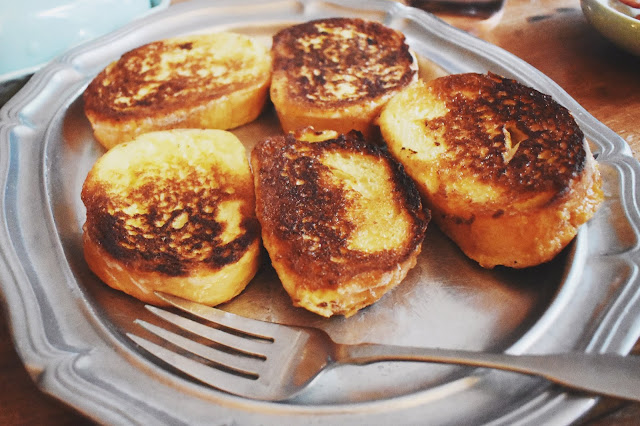 All this while, my husband was down there in Ohio living the French toast life. Made from proper unsliced French bread and smothered in real butter and proper maple syrup.

I had no idea such things existed.

Once we got married, he got me on board the French toast train and I have never looked back. 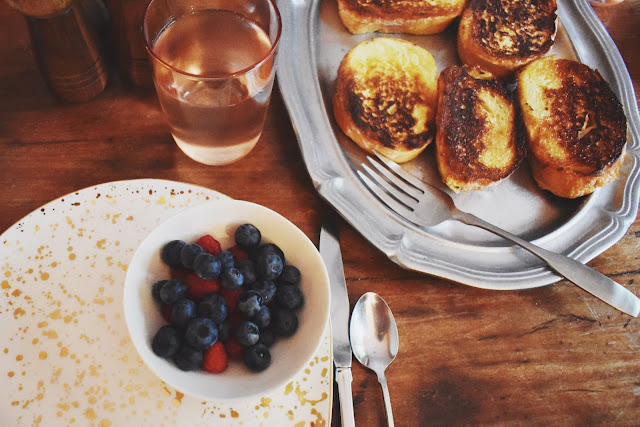 Now I'll be the first to admit that hearty breakfasts are not my thing. As a delayed sleep phase sleeper, my body has no interest in morning feasts, and so my early bird husband quickly realized he was not going to get many French toast breakfasts.

So we struck a compromise that has lasted over the ages. 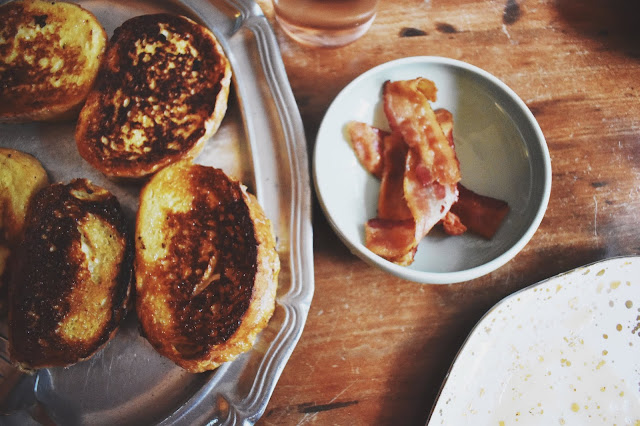 My daughters are all agreed with us. Breakfast for dinner is a concept that works for us, and though we affectionately dabble with pancakes and waffles from time to time, we are hands down a French toast family.

French toast recipes are a dime a dozen and it's not too hard to find one that works.

Far more important is the quality of ingredients. Raising my kids on real butter and true maple syrup is one of the greatest satisfactions of my parenting life - I know that sounds absurd but it's true. As far as the bread goes, there's a mid-price-range store brand loaf of unsliced French bread at my store that has a good crispy crust but that certain cheap squishiness on the inside that takes on holy qualities when sopped with milk and fried up in the griddle.

Also, spices. Everyone has their own ideas about how French toast should be seasoned and there's no point in arguing which is best. Many cooks opt for cinnamon, ginger, or a good hit of sugar. I prefer a generous allotment of freshly grated nutmeg and a pour of real vanilla,and that has become our family standard.

1. Slice the bread to the desired thickness - I like a solid inch. Lay the slices out on a baking rack to dry out a bit before cooking.

2. Whisk together the eggs, milk, nutmeg, and vanilla.

3. Working in batches that will fit into your frying pan or griddle, soak the bread in the egg mixture. Use a baking dish just big enough to hold your batch; pour in just enough egg mixture to saturate one side of the bread, then flip the slices over and add more egg mixture. Take care to pace yourself so that your bread and egg mixture will come out more or less even in the end.

4. As the first batch soaks, heat up a pan or griddle to medium high. Add a tablespoon or two of canola, let it heat, then add the bread. Cook it at a heat high enough to get a good golden glow on the bread but not too hot that it burns. On my stove using a cast iron skillet, medium high works well for the first batch, but then I notch it back to medium for the following batches, and add more canola oil as needed. Serve immediately.

Let me say that again: French toast is best served fresh off the stove. Any time spent waiting around creates cold or even worse, soggy specimens, and that is an insult to the dish. The sad truth is that a devoted French toast chef must forgo her own meal to keep cooking as her clientele eats. But here is a special and high guarded industry secret: I save the last batch of golden crisp bread for myself to eat piping hot off my very own plate. And I savor every delicious bite as my family watches in admiration.

A well-deserved finale to the glorious spectacle that is French toast.