"Give me your tired, your poor,
Your huddled masses yearning to breath free,
The wretched refuse of your teeming shore.
Send these, the homeless, tempest-tost to me,
I lift my lamp beside the golden door."
- from The New Colossus by Emma Lazarus

My grandmother was seventy-five when my grandfather died and in many ways, that is when her life began.

Grandpa was a good man, though certainly a product of his times. He preferred for his wife to spend her days at home, working the garden, baking rye bread, canning peaches, and wearing a red dress - his favorite color - if at all possible. For fifty years, Clara played that role to a T and quietly bided her time. 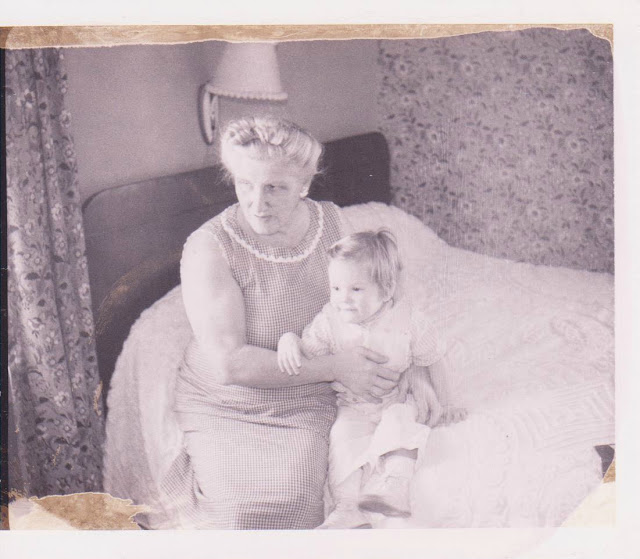 Here is my grandmother, quietly biding her time with me.

It was just a few months after her husband passed that Clara wiped away her tears, grabbed her pocketbook and drove down to the local Grange headquarters where she applied to become an English tutor. In short order, she nailed down the basics of the Laubach method of literacy learning and hung out her shingle as a volunteer.

In her fair city of Three Rivers, Michigan, this offer attracted a steady stream of immigrants.

Quiet, hard-working, hopeful people came and went from her tidy white home, growing not only from Clara's weekly lessons but also from her casual conversation and genuine friendship.

My grandmother, for all her sweetness and cultural sensitivity (in the days before we talked about such things), had a firm mind about learning English as a second language. A daughter of English-embracing German immigrants herself,  Clara preached that in order to take full advantage of all that the United States can offer, newcomers must leave their old languages behind, and speak exclusively English. "After all," she would insist, "they are Americans now and they should act like it."

Clara also insisted that her brood of newcomers should become United States citizens, and she tutored them fiercely to help them pass their citizenship tests. In addition to speaking, reading and writing in English, the test covered a wealth of civics topics: American history, the Declaration of Independence and Constitution, geography, landmarks, holidays and the flag. Drilling her students on the practice list of one hundred possible questions, Clara never gave up or gave in until each and every one of her students became a naturalized citizen. That was a fact of which she was most proud.

Though her own finances were lean, Clara never took a penny from her students. Gracefully, she came to accept their gifts which usually reflected their home culture and her own home took on an international flavor. This bed covering was from Cambodia, that paper lantern was handmade in the Vietnamese style. One of Clara's most dedicated students, Mr. Tang, owned the Chinese restaurant in town and often came to her doorstep with a bag full of fresh egg rolls. They were delicious.

It's no stretch to say that my grandmother's new calling transformed her life. She still ran a neat and tidy farm home but now the kitchen chores and garden duty took a back seat to her students. I always remember my grandmother as happy and content but now I saw her as truly fulfilled.

For two decades - yes, she tutored well into her nineties - my grandmother continued on her mission. And while teenage-me took her work in stride as just the sort of thing ordinary grandmothers do, I soon came to see things differently. Clara's calling was nothing less than holding high the lamp of American citizenship, and ushering her students into our culture through the golden door of her teaching.

My grandmother, Clara Minnie Marie Belz Lewis, was a real-life Statue of Liberty, and for her foresight, determination, generosity and profound patriotism, I am grateful and proud.


As I prepare to vote in this hotly contested presidential election, I find myself reflecting on the moments and milestones of my life that have shaped me as an American citizen and contributed to my worldview today.