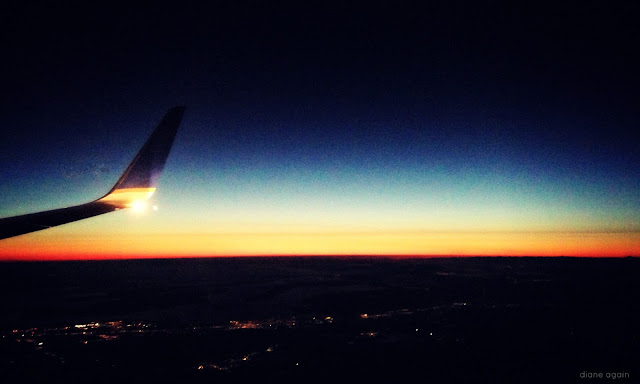 On my flight back home from Chicago to Seattle, I saw some interesting things.

Somewhere over Minnesota, I looked down upon a thunderstorm. The lightning flashes continually illuminated the lavender clouds and every so often, a clearly defined bolt of electricity would snap down towards the earth. It was fascinating and terrible, and the ten-ish year old boy wearing a Pittsburgh Steelers cap, sitting a row behind me, shared my can't-look-away mood.

Seated next to me was a twenty-something guitarist who was on his way to Seattle to start the West Coast leg of his band's tour. His band mates were also on the flight, seated elsewhere, but they were all clearly distinguishable by their all-black outfits, heavy piercings, and tatttoo-covered bodies. Despite the severe exteriors, I had a feeling that he was a softie on the inside. This theory was definitely concerned when I noticed him carefully arranging his snacks on his tray table, Oreos here and goldfish crackers there, and pacing his small bites in order to make the treats last. Made me want to hug him.

But most captivating of all was the sky. When we flew away from Chicago at about 7:40 p.m., the first colors of the sunset - pale golds and rosy pinks - were beginning to creep into the sky. As we climbed into the sky and turned left toward Seattle, we headed into the western horizon and began to travel along with the setting sun. This created the effect of a four hour-long sunset. Every moment of the trip, I enjoyed the deepening evening sky, and by the time we arrived in Seattle at just after 10 p.m., the deep blue heavens and vivid orange stripe across the dark Pacific was breathtaking.

It was a very special thing to experience a perpetual sunset, and I won't soon forget it.

Winter Sunsets
Taking Back The Sun
Camping: It's All About The Sunsets
Tucson Sunsets
Sunset Chaser
Sunsets And Saguaros
Sunset Chaser, Tucson Edition
Langkawi: Somewhere Over The Rainbow
This Is My Reminder For Today
A Sweet Story
San Juan Islands: I'll Be Back
Number 45: Texas
Cheers To Tucson
Home Through The Trees
The Undisputed Truth
Sunset Chaser, Seattle Edition
The Sunset Speaks
Looking Up: Thanksgiving Edition
Sunset Chaser: Sometimes You Win
Sunset Chaser: Sunrise Edition
Posted by Diane Streicher @ Diane Again at 1:37 AM