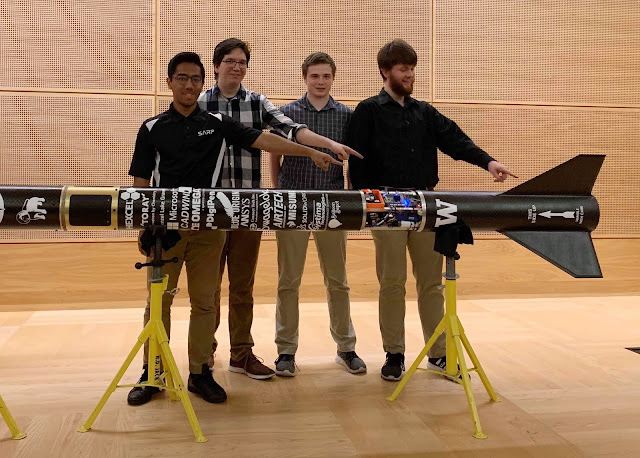 Moondawg and four of her makers.

Tonight I met a rocket named Moondawg. A team of 150 students from University of Washington have built her over the last eight months, and put the last few nuts and bolts together just in time to carry her across the street and present her to a breathless and highly appreciative audience.

Next month, Moondawg will road trip down to Las Cruces, New Mexico, and blast off into the heavens via nitrous oxide and paraffin wax. With any luck, she will reach 30,000 feet with 1200 pounds of thrust, and then drift harmlessly back to earth. There will be other rockets there - well over a hundred of them - all competing in this exercise known as the Spaceport America Cup.

But wait, I hear you saying. This is all well and good, these student rocket scientists and their lofty goals. But what does any of it have to do with you? 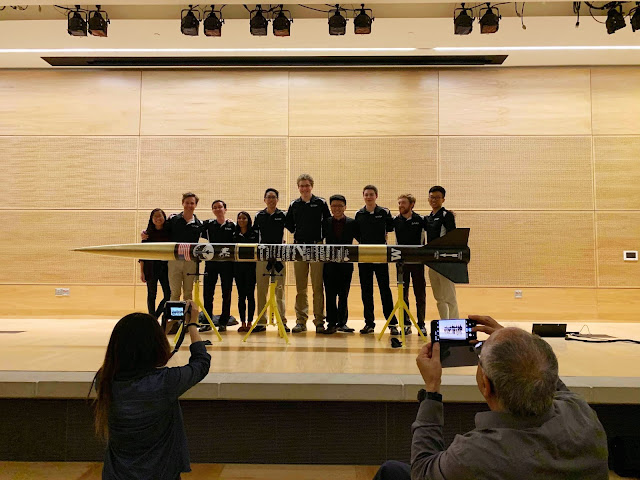 Before Moondawg was unveiled, we met these ten leaders who told us a bit about their area of the project - structures, avionics, recovery, payload, propulsion, and so on - and the special challenges they faced. Then the cloth covering the rocket was dramatically pulled away, cameras burst forth from everyone's pocket, and a massive photo blitzkrieg began.

That's a very good question with a long answer. So let me explain.

As the months passed, I came to know many people in his family and friendship circles.

He invited me to come to Malaysia and see his tropical homeland with my own two eyes. Eventually, I did. I met more of his friends and more of his family. Friendships deepened. The circles continued to expand. 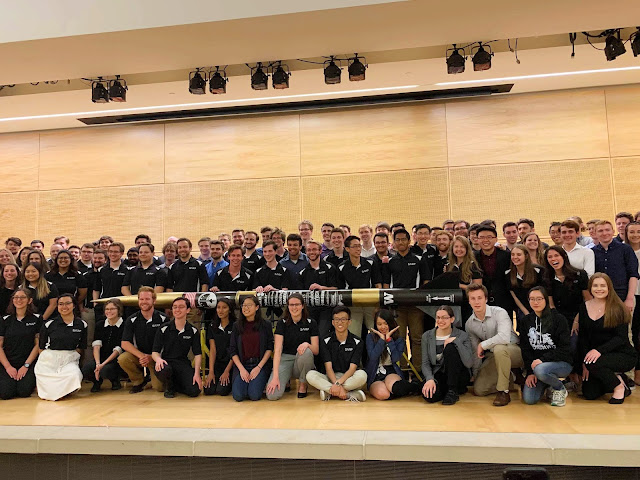 Here's the entire team of 150 students - the Society for Advanced Rocket Propulsion or SARP - who launched this amazing project. You wanna find my friend, Aqil? Find the sideways W (for Washington) near the right end of the rocket. Aqil is standing in the first row behind the rocket, just to the right of the W, exactly where his work on the rocket is located. Proud papa.

In the spring of 2015, my friend gave me some interesting news. His cousin had just accepted an offer to attend University of Washington. In Seattle. A quick half-hour drive from my house. Would I like to reach out to him and perhaps meet with him once he arrived in the States?

And so yet another new friendship was born. 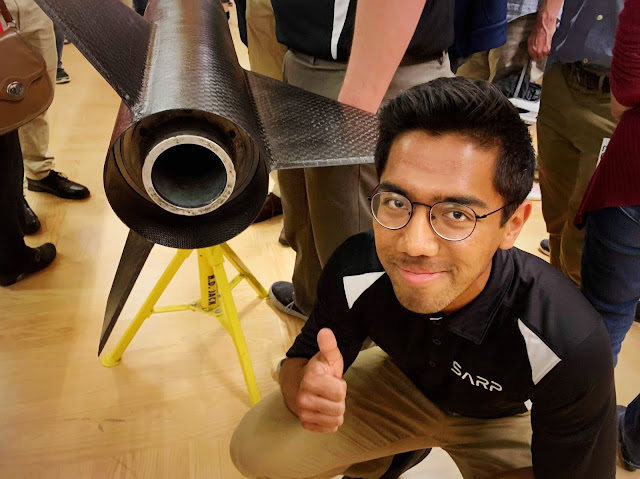 Aqil worked on the propulsion team, machining the chamber where the fuel will eventually be loaded. He's particularly proud of his work on the nozzle where blazing jets of fire will burn off as the rocket lifts off into space. Well, not actually space. But at least the troposphere.

Aqil and I became fast friends. A high-achieving aeronautical engineering major with a keen curiosity and a compassionate heart, it's been a joy to get to know him and welcome him into our family life. He's hung out with all the Streicher clan and dined at our table more times than I can remember. He brings his friends and roommates over. He also helps me cook.

And I've come to know his family - his brother has been to visit here in Seattle and come round to the house, and I was lucky enough to meet the rest of family when I visited them in Havana, Cuba, a few years back. I may or may not have carried a suitcase full of fried chicken back to Aqil at school straight from his mother's Cuban kitchen. 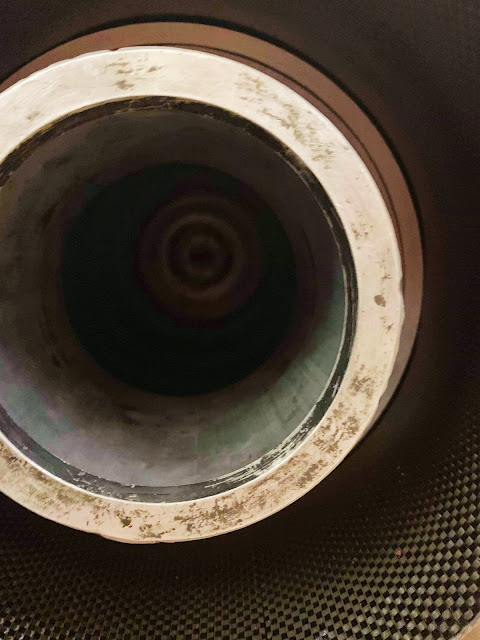 There are two components to the rocket fuel: a cylinder of paraffin wax filled with an inner core of nitrous oxide, As Moondawg is going through final preparations for launch, the fuel team will load that cylinder into this chamber, and Aqil will fit a seal and then the nozzle underneath, and make sure everything is locked and loaded for takeoff. Then, somebody will strike a match.

Just kidding. Pretty sure that's not how they do it.

Now I hate to be a downer, but I'll admit I've been feeling sad lately as Aqil's senior year quickly winds down. In just another month, he will graduate, and soon be blasting off to graduate school. Certainly, Aqil is meant for great things and will eventually be traveling all over the world if not orbiting the planet or streaking across the solar system on the great adventure of his life.

As much as I wish him well, I can't help feeling a bit sad to think that his time at UW is quickly coming to a close, and our fascinatingly different paths are about to diverge. 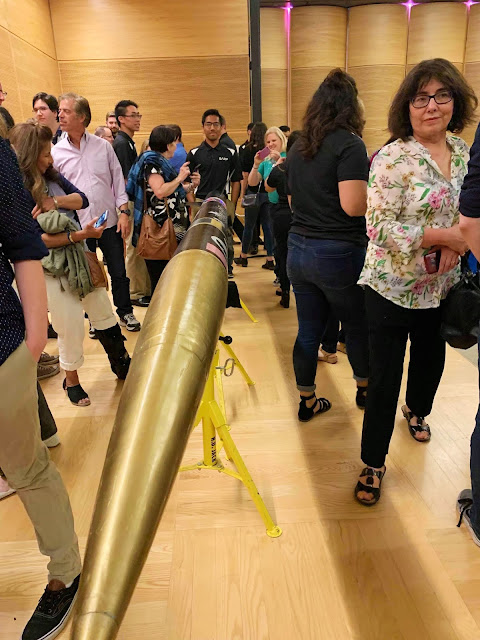 I suppose it was no surprise that everyone and their mom was crowding around the freshly unveiled rocket and trying to get photos of their student posing proudly in front. But was it really too much to ask for everyone to take five steps back while I captured the full length of Moondawg with Aqil at the far end all by himself?

But here's the good news. Aqil has accepted an offer to attend grad school at...University of Washington! He's staying here in Seattle for at least a few more years, and I am over the moon. 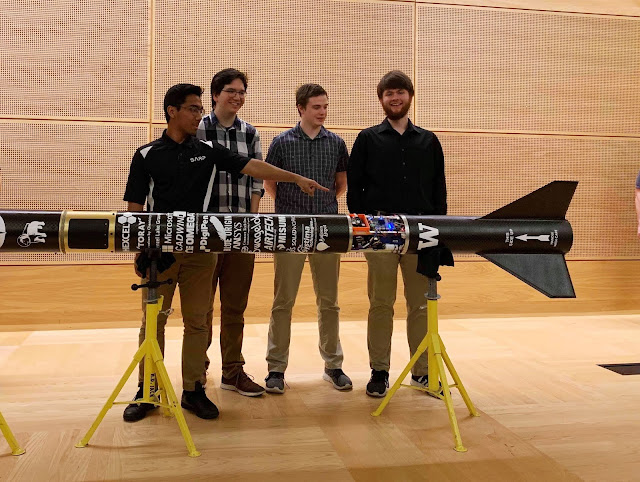 As the crowds slowly dwindled away from the rocket and off toward the refreshments, Aqil and his buddies got a chance to pose by their beloved work on the back end of the rocket. As they stood a bit stiffly, my husband called up to Aqil, "Point to the part you made!" Aqil's arm quickly shot up, and the photo was made. 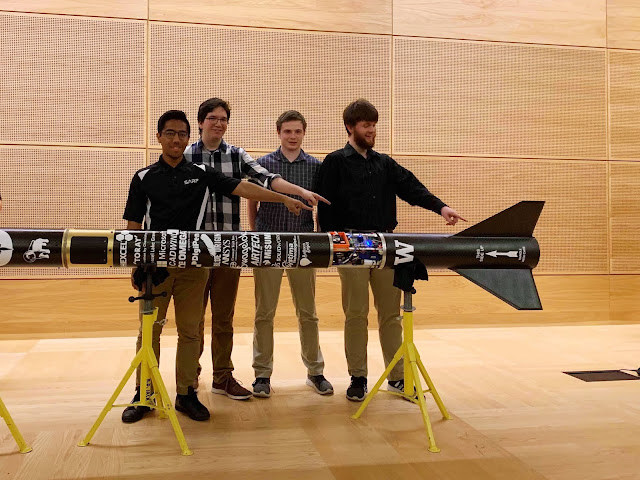 Even better, in the next instant, two of his buddies also obediently followed that instruction, leaving everyone in the room no doubt about where their rocket-building loyalties lie.

So here's to you, Moondawg; may you fly high and true in Las Cruces and make all your SARP stars proud.

And here's to you too, Aqil. I admire your passion and your drive and your quiet determination to make all your high-flying dreams come true. I am proud of you and I can't wait to see what you do next.

More stories about my friend, Aqil:

An Invitation To Dinner
Aqil's Chicken
Chicken Drumsticks
Ready To Launch
An All-American Dinner
Moondawg For The Win
Posted by Diane Streicher @ Diane Again at 3:19 AM

Email ThisBlogThis!Share to TwitterShare to FacebookShare to Pinterest
Labels: Art and Architecture, Inspired Learning, Interesting People, Travels Near and Far