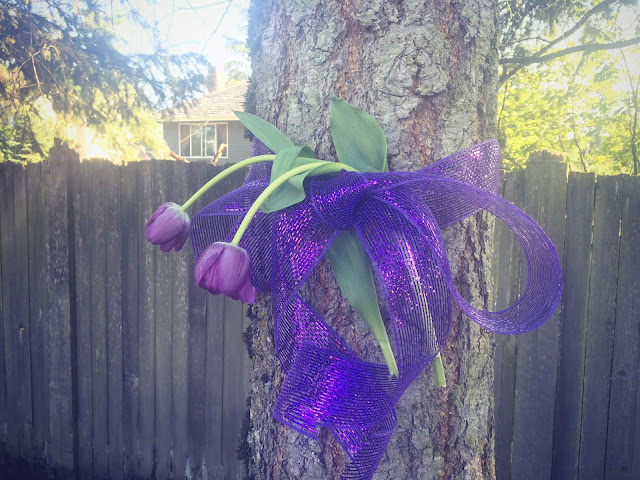 Trees along Chennault Beach Road decorated with tributes for the fallen,
created by my sweet teenage across-the-street neighbor.

We were wrapping up a scary movie Netflix binge when my second-born breathlessly rushed into the room.

"Something MAJOR is going down out there," she gasped, nodding her head toward the front yard.

Twenty steps beyond my home lies Chennault Beach Road, a silver thread of asphalt that comprises the main thoroughfare and sole route into and out of our neighborhood. Leading down the bluff to a small cluster of well-kept homes, even on a Friday evening after midnight, it's usually a quiet street.

But as we turned our attention away from the murderous zombies on the TV screen and followed my daughter's gaze, we immediately understood the horror in her eyes.

Police cars.
Fire trucks.
Emergency vehicles of all shapes and sizes were streaming into our little community, sirens blaring and lights ablaze.

At least twenty first-responders screamed past our front door; as five, then ten, then twenty minutes ticked by, we noticed that not one of them was coming out.

Regular traffic - strangely heavy for this time of night - began to rush through a nearby side street, clearly seeking an alternative route out of the Chennault Beach loop. Apparently, the main road was closed.

Trapped drivers pulled their cars to the curb along my yard and gathered on the street corner. From the open windows, we strained our ears in the hopes of making out their conversations, in the hopes of understanding what was going on.

My mind struggled to bring order to this jumble of riddles. I could imagine only one scenario that would explain the facts.

Shaking off the chill of that ominous thought, I blamed my dire conclusion on the scary movies, and after another half hour of nothing happening outside, we all gave up and went to bed.

"Three people were killed at a house party down the street. One more was injured. They caught the shooter."

My husband greeted me the next morning with the answers to my questions, but the ones I least wanted to hear.

Flipping open my Facebook feed, this news was affirmed in spades. Friends across the world were tagging me to a crush of articles describing the horrors that had unfolded at this gathering of local college kids in my neighborhood, though there were few details to be found at that point.

As more facts came in, the scenario went from bad to worse.

The shooter was someone we knew. He worked for my second-born at Abercrombie & Fitch during most of 2015, and had earned her respect as a hard-worker and conscientious young man. She gave him a funny nickname and they shared pictures of cats on Instagram.

One of the victims was the best friend of a young family friend. Her name, we learned, was Anna and by all accounts, she was lovely. She had been dating the shooter and apparently broke up with him last week.

The rest of the morning was a blur of emotion and communication.
I burned through my phone battery in record time.

By noon, my soul craved some peace and fresh air.
So I turned, as I often do, to my garden to bring order and calm to my troubled mind.

How to make sense of these tragedies? Lord knows we've all had plenty of practice lately, working through the anguish of senseless shootings and terrorist attacks.

Yet how infinitely more painful the process becomes when the people involved are real, living human beings that walk the same paths, share the same streets, breathe the same air as me.

Three young lives cut short for no good reason.
Three devastated families who will mourn this horrible day forever.
Three bullets shot from a killing machine that deserves no place in civilized society.

I have no words to wrap around the injustice, the shock, the outrageous crime of their deaths.

And I pray for these three victims, for the peace of their eternal souls, for their families, for all of us who bear the scars of this brutal tragedy and all the other tragedies like it.

But then, what about the shooter?
Is he to be hated, despised, cast off as pure evil?
Is he as demonic and inhuman and other-worldly as the monsters I watched in my movie?

No. I can't accept that. Until Friday night, he was known to be a smart, friendly, loyal and hard-working young man with a successful life and a bright future.

How did he fall so far?
I can't explain. But I know this.

The shooter committed an act of evil.
But he is not evil.
He is a human being.
And human beings have been killing one another since the dawn of time.

Each human being on this planet is capable of great violence.

Our souls hang by silver threads, beautiful and pure, yet undeniably vulnerable and infinitely fragile.

And while I pray that your humanity and mine will never be tested by a temptation to murder, I also pray that we find compassion and forgiveness in our hearts for those whose silver threads give way.


* * * * *
To read more about this tragedy and the healing in its aftermath, try:
Dear Mrs. Ivanov
Flowers, Candles, Ribbon
Posted by Diane Streicher @ Diane Again at 2:48 AM