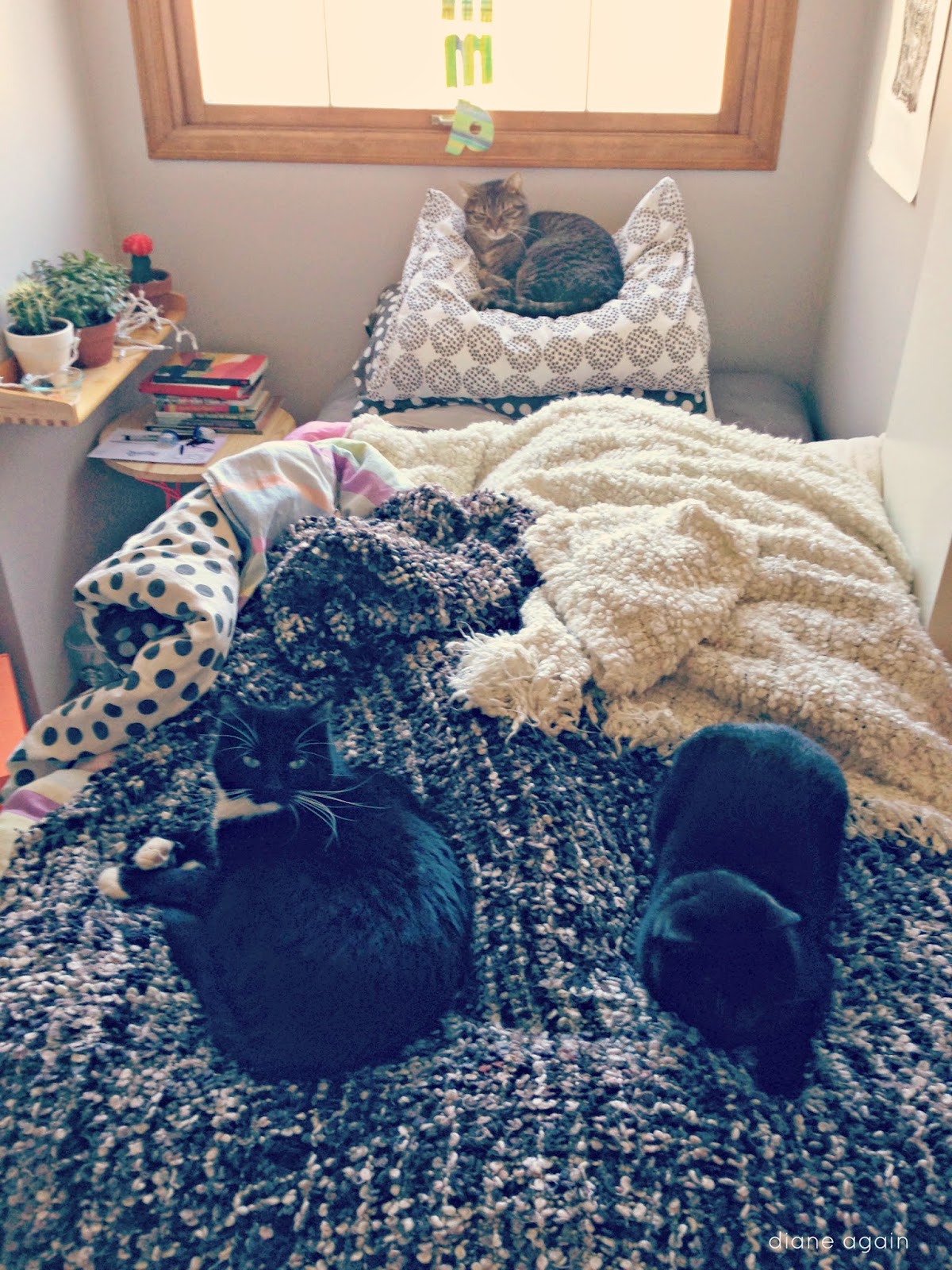 Meet my three cats. If nothing else, you should know that they were part of an abandoned litter, fostered through their motherless infancy by a dear friend and her many bottles of goat milk, and we consider them to be sent directly from heaven, just for us.

Also, please note that these relaxed gents take their red-headed doggy brother very much in stride. Around here, the old notion of cats and dogs as natural enemies holds no water, and we often find one of these furry fellows curled up next to ol' Ranger, both of them snoring peacefully away.

And thirdly, it may be observed that all three cats bear names taken from characters in Harry Potter. Indeed, we are huge fans of this literary epic, and when the kittens were nameless, quickly agreed to draw their names from this source. We spent hours sorting among the characters, debating which names sported the right amount of charm and best suited each cat's emerging personality. Now that a few years have gone by, it's fun to take stock of our choices and evaluate their fit at this stage of the game. 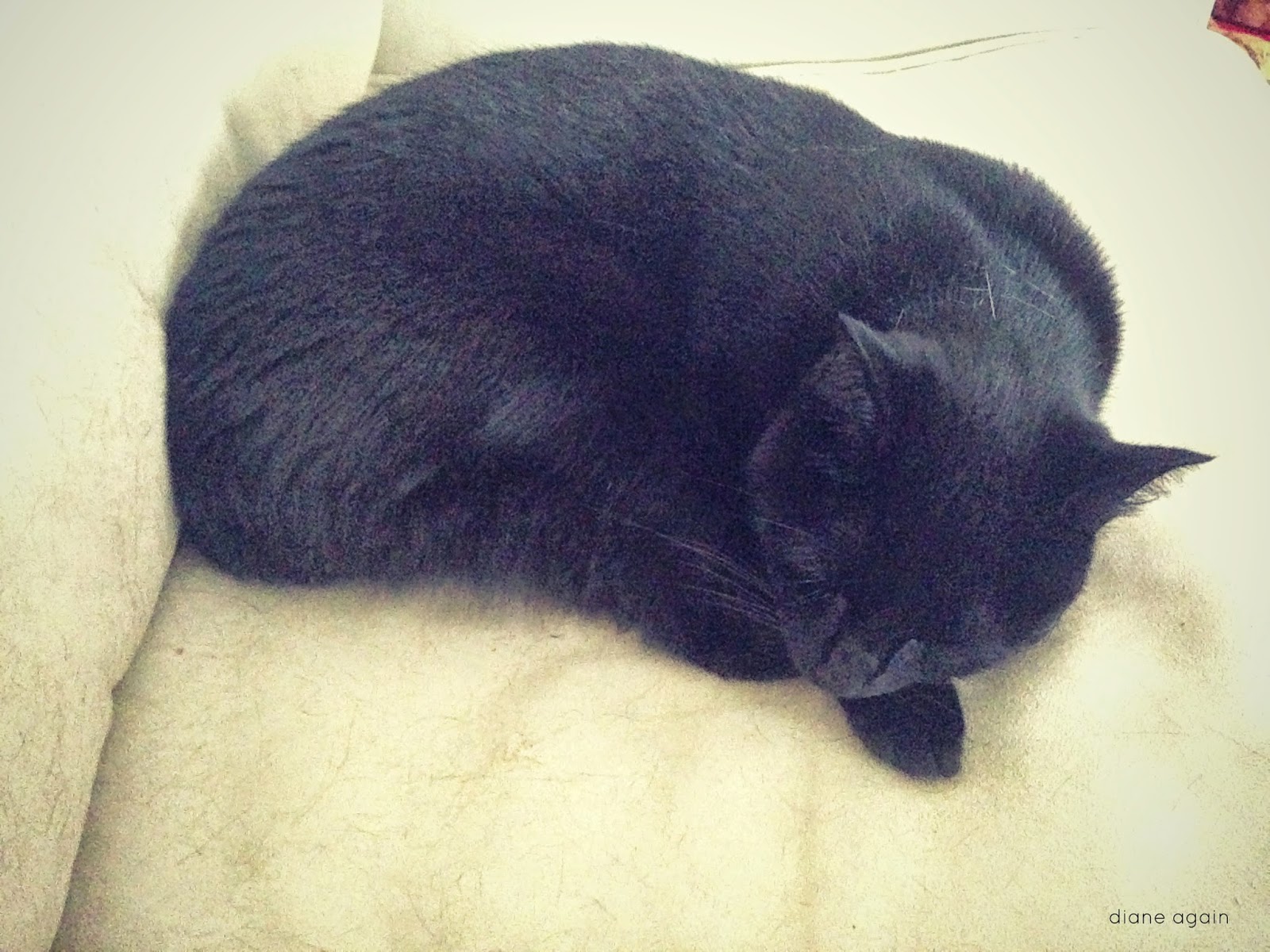 ^ Black cats are notoriously difficult to photograph, but this white throw on the couch was a perfect backdrop for my sweet little lump of coal. 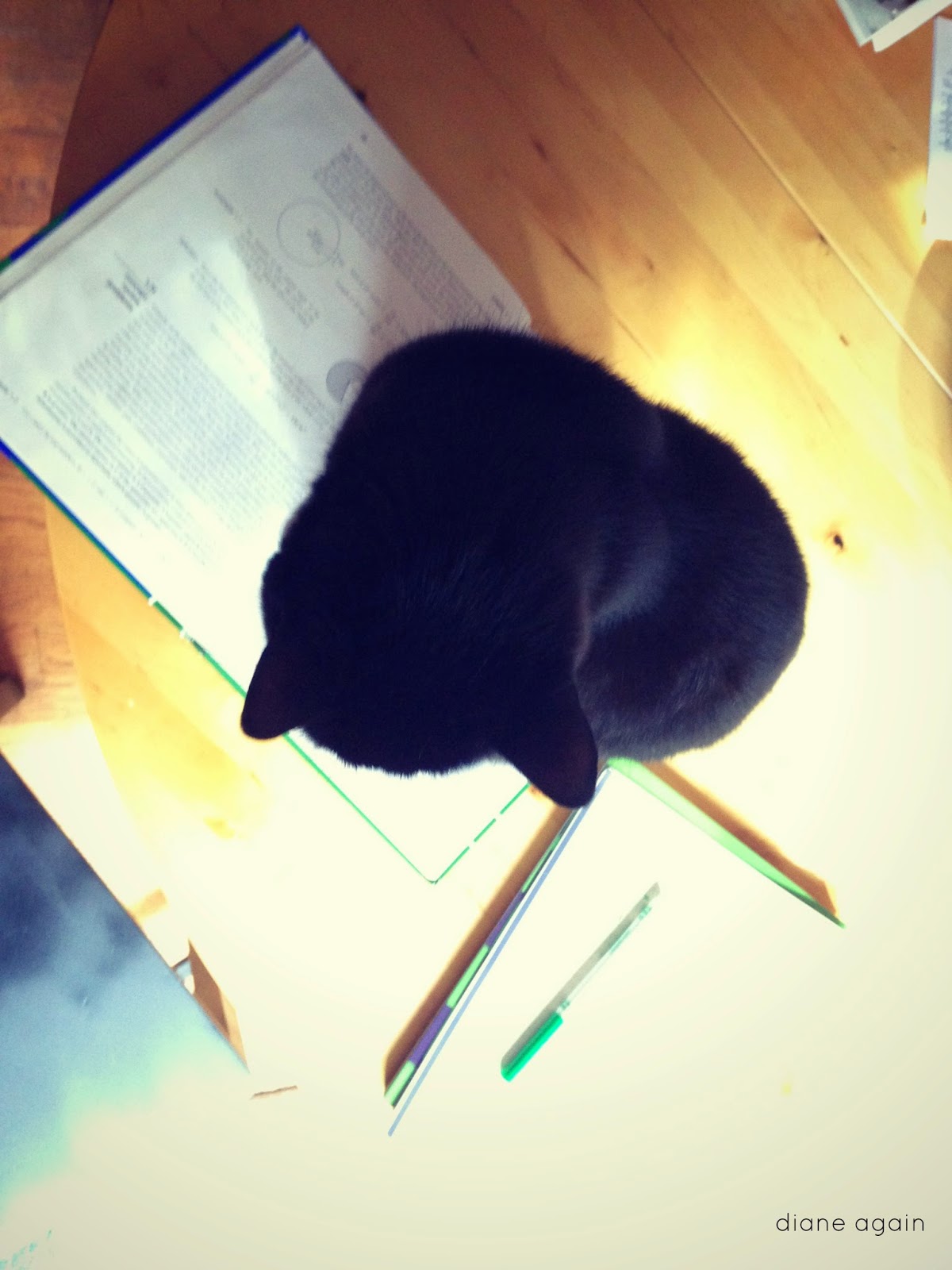 ^ Luna has a strange and persistent obsession with my algebra texts. Whenever I open one up and begin to read, his sixth sense sends him in my direction, and he curls up atop the smooth, cool pages. 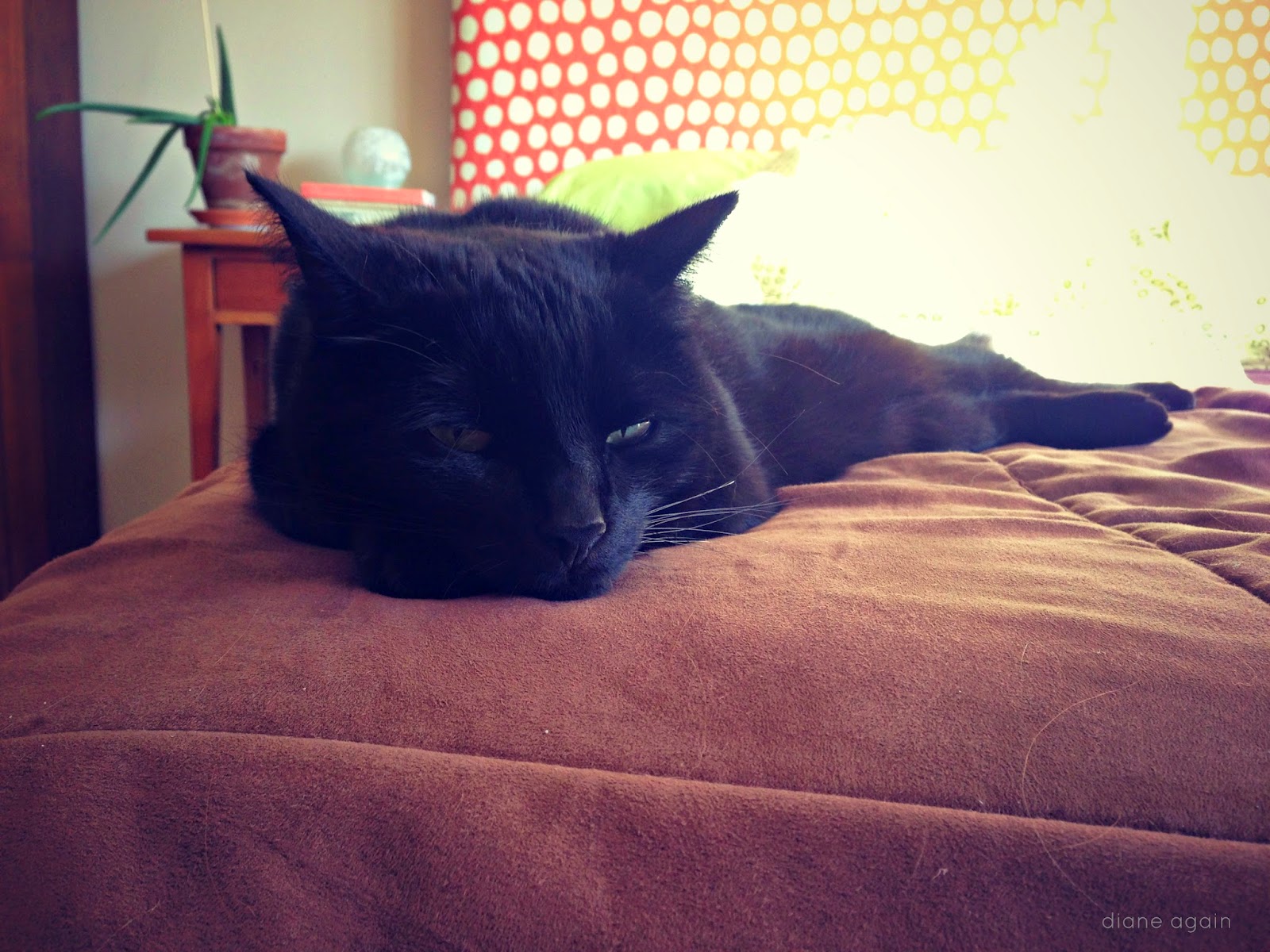 ^ A cool cat stretched out on my bed in the warm sun.

^ Luna has had a strange journey. Originally, he was a she, so the moon-referencing name seemed just right for a black female cat. When we learned that this kitty was in fact a boy, we considered adjusting to Luno or Lunar -- something just a tad more masculine. But the die had already been cast and the name Luna stuck.

Interestingly, despite the gender mix-up, his Harry Potter namesake has proven to be a great fit. Luna Lovegood is a quirkily confident free spirit who marches to the beat of her own drum and makes no apologies for who she is. Ditto our sleek and clever cat, who has a bevy of odd nicknames including Woony Toons, Woonus. Wohnny Tohns and straight-up Woon. He's a smooth operator who bestows calm, loving kindness and a sassy sense of humor wherever he goes. 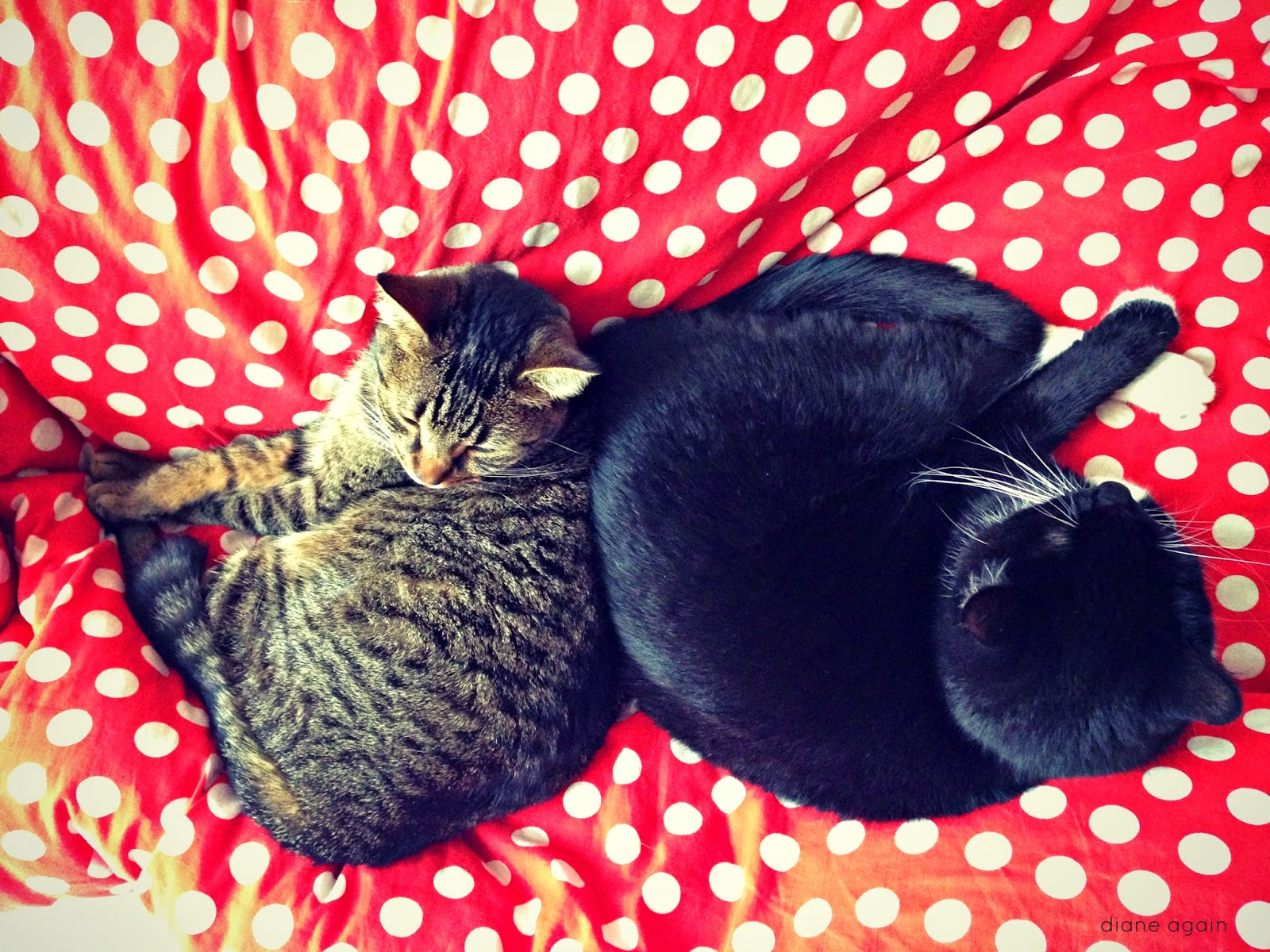 ^ The votes are in and Sirius has definitely won the Most Likely to Cuddle With a Brother award. 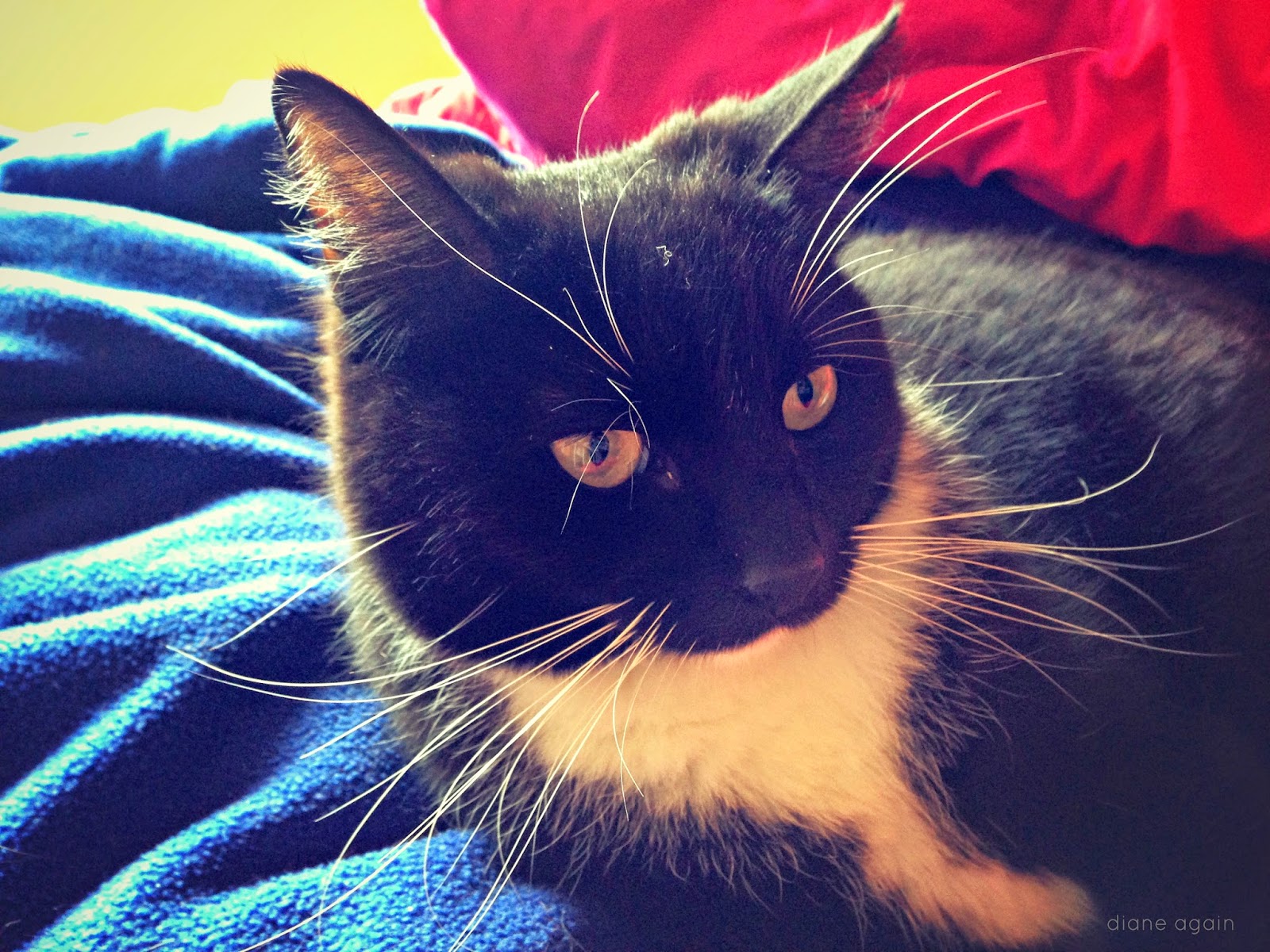 ^ Those long white whiskers, deep golden eyes, and the crisp white "shirt" peeping out from his black tuxedo jacket lend an air of academic prowess to the Little Professor. 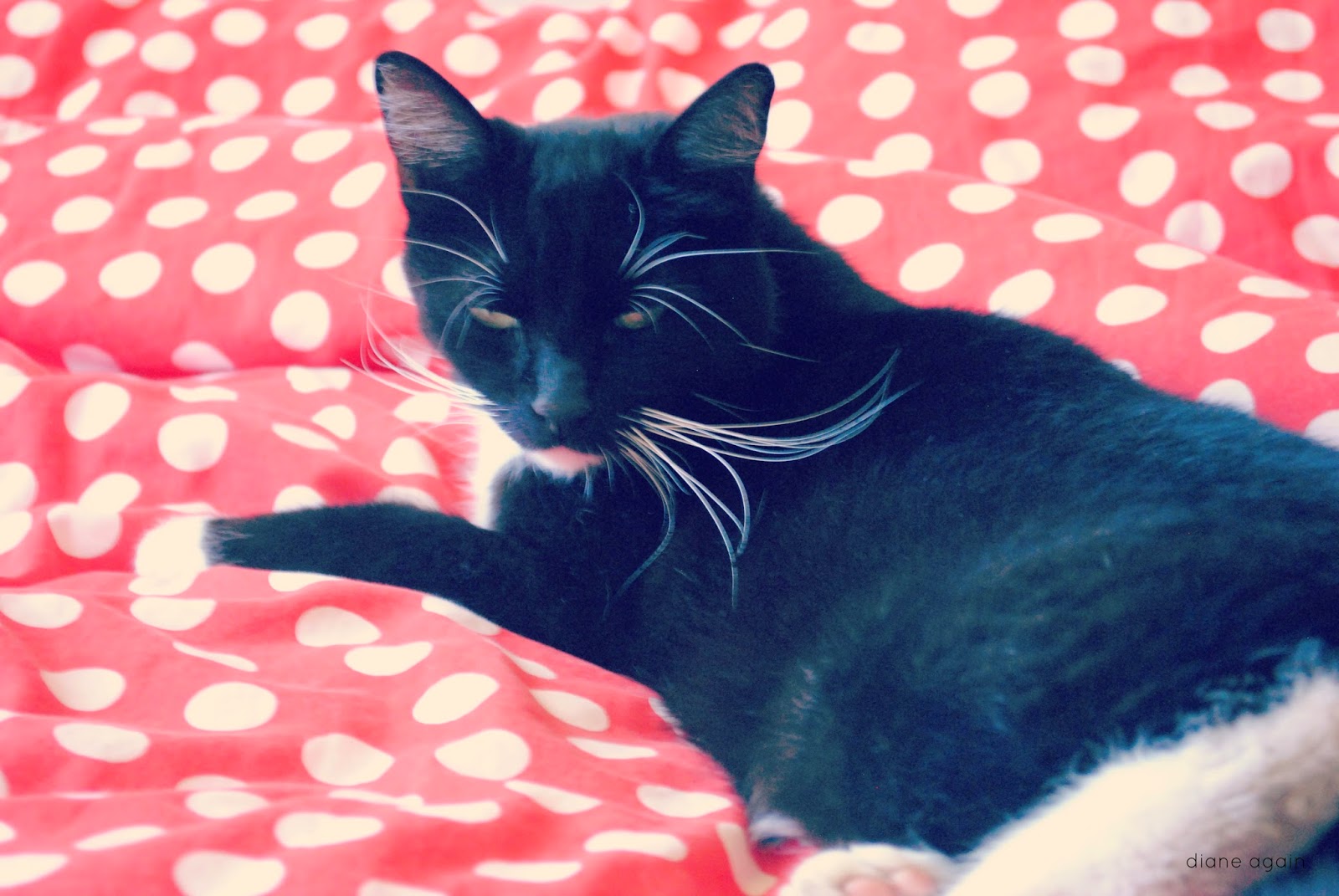 ^ While Luna hunts and kills his prey, Sirius dances with butterflies. See what I'm saying?

Named for Sirius Black, an elusive, mysterious, misunderstood and ultimately loving wizard, this kitty has big shoes to fill. And I might argue that his namesake does not line up with this little boy's tender personality. Our dear Sirius is the dear fellow with the crooked glasses who is always trying to keep up with the big boys despite the extra scrapes he seems to always get on his shins, whose mother makes him take an extra sweater just in case he gets cold. Such a tender heart this kitty has, though he's a bit short on pure athleticism and bravado. In fact, we often muse that he is more of a Piggy from Lord of the Flies than he is a true Sirius Black.

But Sirius is pronounced Serious, and that word describes him perfectly. Nicknamed The Little Professor and Owl Eyes, this little boy is indeed a sincere and solemn little lad, and in that respect, the name Sirius suits him to perfection. 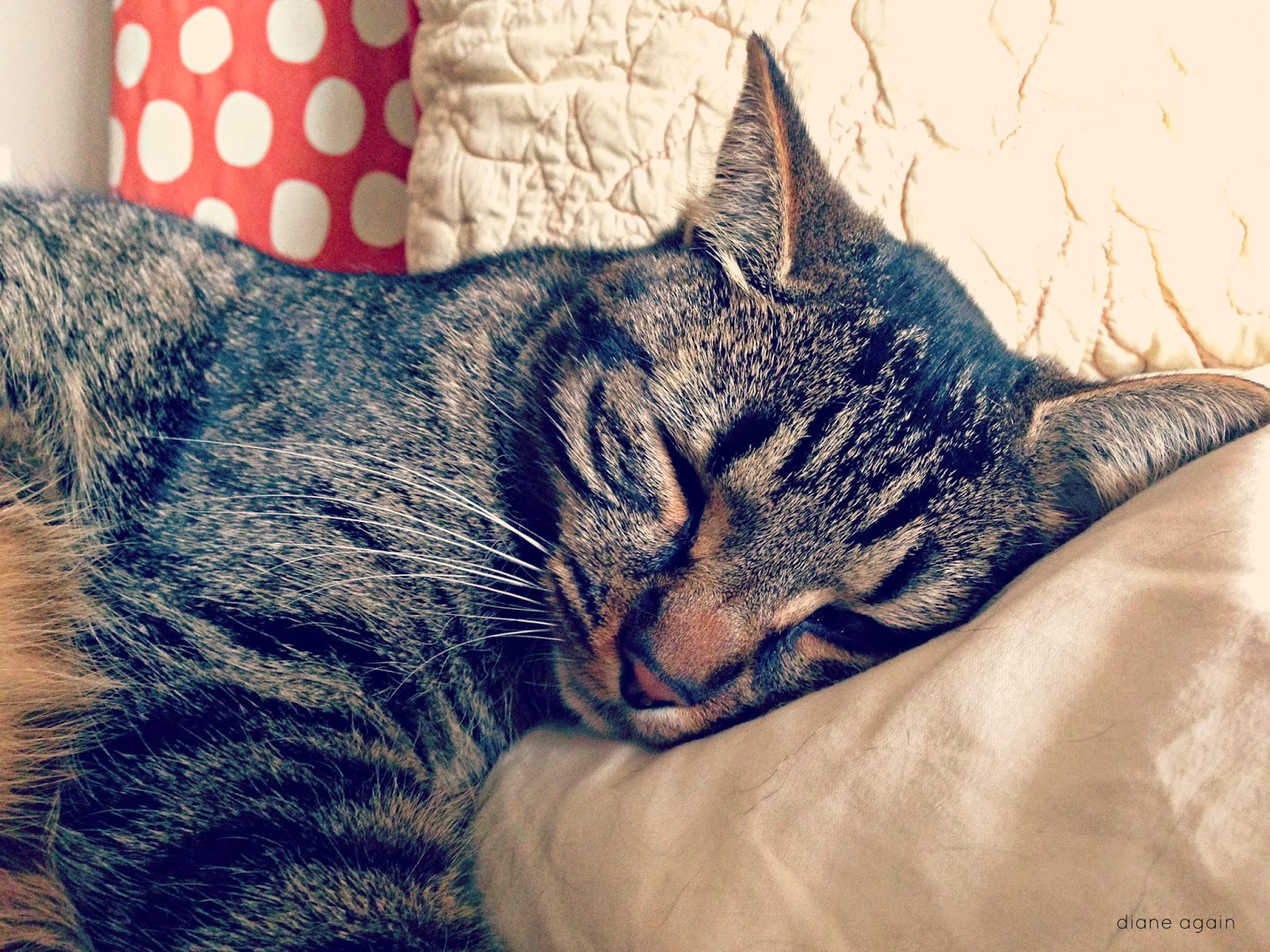 ^ Mother, I appreciate that you fluffed this pillow for me. Keep up the good work. 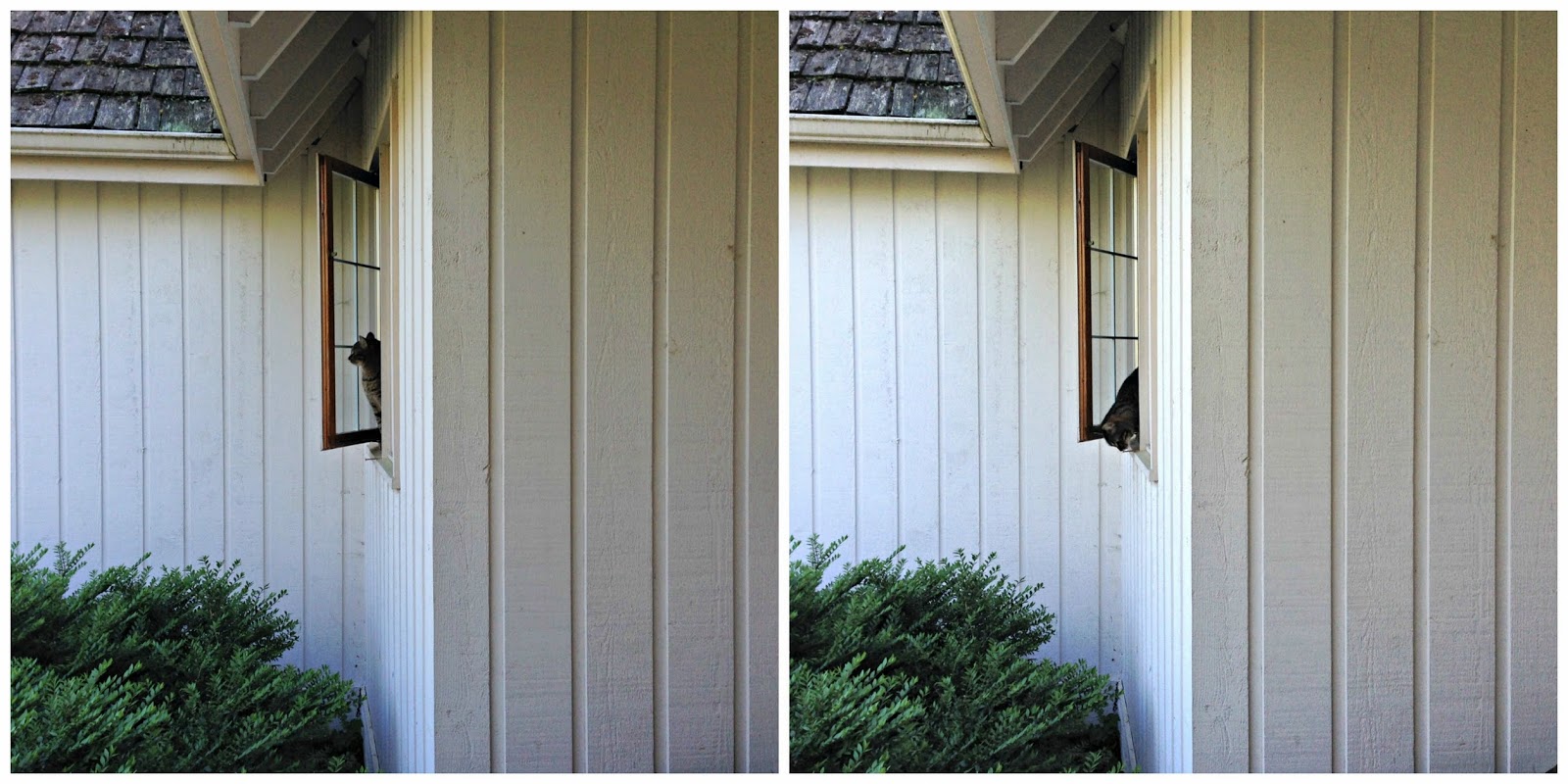 ^ Clearly, this open window was provided just for my entertainment. Shall I jump? 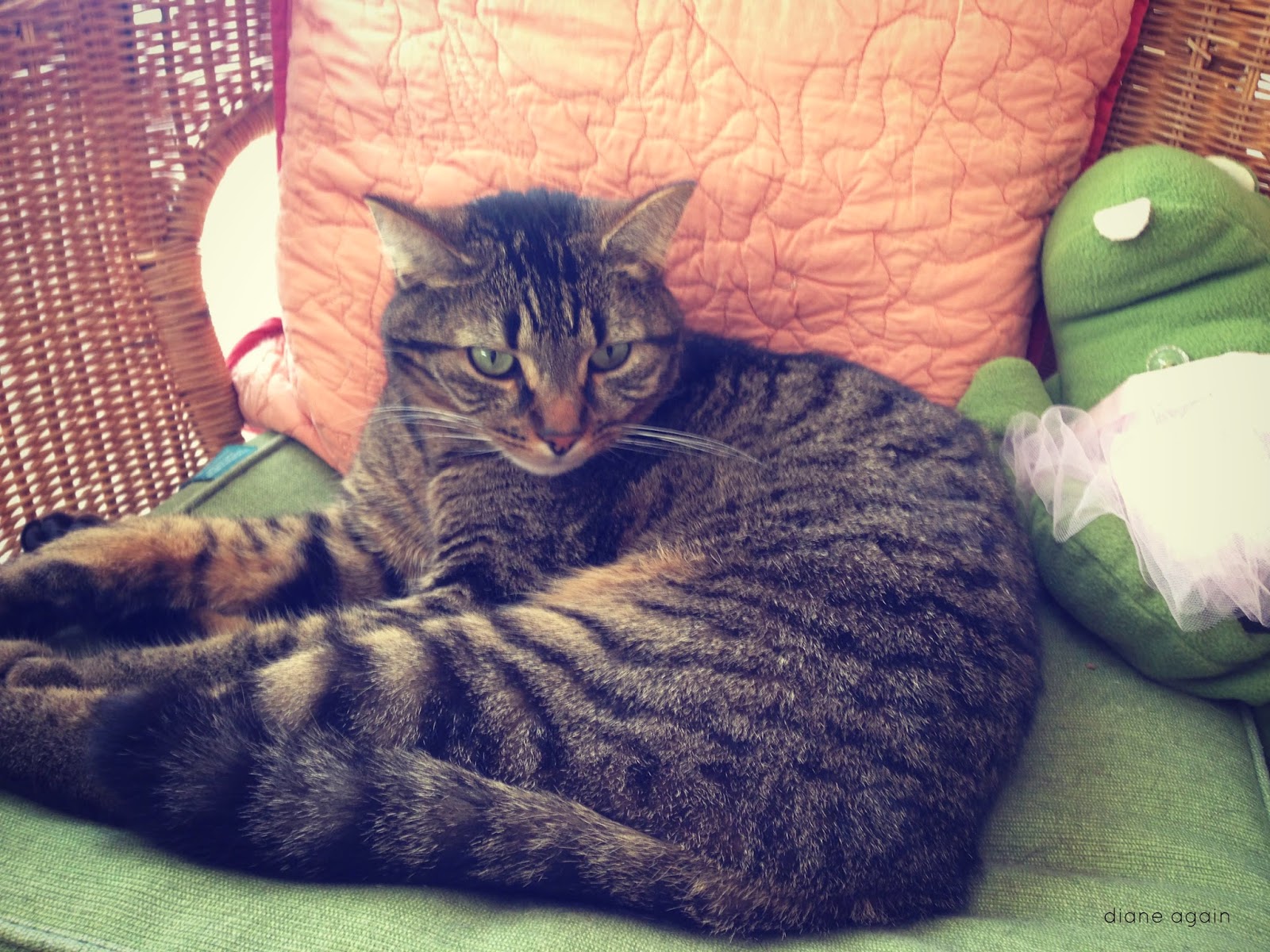 ^ If I turn my head just so, the sunlight will catch my eyes and bedazzle you with their emerald green.

This handsome tabby is named for Cedric Diggory, a star Quidditch captain and all-around popular guy as well as a Hufflepuff hottie. Yep, this cat nails that vibe. No one dares to arrange himself on a throne pillow quite like this regal dude. No one preens or purrs with quite so much satisfaction. No one struts across a sleeping human form to demand a bit of petting with the same level of swagger. Every step that our Cedric makes reflects his attitude that he is winning at all times. And that's why we call him The Prince.

We cherish our three fuzzy boys; we enjoy their distinct personalities and we have had a lot of fun comparing and contrasting them to their literary dopplegangers. Interestingly, there were two other kittens in their litter who were adopted by the same family, and I understand that they were named Calvin and Hobbes, after the boy and tiger in the old comic strip. Wouldn't you just love to see them together in action? 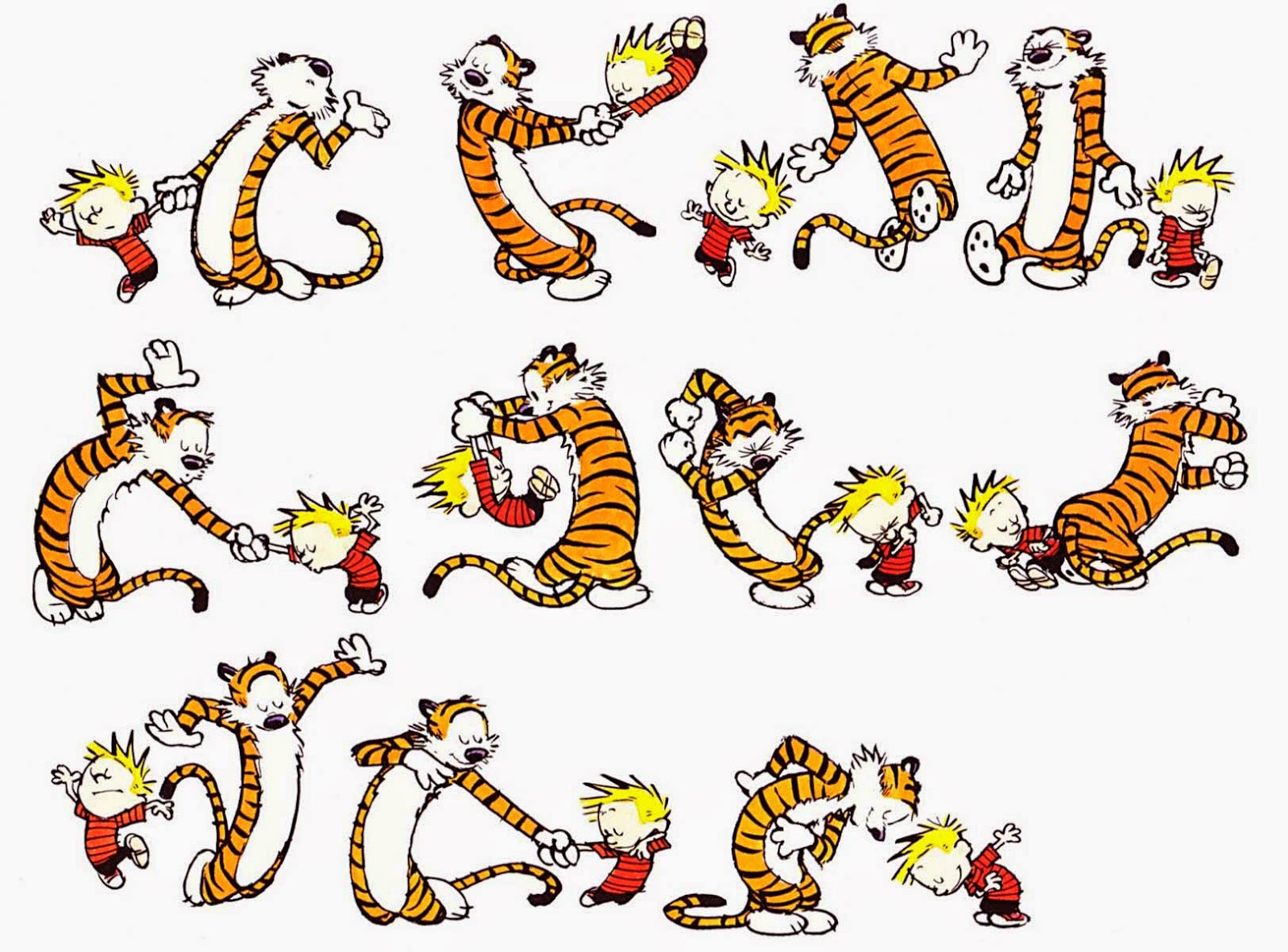 I've written more stories about my cats. But wait. That doesn't make me a crazy cat lady, does it?