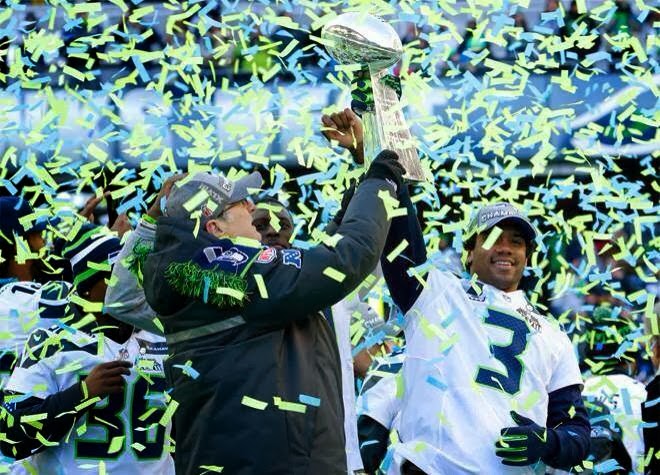 The champions' trophy goes up as the green and blue confetti rains down. (source) 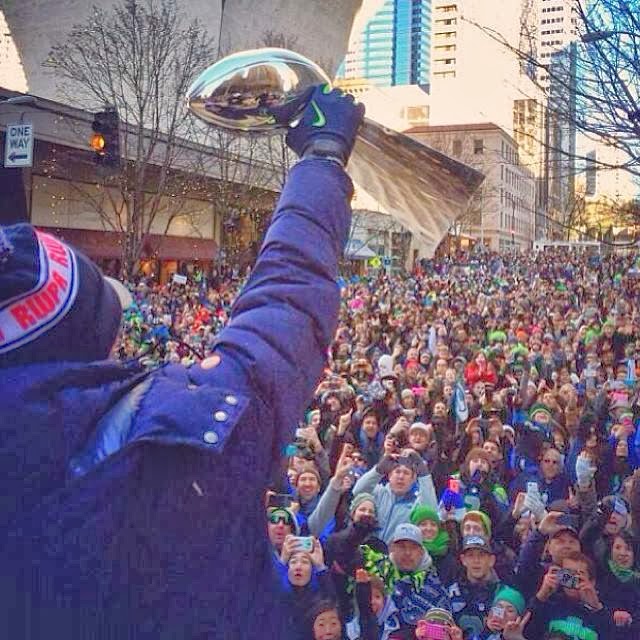 Life has been pretty crazy around Seattle this week.

Yeah. There was that whole thing about the hometown Seahawks winning the Super Bowl for the first time in franchise history. This city may have had to wait almost four decades for a football championship, but by gosh, we are making up for lost time.

The most notable act of celebration was Wednesday's victory parade. Somewhere upwards of half a million people braved sharp temperatures and jammed Seattle's unseasonably sunny streets to join the party. By all reports, the well-behaved crowd had a blast celebrating their team, and the gridiron giants were welcomed home in fine style. 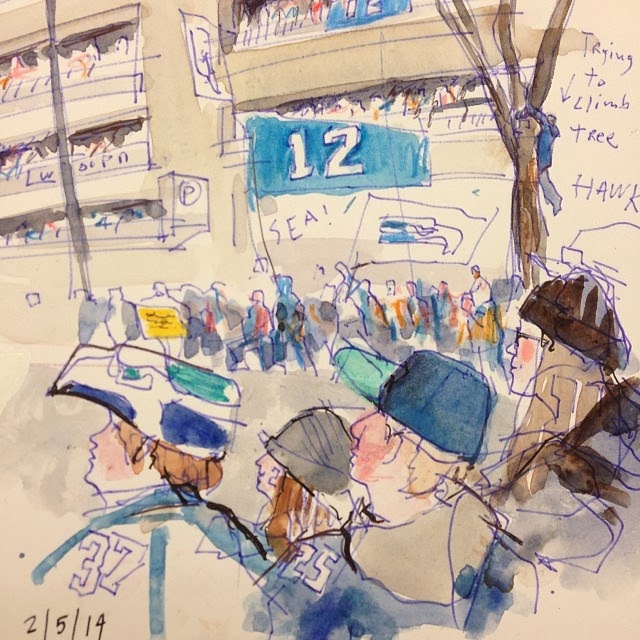 The Seattle Sketcher captured the festive scene in a few deft strokes of the pen. (source) 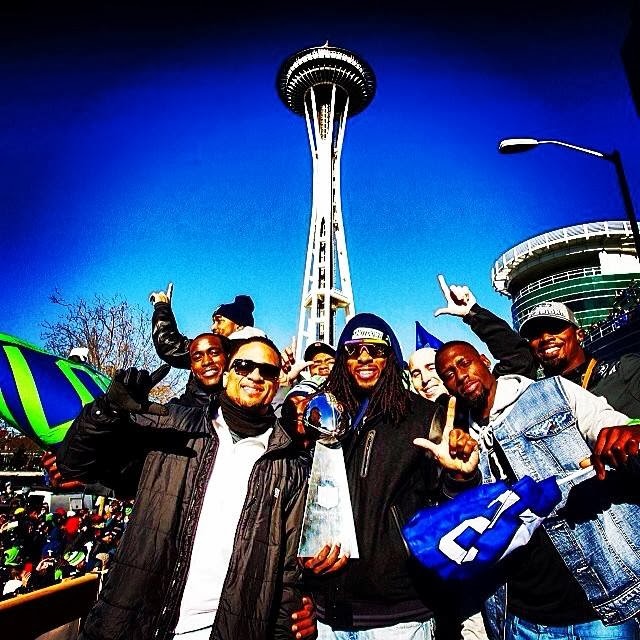 Leigon of Boom at the Space Needle. (source)


In many fans' eyes, these men are heroes. Bringing prestige and honor to our city's long-beleaguered sports tradition, the team members demonstrated impressive devotion not only to the game but also to each other, and serve as shining examples of what good can come of shared purpose and selfless teamwork.

Those are noble traits, and I salute the strong examples of manhood that the Seahawks provide, especially to their highly impressionable fan base of young boys.

Another one of Seattle's sons has also attracted some attention this week. And while his performance on the global stage is less visually impactful and commercially celebrated than the Super Bowl game, he also represents a legitimate, albeit different sort of hero.

I'm talking about scientist Bill Nye, who debated the scientific validity of the theory of evolution on a stage in Kentucky the other night. 
Sigh. Creation versus evolution. I know. This topic tends to tweak all of us, in one way or another.

Theologians have been outraged by science's explanation of evolution and natural selection almost as soon as the theories were advanced by Charles Darwin back in the 1800s.

And over the 150 years since then, there have been arguments galore, often flaring up in the court room over education issues. Experts on all sides state their case, time and again, but no one on either side is persuaded to change their mind. This seems to be a disagreement for the ages.

So when I heard about this debate, I wasn't all that interested. In fact, I just felt that familiar twinge of annoyance that hits me whenever this subject surfaces, and I fervently tried to put the whole combustible topic right out of my mind.

Then it happened. The link to the full debate popped up in my Facebook feed, right before my very eyes, on an evening when I didn't have much to keep me busy.

I couldn't resist. I watched it. All two and a half hours. And I was spellbound.

I'll give credit to Ken Ham, the Australian evangelist who prompted the debate and passionately spoke out for his belief in Creationism. He is a man of great faith. He has the guts to stand before an international and online stage of untold millions and say, "I put my trust in the word of God. Period. The End." And though I don't agree with his scientific reasoning, I can't help but admire his boldness. 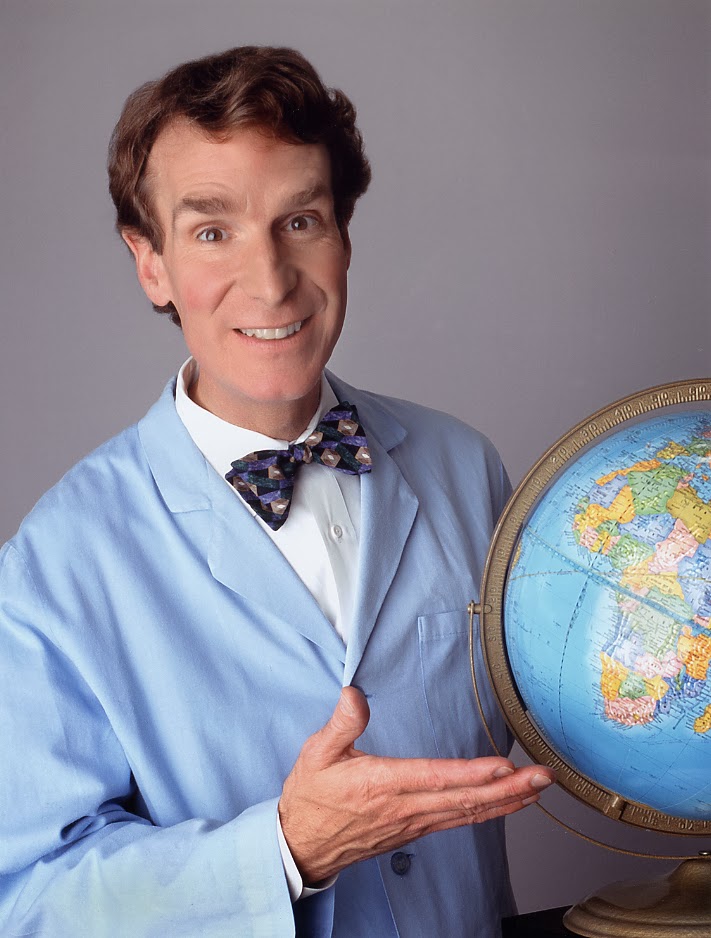 I used to watch his dorky skits on the local late-night comedy show, Almost Live!,
when he was just getting his Science Guy persona off the ground. (source)


^ Now consider Seattle's own Bill Nye, the legendary "Science Guy."  It's been said that he lost the debate just by showing up, suggesting that he was foolish to legitimize Creationism by agreeing to discuss the topic at all. But I admire his plucky optimism that perhaps some good could come from his efforts, and I applaud his patience and good-natured attention to scientific detail and careful debate as he presented his claims. His passionate soul, strong intellect, and gentle spirit impressed me deeply.

Now that all has been said and done, the pundits are clucking their tongues and shaking their heads, pointing out the obvious truth that this debate changed no one's mind, and the disagreements will rage on. And I agree with them.

Still, the Creation Debate matters because this event showed us the face of a different kind of hero.

Not the kind that suits up on Sundays to toss around a pointy brown ball with infinite speed, skill and style.

But a hero who will stand up for what he believes.
Who expends untold effort to articulate his ideas and understandings of the world.
Who extends courtesy and respect to those who oppose him.
Who passionately cares what today's children will learn about the world.

Bill Nye is a genuine hero and I truly hope that wherever he may be, the confetti is raining down.

If you don't have two and a half hours to invest in watching the full debate, here's a good summary edited by the Washington Post that comes in under five minutes.

My Twelfth Men
Tonight Is The Night
Beast Mode
Posted by Diane Streicher @ Diane Again at 2:58 AM