Teaching My Own: Fridays At Stevens Pass 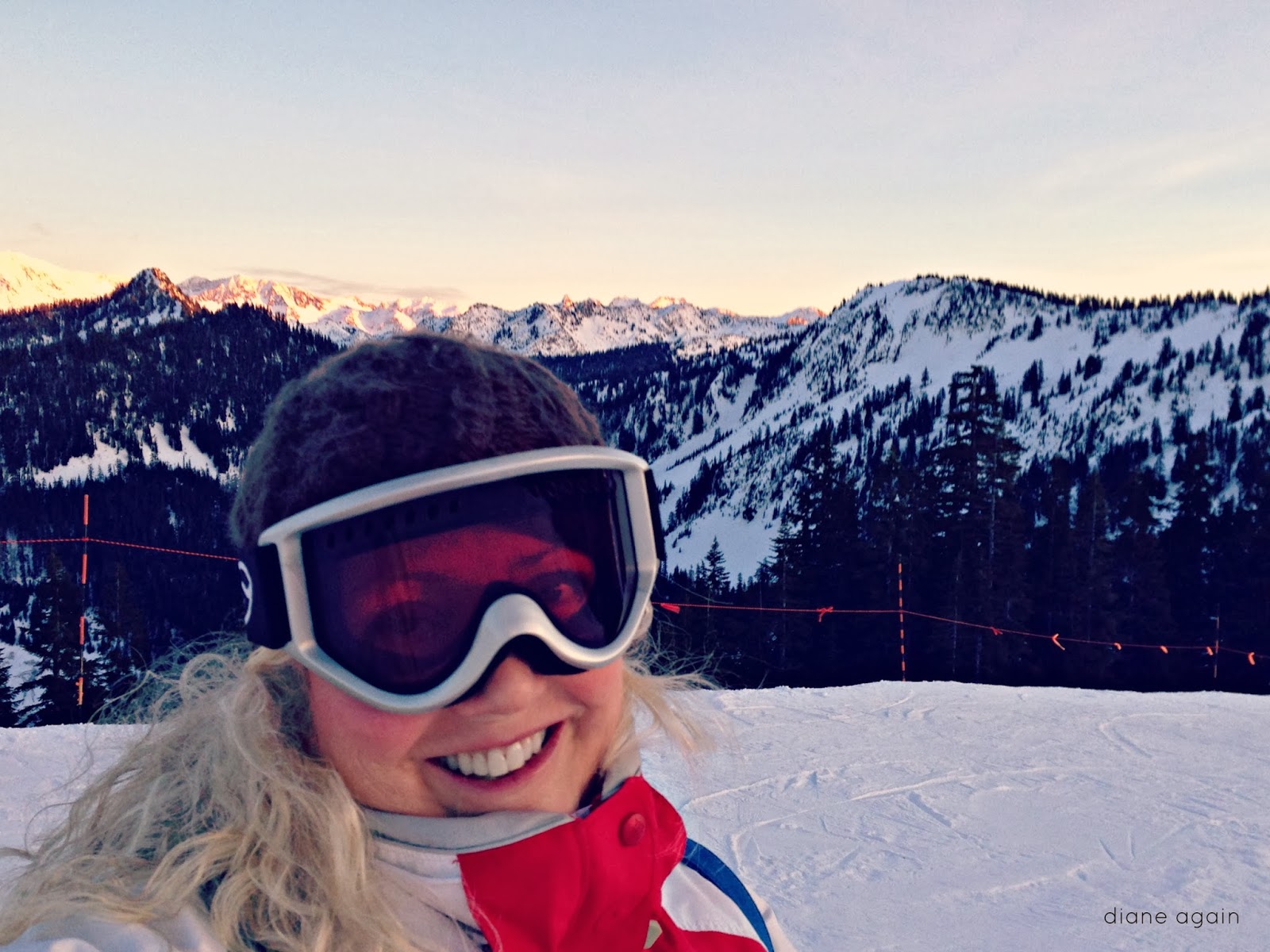 Today marked the end of an era in my life.

For the first time ever, I went to Stevens Pass on a Friday with...no one but myself.

I've had a long, lovely history of spending Fridays on the mountain with my family and friends, and here's the sweet story of how that came about.

Back in 2000, when my daughters and I started going to our school for homeschoolers, we fell in with a new group of friends and discovered that they were all snow bunnies. On winter Fridays, the whole lot of them would clear their schedules of other obligations (homeschoolers can do that) and head up to Stevens Pass for a long day of fun on the mountain.

Well, it took my family a few years to get in the swing of things. I had skied as a teenager, but my kids had never experienced snow sports. So there was cold weather clothing to collect, gear to save up for, and little girls who needed convincing that this was really going to be fun. But by the fall of 2003, my two youngest and I began joining the group, and fell in love with the tradition. 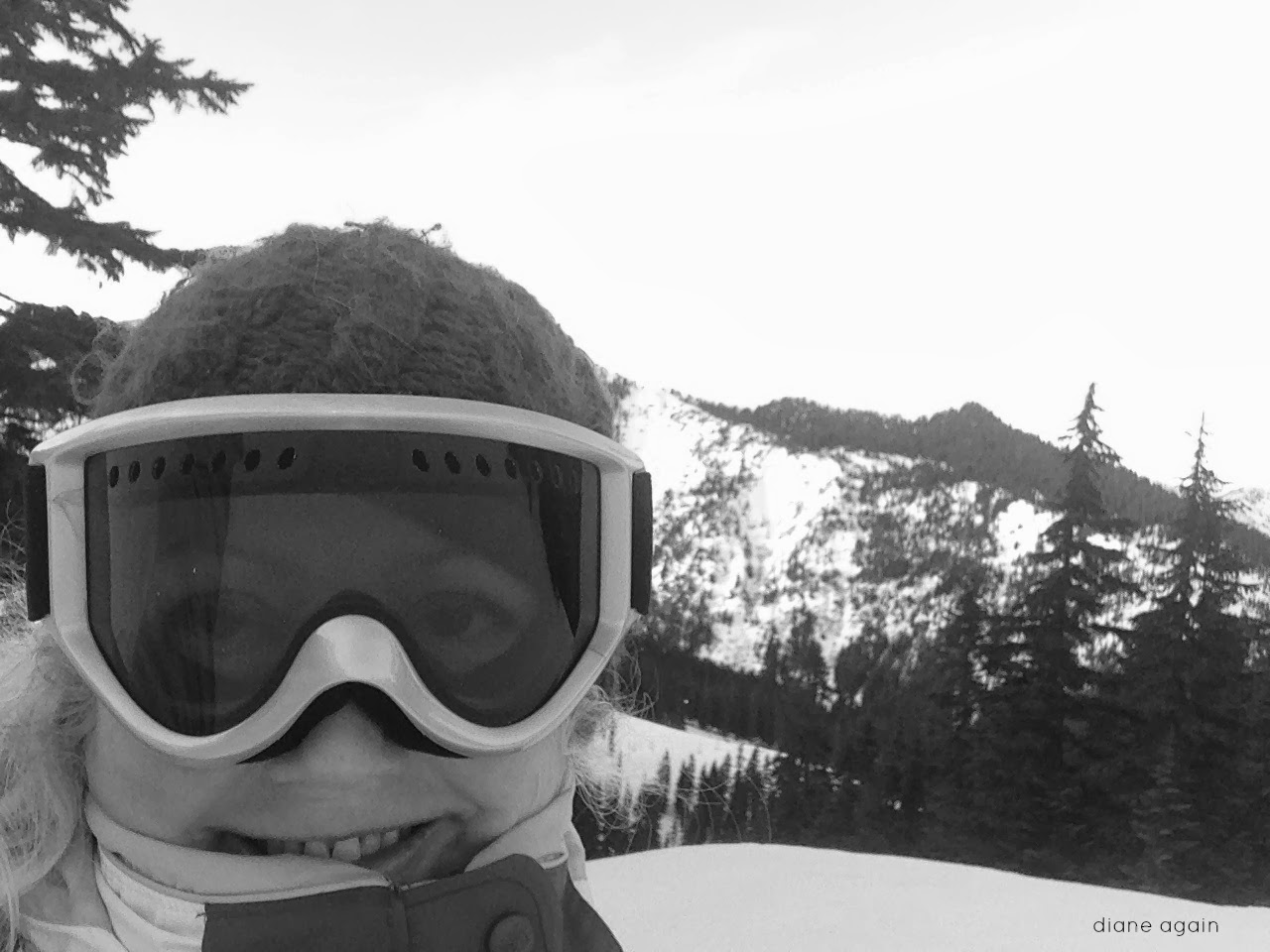 A huge crowd of kids would trek up each week, with a few die-hard moms and a cast of supporting parents who helped out every now and then. My friends and fellow skiers, Marilyn and Vickie, were charter members of the "Let's take all the kids up to the pass!" club. When they found out I had skiing in my blood, they drew me right into the middle of the action. Within a week or two, my van was stuffed full of kids, lunches, boards and gear, just like theirs.

We would start our 75-mile trip in the early morning, gathering at various check points as our caravan gained in numbers, working out the endless last-minute logistical complications so that everyone - EVERYONE - who wanted to come could get a ride. Can't even begin to count how many times I got a text before 7 a.m (or after midnight on the previous evening) from one of the kids saying, "Diane, can I get a ride?"

Eventually, inevitably, our parade would pull into the parking lot, where we would all spill out and trek to the lodge.

It wasn't unusual for our group to have 25 or 30 kids and us three skiing moms, as well as auxiliary mommies or a stray dad getting in on the fun. So when we burst into the lunchroom, heads turned. We'd take over a corner of the room, heaping our stuff on tables, chairs, window sills, on top of vending machines, under the tables, in the corners and across the floor. And then, magically, naturally, blissfully, the kids would break off into groups of threes and fours and head out to the snow. 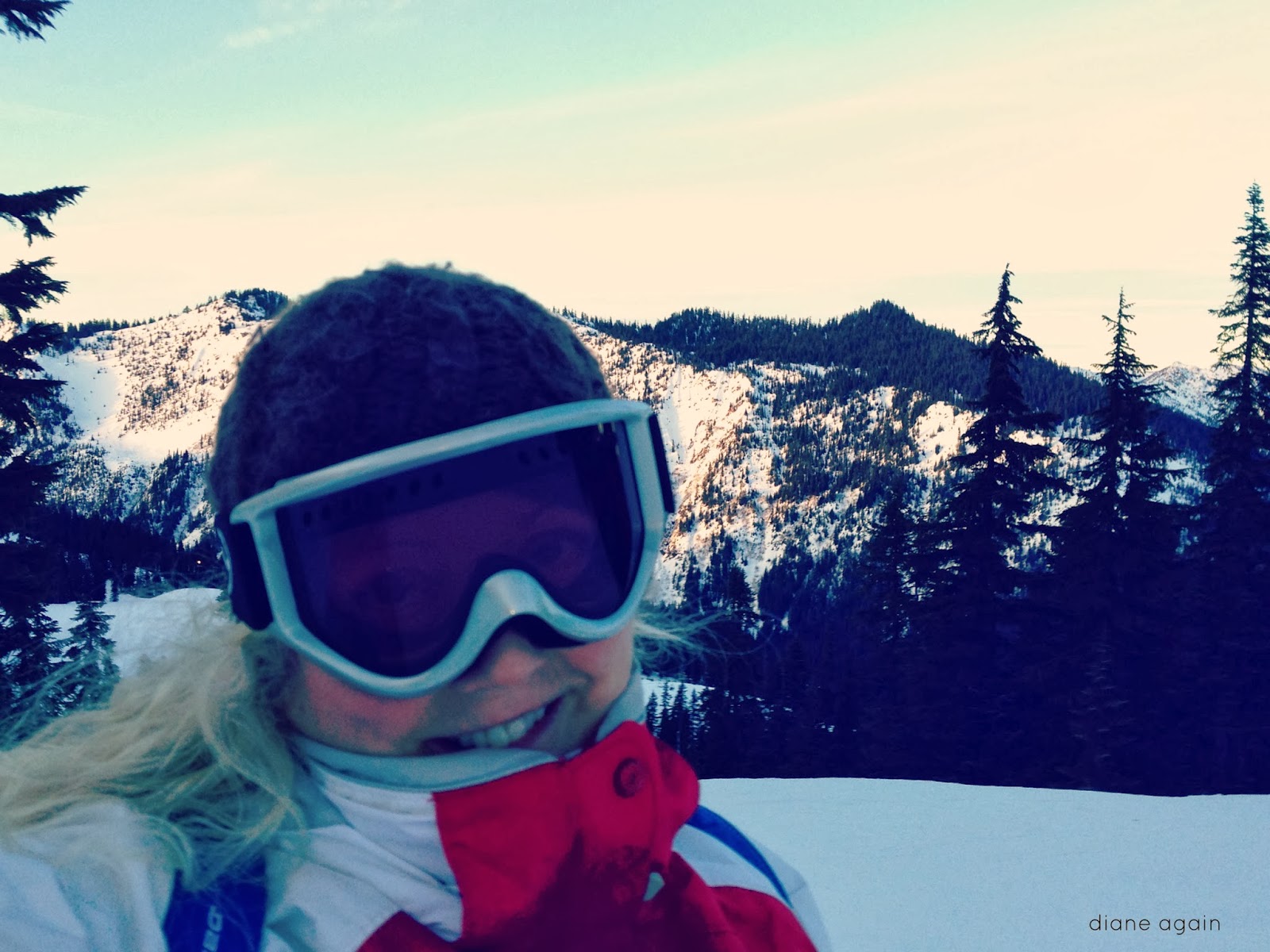 Sometimes we moms would ride with the youngest kids, but often times, they would ditch us and we would take some runs by our own adult selves. It was bliss to get a few moments of lovely peace after our hectic start to the day. But even more so, we treasured the fact that our kids could head out into this snowy playground and we could simply let them go. They knew how to be safe, the stranger danger was almost nil, and we mommies rejoiced that in this crazy, hectic, messed-up world, there was still at least one place where young people can safely roam free.

And it was always a joy to bump into our kids out on the mountain. We would hear a group of our girls singing from the tops of their lungs on the chairlifts, see the boys thrashing in the deep powder, or come across a small flock of them sitting on the side of the mountain, just resting and relaxing in the middle of their run. Sometimes we would catch their amazing wipe outs from the chair, and hoot and howl down to them in admiration.

Just as enjoyable was lunch time. We set no timetables or rules about checking in, because busy kids are hungry kids and it was never long before sharp appetites brought us all back inside. I loved watching them come stomping in from the cold, bright pink cheeks and scarlet ears, pulling off snow-caked clothing and breathlessly sharing the details of their highest jump, steepest drop, deepest pow, or wildest crash. Out came the Cups O'Noodles, ham sandwiches, hard-boiled eggs, string cheese, Muddy Buddies, and always, Diet Coke. Together, we would eat, laugh, tell stories, massage our aches and pains...and then it was time to look for some dry clothes and head back out again.

And that's how our Stevens Pass Fridays unfolded. Ride and eat, ride and eat...every few hours, the cycle would repeat. By four or five p.m., a small group might have to break off and head home early, but most of us stayed till eight, nine or even closing time at ten. Then we would reverse our direction, straggling out to the cold vans with a trail of wet gloves and granola bar wrappers, pile in and head down the mountain. In my car, we took turns choosing the music, listening to Boys Like Girls, Weezer, or the soundtrack from RENT as we bee-lined it to McDonald's for one last meal before we rendezvoused with waiting parents and went our separate ways. 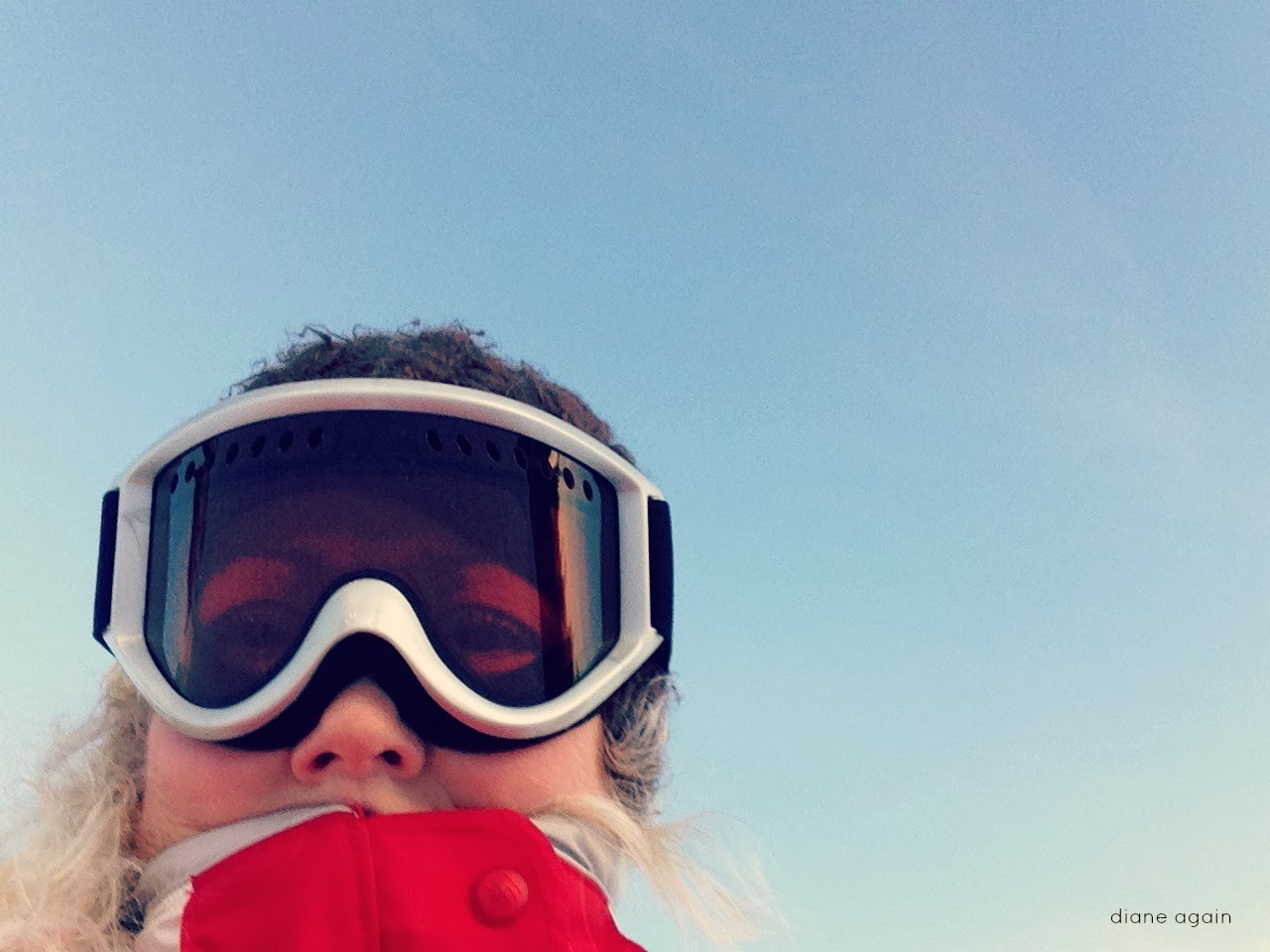 Those were our glory days. By 2007, many of the kids were well into their teens, and Friday college classes as well as work schedules cut into their free time. My third- and fourth-born, and Marilyn's two youngest, who all happened to be best friends, eventually found themselves as the sole keepers of the tradition. When Marilyn found a job with evening hours, the group dropped down to just my kids and me. The past few years have been dicey, as my girls have moved on to college, but we've been able to work it out so that one or the other has accompanied me each week.

Until today. When I was all alone.

Now I don't mean to say that our whole group has given up on Stevens Pass. Not at all. Many of them still ride - in fact, I bumped into a pair of now-twentysomething girls from our group in the bathroom at the lodge last Thursday, and we had a sweet reunion. And others who have moved away may be hurtling down different mountains each and every Friday, for all I know.

But as far as I can tell, no one else from our group is still spending Fridays at Stevens Pass.

Unless one of you is reading this, and wants to join me next week. I'll definitely be there.

Maybe that will be the start of a new era. 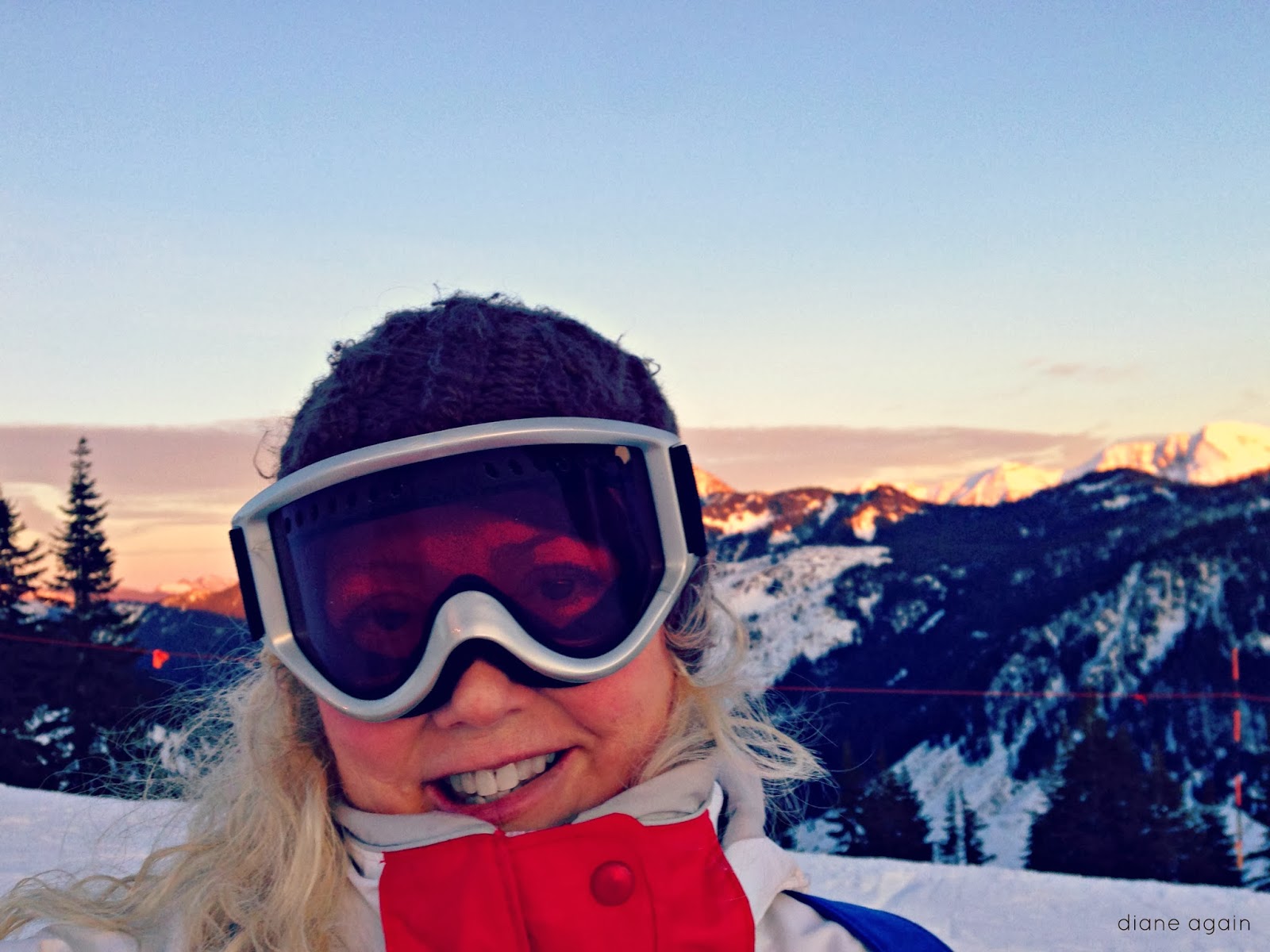 Gee, But It's Great To Be Back Home
Washington Dreamin'
Here It Comes
Good Enough
Mountains And Clouds
An All-Mountain Day
Beast Mode
Valentine's Day Musings
Going Up
Ordinary
Treasuring The Memories
A Dreamy Day
Posted by Diane Streicher @ Diane Again at 11:47 PM

Email ThisBlogThis!Share to TwitterShare to FacebookShare to Pinterest
Labels: Inspired Learning, Travels Near and Far