Today, my heart has been full of memories of my pets. I've had a lovely handful of animal friends throughout my life; let me share them with you. 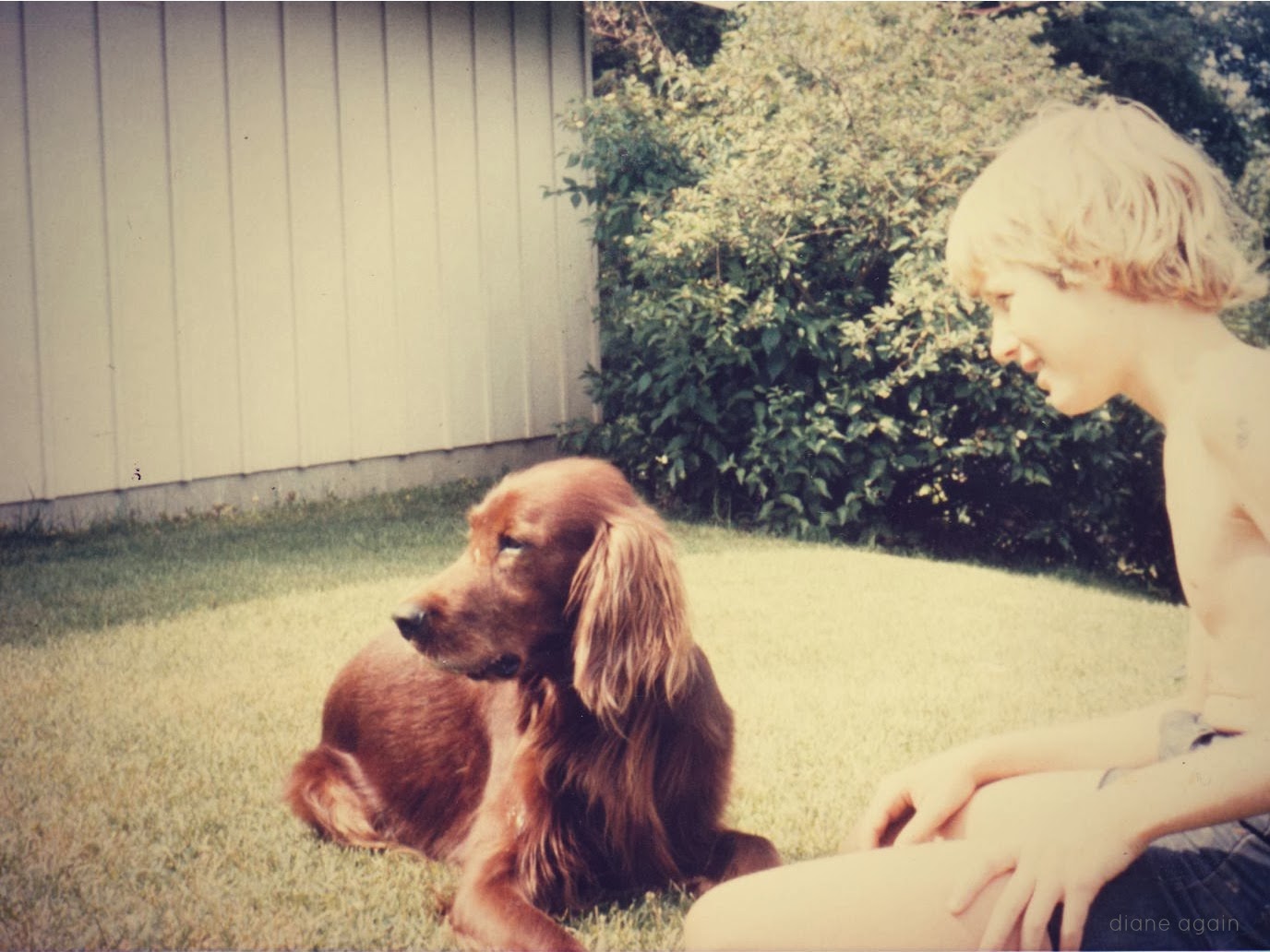 ^ When I was ten, this furry lad entered my life. We named him Kelly and quickly fell in love with him. Full of Irish charm, as all Irish setters seem to be, he lived an adventurous life roaming our lake country paradise. Once he stole the ham off the Easter dinner table, which nearly caused my grandfather to have a stroke. My youngest brother, pictured here, used to stand over him and ride him like a motorcycle. Kelly lived just ten short years, but packed them full of hi-jinks and hilarity. ^ One week after graduating from apartment life and moving into my new home, complete with a fenced-in back yard, I jumped on the phone for a pre-internet Google search and scoured the country to find my very own Irish setter pup. This little rascal was waiting for me in Kansas, and took a flight to Seattle all by himself to start his new life as a Pacific Northwest family man.

Casey was our first-born, yet quickly adjusted to the four new babies that joined the family in the next few years. He had his wild moments - he routinely jumped my six-foot fences in a single bound and led me on many a merry chase around the neighborhood when he found an open door. But when it came to the endless stream of visiting babies and toddlers that crawled, chewed, manhandled, and otherwise doted on him, Casey shared infinite patience and gentleness. He lived fifteen blessed years and was spunky and sweet till the day he died. 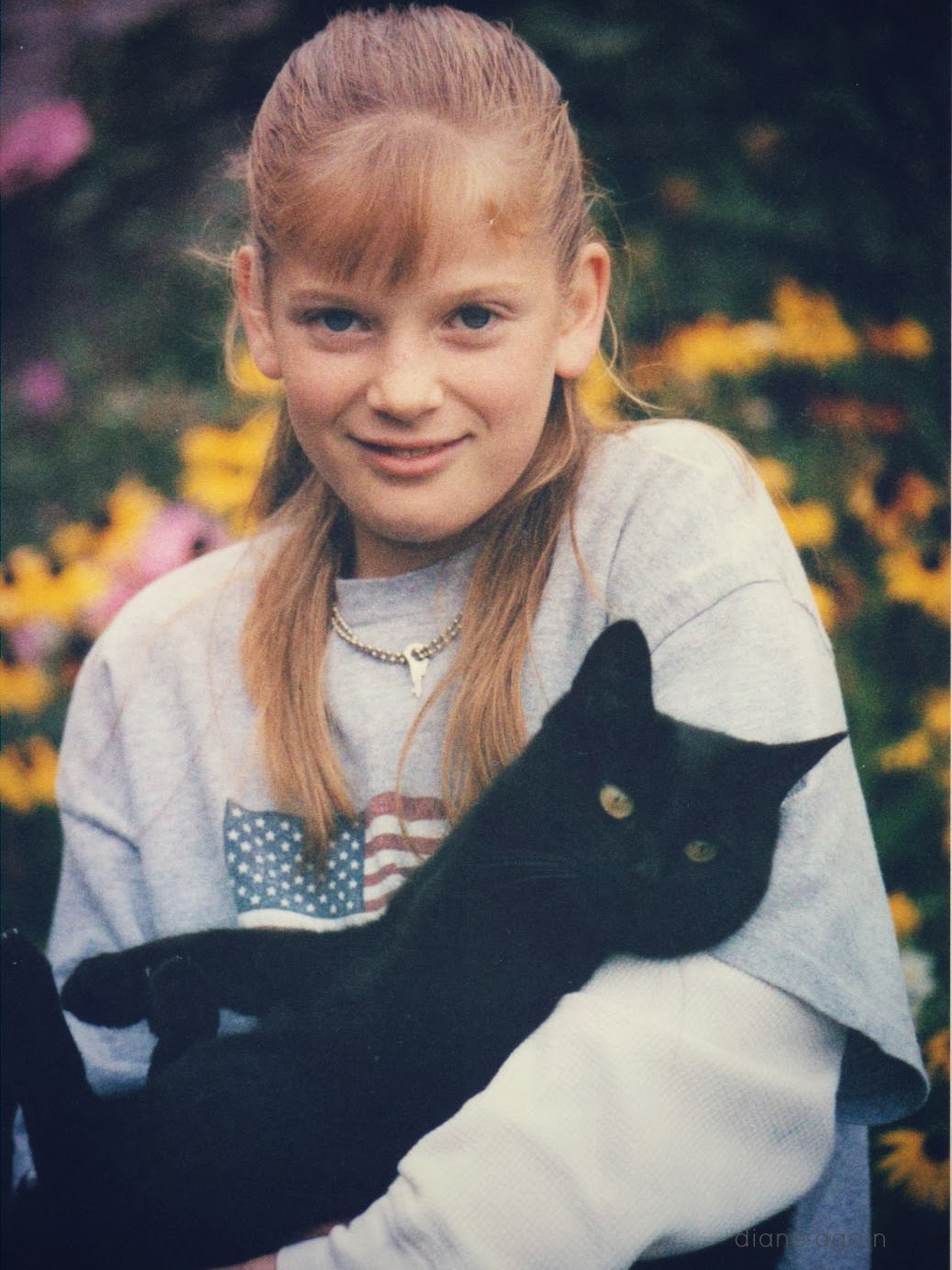 ^ I never fancied myself much of a cat person. But borne unto me was this little lady, my second daughter, who adored her dog yet simply craved a cat. One day, when she was seven, we were playing outside at a friend's house and heard a strange chirping. Upon investigation, we found a shivering black kitten, hungry and obviously homeless, hiding in a blackberry bramble. We took her home, fed her tiny tummy, named her Blackberry, and thus, our life as a cat family began.

Delicate and sleek, sassy little Blackie had a tail that flipped up like a husky, and loved to rub up against the legs of everyone who arrived at our door, including about fifty Girl Scouts who came for meetings each week. After five years, she disappeared as mysteriously as she came into our lives, and that's when I knew beyond a doubt that I could indeed fall in love with a cat. 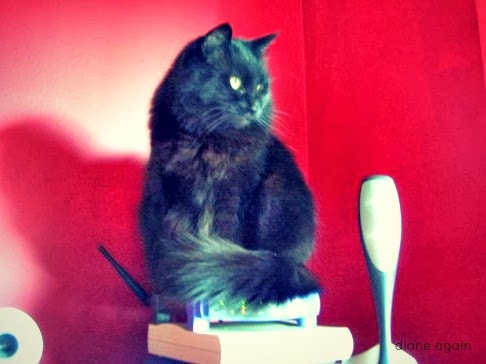 ^ When Blackberry disappeared, I checked in with several neighbors to let them know I was missing a black cat. Within two months, I got a call from one of them, saying, "Hey, I think I found your runaway!" Excitedly, I rushed over, but as soon as I caught sight of this newcomer, I knew it was not mine. "But he's such a nice kitty," advocated my friend. "Maybe you could adopt him." This tender-hearted fellow had a shaggy coat, soulful green eyes, and sadly, a major injury on one of his paws, which earned him the name of Padfoot.

Poor Padfoot was quite traumatized at the start of our life together. For the first six months, he lived up in our bedrooms, too timid to venture down the stairs. Over the seven years he spent with us, Padfoot slowly gained confidence and became a curious and friendly kitty, even in a house that was often full of rowdy teenagers. Tenderly, he sensed my grief when Casey died, and took up a special connection with me. Many a Sunday afternoon nap did I take with Paddy curled up on top of me. When his time came, I held him in my arms as he died. Precious, gentle soul. 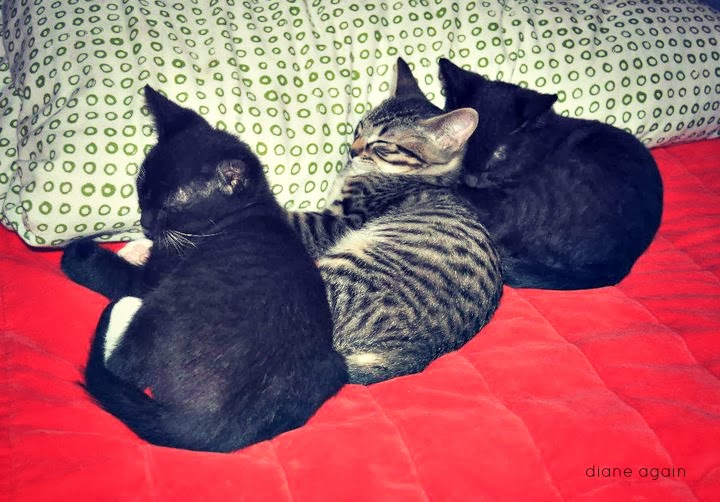 ^ We were catless for several years after Padfoot's passing. I wasn't against getting a new cat, but somehow I felt that we were supposed to wait until the universe handed us another furry orphan. And sure enough, our destiny was eventually fulfilled...in triplicate! A litter of abandoned kittens was being fostered by a friend of a friend, we were informed; perhaps we would like to adopt one?

Well, one thing led to another, and we ended up with a trio of happy brothers. Now three years old, Sirius, Cedric and Luna (who was originally thought to be a girl) hold wild romps downstairs in the middle of the night, and appear regularly at second-story bedroom windows where my daughters are trained to open up and let them in. Each zany bro has his own distinct personality and we love them all. 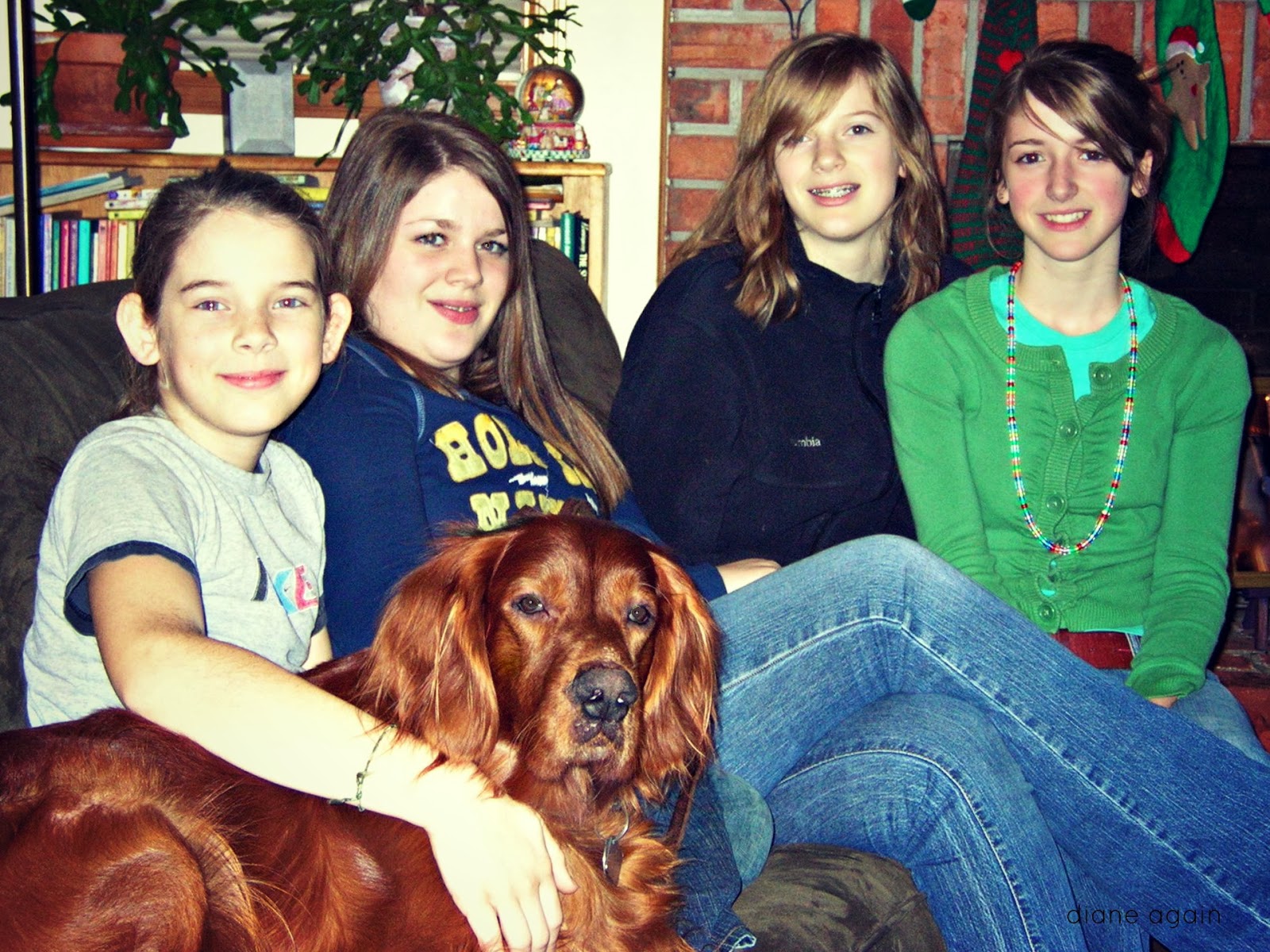 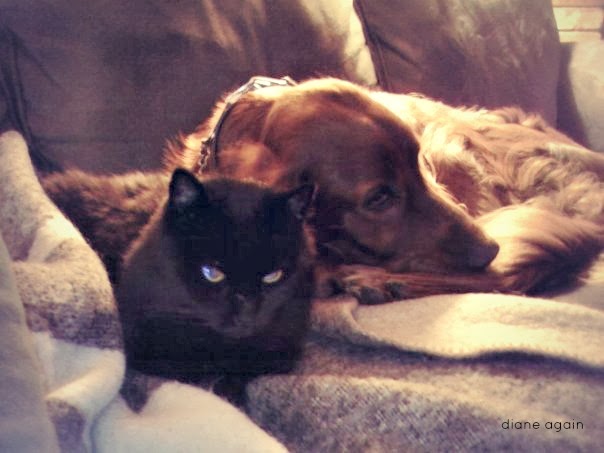 ^ And then there's Ranger. Two years after losing Casey, my heart finally felt ready for a new pup, and I tracked down this boy in my home state of Michigan. I imagined a quick cross-country trip to pick him up, but wouldn't you know that car trouble struck and turned our simple mission into a three-week-long exercise in complications and delays. Little Ranger took it all in stride, learning to potty train in hotel rooms, barking his tiny puppy barks at wild bison at Yellowstone National Park, and traipsing from one pillowed lap to the next for his never-ending naps in the car.

As he grew, Ranger bonded to everyone in the family, including the various cats (as shown with Padfoot above), but he took a particular shine to me. He's been my constant companion these past ten years, following me from room to room, breathlessly anticipating our daily walks, and sleeping curled against my legs. We are tight, Range and me.

This week, we had a bad scare. A strange bump on Ranger's tail led us to his vet, who feared cancer in all its ugly extremes. Happily, the test results came back today and my dog is clean as a whistle. While he still faces surgery, Ranger's future is bright and I am insanely grateful for more time with my sweet boy.

Tonight, I count the blessings that these three red-headed Irishmen and five funny cats have brought into my life. I miss with all my heart the ones who have gone, and I remind myself to appreciate every single day I have left with the ones who are with me now.

I kind of love telling you about my furry friends. Click here to see all my Pet Love stories.

And for updates on Ranger's health, read:
Say What??

I've written more stories about my cats. But wait. That doesn't make me a crazy cat lady, does it?