Today, at the request of my third-born, I went on a roller coaster junket at a local theme park.

Here's the thing. I used to love roller coasters. I loved the dead drops, the tight turns, and most of all, the raw speed of a good ride. But then, about ten years ago, I rode a big coaster back-to-back-to-back, three times in a row, and basically overdosed my brain. Ever since, motion sickness takes me over when I so much as look at a roller coaster, especially one with 360 degree spins. I've kept my distance.

But my third-born was itching to ride every coaster in the park, and my fourth-born, who came along too, has her own reservations about daredevil rides. So as we walked through the park to the belly of the biggest beasts, we agreed to start with a few simple rides and progress slowly up to the heart-pounders, giving us chickens a chance to work up our nerve.

First up: the carousel. Yes, I think I can handle that. Bring it on. 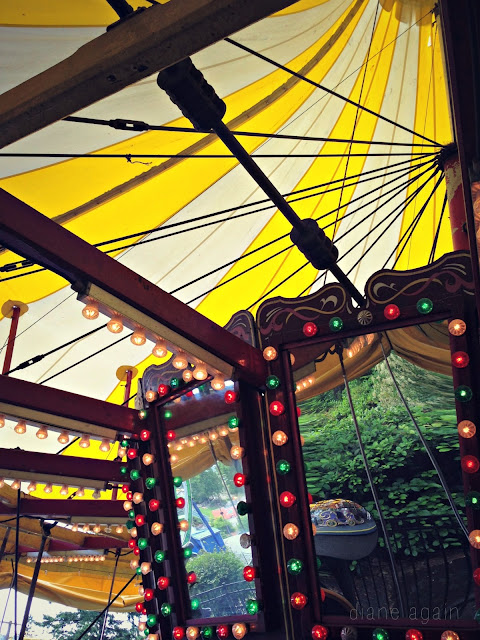 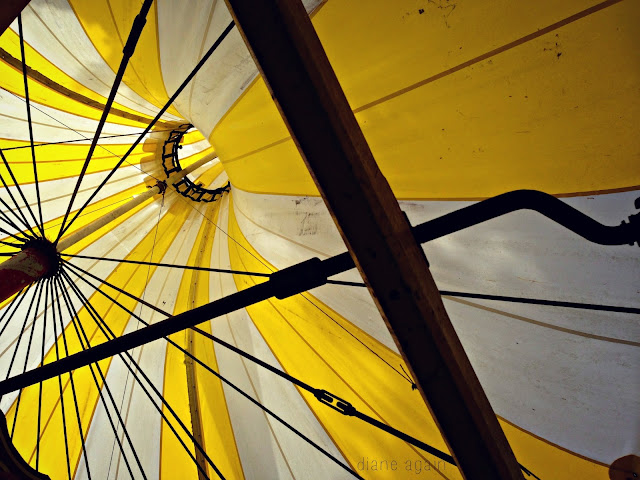 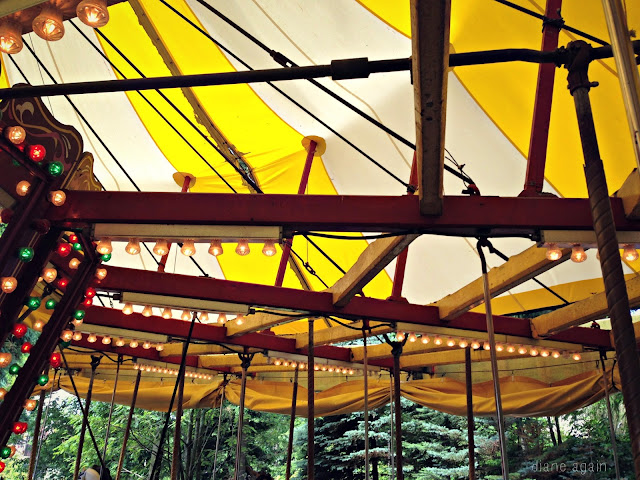 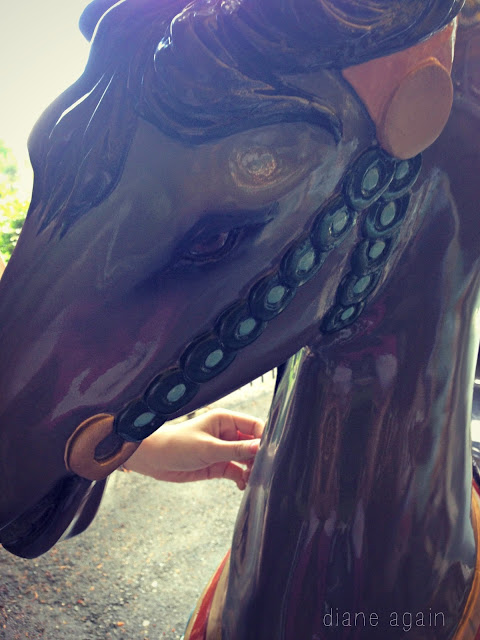 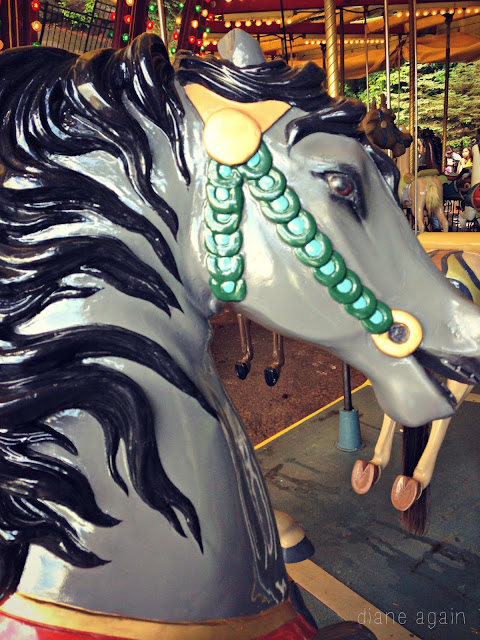 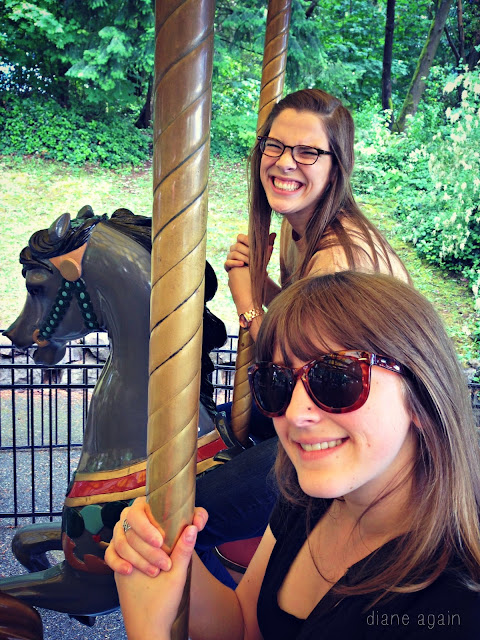 Yes, they are smiling weird on purpose.

Okay, now my fourth daughter and I were feeling pretty good. Obviously, the merry-go-round was about as scary as sitting on grandma's lap, and happy and relaxed, we quickly fell into a walk down memory lane, reminiscing about the many times we visited this park with groups of fellow homeschooling families in years gone by. So many sweet stories and funny adventures.

Hmm. But this conversation stirred up a troubling memory in me. On a long ago trip to this park, my friend, Marilyn, and I had made a pact. Do something every year that scares you. As two women cut from the same crazy cloth, we have encouraged each other over the years to push our limits, try new physical and psychological challenges, and generally refuse to get old and timid.

Dang it. What would Marilyn say if she knew I was wimping out on roller coasters?

This gave me a lot to think about.

In the meantime, my little coaster aficionado had marched us up the hill to the Timberhawk, one of the biggest rides in the park. Forget about taking it slow, she urged us, let's just dive in and do this!

Ughhh. This is the dizzying monster that had broken my spirit years ago.

What can I say. I was weak. I lost my nerve and waited on the sidelines while my daughters bravely jumped in and rode off. 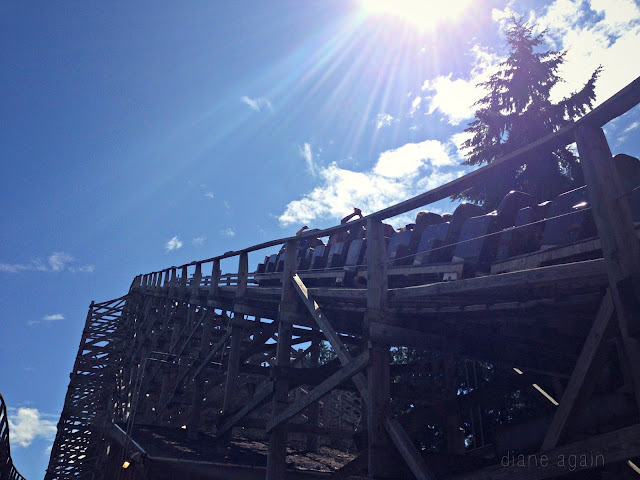 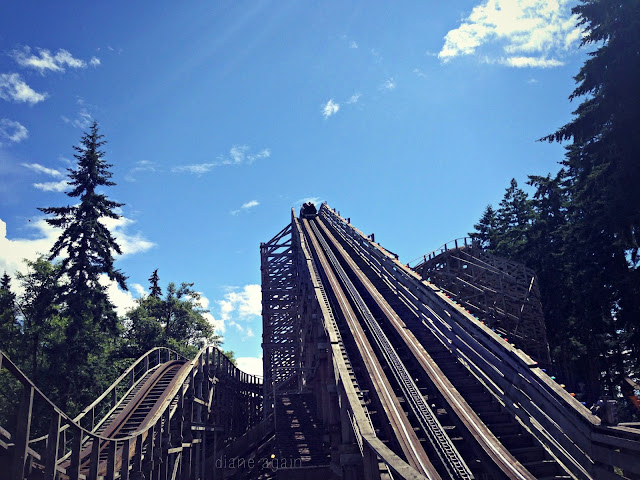 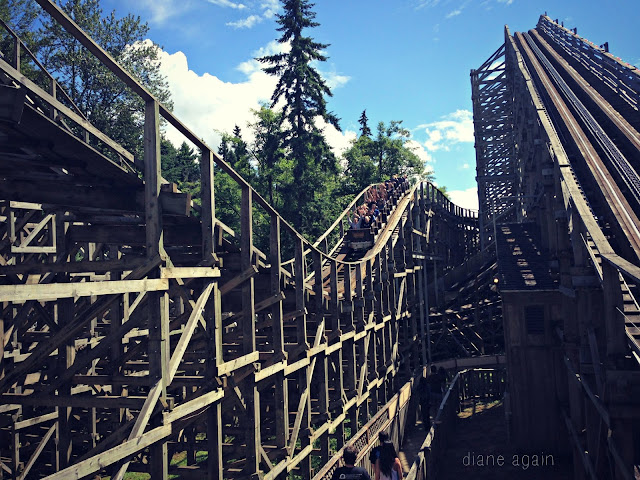 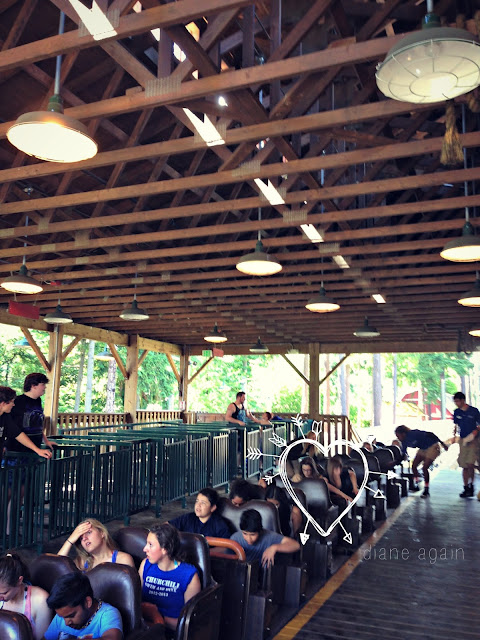 Yes, I was embarrassed and ashamed of my coaster cowardice.

Yes, the words of my longstanding pledge with Marilyn burned in my ears.

Yes, I was determined to do better.

So then this happened: 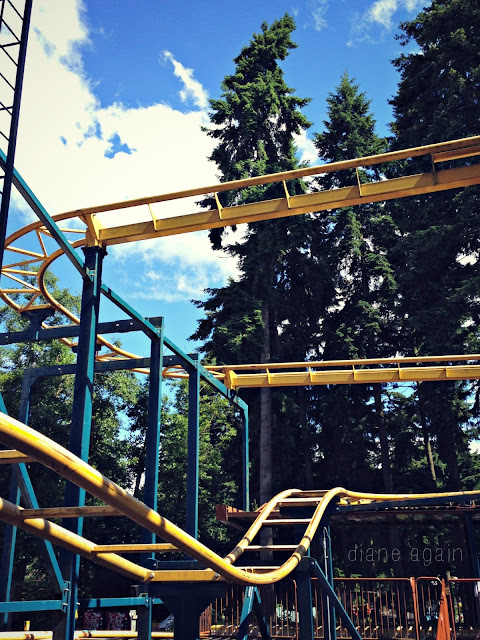 After sending ourselves through the series of dizzying drops and spins that these lesser coasters had to offer, we were in need of a break. We wandered through the woods, drinking a coke Icee and taking in a few tame rides until our heads began to clear. 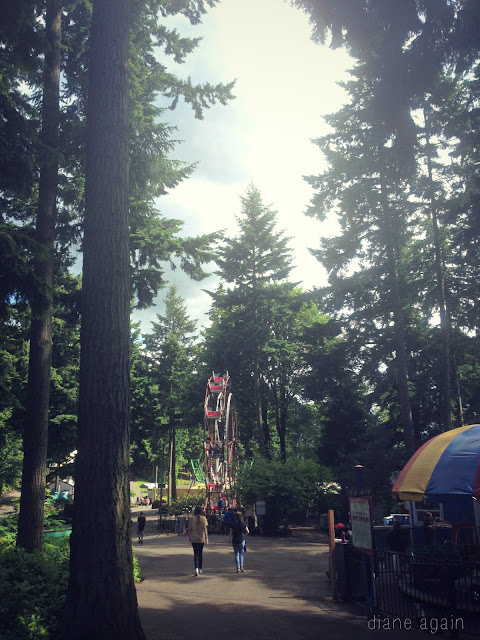 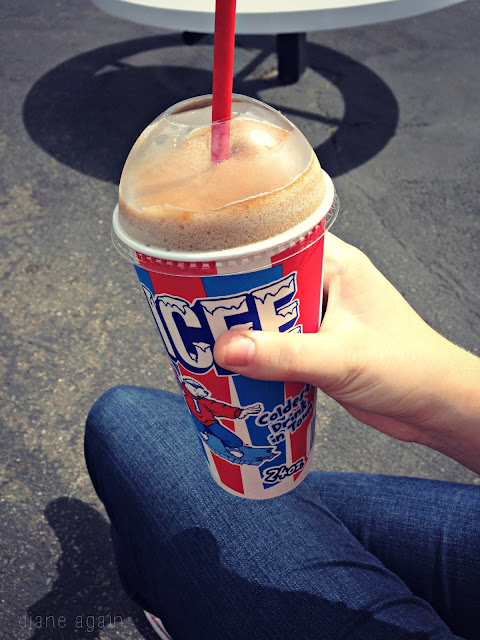 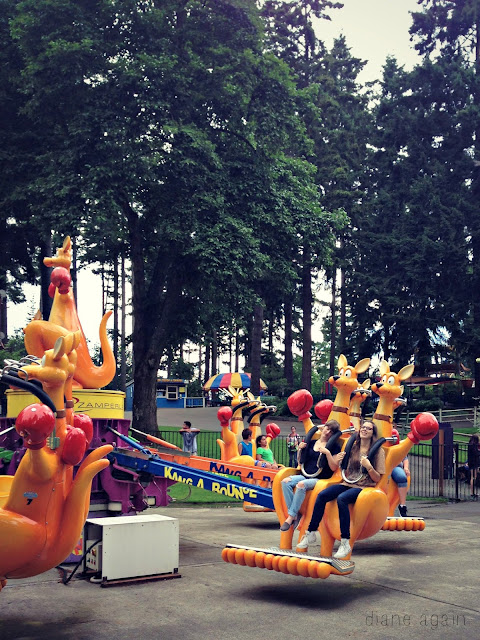 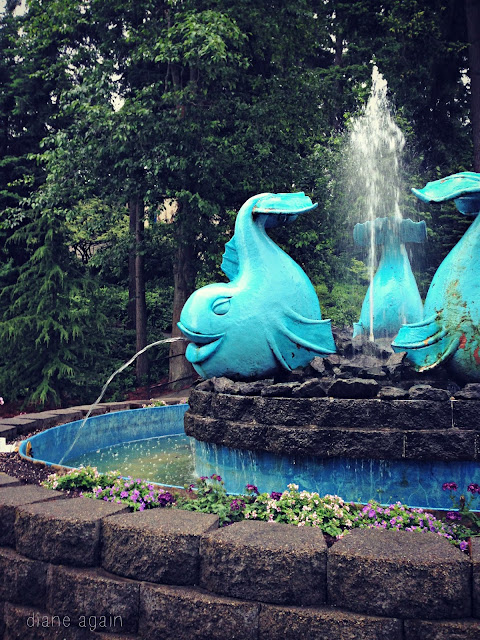 It was at this point that we noticed that the western horizon was filled with advancing black clouds.

As soon as we saw them, I immediately knew what Daughter #3 was going to say:

"We need to ride The Wild Thing before it rains. Will you go with me?"

Double dang it. The Wild Thing is an amped-up metal coaster with three corkscrew turns and two full loop-the-loops. That's a total of five 360 degree rotations. My motion-sickness-fearing brain was screaming "Noooooo!" as I heard my voice say:

We quickly dashed through the entrance and up the steps toward the platform as I soothed myself with calming reminders.

I've been on this ride before. It's not that bad.

My stomach is empty, my mind is clear, I feel great.

I will be calm and relaxed, and just go with the flow.

Rounding the last turn in the stairway to face the loading platform, we arrived just in time to see a 20-ish-year-old young woman stumble out of a car that had just pulled into the station. She crawled to the far side of the waiting area and leaned her head against the wall, moaning in misery. Her face was ashen, and she rubbed miserably at her legs. Her friends quickly attended to her, with grave faces and serious concern.

Triple dog dang it. This was not what I wanted to see.

Momentum carried us into the waiting car, and we quickly buckled our seat belts and pulled down the harnesses while the attendants helped the poor woman.

And that's when I felt the panic surge through me. My adrenalin was pumping, my fear was raging, and all I could think about was getting out of that car and running as far away as possible from this hellish place.

But I didn't. I thought about my pledge to Marilyn. I breathed slow and steady. I brought all of my powers of reason and rationality to bear on the situation.

As our car clanked up the big incline, and I thought about the dead drop that was just seconds away, I turned to my third-born, smiled, and said,

Then the car topped the hill, raced toward the ground, and my mind went blank. 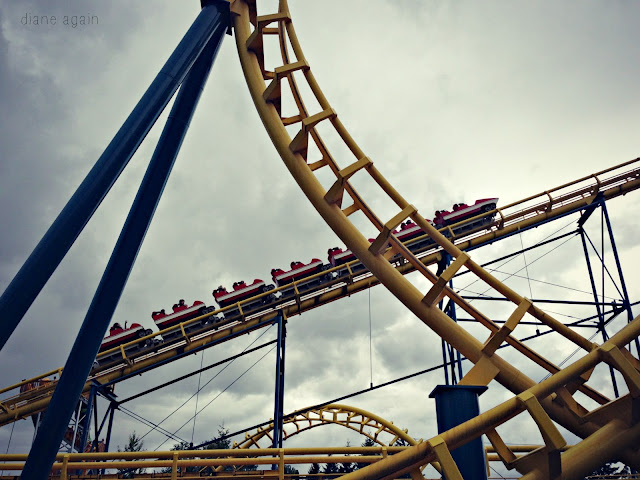 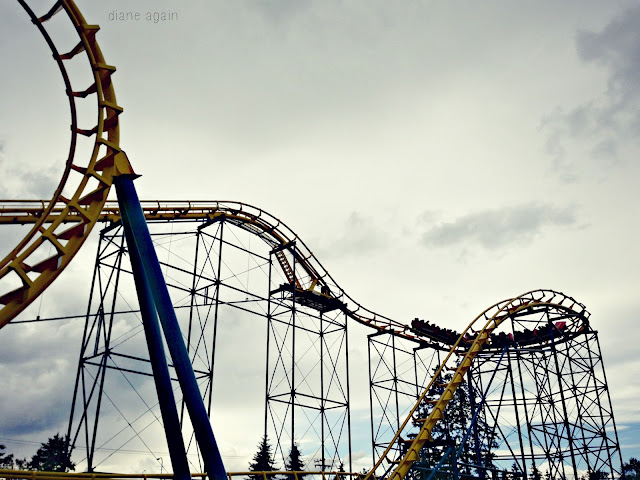 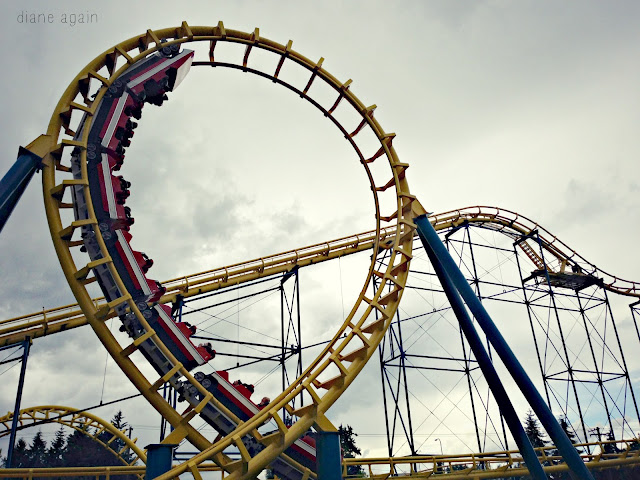 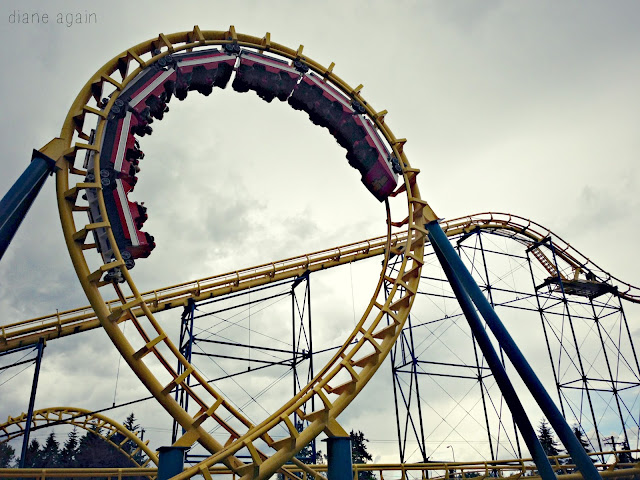 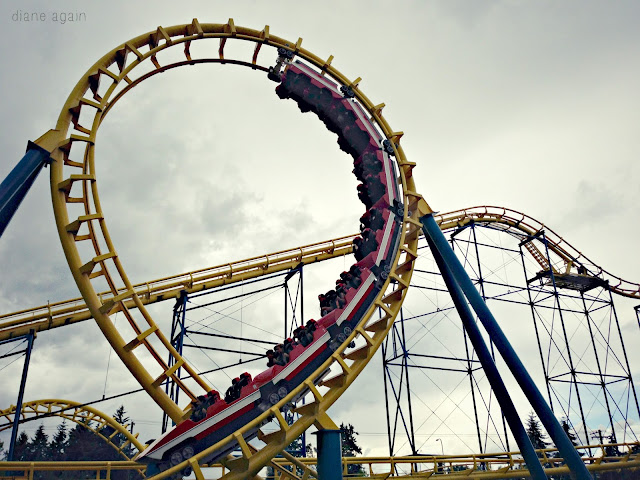 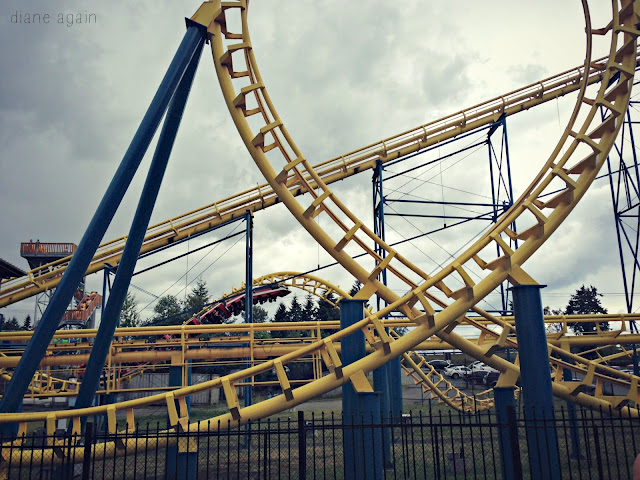 As it turned out, the ride was fine. I really enjoyed the speed of the banked turns and straightaways, and anyway, it was over in just a few seconds.

The storm broke as we were exiting the ride; the rain poured down, and lightning split the sky. For safety's sake, the park immediately closed and we all headed to the parking lot, soaked and satisfied.

Thank goodness I rode The Wild Thing. I made my daughter happy, I faced down my coaster fears, and best of all, I can say that my pledge to Marilyn - to push myself, to refuse to get old and timid, to live my life as a Wild Thing - is largely intact.

Then I drove home on Interstate 5 through heavy traffic and a monsoon-class rainstorm. And that may have been the Wildest Thing I did all day long. 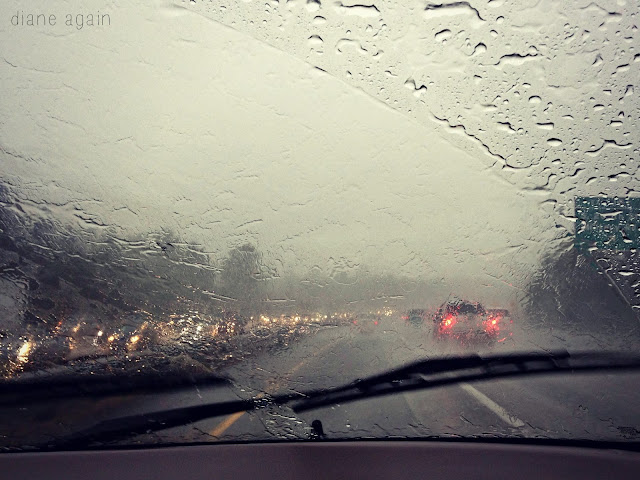 Posted by Diane Streicher @ Diane Again at 2:35 AM