Sticks And Stones May Break My Bones 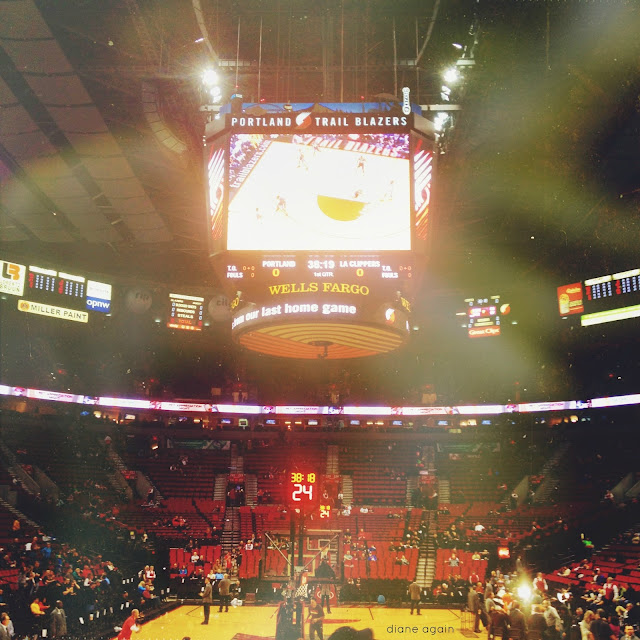 I don't devote much time in my life to keeping up with sports, but I do love to watch sporting events live. My eldest, however, is a major fan girl of the Los Angeles Clippers and since Seattle is currently lacking an NBA franchise, a trip to Portland was a necessity for her to see her team in person.

So she bought me a ticket to the Blazers-Clippers game for my birthday, and yesterday we drove 195 miles each way to take in the game.

That's a loooooooong way to go for a regular season basketball game.

Good thing it was AWESOME. 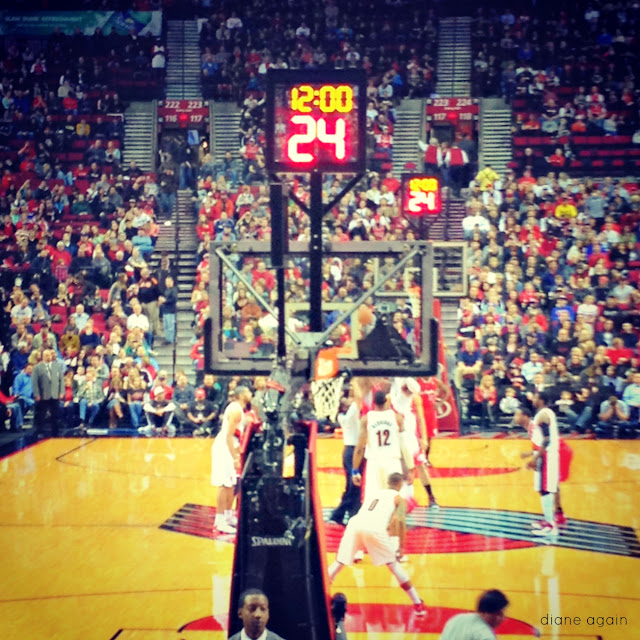 We arrived in plenty of time for the opening tip, and because we were seated directly behind the visiting team's goal, we were each promptly handed a plastic package. Once assembled, I was the proud owner and operator of a pair of these inflatable clappy things.

They probably have a real name but I don't know what it is. 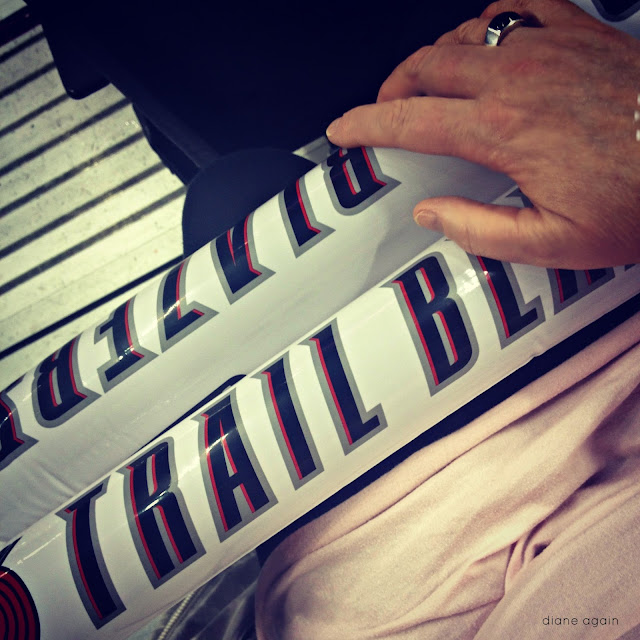 But I knew right away what they were for.

If you don't already know, the purpose of these air-filled sticks is to annoy and distract members of the visiting team when they are shooting free throws.

And they are perfectly suited to that task. The visual effect of all those white wands whipping through the air is dizzying, and the noise they make - a buzzy humming sound - is less annoying than a vuvuzela but still right up there in the "please make it stop" category. 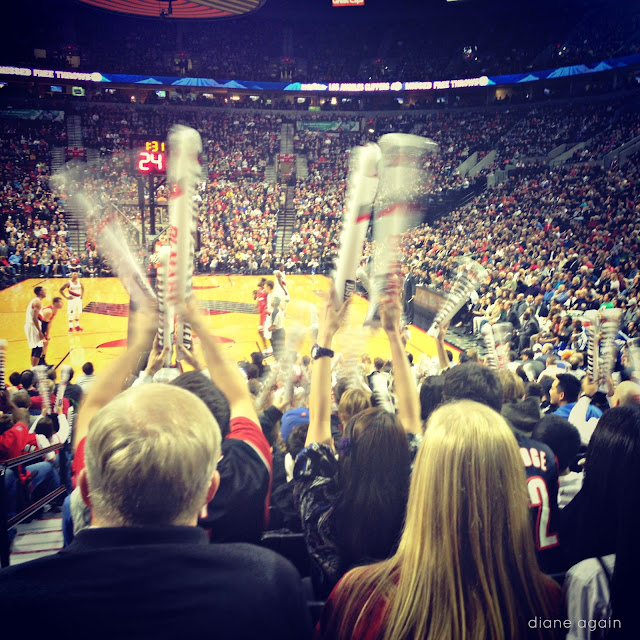 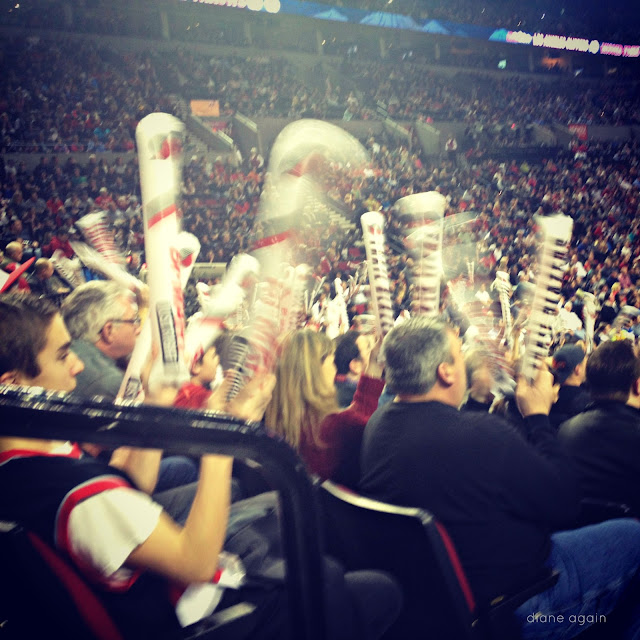 Now here is where it got interesting for me. I'm all for going with the flow and following the hometown vibe, but due to family loyalties, I was rooting for the visitors. Was I really going to put forth an effort to distract my team's players from scoring?

So when a Clipper stepped up to the line for a few free throws, and everyone around me was clapping their clappy thingys and howling to beat the band, I sat quietly in my seat with my clappers on my lap.

I'm sure the Clippers noticed and appreciated my respect for their craft.

However, when the Clippers scored, well, I couldn't help myself. I beat those white sticks together like there was no tomorrow.

And every time I did so, the 13-ish-year-old boy sitting behind me would mutter, "Traitor." 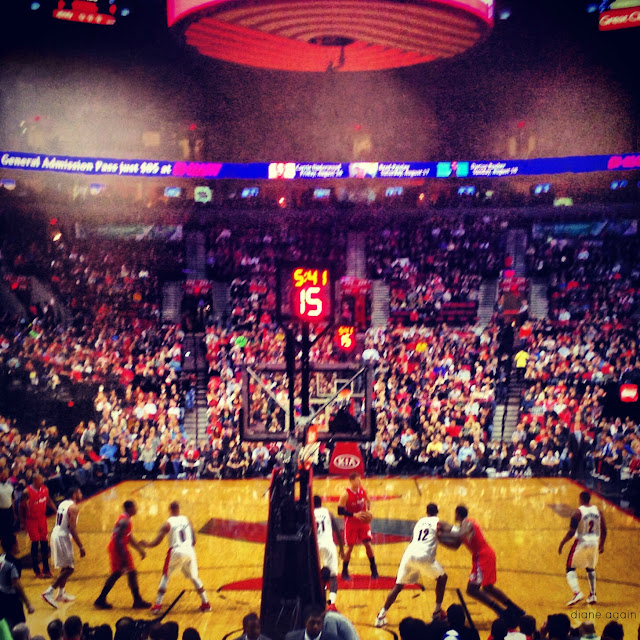 It was a hotly contested and incredibly exciting game. The Blazers stayed ahead for most of the game, but in the fourth quarter, the Clippers mounted a big comeback, and went ahead with a sizable lead.

Which the Blazers slowly cut away until they had regained the lead by just one point, with less than a minute to go.

Then the Clippers had the ball for what would surely be the last shot of the game. One simple goal was all they needed to win. A tried-and-true player got the ball, lined up his shot, and let her fly.

Alas, there was no joy in Portland for us Clipper fans, but the hometown Blazer lovers went mad with delight. Silver, red and white streamers poured from the rafters, the pounding music set the whole joint jumping, and everyone basically went berserk. 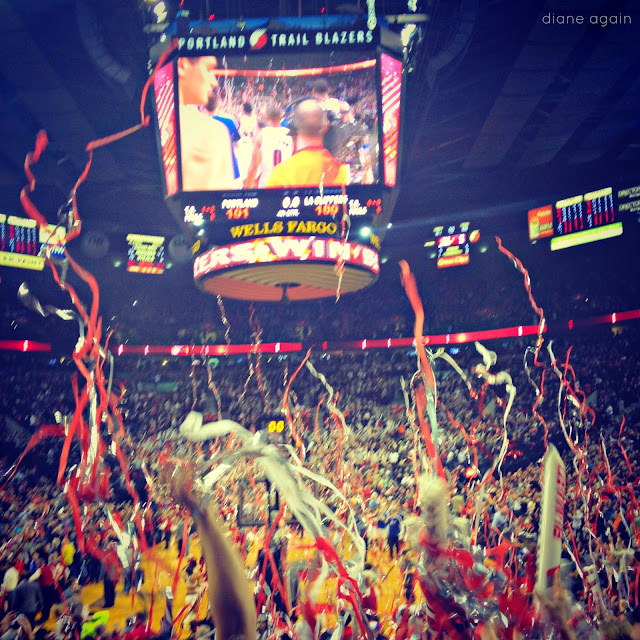 And although this was not the way I wanted the evening to end, I'll admit that I enjoyed the heart-attack finish to the fantastic game, and the wild celebration that ensued. I had a pretty darn good time.

Even if I am a traitor.

P.S. Here. I'll provide the highlights reel. But you'll have to find your own clappy thingys.

Gomo Kelate Gomo!
GKG Glory
Take Me Out To The Ball Game
Take Me Out To The Crowd
Buy Me Some Peanuts And Cracker Jack
My Outing With Pjoe And Amy
As American As Apple Pie
#yolo
Hello At Last
My Twelfth Men
Tonight Is The Night
Face-Off
Posted by Diane Streicher @ Diane Again at 11:19 PM