I've had three dogs in my life and the first two were born on April 8. No, they were not litter mates or related in any way; it just so happened that they were both born, many years apart, on that same date.

In honor of their shared birthday yesterday, I dug out some photographs and some memories to share.


Kelly was my childhood dog. We got him when I was eleven, and honestly, I was a wee bit afraid of dogs (I was scarred by a horrifying encounter one winter's day with an aggressive black lab named Baron who chased four-year-old me out onto the middle of our frozen lake all by myself. I cried.) Luckily, there was no way anyone could be afraid of this tiny lad - he was a sweet little bundle of red-haired happiness.

We struggled for several weeks to decide on a suitable name for our pup. My brothers and I came up with a lot of possibilities but it was my youngest brother, Mike, the little blond guy in the first pic, who stumbled on to the perfect name.

He had just completed his kindergarten year at school, and he might not admit it now, but he had a total crush on his teacher. Her name was Mrs. Kell and as we all made up little temporary names for our poor nameless pet, Mike often called the dog, "Mr. Kell." From there, my mom made the clever leap to Kelly, and we all loved it. Adding to that our street name of Hillpoint, and a nice throwback to his motherland, our baby earned his full name of Hillpoint Shamrock Kelly.

Kelly was a lucky dog. We lived in a lake community, with dirt roads, lots of summer cottages and a laid-back attitude. In that day, dogs were still welcome to roam free without leashes or limits, and Kelly took full advantage of that lifestyle. My brothers and I spent most of our time outdoors - swimming, biking, boating, playing in the woods, sledding, ice skating, and generally fooling around - and Kelly always tagged along with us and joined in the fun.


I remember many a time when I would try to sneak off by myself in our rowboat with a little ten-horse outboard, but Kelly loved boat rides and he did not give up without a fight. First, he would run along the shore of the lake, following my progress, barking madly to show me that he knew perfectly well what I was doing. If I didn't turn the boat to shore and let him board, Kelly would notch up his strategy by jumping into the water and swimming after me, still barking at the top of his lungs.

Ore Lake is a pretty big lake - more or less a circle shape, almost a mile in diameter. Sounds carry very well over that much water, and I'm sure that most of my neighbors were going deaf over the ruckus my dog was raising. Plus, between the incessant barking and the frantic swimming, he would begin to choke and sputter, making a very dramatic scene. Ten times out of ten, I would cut the motor, let him catch up to me, then haul his trembling, dripping, yet very satisfied self out of the water and up into the boat.

And then he would assume the position that he loved. As I clambered to the stern of the boat to man the outboard and get us moving again, he would scramble up to the bow, put his front paws up on the top edge of the very front tip of the boat, point his face into the wind and bark his head off. He couldn't have been any happier. As the sun glinted off his beautiful shining red coat, and I got used to having a living fog horn attached to my boat, I couldn't help but share his high spirits.

We would go down to Little Ore, a smaller and much shallower lake adjacent to mine, switch over to the oars and paddle around, hunting for turtles and frogs on the lily pads.

At least once, in his enthusiasm to see the creatures, Kelly jumped out of the boat, swam around in dismay as he realized the animals had disappeared, and then paddled back over to the side of the boat where I could help him haul his soaking wet, eighty-pound self back in. Along with what seemed like gallons of lake water, he dragged in strands of seaweed and plenty of muck. Oh, those were some good times.

Here are a few more pics of Kelly and Mike, taken in our front yard when Kelly was about five years old. Mike has a box of Milk-Bone dog biscuits, and I believe that after feeding him a few of them, Mike tries to psych him out and pretend they were all gone. But Kelly is too smart to be fooled by that old gambit, and in the end, Mike relents by giving Kelly a handful to eat at his leisure, and goes off to leave the victor to his spoils. 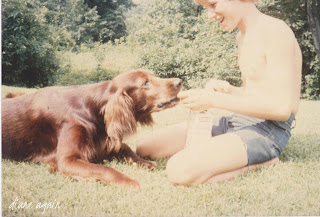 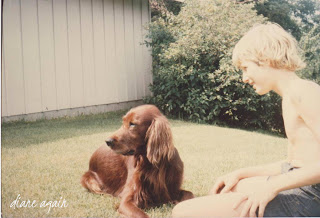 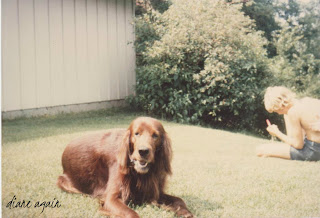 There are a billion more stories I could tell about my good dog, Kelly. My mom always called him the "dog of dogs," and while I have loved my other dogs just as much, there is no denying that Kelly was one of a kind. Bless his soul.

Ready for more stories about Michigan, my mitten-shaped home state?

I Still Have Stress Dreams About Writing Papers But This Part Of College Life Was Lovely
Four Important Things About My Mother Bear
Fruits Of The Spirit: Kindness
A Lake Feels Like Home
Vintage Memories
Sky Scenes
De-Planing In Detroit
There Is Always Something To Miss
Especially In Michigan
Down In DEE-Troit
The Story Of The Stair Steps
Polar Vortex 2014
Hello, Hydrangeas