Three Landmarks And A Pass On The Oregon Trail

In June of 2017, my husband and I flew to Ohio, loaded up a U-Haul van full of
family treasures, and drove it 2500 miles back across the country.
These are our adventures along the way.

As we rolled ever west, we followed U.S. Highway 20 across the border into Wyoming.

Through Guernsey where we spent the night.
Through Casper where we picked up Highway 220.

And thus we met up with the iconic Oregon Trail and followed that route up into the mountains to the Continental Divide.

The trail as it once was - a rut of worn soil and rock, ranging in width from a passage as narrow as a wagon to almost a mile wide - weaves back and forth across today's two-lane highway as both work their way toward the defining barrier between east and west, South Pass.

For the modern traveler, finding the route is as easy as reading the signs along the way, or clicking around on our phones. In desperate times, we can always rely on an old-school paper map.

But imagine you are a weary traveler in the 1840s or 1850s, walking your way across the wilderness. You're about to face the defining ridge on the continent - the place where waters part to run either to the east or the west - and you would certainly like to face that arduous challenge at the most accessible spot. South Pass, they say, is the easiest place to cross and so to find it, you must rely on three key landmarks:

This big ol' mound of granite lies smack dab along the Oregon Trail, just off the Sweetwater River, and serves a welcome sight for you and the travelers of that day. Those who reach the rock by Independence Day - July 4 - consider themselves on pace with the journey, and as you roll in to its shadow, you take this as a harbinger that you will be out of the mountains before the first snows fall in autumn.

So like other emigrants before you, when you arrive here, after seeing the rock from afar for many miles. you celebrate. Many before you have carved their names in the rock, and like many more you take advantage of the rock's gentle slope and firm footholds to scramble up and take in the views 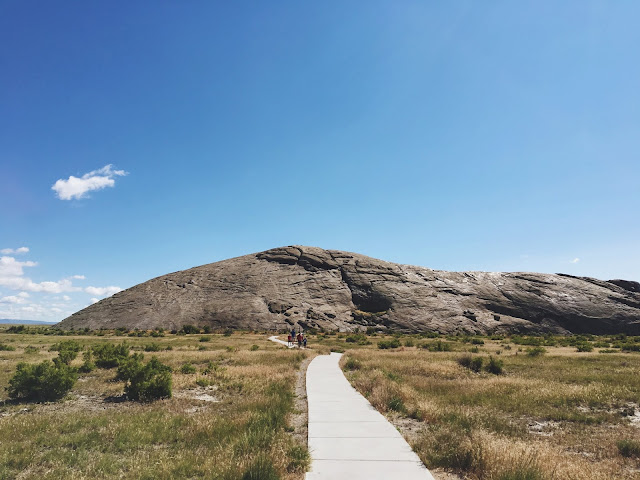 ^ Today, Independence Rock is just as easy to find and explore. Broad walkways lead in from the parking lot, and warning signs for rattlesnakes remind me of just how accustomed we are to having dangers mapped out ahead of us. 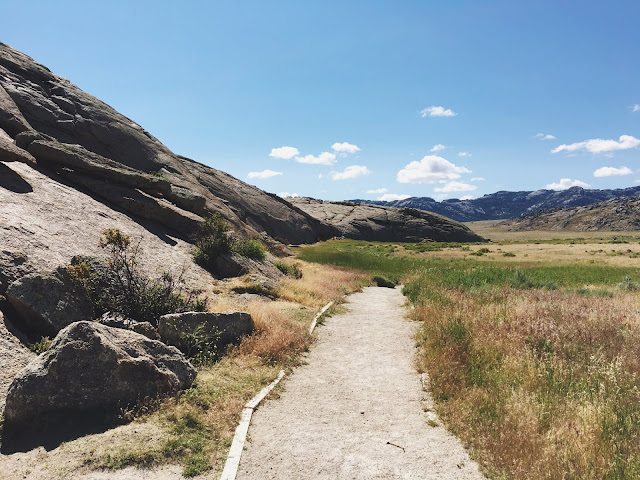 ^ The walkways continue around the base of the granite behemoth, and we followed them, appreciating its considerable girth and height. 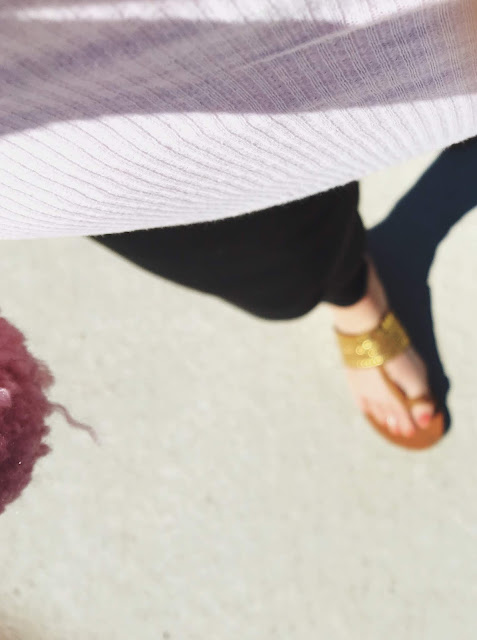 ^ An unintended shot captures my outfit of the day, sandals of the summer, and the pink pom-poms on my favorite summer purse. I love a happy accident. 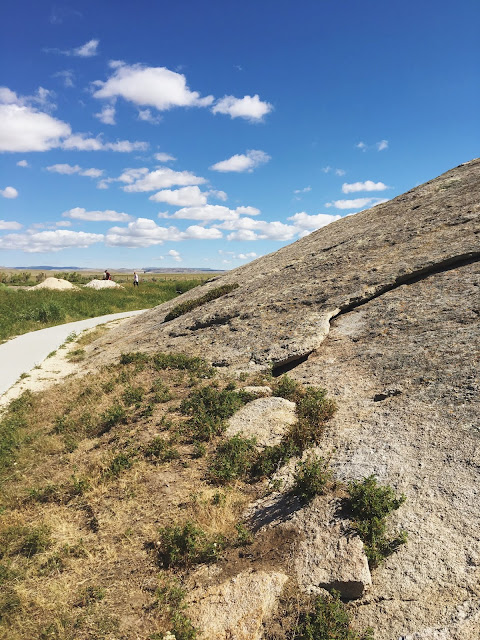 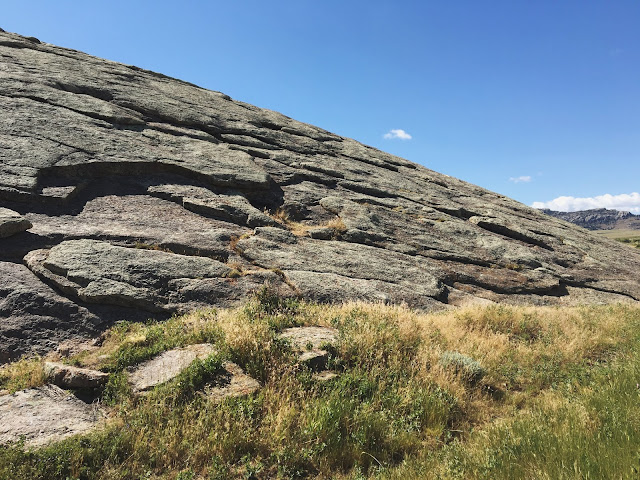 ^ It's easy to appreciate how the emigrants were tempted to scale the mighty monolith. I watched a dad with three young boys test their mettle against the rock and was delighted to see how they scrambled up like a herd of nimble goats. 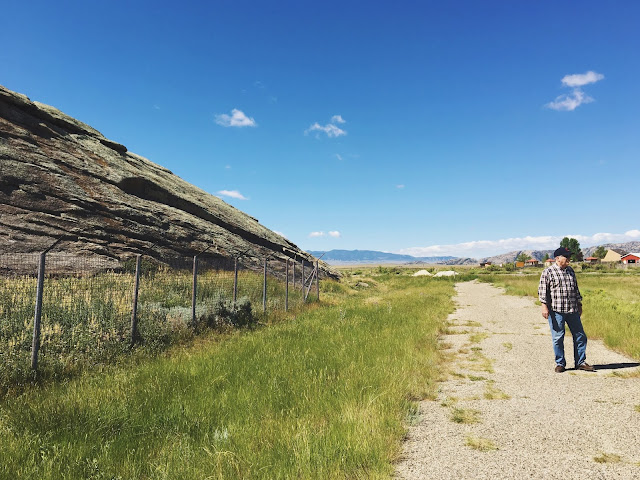 ^ In some places, visitors today are allowed to climb but fences protect areas of the rock where old signatures still remain. Fences or not, my husband does not look particularly interested in a vertical adventure, and so we move along.

Following the Sweetwater upstream, your eyes strain for the second key landmark along the Oregon Trail. Just five miles up ahead,  Devil's Gate is a natural rock formation, a gorge along the Sweetwater where the currents have worn a distinctive slot in the surrounding granite ridge. Although the trail does not pass directly through Devil's Gate - which would have been a wet, wild ride - you take confidence that you are still on course to South Pass. 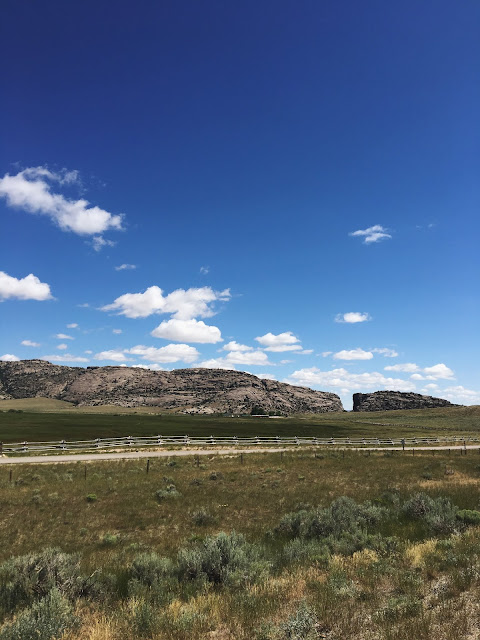 ^ We made several stops along the quiet highway to find just the right angle for capturing the steep sides of Devil's Gate. The countryside was quiet and lush, the gap was an arresting sight in the wilderness, and other than the fence in the foreground, this scene must look just as it did when the emigrants spied it almost two hundred years ago. ^ As I framed my photos of Devil's gate by looking to the right, I then glanced toward my left and saw this marker: Oregon California Trails. This dry, desiccated patch of ground lay under the wagon wheels and weary feet of the 19th century travelers. I imagined their joy as they realize their climb to the rooftop of the continent is almost done, and I hopped in the car to follow on.

With Independence Rock and Devil's Gate in your dust, you spy one last landmark that lights the way to South Pass. Split Rock is a mountain with a deep V-shaped cleft in its peak, visible for miles around. You gaze at the Sweetwater River that runs along the trail as both sweep around the mountain's base, and you take one last deep breath as you prepare to climb to South Pass 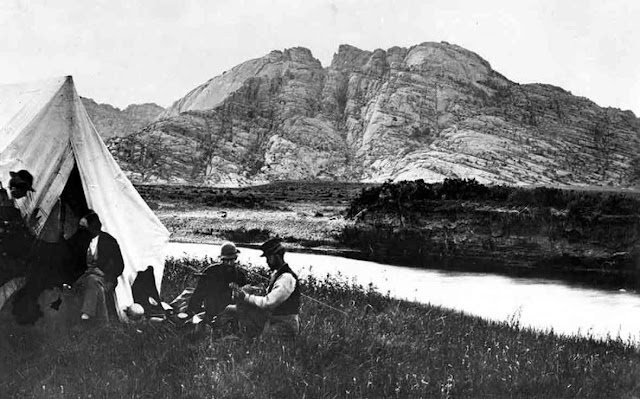 ^ I didn't get a chance to capture Split Rock, but here's a shot of pioneer photographer Henry William Jackson camping on the banks of the Sweetwater at the base of the mountain with members of a survey team in 1870.

You've been preparing for this summit, the most extraordinary mountain crossing you will make on the Trail, since the day you set off. The three landmarks have shown you the way, and now you follow surprisingly gentle green meadows up toward the sky. Sure, the hike is strenuous but compared to the snow-covered rocky peaks around you, this scenery is absolutely tame. 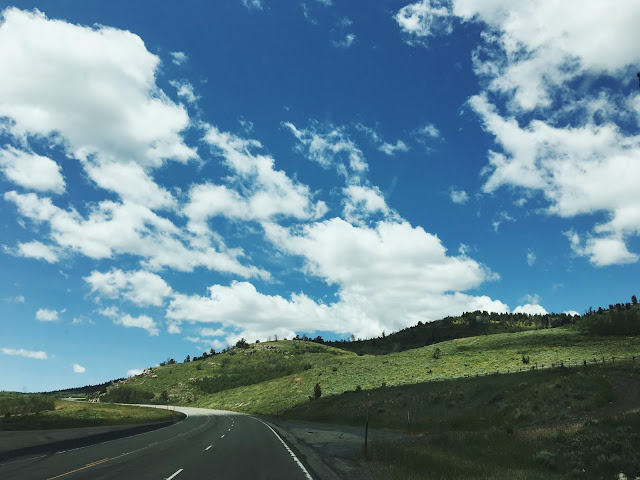 ^ I've traveled through South Pass quite a few times and yet, every time I'm struck again at the incredible cleverness of the scouts who found this pastoral route. It reminds me of the scene at the beginning of The Sound Of Music where Fraulein Maria is twirling in a flower-strewn meadow in the mountains. This looks like a place for a picnic, not a rigorous mountain crossing. 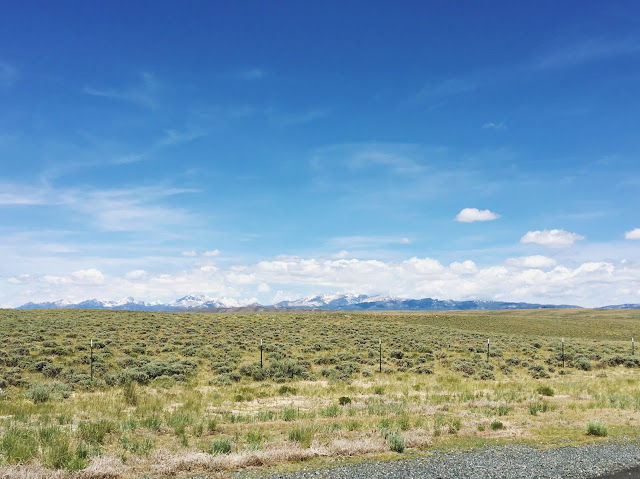 ^ But this is it. The continental divide that the emigrants found by following the landmarks across the miles. I thought of them as I stopped here for a picnic, and hope that they enjoyed their time here too. I hope they felt a special joy and a huge relief as they met this major milestone on their journey across the continent. 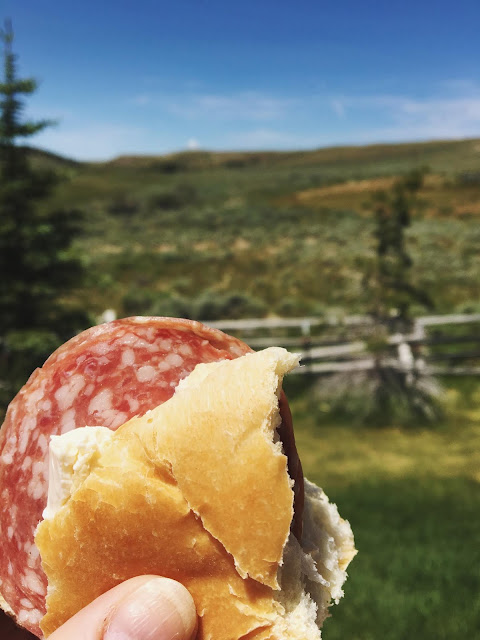 So I raise my salami and cheese sandwich to you, Oregon Trail travelers, and celebrate your amazing accomplishments.

Here are all of our adventures from this summer road trip across America:

Off Again
A Journey Through The Sky In Three Stages
Cute Cat Photos
Smiling Faces
An Afternoon In Iowa In Three Stages
A Letter To The Children At The Pool
Say Hello To The Byway
Three Landmarks And A Pass On The Oregon Trail
Road Trip Realities
Posted by Diane Streicher @ Diane Again at 2:41 AM

Email ThisBlogThis!Share to TwitterShare to FacebookShare to Pinterest
Labels: Cooking and Eating, Interesting People, Travels Near and Far