It's a simple fact of life that my father brought very few rays of sunshine into my life, but I will give him credit for introducing me to the joys of hockey.

When I was a toddler, he built a skating rink in our Michigan backyard, strapped me into some double bladed baby skates (actually, I expect my mom was the one who dressed me), and set me to pushing a chair around the ice. That's how I learned how to skate.

And when I grew big enough, he laced me into a pair of child-sized hockey skates (again, my mom).led me down the hill to a shoveled patch of ice on the frozen lake, and put a hockey stick in my hand.

I was the only little girl in the neighborhood who wore hockey skates and that was a little weird but I secretly enjoyed it.

I also enjoyed Saturday nights. During the winter months, my dad would turn on the TV with great ceremony and announce, "It's time for Hockey Night in Canada." And for the next few hours, men in padded costumes would glide around the ice, swinging their sticks with great enthusiasm, causing the tiny black puck to ricochet around the rink so quickly that my eyes could never keep up. This too was endlessly fascinating to me

By the time I was eleven, my hockey skates had been replaced with figure skates and my dad was gone, but Hockey Night in Canada has remained.

Here in Seattle, we don't have a National Hockey League franchise. Never have, but soon we will. The new team will begin to play in the 2021/2022 season and I'm excited for that new day to come.

But in the meantime, in order to catch an NHL game, I need to travel to an NHL city. And the closest one to my house, clocking in at 125 miles, is Vancouver, British Columbia.

Recently, my first-born, who is an avid fan of the Colorado Avalanche, and I made that trip up to our northern neighbor to catch a game when the Avs were in town.

Yes. We went to see hockey. At night. In Canada.

Although it's entirely possible to go up for a game and back in a single day, my daughter and I decided to treat ourselves to an overnight stay in Vancouver. She booked us into a hotel half a block from Rogers Arena, and Yelped us a meal plan that was full of delicious surprises. So when we pulled into town around mid-afternoon, we checked into the hotel, and then turned right back around to find us some food. 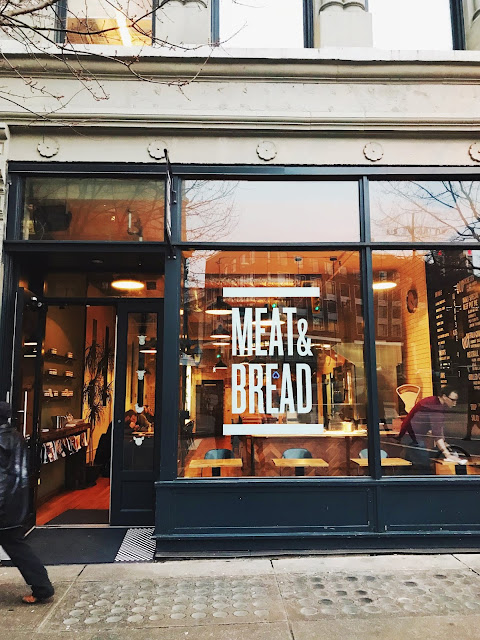 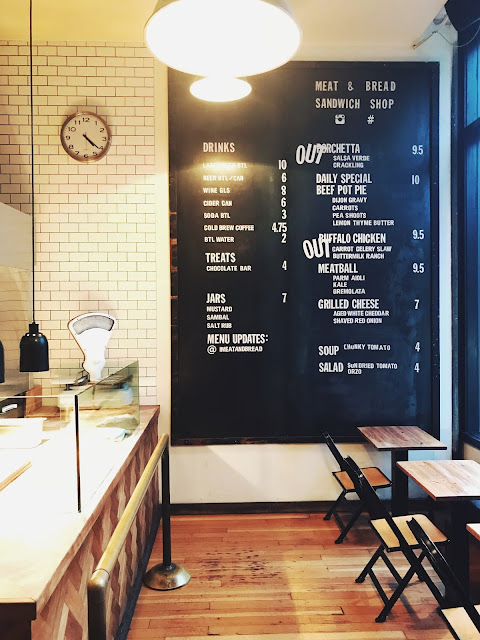 ^Meat & Bread had all the accouterments of a proper postmodern eatery: salvaged wood, subway tiles, minimalistic wall art, and a tightly edited menu.

We were hoping to try the highly recommended porchetta sandwiches but they were already sold out for the day. So we settled for the meatball subs instead. 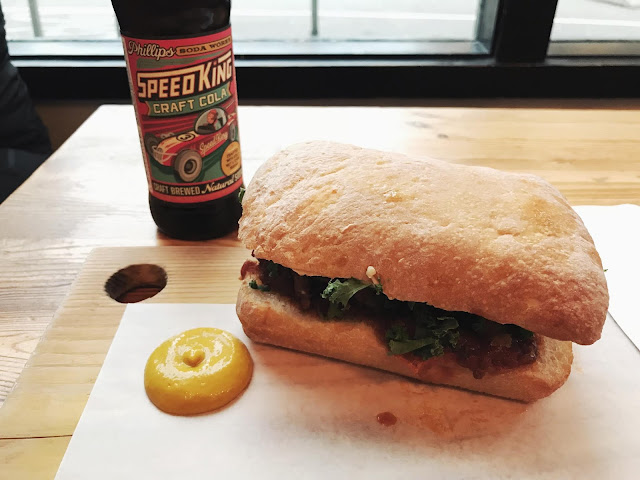 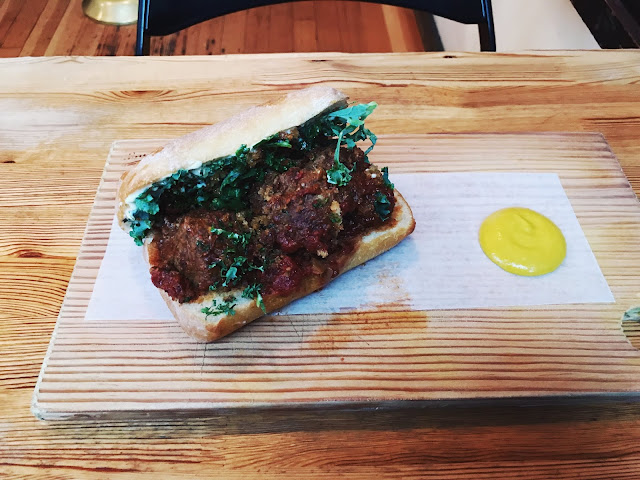 ^ They were, in a word, delicious. Packed with plenty of greens and accompanied by a puddle of spicy mustard, the sandwich was powered by punchy flavors. Both my daughter and I struggled to maintain our composure while eating - chunks of meat dropped onto the table, the bread crumbled, and of course that mustard dribbled all over our hands. We each used a dozen napkins and pronounced the masterpiece a deliciously messy plate of good food.

As we were eating, two other customers came into the restaurant, each a party of one, sat at tables to our immediate right and left, and began to eat their own meatball sandwiches. To my daughter's and my astonishment and surprise, each of them munched down every delicious bite without spilling so much as a crumb, and when they had finished, used exactly one napkin apiece to gently dab at the corners of their unsoiled mouths. We never did figure out how they managed to eat so neatly, but we were mightily impressed. 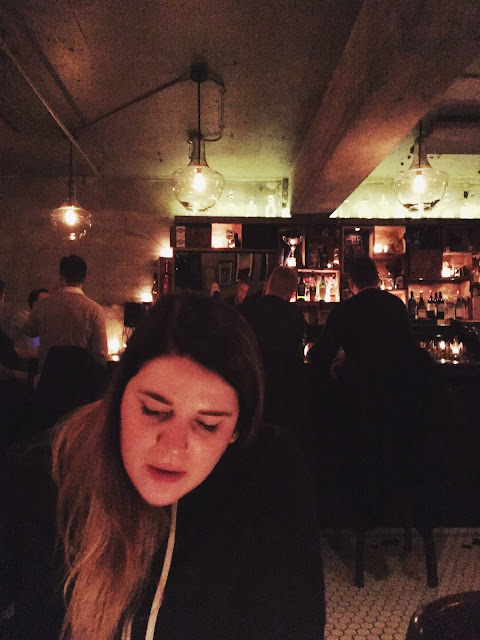 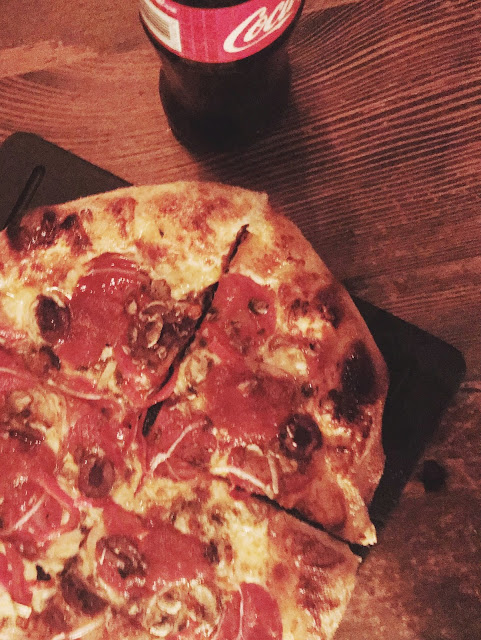 ^ For dinner, we tried a pizza place called The Parlour. Rustic handmade personal size pizzas and icy Cokes were the perfect post-hockey refreshment, and the restaurant's dark and memento-filled ambiance was cozy and warm. 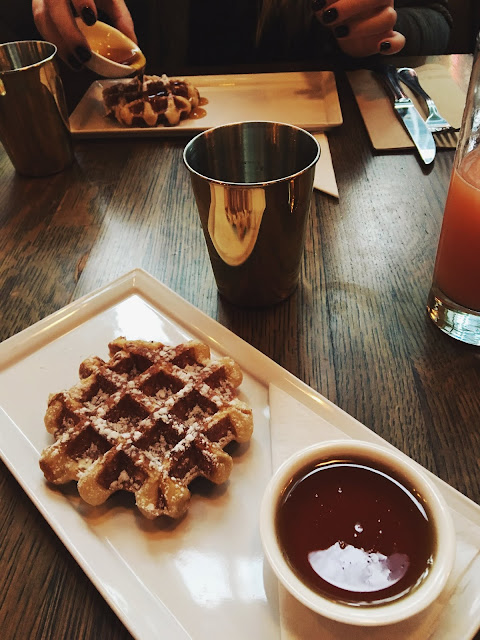 ^ And the next morning, on our way out of town, we grabbed breakfast at Café Medina. I'm not much of a breakfast food person, but word on the street was that they served the best waffles in town, so I decided to give the waffles a try. Light and airy, drenched in proper Canadian maple syrup. They did not disappoint even a waffle cynic like me.

But now let's get to the meat of our visit. Vancouver Canucks versus the Colorado Avalanche. A fun game, with an overtime win for the Canucks that left us Avs fans deflated but the hometown crowd buoyant, which made for good vibes as the crowds spilled out into the streets after the game.

But win or lose, my favorite moment in the game came early. 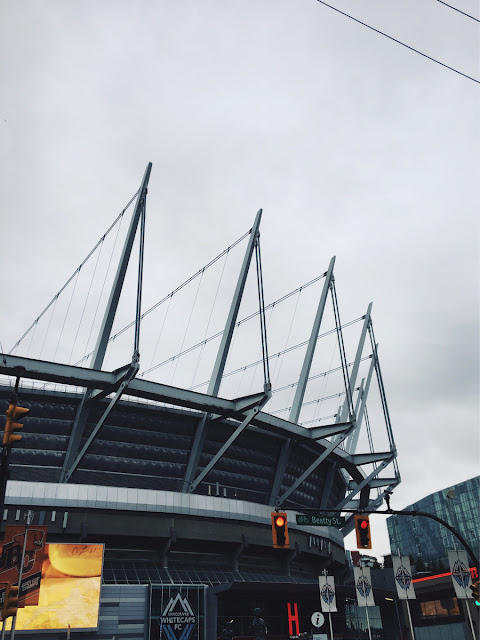 ^ We planned to arrive early. Before dark, we left our hotel, joined the throngs of people already flowing into the arena, and found our seats. 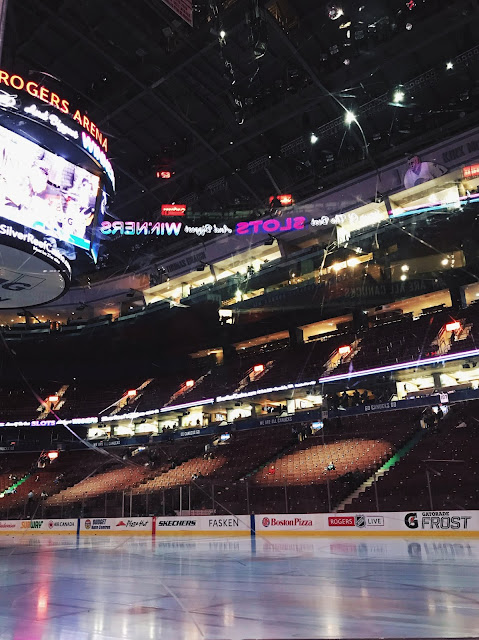 ^ Thus properly oriented, we made our way down to the ice and stood at the glass to watch the Avs warm up. Around and around the players moved through their pre-game drills, taking shots on goal, then forming up lines behind the net and passing in front of us as they made their way back up to center ice, their faces just a few feet away from ours.

As we watched, I became aware of a twelve-ish-year-old-boy standing next to us along the glass.

Well. Everyone within a hundred feet of us was aware of this kid because he had the kind of loud, overbearing manner that is the particular specialty of boys that age. As each member of the Avs passed by us in formation, this little darling would pound on the glass with his open hands and shout at the top of his lungs in hopes, I suppose, of getting a player to react.

But the players did not react. Professionals that they are, the Avs continued to loop around, focused on their warm-ups and the game ahead. They paid no attention to my obnoxious young neighbor. 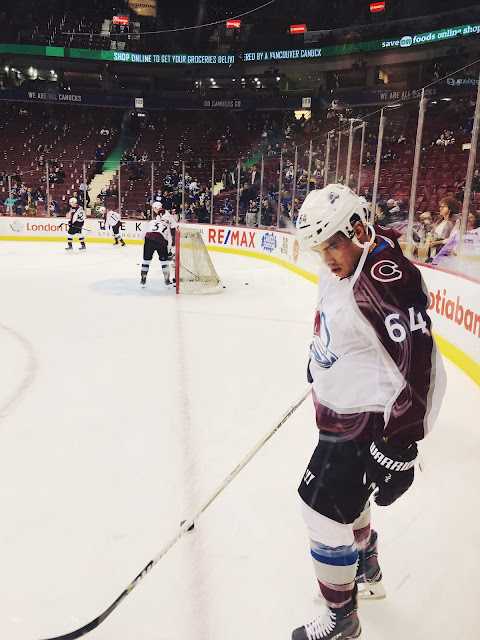 ^ Skating slowly around the corner, in line with his teammates came Nial Yakupov. Number 64. He had already passed by the little attention-seeker any number of times during the course of the warm-ups.

But this time,
without warning,
right before my eyes,

he suddenly broke formation, veered over to the glass where this young fan was pounding and yelling. In a split second, Yakupov formed a massive, glove-covered fist and punched the glass as hard as he could right in front of the boy's face.

As only an overgrown boy himself would do.

And in the next split second, as the boy stared in stunned silence, Yakupov grinned an enormous smile at him and skated off to re-take his place in line. 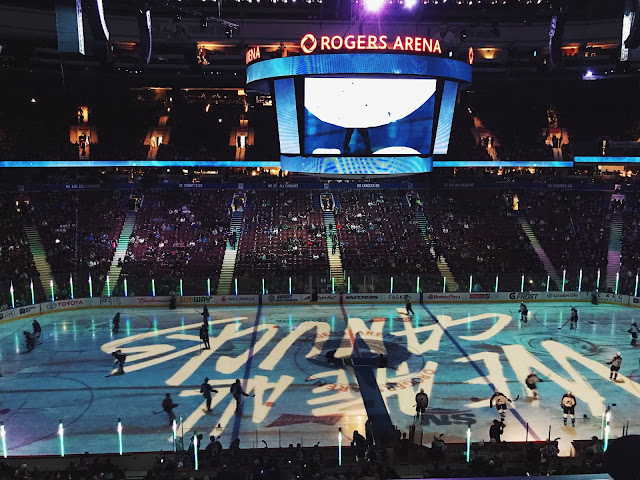 The boy turned and ran off to find his parents. I can only assume he wanted to tell them what had just happened.

I certainly hope so. I'll be telling this story for the rest of my life, and I hope the boy will too. Maybe someday he will grow up, become a hockey player, and punch the glass in front of some other crazy little boy's face.

There's just no telling what might happen on a Hockey Night in Canada.


Stories about my less-than-perfect dad:

Father's Day Musings About A Bad Dad
My Mother And Me
Spinning Gold Out Of Straw
Fresh Air
Hockey Night In Canada
Posted by Diane Streicher @ Diane Again at 2:14 AM

Email ThisBlogThis!Share to TwitterShare to FacebookShare to Pinterest
Labels: Art and Architecture, Cooking and Eating, Travels Near and Far