Vast And Beautiful Mysteries Of Life

Just moments ago, Ranger and I stomped in the front door on return from our daily walk, and we have quite an adventure to share.

We were late getting started today. I was out running errands until after five, so Ranger was more than ready to go when I returned. I dropped my groceries on the counter, changed my shoes, and off we went. 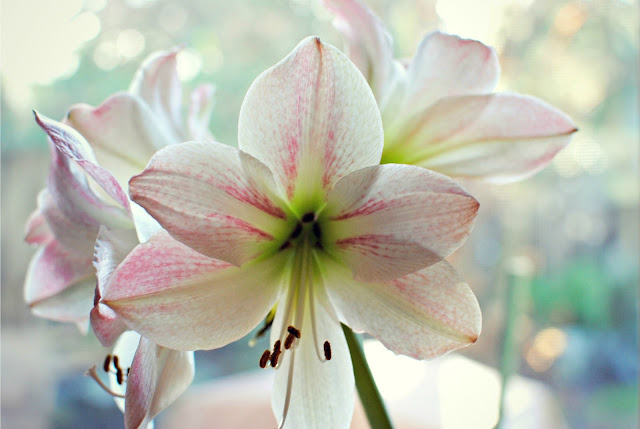 In other nature news from my house today, my amaryllis burst forth in bloom.


It's only fair to say that Ranger waited patiently for me. My fourth-born, who was napping on the couch with our boy while I was gone, did mention that at one point in the afternoon, Ranger got up, looked at her, and offered a lukewarm whine. She hushed him and he obediently lay back down. Then she checked the time. 4:31 p.m. Not bad.

Darkness was settling in as we crossed the foot bridge through the ravine behind the school and came upon my secret place. 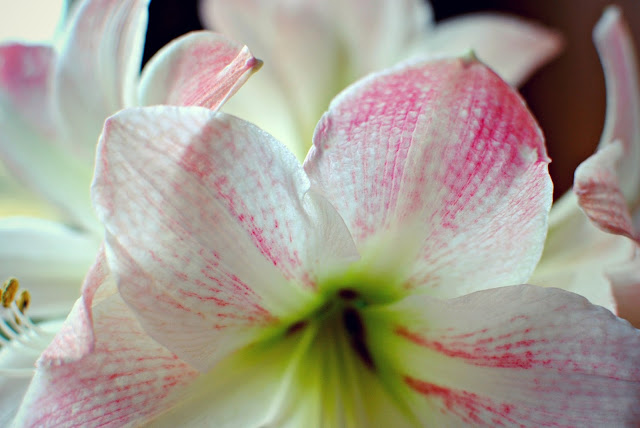 Well, yes. My original plan was for this phenomenon to take place in time for Christmas. So like a month ago. But really. who's counting.


Okay, so it's really not that secret. The foot bridge leads to an administrative outpost for the adjacent high school. Tucked into the woods, this rectangular, out-of-sight office building is surrounded by a paved lane that wraps around three sides - short, long short, and then leads back out to the main school campus. By late Friday afternoon, this secluded area is always deserted and quiet.

Today, Ranger and I hopped off the foot bridge, same as always, and began our journey around the back of the building.

As usual, Ranger was working the full extent of his fifty-foot lead, wandering back and forth across the lane, sniffing the landscaping around the secret building on our left, or the wild perimeter of the woods to our right.

I suddenly noticed two unfamiliar women up ahead, standing in the lane on the long side of the building, about ten paces ahead of us. They turned round to face us and spoke in greatly exaggerated but utterly undiscernable whispers.

I had no idea what they were trying to say.

Instinctively, I began to coil Ranger's rope, slowly increasing my control over him in an uncertain situation, and he hunted obliviously on.

As I moved a few steps closer, the women repeated their message and with a burst of adrenaline, I understood.

"There's an owl up here in the lawn." 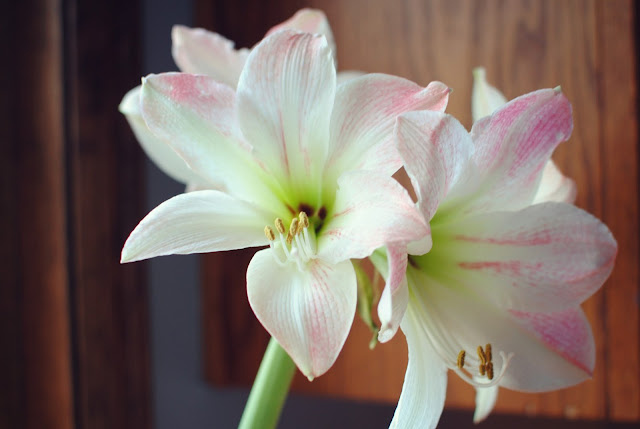 In my book, there is no bad time for nature to burst forth in glory and knock my beauty-seeking socks off. This profound mystery took place before my very eyes today, and I'm grateful indeed.


For years, in the wee-est hours of the night, I've listened with my heart beating out of my chest to the majestic calls of an unseen owl in my back woods. But never have I seen one of these noble predators. And knowing how elusive these nocturnal hunters can be, it never even occurred to me to dream of seeing one.

The long, back length of the secret building is not lit, which was good news for the owl but bad news for us, as we strained our eyes to make him out. But one of my new companions noticed a movement.

"Oh, he just flew up into that tree!"

Turning this way and that, we strained to see the bird's silhouette as he perched in the branches of the fifteen-foot tree planted right up against the building, but I still couldn't make him out.

We quietly stepped along the dark lane, hoping to find an angle that would allow us to catch sight of him.

I think what I noticed first was the quiet shudder of the tree as the feathered beast pushed off against it.

What I saw sent chills over every inch of my body.

An enormous, ghostly white specter passed almost directly over our heads.
An utterly silent flap, flap of powerful wings swiftly propelled the bird over the lane and into the waiting woods.
And, expertly maneuvering its wings just so, the owl landed with speedy but soundless perfection on a tall tree branch, just beyond our line of sight.

My impromptu companions and I gasped with delight.
We stood for a long moment, reminding each other of what we had just seen, as if none of us could believe it herself.
Then we parted company, strangers no more.

Ranger, for his part, had not noticed a thing. And the owl had not seemed to care one bit about him.

We finished our walk, Ranger happily sniffing as usual, and me contemplating the vast and beautiful mysteries of life.


For more stories about my owl, read these:

Burung Hantu
The Third Time
This Powerful Gift
Posted by Diane Streicher @ Diane Again at 2:30 AM