Today is a red letter day in the history of Seattle sports. The historically beleaguered Seahawks are having a banner year - arguably the best of their franchise history - and it seems like everyone in the city has turned out to cheer them on.

Well, I'm fine with that. Fair weather fans are a thing and I say the more, the merrier. And the team's followers pride themselves on a loyal and outspoken fan base. They call themselves "the twelfth man" referencing the fact that an (American) football team puts eleven men on the field at a time, but the hometown fans' roaring presence is so intimidating as to create an advantage as significant as an extra man on the field.

But I want to be honest. I hope for a win today, but not for my own satisfaction. Psh, I can't even call myself a fair weather fan - I just don't really care that much. But I want this victory for the true Seahawks fans who have stood by their team, year after disappointing year, always rooting them on, optimistically dreaming that maybe next year will be the year.

Those are the people who deserve a win today.

Especially on my mind are the three most diehard Seahawks fans I know: 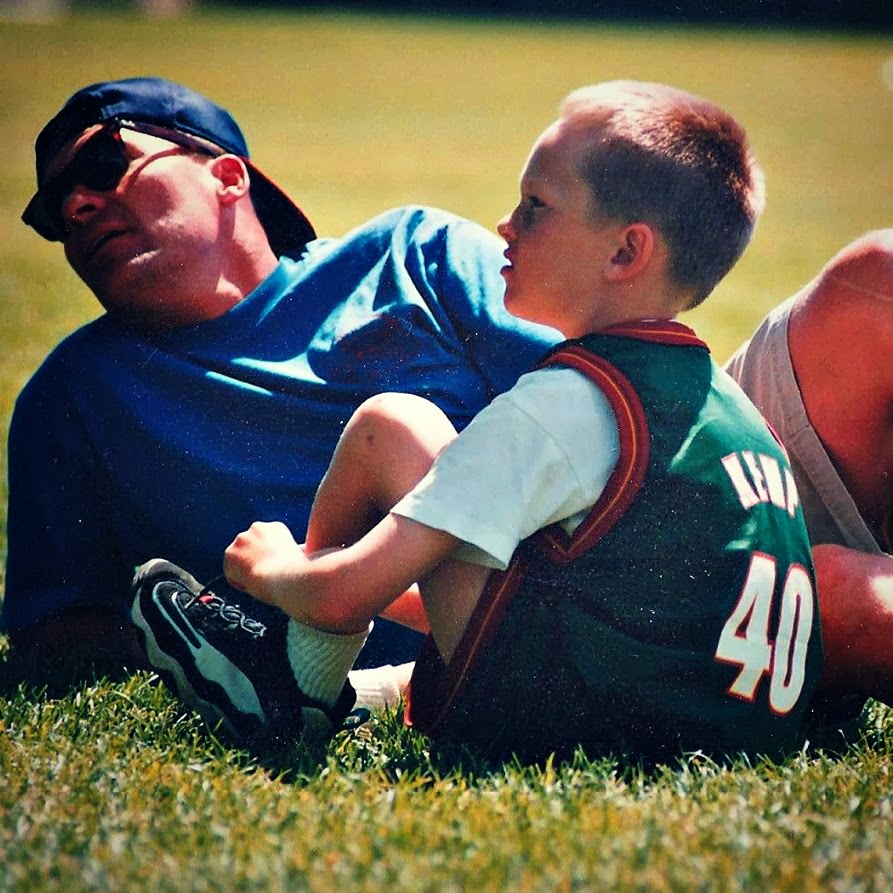 Kevin has loved sports of every flavor since he was a freckle-faced lad, as proven by this shot of him in his Sonics jersey. In the decade or so since this photo was taken, his dedication has wavered not at all. In fact, as a full-grown adult, he's taken his fandom to the edge of crazy as demonstrated by the fact that he's dressing his dog in Hawks gear.

Yes, I think that's weird, Kevin.
But I respect your passion. Go Hawks. 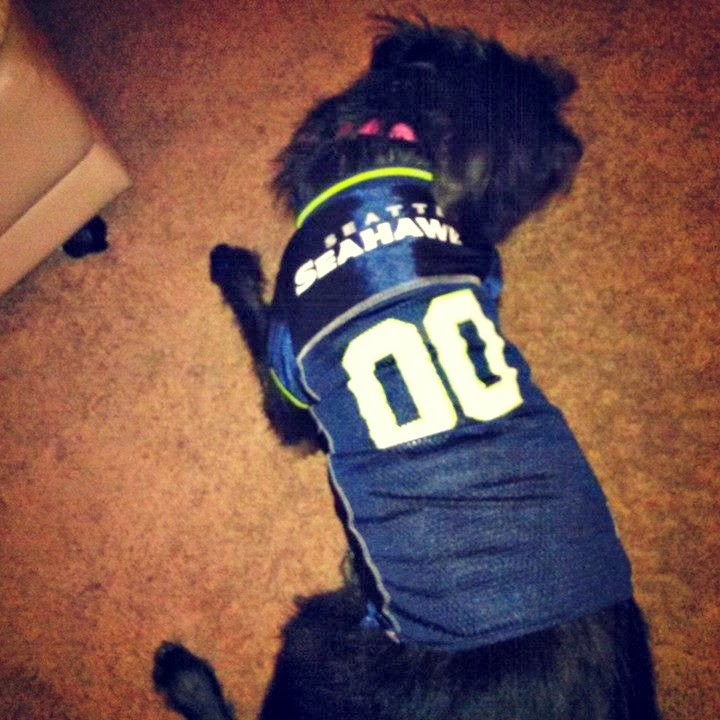 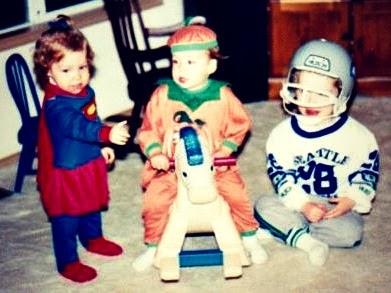 Erik's love for the game also goes back to childhood. Here he is with a sibling and cousin, posing in Halloween garb. Yep, he's the Seahawk. Notice the smile?

The years have come and gone; Erik spent five years on the East Coast for college but could not stay away from Seattle forever. Undoubtedly, his mother would like to think that her delicious home cooking and maternal graces lured her son back home. I'm sure they were part of the equation. But frankly, I suspect he just missed his Hawks. 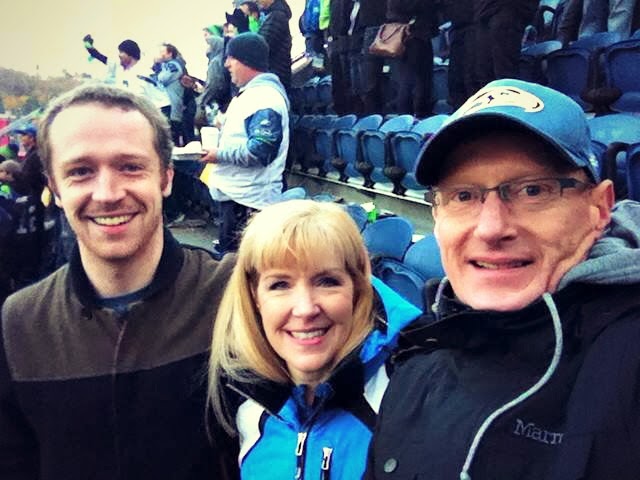 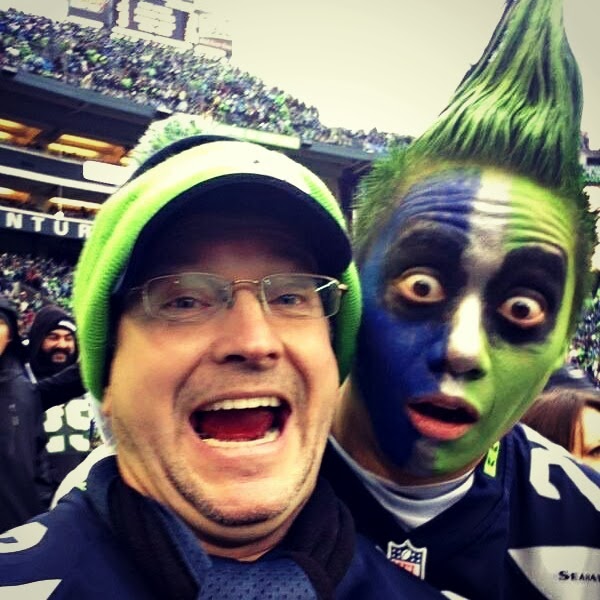 I scoured every inch of this man's Facebook photo albums in search of a picture of his childhood self wearing Seahawks jammies or some such cute little thing, but I came up short. Still, there's no doubt in my mind that such photos exist, because Scott has been a huge Hawks fan all his life. As just one measure of his devotion to the team, he has held seasons tickets for years on end. That may not sound like a big deal, but a quick scan of the team's yearly win/loss stats will paint a sad picture. Nobody knows the trouble he's seen.

I hope this is your year, Conman. I really do. But if not, hey, at least you are enjoying the ride. 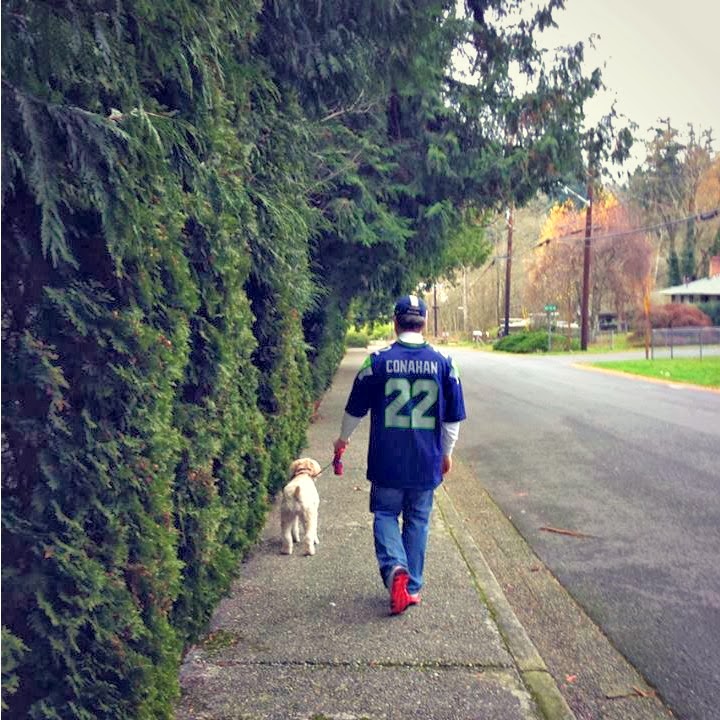 So here's to my three favorite Seahawks fans - if anyone deserves a win today, you do

And even though my heart does not burn with Twelfth Man passion, I'll say this again, just for you.
Go Hawks!

Tonight Is The Night
Two Kinds Of Heroes
Beast Mode

GKG Glory
Take Me Out To The Ball Game
Take Me Out To The Crowd
Buy Me Some Peanuts And Cracker Jack
Sticks And Stones May Break My Bones
My Outing With Pjoe And Amy
As American As Apple Pie
#yolo
Hello At Last
Tonight Is The Night
Face-Off
Posted by Diane Streicher @ Diane Again at 3:31 PM