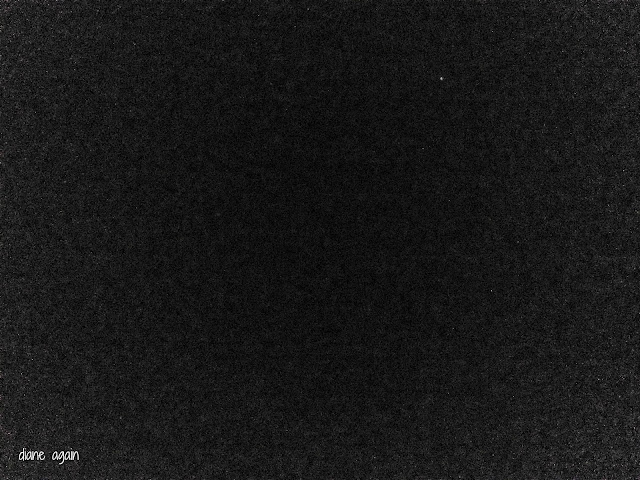 Heh. That's right. It was dark. There might have been a little operator error involved, but my 4S apparently was not up to the challenge of capturing the glory I beheld.

Here are some better shots that I found online to illustrate:

For about an hour, starting at one a.m., my two youngest and I huddled out on our backyard trampoline with about 14 blankets and a sleepy and confused, but always game Ranger. What we saw did not rival a Fourth of July fireworks display, or even a good solid showing of the aurora borealis slash Northern Lights. But we saw at least a dozen bursts of light streak across the sky, some fairly small and faint, but several that made us ooh and ahhhhh.

{Quick science moment: the meteors are bits of debris - rocks and dust - that broke off a comet a thousand years ago. This cloud of debris is floating in our solar system, and each year during late July and early August, planet Earth passes right through it. As the bits of debris enter our atmosphere, they quickly burn up and appear to shoot across the heavens.}

In all honesty, there were some slow moments, and a lot of looking at the sky. The trick seems to be to keep your eyes generally focused up, but to relax and just kind of stare blankly at the entire sky, rather than laser in on a particular section and squint with intensity. As my youngest said, you have to stop trying to see them, and just relax and let it happen. Good advice.

It also helps to have some entertainment, and I had plenty. Between technical talk about astronomical features of the sky, troubleshooting the blanket arrangements, brainstorming about what to eat for our post-midnight snack, and general tomfoolery, there was never a dull moment despite the wait times between meteoric events. Stargazing is more fun with lots of chatter to make the time pass.

All in all, it was a lovely, memorable evening and I am already looking forward to next year's Perseid meteor showers.
Posted by Diane Streicher @ Diane Again at 2:19 PM