A Scary Trip To The Docks

Last night, I invited Ranger to accompany me to one of his favorite places in all the land.

Yep, the beach. Good ol' Mukilteo Lighthouse Park, on the saltwater shores of Puget Sound and just a few miles down the hill from my house.

Ranger loves almost everything about this beach. First and foremost, he has a never-ending enthusiasm for romping up and down the rocks and sand, sniffing constantly. Oh wait, he always sniffs when he is outdoors. But still, the beach puts a special bounce in his sniffing step, and I can tell he loves it.

Here is a rarely-seen view of Ranger at the beach with his head up. Normally his nose is glued to the ground. But I tricked him into looking up by calling his name in a very excited tone. That's technically cheating, but he forgives me. 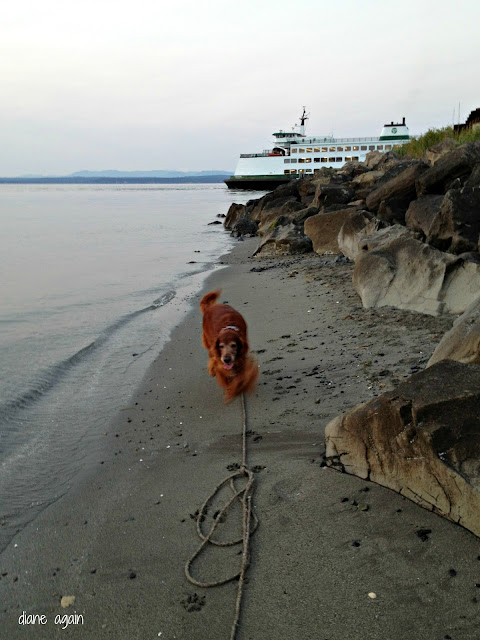 Although he's not all that keen on swimming, Ranger loves to walk out into the water. I guess that makes him a wader. While he's out there, up to his doggy knees in the very chilly waves (currently, the water is 54 degrees F/ 12 degrees C), he usually takes a little drink. Oh wait, Ranger, you are not supposed to be drinking saltwater, you crazy cur! But he does. No harm has befallen him yet. 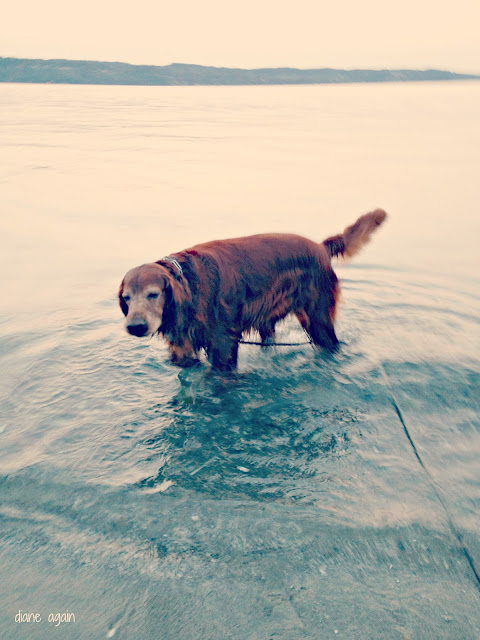 Ranger also loves the social scene at the beach. On any given sunny summer weekend evening - of which there are precious few - there are throngs of people out and about. As Ranger and I cruise down the length of the water's edge, we encounter people who are digging in the sand, throwing rocks in the water, playing games with balls, talking, flirting, texting, staring out in the distance, walking their own dogs, building fires, eating hot dogs, or playing guitars. It's fairly chaotic. 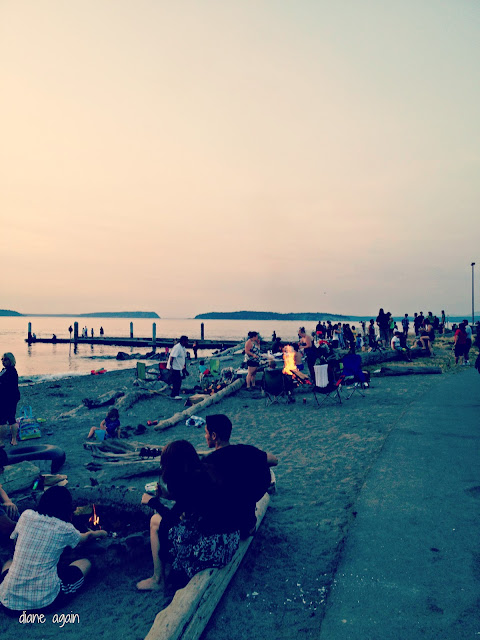 Ranger turns on his Irish charm as we make our way through the crowds, greeting other dogs, allowing toddlers to pet him, drawing compliments on account of his rugged good looks. He's quite the life of the party, and I can tell he loves this too.

Sadly, there is one thing about the beach that Ranger hates, despises and dreads with every fiber of his red-headed being.

See them out there? Two floating piers, strong and sturdy, but treacherously hinged so that they bob up and down in the waves, and adjust to the changing tides.

I love to go out on those piers, and honestly, when Ranger isn't with me, I head straight for them. 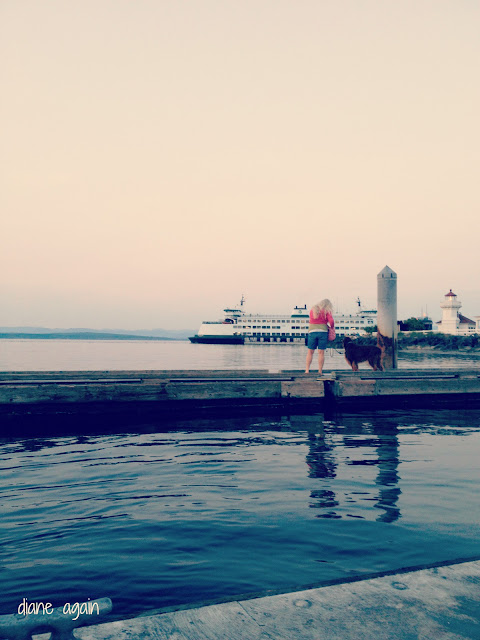 Poor Ranger despises the docks. He gets spooked as he crosses over the metal deck grating at the entrance to the docks. He cowers from the squeezed-in feeling of seeing water on either side of him, and such a narrow pathway for moving forward.

But most of all, Ranger HATES the rolling, pitching, unpredictable (to him) motion of those docks. Oh wait, why am I suddenly walking like a drunken sailor? It must be horribly confusing and I can tell he is miserable every second he is afloat. Here is a breakdown of the warning signs:

Look at that tail. It's tucked between his legs, instead of waving like a red fringed banner as it usually does. This is a sure sign of a freaked-out Ranger. 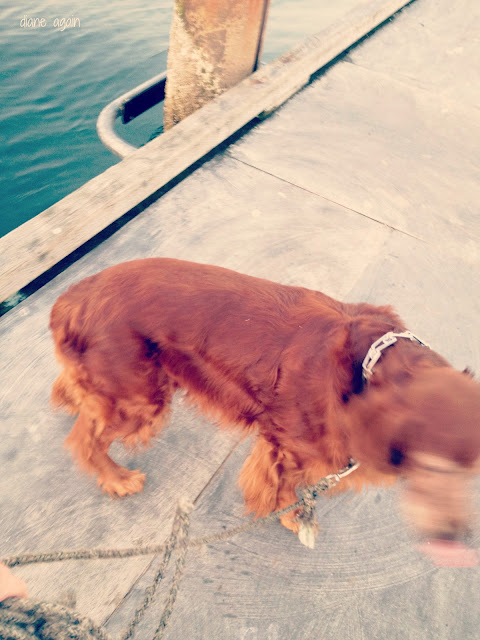 Now check out the ears. They are drooping way too low on his head; any time Ranger is happy, his ears are high and alert. These ears signal nervous trauma, without a doubt. 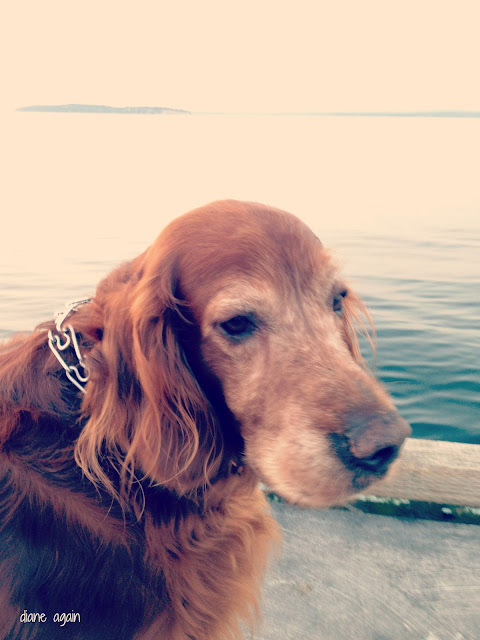 And finally, just in case there is any remaining doubt about his unhappiness, and what he would like to do to remedy the situation, Ranger stares back up the dock toward the shore. His whole body leans toward terra firma, an arrow pointed at its target. 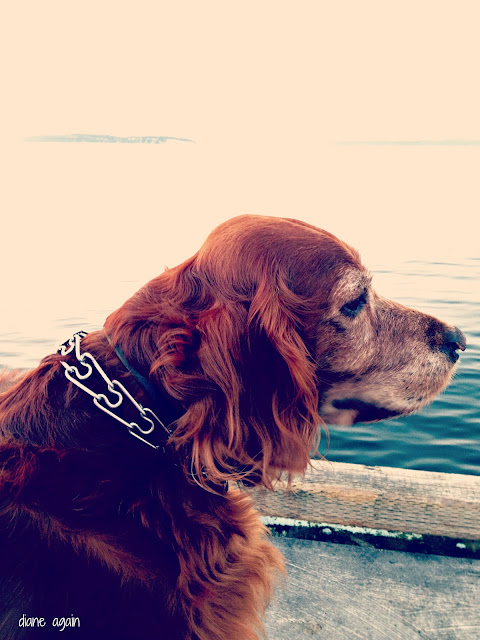 As we stepped back onto solid ground, I glanced back across the water and saw that we were just in time for the setting sun. Ranger waited like a perfect gentleman as I captured the shot. 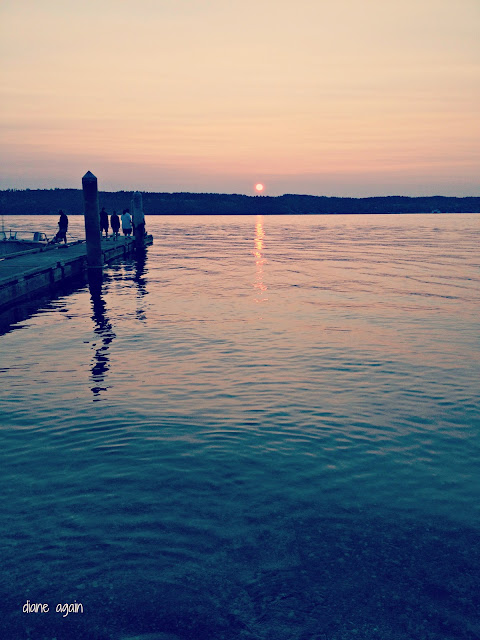 I guess that means he forgives me for another scary trip out to the docks.
Posted by Diane Streicher @ Diane Again at 2:16 AM