Why Banana Peels Make Me Laugh 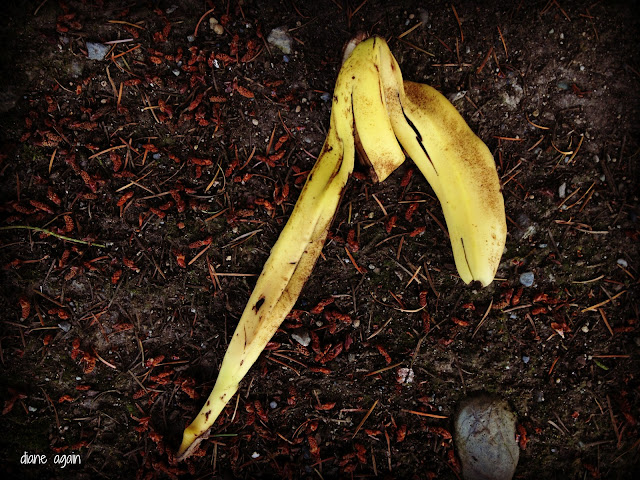 Today, as I was walking Ranger, I came across this banana peel lying by the side of the road. And I began to laugh out loud.

Yes, that probably does sound a little bit psycho, but let me explain. The peel reminded me of a very funny thing that once happened to me, and I want to share that story with you. But you know how sometimes, when you have a really hilarious story to tell, no matter how carefully you tell the story, it just doesn't seem that funny anymore?

Yeah, I have a feeling that this might be one of those stories. But I'm going to tell it anyway.

Once upon a time (about six years ago), I spent a day skiing at Mt. Baker with two high school students from my church's youth group. The drive up to the mountain was long and tedious; traveling along a two-lane highway through a number of backwoods towns, not every driver shared our single-minded enthusiasm for getting to the summit as quickly as possible.

As my young passengers and I vented our exasperation at the other drivers, we began to fantasize about one of our group's tried-and-true video game favorites, Mario Kart: Double Dash!!

{In this game, you cruise around a series of racetracks as one of several kooky characters such as Princess Peach, Toadette or Bowser. Driving any one of a variety of cartoonish vehicles, your team is also supplied with a variety of weapons, such as shells, mushrooms and banana peels, euphemistically called "items." These items can be used to inflict distress upon the other drivers or cast special advantages upon your own.}

Our ridiculous rantings soon veered off in the direction of this premise: what if items were real? What if we could punish that late-signalling left-turner with a blue shell, thereby blowing up his pick-up truck? Or how cool would it be if we could employ a turbo boost of triple mushrooms to get past the slowpoke in front of us, despite the lack of adequate passing lanes? And my favorite was this: wouldn't it be awesome to throw the banana peel at anyone whose driving is not up to par, thereby causing them to spin wildly out of control?

Oh, we entertained ourselves for quite some time with these item-related fantasies, until we eventually made our way to the resort, and spent the day skiing to our hearts' content.

On the way back home, my passengers promptly fell asleep, and I was left to contend with the lackadaisical country drivers on my own. As my thoughts returned to our Mario Kart fantasies, I beheld a sight that left me utterly speechless and frozen with disbelief.

From the sunroof of the blue SUV traveling in front of me, a hand suddenly appeared. With a quick motion, an object was tossed from the car and flew toward the double yellow line in the middle of the highway. In a flash, I realized that the object was a perfect banana peel, and it landed on the pavement  in the classic banana peel position, with the individual strips of open peel splayed out like a spider's legs.

It was a perfect, spot-on reproduction of the way banana peels are thrown in the game.

Maybe I experienced a delayed release of the crazy energy of a teenage rant session. Perhaps I was overly tired from a long day of skiing. But at that moment, I was overcome by an outburst of awestruck hilarity, and laughed until I cried.

Eventually my passengers woke up, and I told them what happened. But you know, it just didn't seem as funny to them. Guess you had to be there.

And maybe you are feeling the same way. I understand. But trust me, if you would have seen what I saw that day on the highway with your own two eyes, right now your cheeks would be hurting from laughing about it all over again, just like mine.
Posted by Diane Streicher @ Diane Again at 12:00 AM