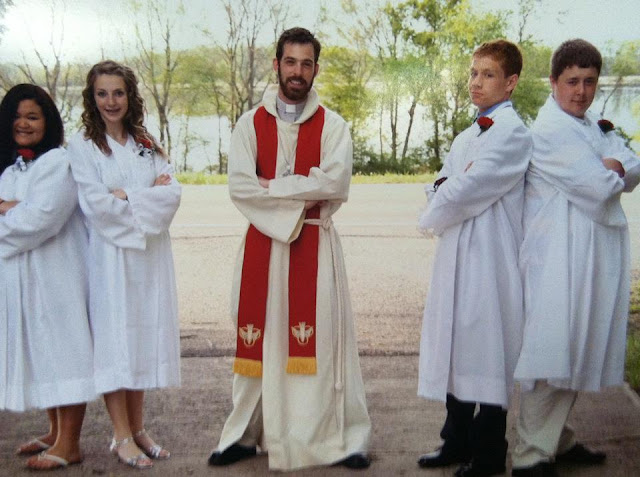 When I look at this photo, I see a Lutheran pastor and four of his newly confirmed young church members. Now if you have ever looked at photos of Lutheran confirmations, you know that they typically feature a no-nonsense pastor projecting gigantic waves of authority, presiding over neat and orderly rows of serious and slightly uncomfortable-looking teens.

This photo breaks that stuffy old mold. Based on the spirited and unconventional pose this group has struck, I can tell that this pastor is confident, fun-loving, and not at all afraid to be different. Drawing from the range of expressions on the kids' faces - the girls look happy and relaxed, the boys are trying to be cool - I conclude that they feel very comfortable with their pastor, and completely safe to simply be themselves. This, to my way of thinking, is exactly what a confirmation photo should convey.

When I look at the pastor in this photo, I also see my good friend, Wolfgang. He came out here to Seattle three years ago to serve as an intern at my church, and over the course of his year here, I got to know him pretty well. Although he was well into his third decade on this planet, and growing smoothly into his professional maturity, Wolfgang was still a man in the making. Like most of us who spend long careers as students, he wrestled with his credibility as a full-grown adult, and sometimes wondered if people in the real world would respect his professional leadership. My observation at the time was that Wolfie had everything it takes to be a rock solid pastor, but he was still growing into the role.

It's been almost two years since he left the west coast and headed back to Minnesota, He spent another year finishing up his schooling, and then signed on as pastor at a Minneapolis-area church, where he has served this past year.

All of that background flashes through my mind as I look at this photo, and as I take in Wolfgang's confident expression and notice the easy comraderie between him and these teenagers, I am filled with admiration and pride. And I think to myself, Wolfie, you have arrived!
Posted by Diane Streicher @ Diane Again at 2:37 PM