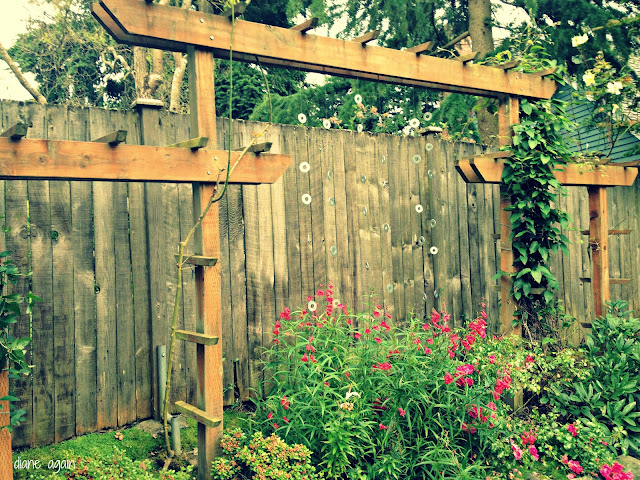 Ready for another Home Depot project? Yes, I do decorate my yard with stuff from the hardware store. I told you about my big red balls yesterday, and now I'm ready to move on to my shiny metal washers.

So I have this giant trellis in my back yard, built as a destination for climbing plants and a portrait-oriented element for a yard that was otherwise all about the landscape setting. When I designed this big lumbering structure, I imagined hanging wind chimes in the open center space, to create some interesting variation and prevent this from turning into a giant clump of green.

For the first couple years, I tried out several different sets of chimes, but even the biggest among them made little impact against this gigantic yawning space. I was not pleased.

So I did what any red-blooded American would do. I hiked on over to Home Depot and bought me a big handful of the biggest gol darn washers I could find. Cost me around ten dollars.

Back at home, armed with fishing line, paper clips and several episodes of Gilmore Girls, I proceeded to simply tie the washers onto the strings at varying lengths. I also tied a paperclip to one end of each string to serve as a hanger.  It wasn't hard. Honestly, it was much easier to put this mobile together than it was to follow a typical Loreli Gilmore rant. 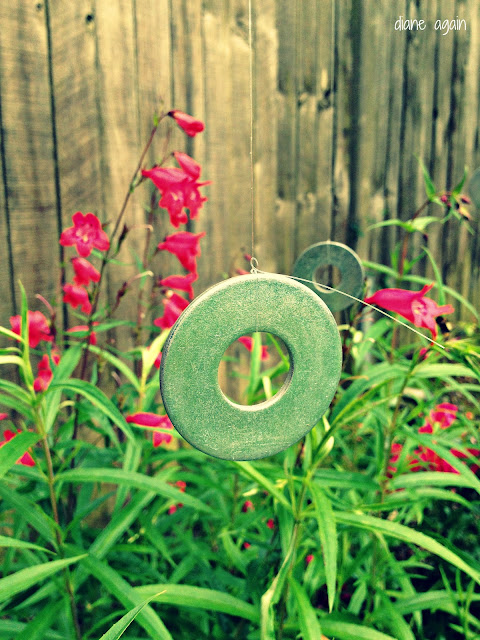 Outside, I tapped a few nails into the central beams of my trellis, taking care to hide them as best I could, and hung the paperclip leads on each one. You'd think that since I am a former CPA, I would be all OCD and precise about measuring out exact spacing and that sort of thing.

But I'm not. Honestly, I've come to accept and wholeheartedly embrace the fact that art looks best when it is slightly imperfect. So I just eyeballed the whole affair and left it at that. 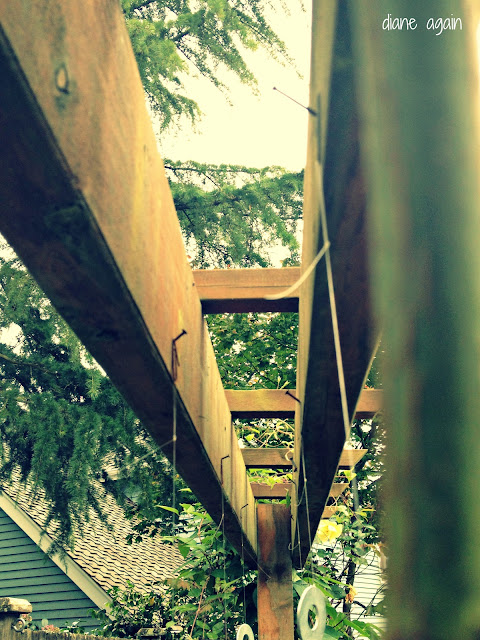 I love the way this shiny metal washer mobile turned out. As the six strings of washers slowly revolves in the air currents, the light catches the metal this way and that. The effect is quite striking. I thought I might endure some tangling problems after winter windstorms, but now that the project has been installed for over a year, I'm happy to say there has been no knotty drama.

Unlike the Gilmore women. They are constantly up to their eyeteeth in knotty drama. And witty banter. Like this.

Honestly, that show makes me a little crazy. Its contrived plots, snappy dialog and frantic pacing leave me worn out and frazzled

But my shiny metal washer mobile soothes my nerves, pleases my eye, and makes me very happy indeed. 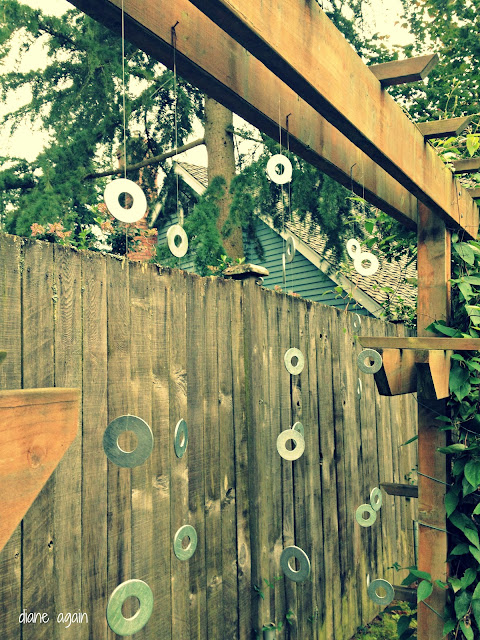 Email ThisBlogThis!Share to TwitterShare to FacebookShare to Pinterest
Labels: Art and Architecture, My Home and Garden