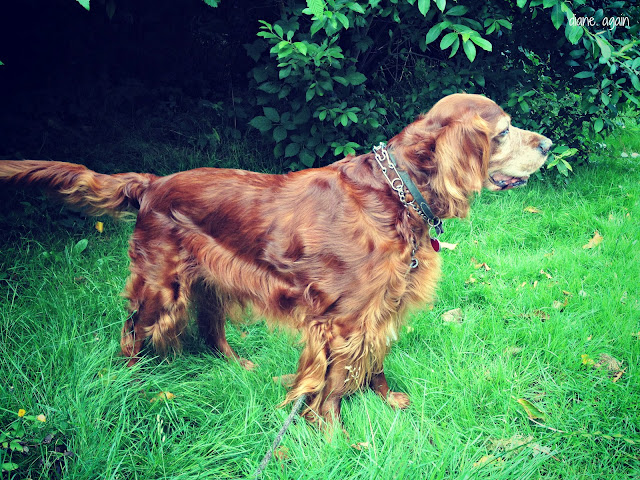 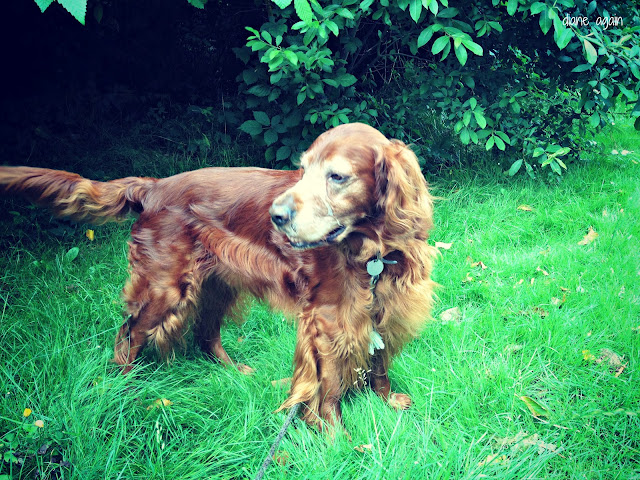 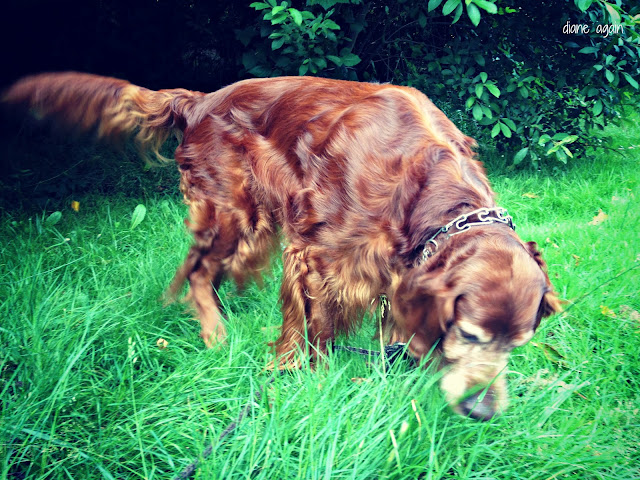 Here's a little story about my daily walk with Ranger. Before I can tell the story, I need to explain how exactly I take him on a walk.

When a normal dog goes on a normal walk, his owner attaches a six-foot leash to his collar, and they walk along, more or less, side by side.

This is not how I walk Ranger. Because he is a bird dog, born and bred for the hunt, Ranger has a very powerful nose. Even though we are not hunters, it's important for his own happiness and peace of mind that Ranger be allowed to exercise his hunting instincts as often as possible.

Which means that when we are out walking, Ranger puts his nose to the ground and sniffs nonstop. He has no interest in walking along at an even pace; he finds something interesting, sniffs till he is satisfied, then hurries along to the next interesting smell and repeats the process.

While this stop-and-go style is great fun for Ranger, it is incredibly annoying for the person on the other end of the six-foot leash. Which is why I don't use a six-foot leash. I use this: 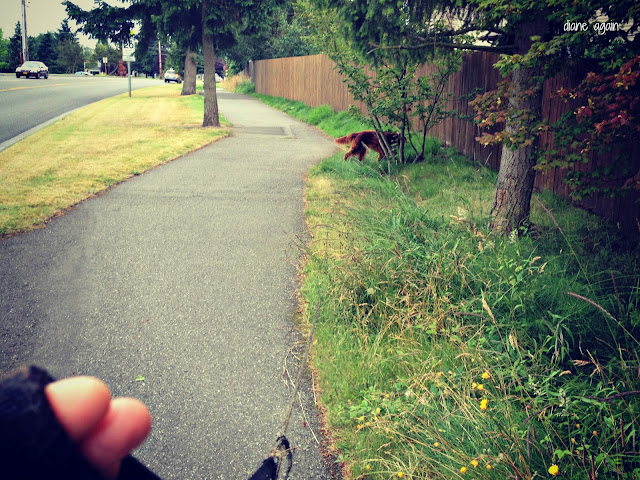 You're looking at a black six-foot leash attached to a 25- or 30-foot section of rope. This contraption solves all our problems. Ranger generally runs up ahead of me till he finds a scent he likes. As he stops to investigate, I walk on. Eventually, almost always before I get to the end of his rope, he realizes that I am way ahead of him, breaks off his research, and runs until he is way ahead of me again.

The only downside to this approach is when we come upon other walkers. Usually, Ranger minds his own business, and lets others pass by without any notice. But Ranger is a friendly dog, and when he sets his mind to giving someone a greeting, he can be quite thorough. Too thorough for some people's tastes. There's lots of waggling and wiggling involved.

So I generally keep an eye out for oncoming traffic, and quickly rein him in so that I can control him if he chooses to say hi to an unsuspecting passerby. 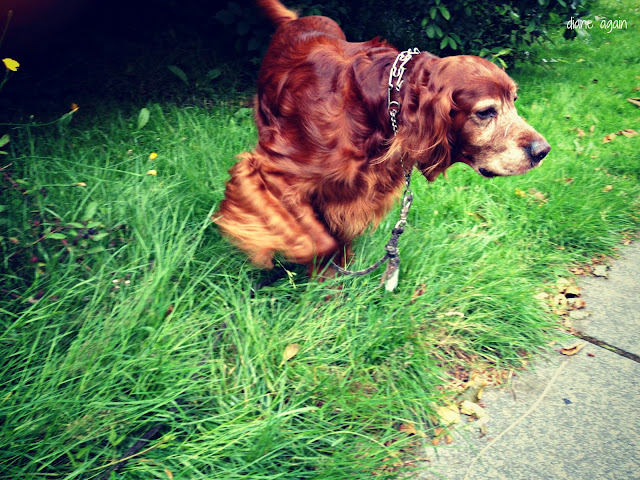 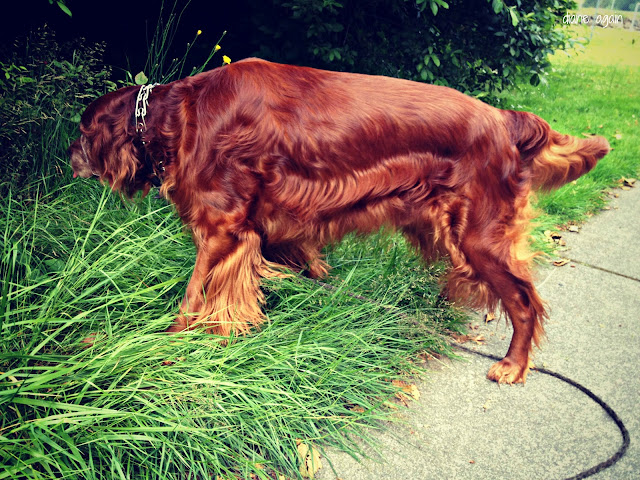 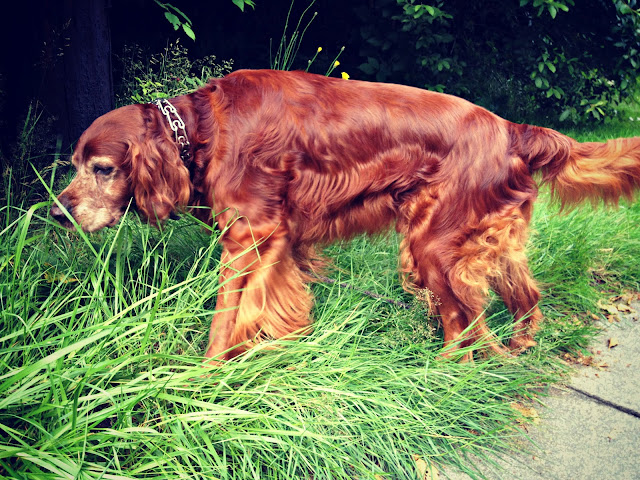 Alright, enough with the preliminary explanation. Here is the actual story.

Yesterday, on our walk, Ranger was way ahead of me, with his head buried in some weeds, as we were approaching a curve in the sidewalk. Suddenly, a man came walking around that curve, and I realized that I would never be able to rein in my dog before the man caught up to him.

Normally, that wouldn't bother me. Like I said, 9 times out of 10, Ranger is so busy sniffing that he pays no attention to whoever walks past him. And I can trust him to be friendly 100% of the time.

But I had a special concern about this man. I don't know him, but I've seen him around. He is a very gentle, almost shy, older Korean man, primly precise as usual in his immaculate white and pale blue striped golf shirt and natty white snapback. But here's the thing. I can just tell, beyond a shadow of a doubt, that he is scared of dogs. Especially big dogs. Big, friendly, energetic, wiggling and waggling dogs.

All these thoughts whirred through my mind in the two seconds that passed as the man approached Ranger, who was still sniffing. Suddenly, I saw Ranger yank his head out of the weeds and take an interested look at the man. Noooooooo! As Ranger briskly trotted toward the man, tail already wagging on the extra-fast setting, the man stopped in obvious distress.

As I literally held my breath, the two met. The man bowed ever so slightly from his waist, and gently held out an open hand to Ranger. In shocked delight, I watched as Ranger suddenly shifted his approach. He paused in front of the man's hand and ever so gently touched his nose to the man's fingertips. Just for an instant. Then he looked up at the man's face and wagged his tail enthusiastically. Just for another instant. Then Ranger turned and walked on, still wagging happily.

A few seconds later, the man and I passed. We greeted each other with pleasantries, but I don't remember what we said. All I can recall is his gigantic smile.

Buppable Ranger
Ode To Joy
Ranger And The Strangers
Celebrity Is As Celebrity Does
Posted by Diane Streicher @ Diane Again at 1:56 PM