Like all the other big ticket holidays of my childhood, Easters were spent at my mother's parents' comfortable home. They lived a few hours away from us in the poetically named town of Three Rivers, Michigan, so when we visited, we stayed for the whole weekend.

That meant that along with a passel of four kids came an energetic and clever Irish Setter named Kelly.

My grandparents were not dog people. Grandma grew up on a farm where dogs were considered working animals and treated accordingly; Grandpa was a bit put off about dogs altogether, though honestly, I'm willing to bet he was afraid of them.

But we loved our boy madly so my grandparents learned to tolerate their furry fifth grandchild. 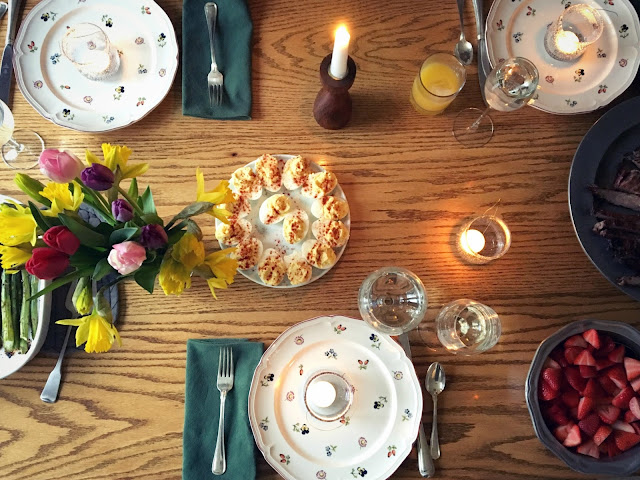 Easter dinner at my table.

It was the Easter of Kelly's fourth year, when I was about fourteen, that my darling dog put his grandparents' hesitant love to the test.

As usual, as our midday mealtime approached, Grandma was a flurry. Fresh-baked cloverleaf rolls, scalloped potatoes, home-grown green beans, pickled beets and a big ol' heap of mashed potatoes were paraded in from the kitchen to the dining room. But it was the cornerstone of the meal - a glorious golden glazed ham - that was the first dish to reach the table, triumphantly positioned near my grandfather's plate and poised for the ceremonial carving.

Banned from the crowded kitchen, I lingered silently in the dining room, watching the feast come together and waiting for an opportunity to make a few unauthorized taste tests.

I thought nothing of it as Kelly came wandering through the dining room.
I wasn't surprised when he stopped near the ham.
I smiled as he stretched his nose out toward that steaming platter and drank up the fragrant aroma.

But I was totally and utterly unprepared for what happened next. 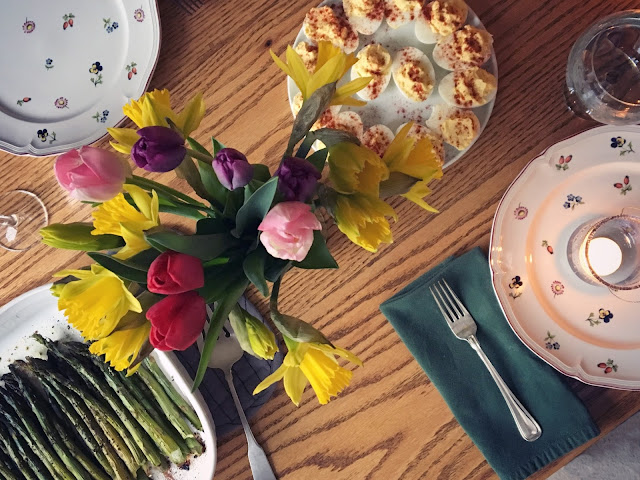 My second setter, Casey, never stole an Easter ham but he did once help himself to an entire meal's worth of Dover sole while I was changing a diaper.

In the blink of an eye, Kelly leaped up, braced his front legs against the table, sunk his teeth into that ham, and hauled it off the table for all he was worth.

I froze up, too horrified for words.

Kelly was halfway to the front porch when my grandfather caught sight of him.

My mother surely noted the panic in his voice and flew into the room.

I will never forget the look on her face as she caught sight of that funny, handsome, clever dog who by now had dropped the heavy ham onto the floor and backed the slippery thing into a corner so he could properly dig into his prize. I'm sure she was ninety-nine percent amused by her darling boy's audacity, but well aware that her father was about to blow a gasket. So she summoned up the necessary outrage, wrestled our Easter dinner out of the dog's chops, and told my grandfather to calm down because everything was going to be fine.

"Your dog ate half the ham. I don't see anything fine about that."

My mom had already deposited the partially gnawed ham back on the plate and circled through the kitchen to come back with the electric carving knife.

With a practiced skill - this was definitely not her first dog-bitten-food rodeo - she sliced away the offending bite marks and reshaped the ham to look almost normal again.

He was not impressed. 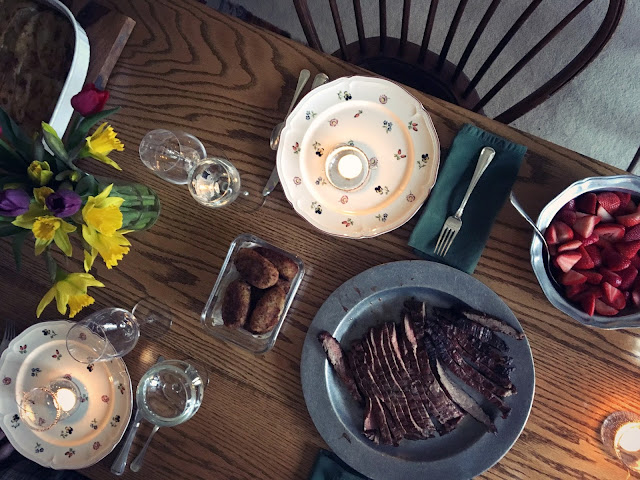 My third setter, Ranger, was usually not one to jump up and steal human food but he might have considered his options had he caught scent of this flank steak.

Kelly was sent outside where I'm sure he licked his whiskers and congratulated himself on a job very well done.

We kids were told in no uncertain terms to lay off the ham until our grandparents ate their fill of what was left.

And once the holiday weekend was over and we were back on the road, we finally enjoyed a hearty laugh over our crazy dog's ham dinner and hugged him all the way home.

Go here to read a sweet recap of all my pets
or here to find a collection of stories about their antics.
* * * * *
For a recap on my lifetime of loving the Irish, read these stories:
Erin Go Bragh
Bolter
Irish Setter Love
Ham Dinner
Pet Love
Happy Saint Patrick's Day

Posted by Diane Streicher @ Diane Again at 1:54 AM

Email ThisBlogThis!Share to TwitterShare to FacebookShare to Pinterest
Labels: Interesting People, My Home and Garden, Pet Love, Seasons and Celebrations