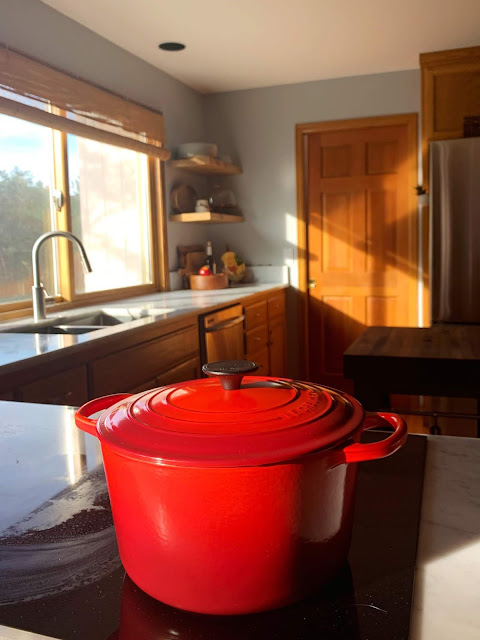 In what world do I live that allows me to purchase a wildly expensive, high end European cook pot and call it within the bounds of my self-imposed shopping ban?

This flaming red Le Creuset Dutch oven has been on my wish list for a long, long time.

For a long, long time, I've been making do with a 25-year-old cast iron model to cook dinner for the troops here several times a week. My old soldier was never meant for regular KP: I bought it in 1993 to use on camping trips and ended up cooking with it year round. Somewhere around 1997, I told myself that I was within my rights to upgrade to a more conventional, kitchen-friendly Dutch oven. I read a zillion reviews and decided that despite its steep price, the Le Creuset pot holds the best value and suit my purposes perfectly. I decided to buy one.

But I never got around to making that happen.

Fast forward to November 2019. Somewhere between Black Friday and Cyber Monday, I was scrolling around the Crate and Barrel website, picking up a few Christmas gifts for my homemaking daughters, and thought to myself, Say now, I wonder how the prices are looking on the Dutch oven of my dreams.

There she was, gleaming scarlet, generously larger than my cast iron model, in all ways perfect. And her usual $325 price tag had been temporarily slashed to $199.

So you know what I did?

Yep. at long last, I pulled the trigger. 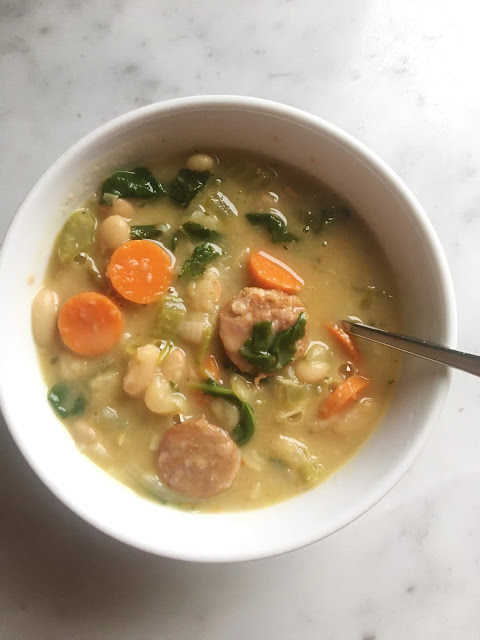 Two weeks ago, the new girl moved in, and I put her straight to work.

Among other things, she has served us up this delish sausage and white bean soup, a first-time recipe for me that won the family over. 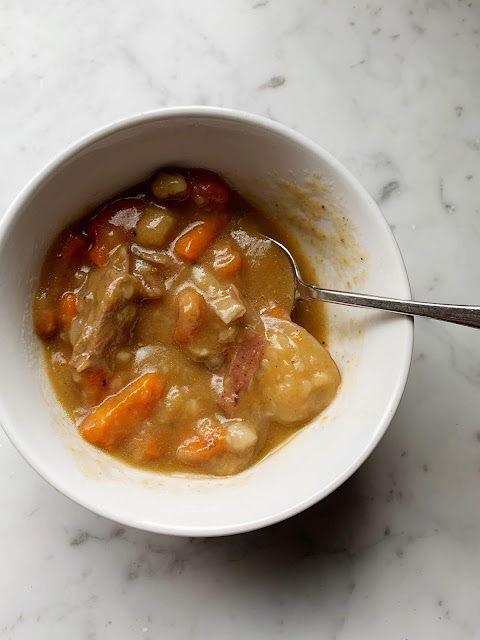 And this weekend, I whipped up a pot of my homemade beef stew. I'm mot ashamed to tell you that we fought over the leftovers for breakfast the next morning.

So my new Dutch oven has been officially enthroned as the queen of the kitchen. She rules from a semi-permanent position atop the range, because my injured shoulder does not allow me to heft her up and down from the pot cupboard.

Besides, I still need to rearrange the other pots to make space for her. Because my old cast iron Dutch oven will not be leaving me any time soon. He'll still be joining us for camping trips every summer and occasional overflow duties. He's earned his reward..

So what about  my year-long shopping ban? Technically, my rules require me to just say no to new housewares. But, after twenty plus years of consideration and a 39% discount, I decided that this was no impulsive, emotionally-driven consumption-crazed purchase, and I gave myself permission to buy a new red pot.

And I have absolutely zero regrets.
Posted by Diane Streicher @ Diane Again at 2:49 AM

Email ThisBlogThis!Share to TwitterShare to FacebookShare to Pinterest
Labels: Cooking and Eating, My Home and Garden