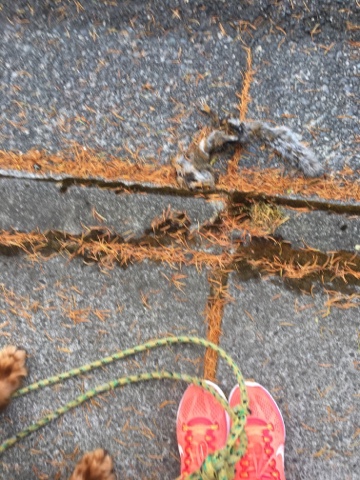 A secret smile slips across my face as I listen to my dog's footsteps fall on the soft ground under the trees.

I look back to see her nose down, lingering around the bases of the towering Douglas furs, scenting whatever has been there before her.

She's becoming a little hunter after all.

In the first few weeks after I adopted my girl, Gracie, she ignored the thirty feet of freedom offered to her every day on our long walks. Preferring to walk at my side, she didn't wander in the brush or even track scents on the sidewalk. Assuming that her life with her last owner didn't allow for much time in nature, I have been hoping and praying that her natural-born hunting instincts would eventually return.

I hear her gait shift gears as Gracie rushes to catch up to me. Expecting her to whoosh past me and take the lead, as she has also begun to do, I'm surprised that she slows as she approaches me..

I glance down just as reaches my right side and beams up at me, her eyes aglow.
With a decidedly dead squirrel in her mouth.

Two thought instantly and conversely pop into my head.

This is the deadest thing I have ever seen.
Flat as flat can be.
Drier than any autumn leaf.
Definitely in an advanced state of decay.
Though surprisingly intact and recognizable as a little furry animal.
I am grossed out beyond words.

But. At the same time:

The look of joy on my dog's face as she presents her treasure to me with the utmost love and devotion is sweet enough to make the angels sing.

My heart bursts with love for her.

Still, she holds this dead varmint in the mouth that occasionally rests against my pillow
and I'm not having that.

So I let loose a weird gurgling wordless cry of protest
and my dog drops her prize.

I praise her effusively
and we continue on our walk.

About a week later, she does it again.

After lagging behind to track among the trees, Gracie catches up with me and voluntarily heels in her proper place on my left, slowing her pace to perfectly match mine.

I glance down at her and there it is.

Her lips gently clench the same squirrel, even drier and deader than before.
Her eyes shine with pride and devotion.
Gracie clearly offers me her prize.

Gracie does not know what that means.

So I take her by the back of the neck and shake her until she drops the carcass. I kick it to the curb

Then I pull myself together and praise my pup to the high heavens.

A few days later, we encounter the squirrel again.

This time, I'm prepared. I scout the curb as we walk, and spy the flat flap of fur perhaps before Gracie does. But we both know it's there, and we stop to look at it.

I take a photo.

I praise my dog.

And we walk on to unknown adventures, my clever hunting dog and I.