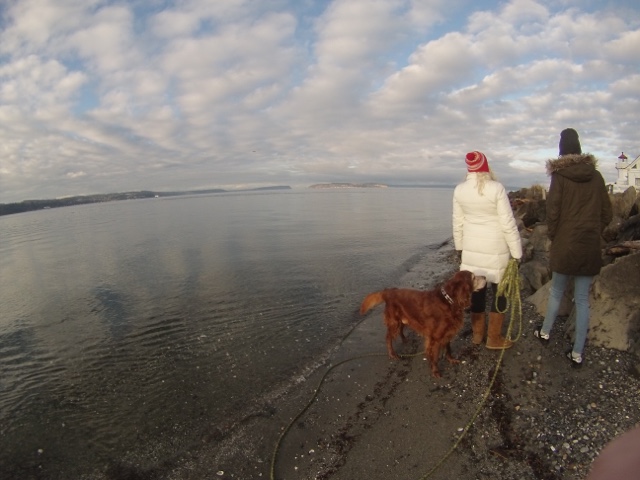 For all the walking we did together, there are very few photos to prove it. Here is a rare example, taken at a special outing to the Mukilteo Beach.

My sweet dog, Ranger, loved nothing better than a good walk.

During his early years. my daughters were teenagers and perfectly capable of escorting him on these adventures around the fields and forests of our neighborhood. We all took turns on the other end of Ranger's leash though I often dodged out to make dinner or finish a project, and delegated walking duties to my daughters.

But as they grew up and, one after the next, moved on to college and the working world, the responsibility for the daily walk fell more and more often to me.

And so it was that five years ago, when my youngest flew off to university life, I made a firm commitment to my boy. I promised Ranger that I would walk him every day, no matter what.
After some trial and error, we settled on a route that hit all his favorite spots and took us about 45 minutes to complete. Wandering the same circuit day after day, we became a familiar sight to the locals and while I discovered celebrity as the woman with the big red dog, Ranger was always the star of our show. We made a lot of friends together.

As age crept up on Ranger, he went through a few surgeries and medical hiccups that slowed him down temporarily. We'd take time off for him to recuperate but always hit the trail again as soon he felt ready, usually several days ahead of the vet's advice.

Here in the Pacific Northwest, this winter has been unusually cold. Sometime around Christmas, between the freezing weather and Ranger's increasingly fragile health, we began to take shorter and then even shorter routes. On the coldest days, I carried a blanket so when Ranger needed to stop and rest, we could wrap him up and keep his old bones warm until he started moving again.

By the last week of his life, we kept close to home. Just a stroll around the perimeter of our yard, and maybe a loop up to the nearby crosswalks, was enough to satisfy Ranger's need for speed. Our outings at the end of his life may have paled in comparison to the length and intensity of his walks in the old days, but Ranger's enthusiasm for his daily outing never waned.

He went for a walk every day until his last day.

On the day after Ranger died, as twilight fell, I pulled on my standard orange fleece, slipped my hands into worn leather work gloves, and tugged my hat down tight. Stepping out the front door, I left the long yellow leash hanging on its hook and walked down the driveway empty-handed.

Countless times over the years, I'd thought about this day. Preparing my heart for unavoidable loss, I had promised Ranger over and again that when he was gone, I'd keep walking. Our daily walks brought immeasurable joy to both of us, and I reassured him - or maybe it was myself - that even when death separated us, our joy would continue on.

So as I walked along our familiar paths in the gathering dark, I fought back tears and fixed my thoughts on happy memories. Ranger may be in heaven now, but his spirit is still with me.

And I will never walk alone.
Posted by Diane Streicher @ Diane Again at 2:39 AM