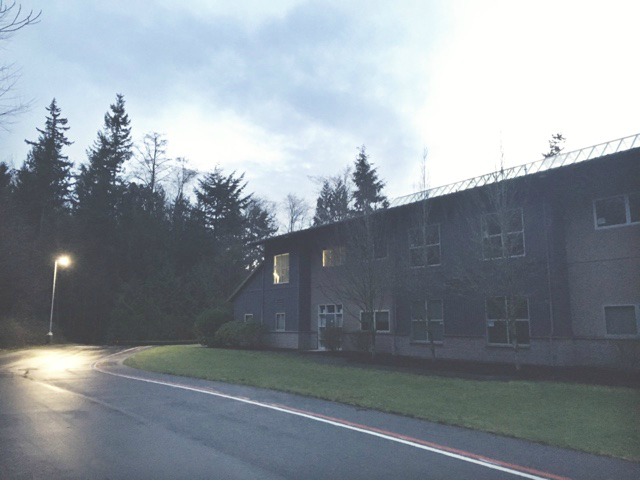 This is the back side of the secret building where Ranger and I walk every day.

We first come round at the far end, down by the street light,
and stomp along the lane that runs the full length of the back side of the building.

Barely visible in the shadows are the three slim trees that grow against the building;
the four large windows against the darker grey siding help highlight their location.

Yet another encounter with my owl today.

That's three times in one week. But this time was different than the others.

On our usual walk, with darkness gathering round, Ranger and I cornered our secret building. As soon as the back lawn came into view, my eyes immediately began searching for a white shape among the trees against the building.

I didn't see anything.

And honestly, I suddenly began to doubt that I had ever seen anything. Every day for the past week, I wanted so badly to see that owl, but how did I know for sure that my brain wasn't fooling my eyes into some sort of illusion or trick?

That was entirely possible.

My eyes continued to scan the bare branches of the trees against the building as my brain counseled caution and my feet marched along.

Two things happened at once.

Someone inside the building switched on a light. One of the windows directly behind the trees lit up in a flash, and the trees' silhouette now stood out visibly before my eyes.

And in that silhouette, I saw something that was most decidedly not a bare branch.

Near the top of the illuminated window, I saw the outline of something solid, with rounded lobes. Clearly, this was the lower tip of something that extended up into the darkness above the window. Something that looked almost like the tip of a bird's wing.

Adrenalin shot through my body.

My skeptical brain quickly offered up an explanation. This was no owl. This was a small cluster of dead leaves that still clung to the tree, as winter leaves often do.

Well. That would make sense.

But at the same time, my mind's eye clearly recalled that every single inch of those limbs was bare.

Now my skin began to prickle and my hair stood up.

In the same split second, Ranger made a bold move.

Though he had been happily prancing along with me in the center of the paved lane, he suddenly veered toward the lawn, in a direct line toward the base of the trees. He didn't bark or make any overt sign of aggression, but my keenly attuned hunting dog moved with clear motives of instinct and intent.

Then a third thing happened.

It's hard to describe because I didn't actually hear or see anything. But beyond the power of my human senses, I felt a bolt of energy hit me like a surge of electricity.

Chills swept over me.
My body trembled, inside and out.
My brain scrambled to try to make sense of what was happening.

Then I saw it.

Majestic, powerful, enormous bird.
Wings outstretched against the dark sky.
Swiftly, silently, rising up and away from the building.

When my owl was directly over Ranger's agitated red head, the bird abruptly altered his course. I watched as he executed a sharp ninety-degree turn, now traveling directly away from me and my dog, and quickly disappeared into the shadows of the wood.

No part of me felt fear, but I experienced all these things with an almost unbearable tension.

Our third encounter now complete, Ranger and I walked on in the darkness and all I could think was I couldn't wait to see my owl again;

I'm still not sure why this bird has such a profound effect on me.

And I realize that this sounds rather dramatic and extreme.

But after these experiences, I can honestly say that when I see my owl, I feel as though I am staring into the very face of God.


For more stories about my owl, read these:

Email ThisBlogThis!Share to TwitterShare to FacebookShare to Pinterest
Labels: Pet Love, Synchronicity, Travels Near and Far