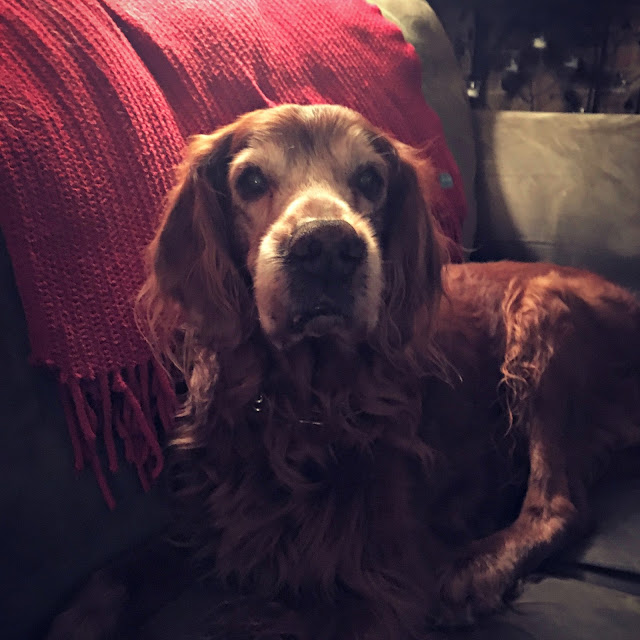 Ranger curled up in his favorite corner of the couch. The fur on his leg still looks damp from the rain.

My boy, Ranger, has really been on a good roll lately.

Not gonna lie. He is getting up there in years. And his health is not what it used to be.

But his days are a sweet succession of

long, lazy naps,
patrols around the backyard,
delicious drinks of cold, refreshing water,
more long, lazy naps, and
a handful of dog treats, as made available by the humans for good behavior.

As usual, his routine builds to the predictable late-afternoon crescendo: walk time.

You may recall that years ago, Ranger and I fell into the habit of taking our daily exercise at 4:20 p.m. Somehow, this clever boy set his internal alarm clock to this hour, and I've been living with the consequences ever since.

Just yesterday afternoon, for example, we were both dozing on the couch as I pretended to watch TV. All was peace and quiet, except for the rain pitter-pattering on the windows, the lolling thrum of the dryer in the next room, and my dog's gentle snores.

Suddenly, without ceremony, Ranger popped open his eyes, climbed down off the neighboring sofa cushion, turned around to face me, and began to whine.

When Ranger whines, there is no ignoring him. He's a regular mosquito in your bedroom at night.

I peeped one eye open to glance at the clock.

So off we went into the wet wilderness, and for the next 45 minutes, my dog wagged happily as he hunted up and down suburban sidewalks, greeted the other neighborhood dogs with glee, heeled smartly as we crossed streets, and generally behaved like an all-out gem.

Soaked and satisfied, we headed home, where I whipped up his deluxe dinner. We raised him on simple dry kibble but lately have come round to treating him to a variety of pricey dog foods, stirred together into a scrumptious stew.

Ranger ate every bite with relish, stepped outside for a long drink of cold water, then curled up in a delectable if damp ball on the couch. Though he kept a close eye on me, following along as I moved from room to room, Ranger slept like an angel for the rest of the evening.

In fact, he's snoring at my feet right now.

I don't know how much life is left for Ranger. But then, none of us know for sure, do we.

However, I am completely certain of one thing - Ranger is making the most out of every sweet moment of his life.

I have written literally dozens of stories about my boy, Ranger - here are a few of my favorites:

With Joy And Wild Abandon | a dog on the beach

Camping: It's All About The Memories | oh, but that photo is one of my favorites

Adventures In The Woods |  a muddy dog is a happy dog

Posted by Diane Streicher @ Diane Again at 1:33 AM