Today was a busy day full of algebra students taking final exams. After a whirlwind of dropped signs, forgotten formulas and senseless mistakes, I celebrated with the victors, who are now free until September, and made remedial plans with the vanquished. Quite a complex and emotional process.

At home, I craved nothing more or less than a quiet afternoon. To be honest, I wanted nothing more than to lie on the couch watching Arrested Development on Netflix.

What I got was even better than Buster.

I was heading out the door with Ranger for our daily constitutional when I suddenly remembered my English daisies in bloom. The path leading off my patio was lit up with their sweet white faces, and the late afternoon sunlight was perfect for photos.

Knowing that Ranger was totally revved up and halfway down the driveway ahead of me, I hollered up the stairs to my second-born and asked her to grab me some photos.

She did. I found these shots on her camera. 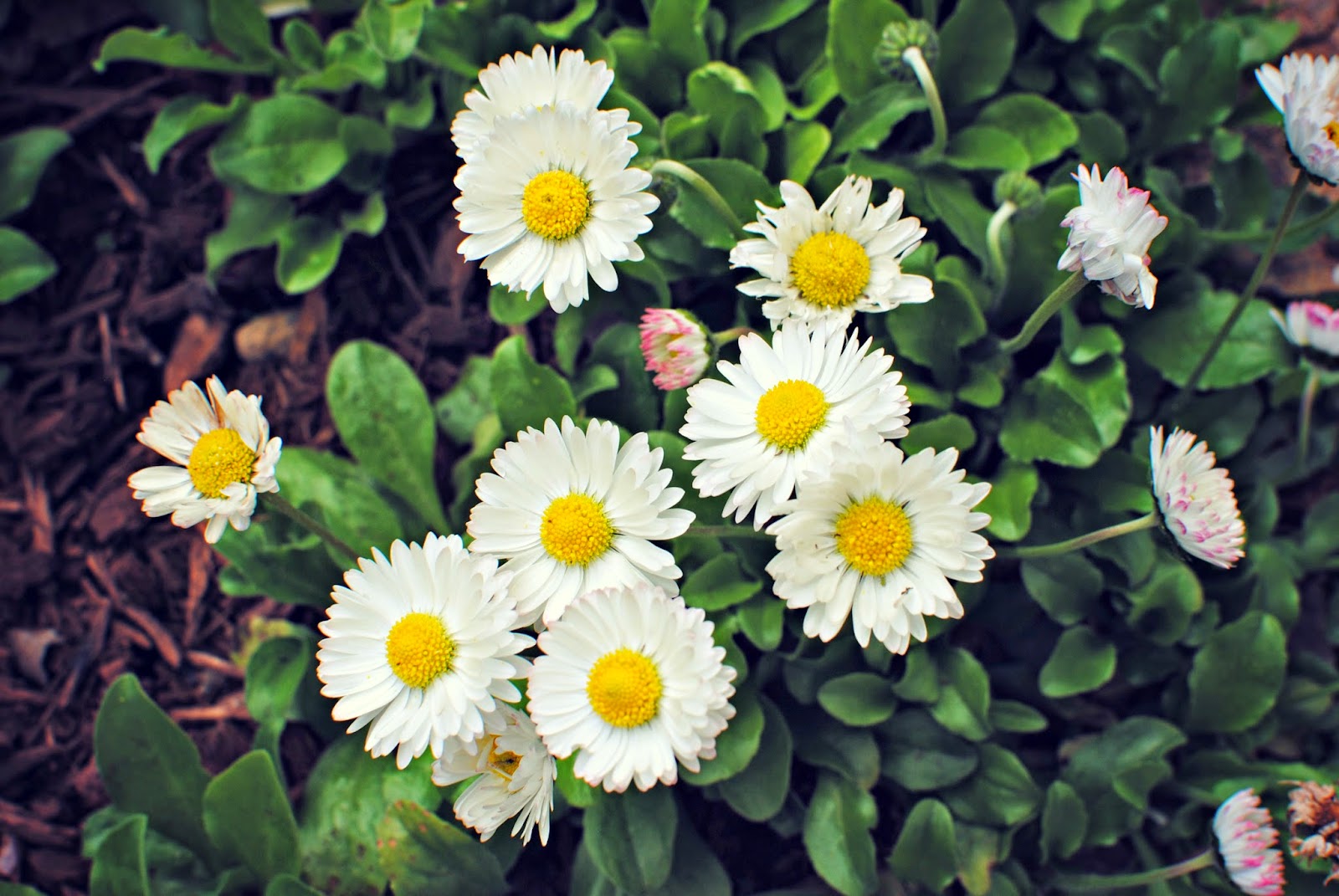 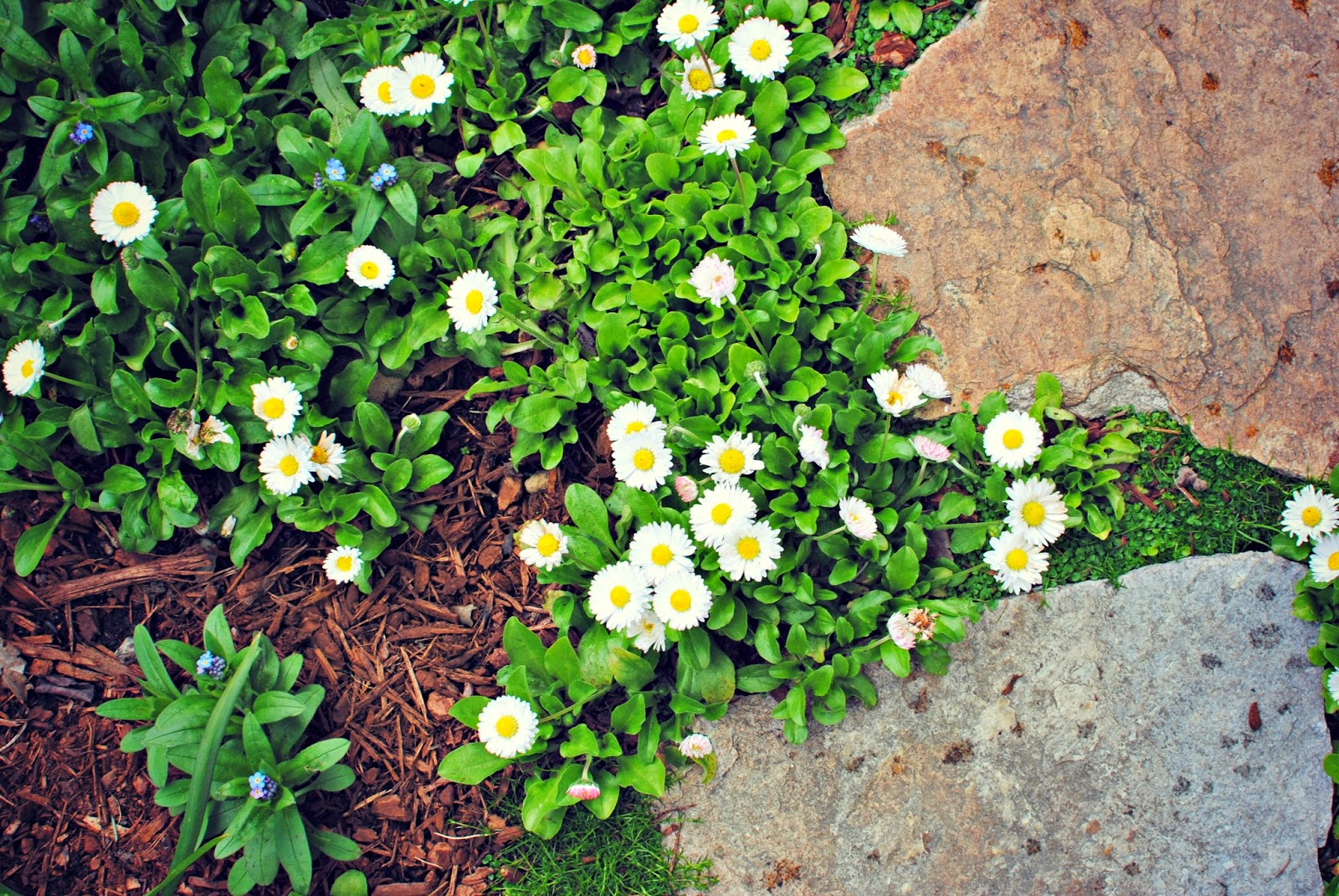 But as I scrolled on past the flower shots, I found a little surprise. 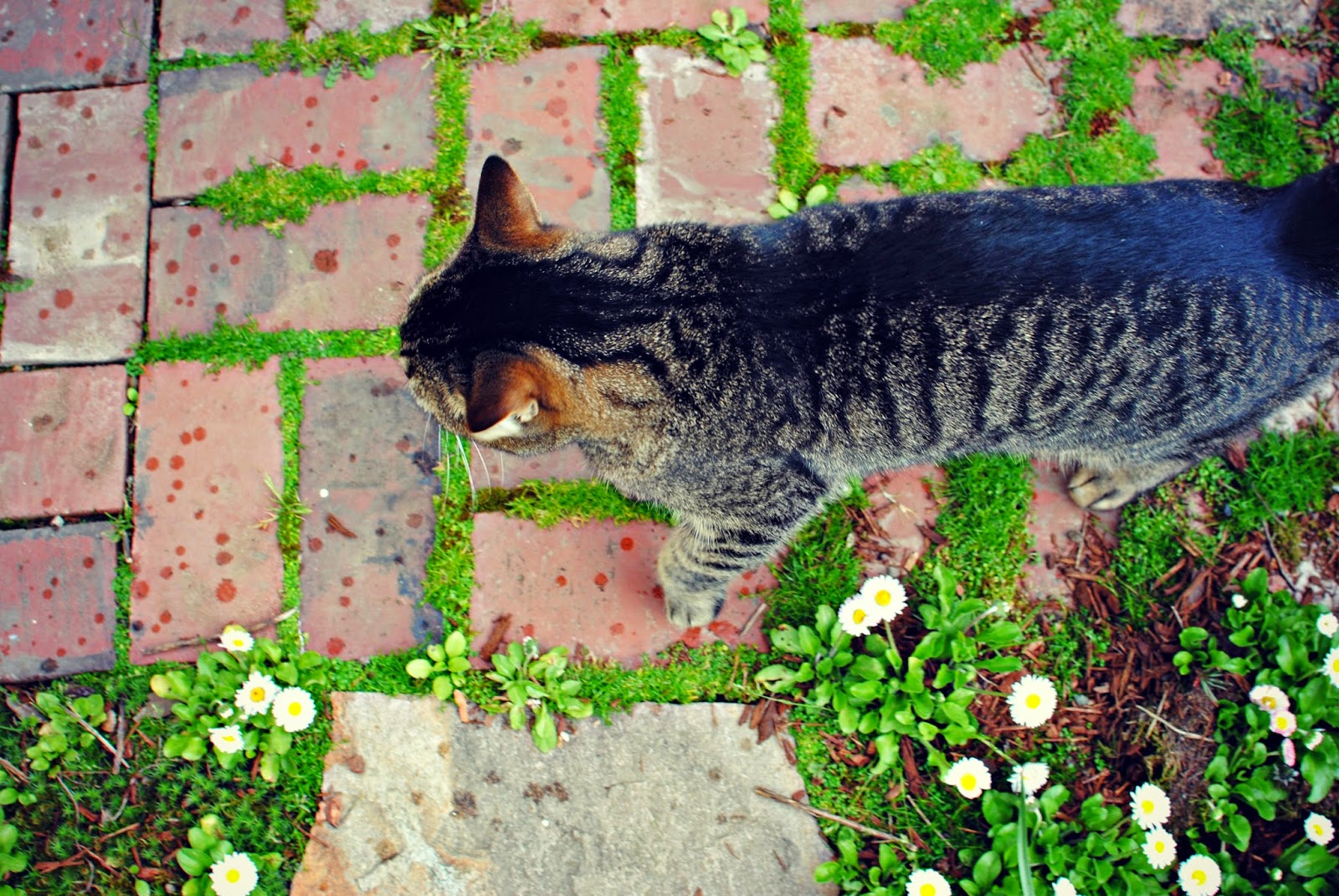 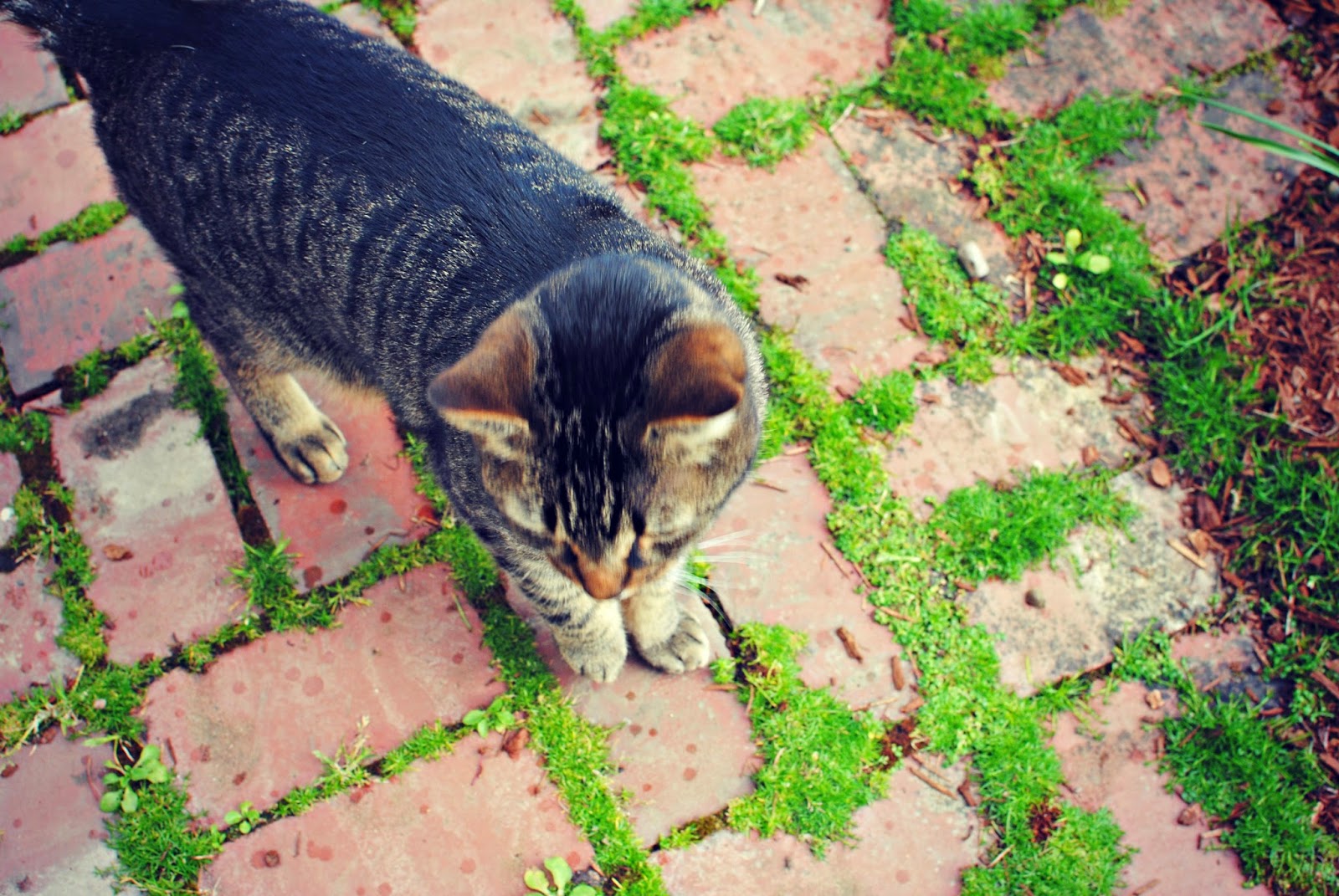 Apparently, Cedric - the grey tabby among our trio of cats - made an appearance during her photo shoot. In classic Cedric style, he undoubtedly rubbed against her legs and purred with vigor as she dodged the raindrops and tried to capture his cuteness.

In the meantime, Ranger and I were dashing between the sprinkles as well. Out on our usual route, we encountered a couple walking toward us. Well before we met, I noticed they were both wearing great big grins on their faces. As they came closer, I noticed them staring at me..

Well, not exactly at me. At my left leg.

And who should be marching along in perfect obedience and Irish swag, right next to my left leg?

As the gap between us narrowed, the woman spoke. "I love looking at your dog," she enthused, obviously familiar with seeing us out and about. "He's so cool."

I laughed and thanked her for her kind words.

The husband didn't speak, but beamed even more broadly as Ranger and I squeezed past him on the sidewalk. Ranger wagged effusively.

We got back home just as the late afternoon shadows lengthened and the sun dipped toward the horizon. With a heart full of spring flowers and happy pets, I was just about as content as a dog after a long walk, or a cat in the sunshine. 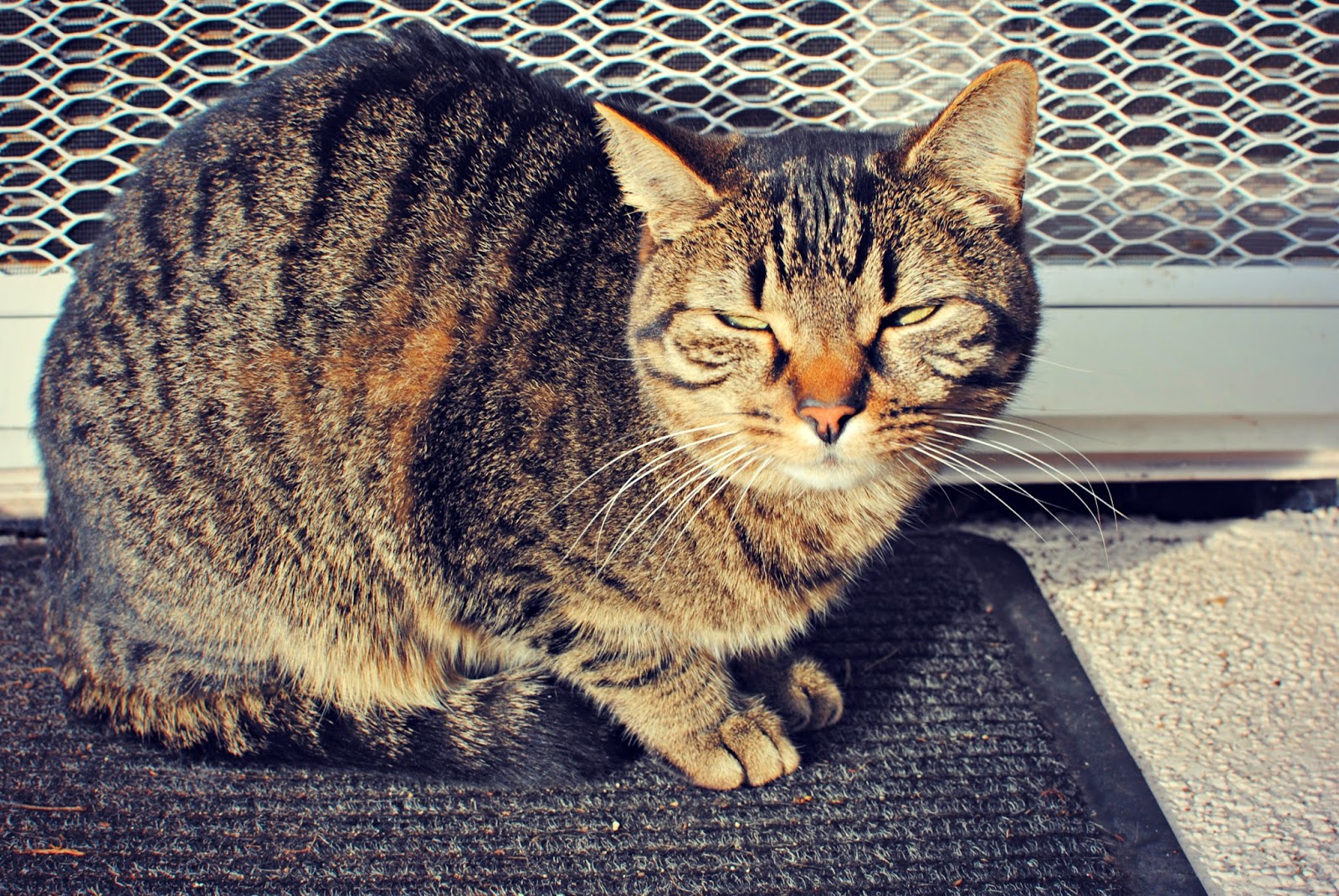 Or a Bluth doing a chicken dance. Which is pretty darn happy indeed.

Email ThisBlogThis!Share to TwitterShare to FacebookShare to Pinterest
Labels: Art and Architecture, My Home and Garden, Pet Love