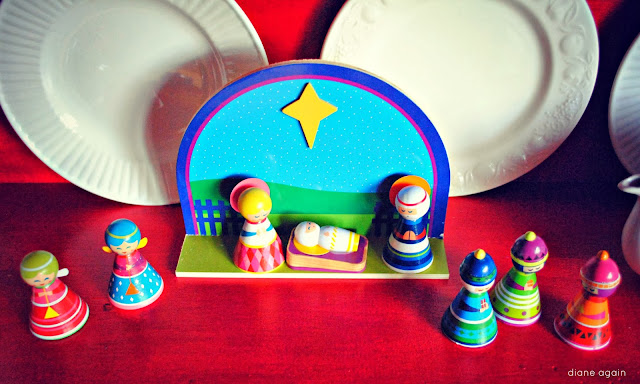 On the first Sunday of Advent, little scenes of the nativity started to pop up around my house.

Although I have at least ten nativity sets, I bought this one last month. It's nothing fancy, and quite inexpensive, but I love the simple shapes and bright colors.

But this morning, when I walked into the kitchen and this bit of Christmas cheer caught my eye, I realized I had made a huge mistake.

Instinctively, I arranged these tiny figures in their proper positions for the story that unfolds on Christmas Day. But that holy morning is several weeks away, so my scene is out of kilter with the proper time line.

With a few quick adjustments, everyone was moved to their proper places for T minus 22 days and counting. 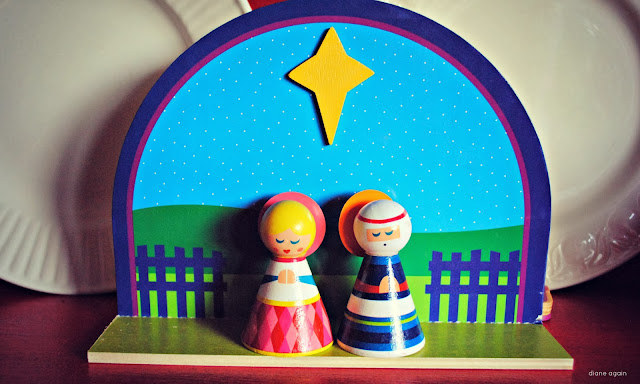 ^ Teenage Mary and and her carpenter hubby, Joseph, the expectant parents, are happily chilling at home in Nazareth. It's been a bumpy few months, what with Mary getting that surprise visit from the angel explaining how she had been chosen to bear God's son, and Joseph trying to wrap his head around the fact that his supposedly pure fiance is expecting a heavenly child. But they have come to terms with their weird fate, and are waiting out the last weeks before the baby. 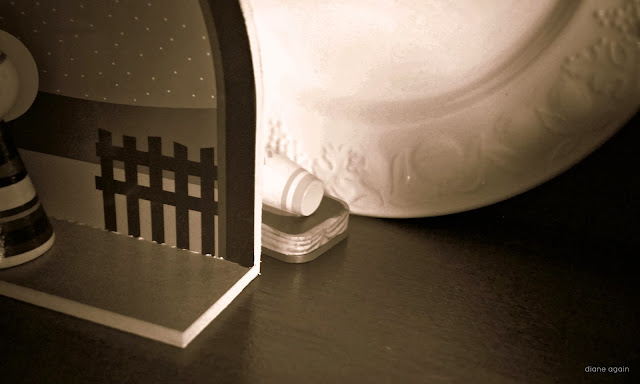 ^ Baby Jesus is still a bundle-of-joy-to-be. Technically, he should be a smooth round bump under Mary's pink frock, but that's kind of hard to approximate with wooden dolls. So I stashed him behind the backdrop till he's ready to be born. 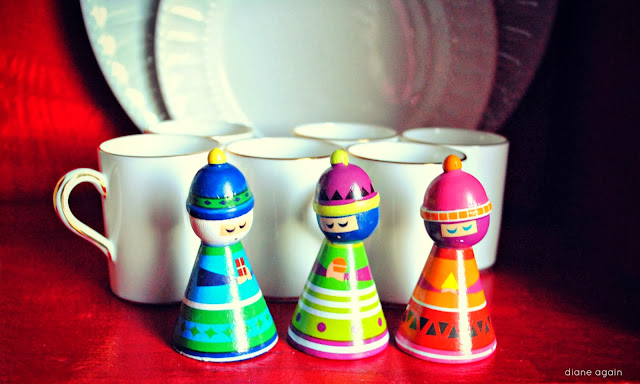 ^ Now, these three wise men, who will eventually follow a prominent star to find the newborn babe, live in a far-off land. Definitely to the east of Bethlehem, it's traditionally believed that they were from Babylonia, Persia or Yemen. In any case, several weeks before Jesus' birth, they would have been taking care of business as usual in their homeland with not a clue about the adventure that would soon unfold.

I did my best to approximate their distant homeland, and shoved the three little dudes into the bottom corner of the cupboard. 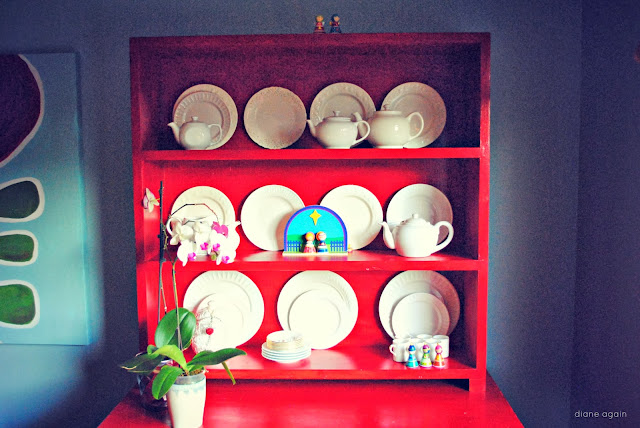 ^ See? There they are, down in the bottom right shelf, doing their wise man thing.

So. With the Holy Family and the religious authorities relocated, I turned my attention to the last group of figures - the angels. Well, it's no mystery where angels belong. Just look up. 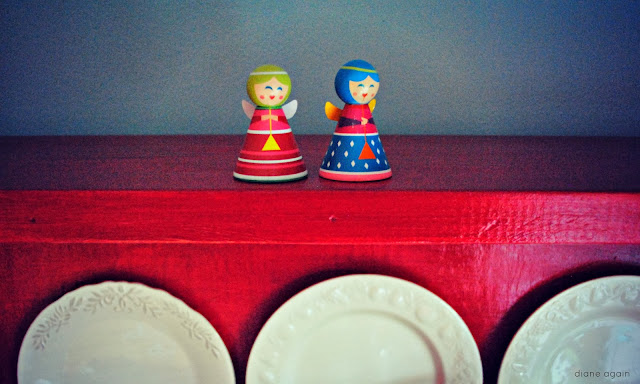 ^ Yep. There they are. Two celestial beings, perched at the very top of my cupboard. I like how the pale blue wall and the white round plates give off a heavenly sky-and-clouds vibe. And there my two sweet angels wait, trumpets in hand, for the baby's birth. On Christmas night, they will appear in the dark skies over Bethlehem, and their songs will spread tidings of great joy.

For now, they must wait, just as I do, for the season to unfold. And we are all waiting exactly where we belong.

Read more about my Advent adventures:

Hope, Love, Joy, Peace...And Chocolate
Families Matter
The Christmas Tree Farm Revisited
Advent Adventures
To And From
Mystery Of The Manger
Christmas Cards
A Two-Part Invention
Quick And Dirty
No Day But Today
A Vegan Murder
Lessons From A Lettuce Wrap
December 20, 2013
Lighting The Way
Sex In The Workshop
It's Complicated
Posted by Diane Streicher @ Diane Again at 11:55 PM

Email ThisBlogThis!Share to TwitterShare to FacebookShare to Pinterest
Labels: My Home and Garden, Seasons and Celebrations, Synchronicity