Trying to cook new dishes from other cultures.
Making up my own recipes.

So when my fourth-born mentioned to me that she's been hankering for a British pasty and wanted my help in improvising a recipe, I was totally on board.

A pasty is basically a hand-held meat pie. Flaky crust on the outside, tasty bits of meat and vegetables on the inside, this is a perfect workingman's lunch because it is portable and filling. The history of the pasty is murky, but commonly this hearty fare is associated with coal miners from Cornwall, England. Over the past few centuries, as the coal miners have spread around the world, this rustic treasure has become known far and wide.

Following my instincts and little else, I started with potatoes and carrots cut into bite-size bits. We found these adorable tiny red, yellow, and purple potatoes at the store and thought they looked legit. Kinda like something that would have grown in the rocky soil of a coal miner's home garden. 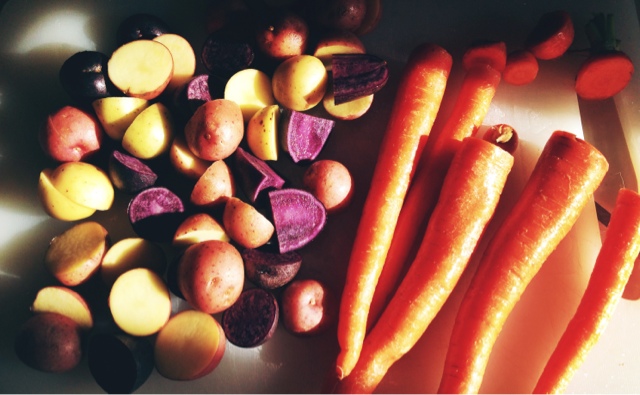 Along with the vegetables, we added beef, onion and mushrooms. Really, we just tossed in what sounded good to us in the moment. And we precooked every ingredient, which I've since learned is a departure from traditional pasty baking.

We wanted our pies to be extra moist and juicy so we made a peppery, seasoned roux sauce:

Then we made two batches of my basic pie crust recipe:

We used the dough to line six small baking cups, piled in the veggies and meat, and topped them off with a big spoonful of sauce. Then we added a top crust, and crimped the edges together. 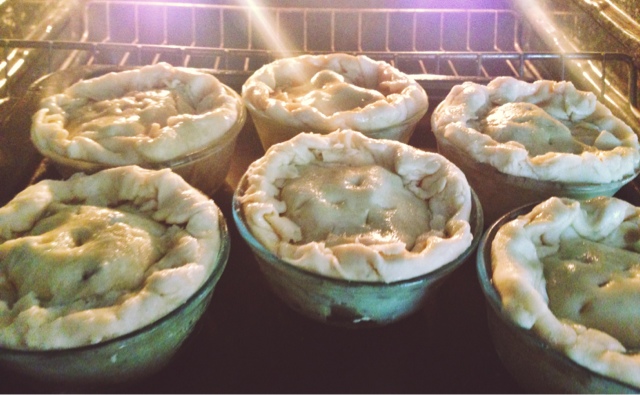 Traditional Cornish bakers do not trifle with silly little baking cups. They make their pies free-hand.

Some day, I shall aspire to such greatness. But for now, I use cups. Whatever.

We baked the little morsels at 425 degrees F for about 15 minutes, then turned the oven down to 350 degrees F for another 20 or so, until the tops looked golden and we saw bits of sauce bubbling out. 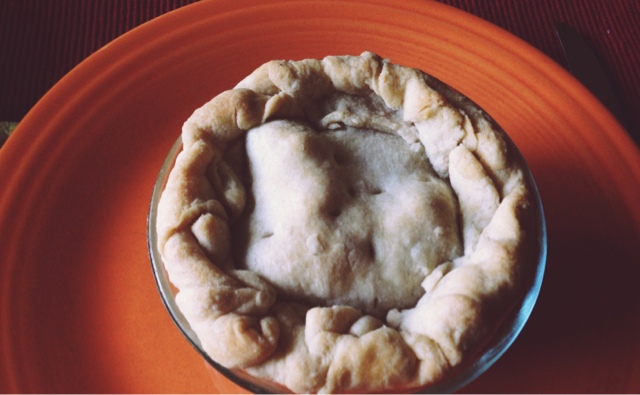 Unlike Cornish coal miners, we ate our pastys fresh from the oven. I served them piping hot in their little dishes, but we all promptly turned the cups upside down and popped out the pies.

Then we used our forks to break open the crust and say hello to the savory goodness inside. 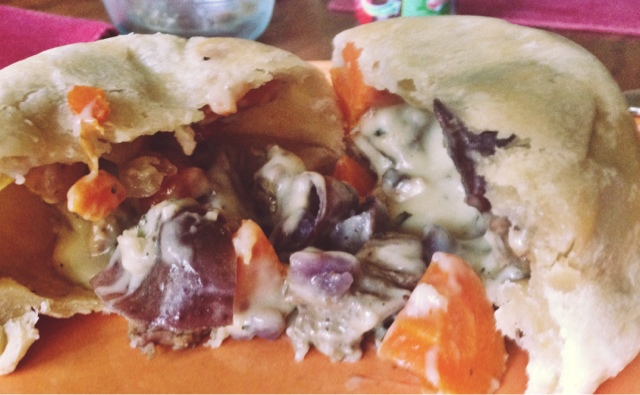 If I was a coal miner on a lunch break, and I reached my grubby black hand into the pocket of my worn coat pocket, this is exactly what I would want to pull out. Warm, filling, hearty and oh so very yummy. I can see why this meal caught on so well in the coal mines, and I'm glad it's still going strong.

Obviously, I am not a coal miner. But here's a fun fact: I am a descendant of Welsh coal miners who emigrated from the UK to eastern Canada and eventually made their way to the USA.

So as a matter of fact, I am a coal miner's daughter. It's no wonder then, that making and eating these pastys comes naturally to me.

My Love Letter To The Kelantanese
I Will Bake You A Pie
Universally Speaking
Now That's A Pizza Pie!
Heavenly Peach Pie
Sweet Success
My Thanksgiving Feast
"T" Is For Thanksgiving
More Than Ever
Leftover Pie Dough
Posted by Diane Streicher @ Diane Again at 1:33 AM