There are a lot of reasons why I love to spend time with children. For starters, they are usually funny, always clever, and quick to change gears when a situation gets boring. Also, they are refreshingly honest.

But one of my most favorite things about preschoolers in particular has to do with the way their fresh little minds work. Those of us who have been around for a few decades have relatively fixed ideas about how the world operates, and a rather literal interpretation of daily life. But the five-and-under set, with their untamed neural pathways and rich imaginations, can often make associations that I cannot.

Here's a perfect example of what I mean.

Last evening, my three-year-old friend, Aleesya and I were busy in her Malaysian playroom. Well. Clarification. She was busy, and I watched her in motion.

Sitting at her little desk, she would methodically rip a single page from her notebook and place it on the table top. Then she would reach inside the desk, pull out a small handful of plastic magnet letters, and set them in the center of the paper, piling them carefully just so. With great concentration, she would deliberately wrap the paper around the letters, squishing and squashing it in her hands. And when she was pleased with the finished effect, she placed the little bundle in a neat pile at her feet. 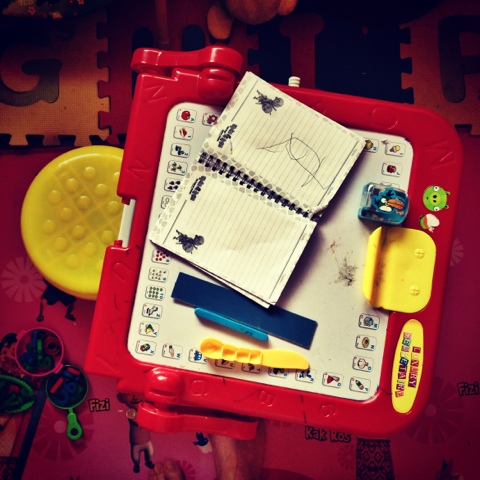 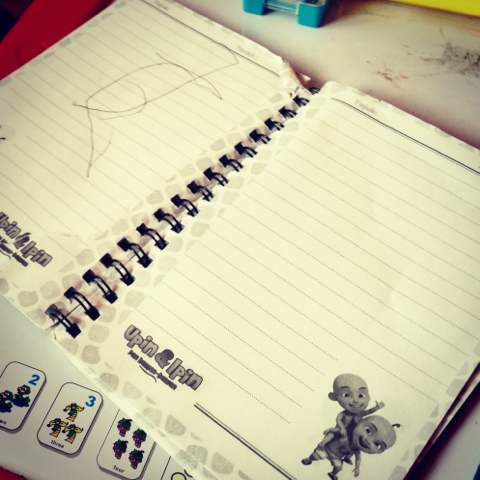 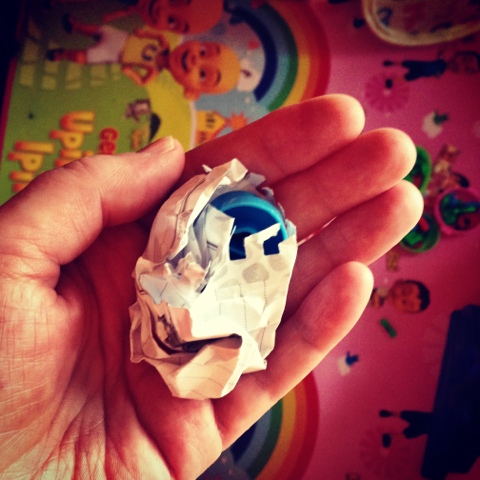 I watched in fascination, not daring to intrude upon this mysterious process, until I was invited to join in. My first assignment was to fish the letter magnets out of the desk; eventually I was promoted to paper-ripper-outer. Aleesya worked on in cheerful determination, a clear plan obviously in her mind. I had no idea what we were doing.

As the pile of finished bundles on the floor grew larger, I dug a little cloth basket out of her toy box and proposed that we put the treasures inside. Despite our language gap, Aleesya understood me perfectly and beamed her approval.

In due time, all the magnets were wrapped, and the cloth basket was filled to the top. I still had no clue what was happening. But I was about to find out.

Smiling radiantly, Aleesya took the basket full of letter-magnet-paper-wads, held it out to me in an obvious gesture of generosity, and pronounced two words in her native tongue:

In a flash, I understood everything.

For those who have never eaten breakfast in Malaysia, let me explain. Nasi lemak is a popular dish that consists mainly of rice, hard-boiled egg, and spicy seasonings It's often purchased at roadside stalls, and wrapped in paper bundles for easy transport.

So while I had only seen plastic letters and pages torn from an Upin and Ipin notebook, my little friend had been preparing fresh packets of a delicious rice breakfast treat. At Aleesya's prompting, we quickly opened and "ate" the whole basket of nasi lemak, and then unceremoniously moved on to another game. But the magical spell that her imaginative play had cast over me lingered for the rest of the night.

This morning, after Aleesya had already awakened and left the house, I tiptoed past the playroom. Remembering her nasi lemak game, I peeped into the room, just to see if any traces of our play remained.

And guess what I found. Three little plastic cooking pots had been laid out neatly on the floor, each one heaped full of those same plastic magnet letters.

But when I took in the scene through my recently refreshed three-year-old's eyes, I realized that today's menu is featuring nasi goreng. 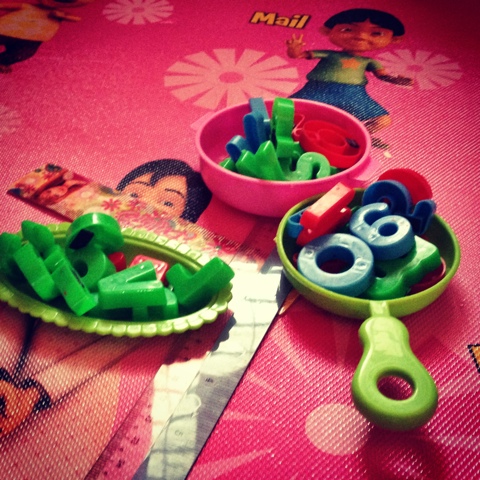 For more stories about my favorite Malaysian playmate, Aleesya, read these:

To find all the stories of my amazing adventures in southeast Asia, go here:

Me in Malaysia
Posted by Diane Streicher @ Diane Again at 11:32 PM

Email ThisBlogThis!Share to TwitterShare to FacebookShare to Pinterest
Labels: Cooking and Eating, Inspired Learning, Interesting People, Me in Malaysia, Travels Near and Far