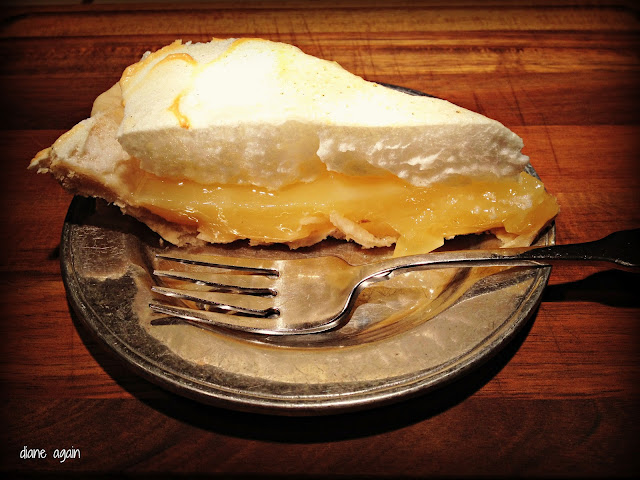 Tonight I made a lemon meringue pie. It's a dish that calls up two strong memories for me.

First, it reminds me of my father. I rarely, if ever, mention him in my stories. That's because I'm a firm believer in what Thumper said: "If you can't say something nice, don't say nothin' at all." So I'll simply mention that when I was very young, he often chose lemon meringue pie for his birthday treat. Despite my mother's reluctance to make them because she thought they were beyond her skill level, she did her best to please him. I remember her efforts as perfectly delicious.

Years later, when I was working as a prep cook in a family style restaurant, my boss expressed great confidence in my abilities by promoting me to the lemon meringue pie baking team. I was the only teenager on the staff to earn this privilege; the other bakers were grown women who had been making meringue pies for decades. After being raised in the shadow of my mother's doubts in this realm, I was deeply honored to be considered a lemon meringue pro.

So now, whenever I make this luscious and tangy plate full of heaven, those two memories cross my mind. I can't quite put my finger on the exact words, but I am pretty sure there is a tale of redemption in there somewhere; a story of sweet success.

My Love Letter To The Kelantanese
I Will Bake You A Pie
Universally Speaking
Now That's A Pizza Pie!
Heavenly Peach Pie
My Thanksgiving Feast
Coal Miner's Daughter
"T" Is For Thanksgiving
More Than Ever
Leftover Pie Dough
Posted by Diane Streicher @ Diane Again at 11:59 PM