Anatomy Of A Visit To The Vet

Today was a big day for Ranger; he had his annual check-up at the vet.

{When he was two years old, Ranger got super sick. Basically, his swollen, bloody face looked like he was having the world's most extreme allergic reaction; his eyes looked like Rocky's eyes after a fight. Only worse. Eventually he was disagnosed with juvenile cellulitis, a disease of the immune system, and with the right treatment and antibiotics, we got his symptoms under control. Thank goodness. But the condition persists and he is still on medication, so every year, I take him to see a very nice man named Alan Mundell who is a veterinary dermatologist ($$$) just to be sure all is well.}

In the parking lot outside the vet's office is a friendly little patch of grass with some maple trees on it. As usual, Ranger was wildly enthusiastic about sniffing it out on our way inside. 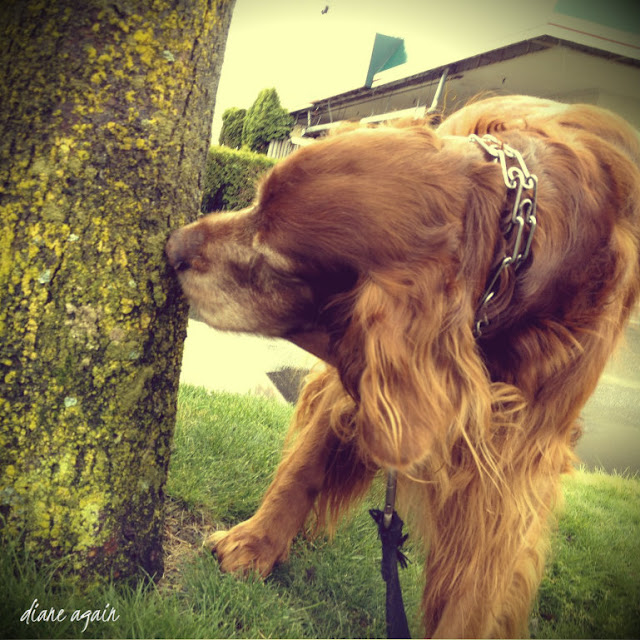 Now full disclaimer here. I am not one of those people who treats their dog like a human being. I don't share my food with Ranger, I don't dress him up, I don't kiss him on the lips.

On his sweet little furry red head, of course. But not on the lips.

Even though he is not like a child to me, I love my dog very much and I do whatever I can to help him live a healthy, satisfying dog life. Which means that I spend a lot of time letting him sniff... 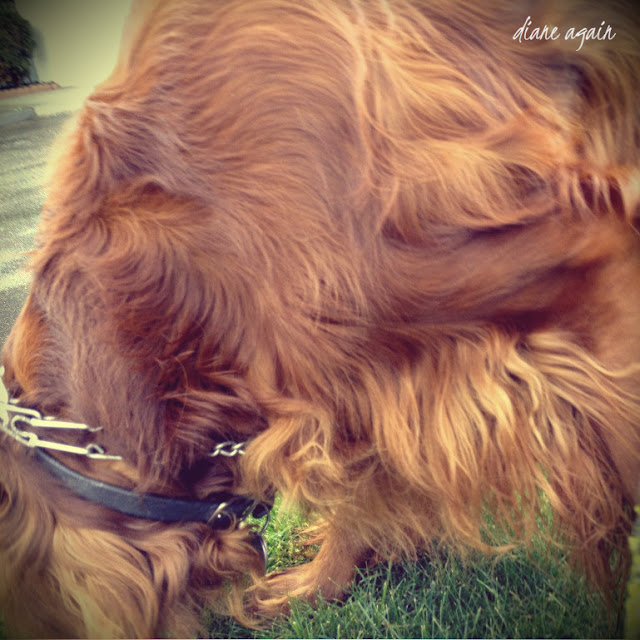 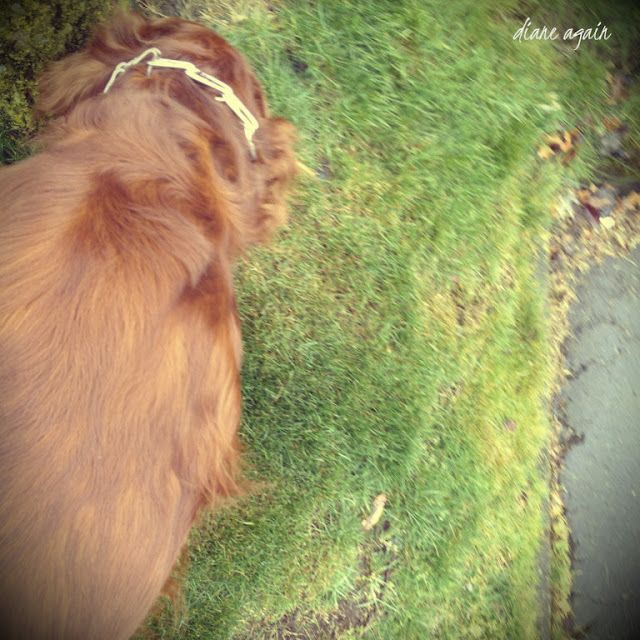 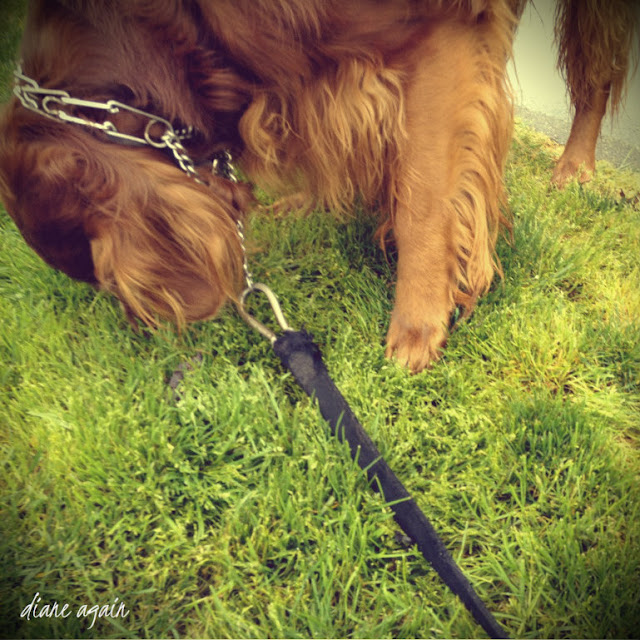 Ranger is a bird dog. He was born to sniff. He is a perpetual sniffing machine. If I let him, he would spend every minute of every day outside with his head down and his nose to the ground, deciphering great scent messages that are mere mystery to me. Lord knows I try to be patient with the little dear, and I wandered up and down the grassy bit for several minutes today, giving him a chance to drink up all those delicious scents.

But eventually the time came to head inside to the vet's office.

Did I mention that Ranger does not like to go inside to the vet's office?

Sadly, he does not.

Dr. Mundell is a very nice man. He talks kindly to Ranger, he asks me all sorts of concerned questions about Ranger's health. He gets down on the floor to examine Ranger and gives him lots of belly rubs. Once, he even presented Ranger's case at an international conference of veterinary dermatologists. If that isn't love, I don't know what is.

But the moment we cross the threshold into the vet's waiting room, Ranger's mood changes. At first, he has hope, because sometimes he comes in with me to pick up a batch of his pills.

Here, you can see by the perky and upright position of his adorable ears, that Ranger is assessing my behavior to see if this is a pill pick-up or a full-on physical exam. 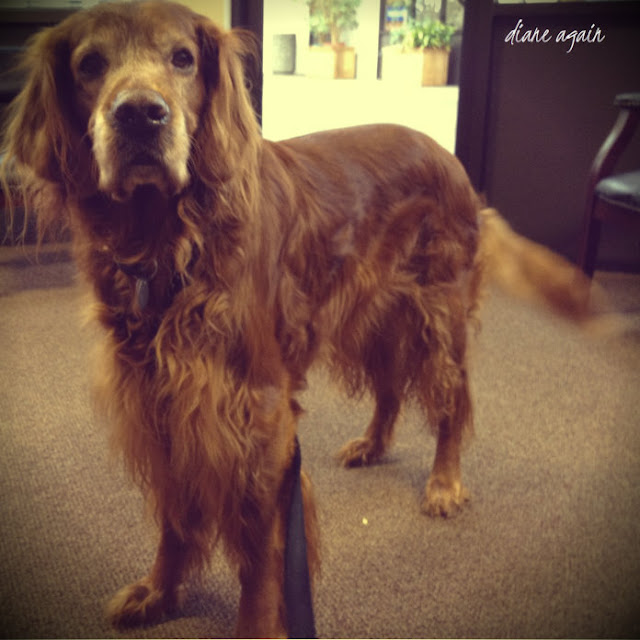 Once I take a seat in the waiting room, my actions confirm his worst fears. His ears droop, signalling that he now understands his fate and wordlessly begs me for sympathy. 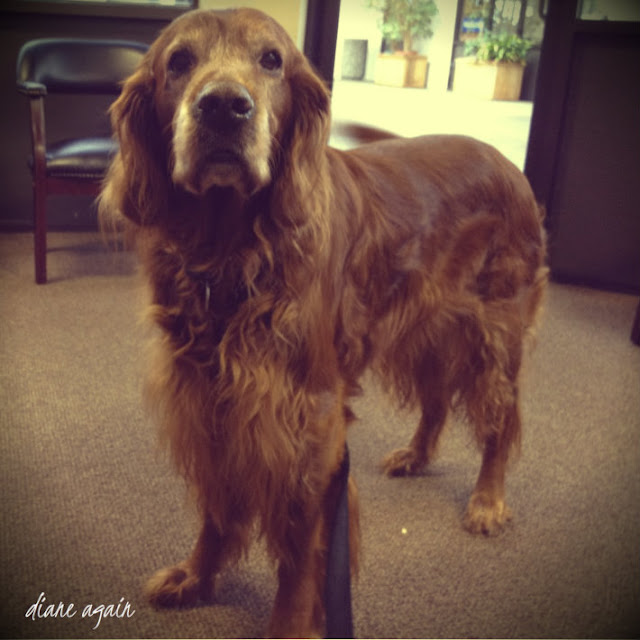 Hoping to stave off his annual tantrum, I try to distract him with attention. I rub his ears, pat his back, croon to him in soothing tones. He allows me to fuss over him, but he turns around to orient himself toward the door and gazes toward freedom.  Uh-oh. Here it comes. 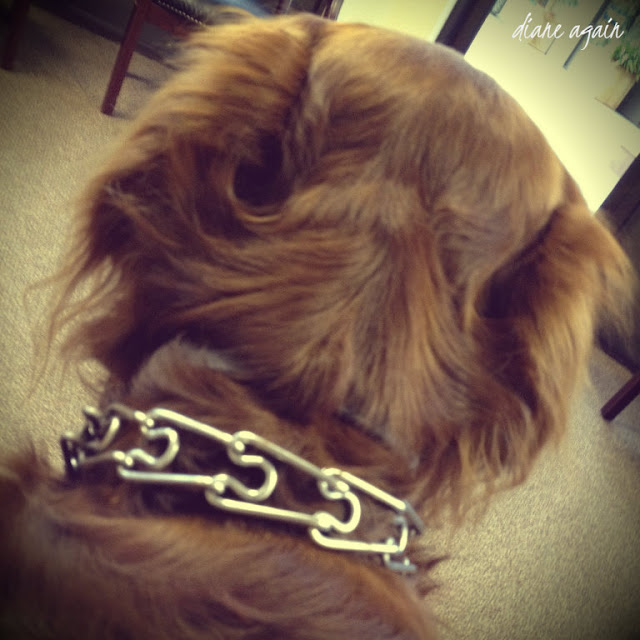 Like a tired toddler who can't quite keep himself together, Ranger came unglued. The next few minutes went like this:

Ranger stays. He gazes wistfully out the door. He sighs. He looks up at me, gauging my behavior.

I try to ignore him.

He sighs again and looks back out the door. He sees interesting things out there and his ears perk up. He squiggles around on the floor to try to improve his line of sight.

I notice this violation of the 'stay' command and make little warning sounds with my voice.

He pleadingly looks back up at me, then out the window again.

I can see his muscles twitching. He won't last much longer.

Suddenly, Ranger leaps to his feat, swats at the door (his way of saying "LET ME OUT,") and looks back at me to see if I am reading his oh-so-subtle clues.

And the cycle repeats itself. 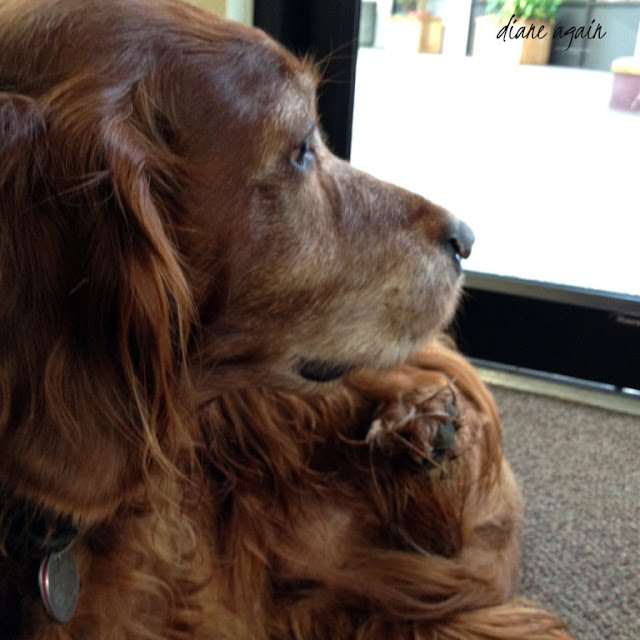 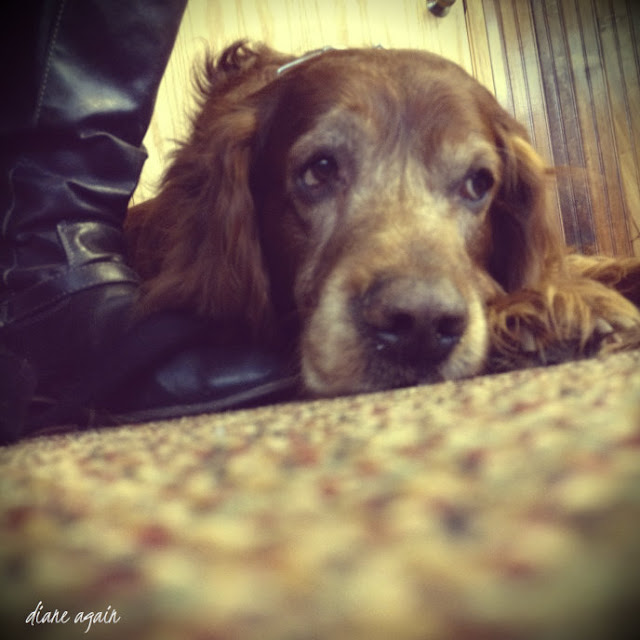 We waited for a long time. After countless repetitions of this process, the assistant mercifully called us into the exam room. But today was not my day. We waited at least another fifteen minutes in there. The tantrum continued, with a few new twists.

This room did not have a glass door, but it did have a window with mini-blinds. Ranger discovered that by jumping up and putting his front paws on the windowsill, he could easily use his nose to adjust the angle on the blinds and successfully look outside. I did not approve.

Just once, Ranger experimented with adding a vocal component to the tantrum. His first pathetic whine earned such a withering glare from me that he abandoned the effort and went back to soundless drama.

When the vet finally walked through the door of that exam room, he was greeted by the sight of me sitting in his spindly little exam room chair with all eighty quivering pounds of Ranger lying across my lap, his long, gangly legs hanging down on opposite sides of the chair, and his trembling chin laid ever so gently on my shoulder.

Dr. Mundell is a very nice man, but at the sight of Ranger and me in that chair, he leaned against the door and burst out laughing.

Ranger is a very friendly dog, but at the sight of Dr. Mundell, he pressed even closer to me and hid his face in my lap.

I am a fairly patient dog mom, but at this point, the only thought in my head was, "A year between these visits is not nearly long enough."

More Anatomy Of posts for your dissection pleasure: