Last Friday afternoon, as usual, I was driving on the expressway. After picking up one of my daughters in Seattle, my two youngest and I were heading north on Interstate 5. If you don't live on the west coast, I'll explain that it's a major expressway that typically runs between four and six lanes of traffic in each direction. It's busy and crowded pretty much all the time.

Anyway, we were almost home. Ranger was quietly sleeping in the back seat, with his head on my daughter's lap, we were chatting about this and that, and I had just started the series of merges to take me from the far left lane to my upcoming exit on the right. Traffic was heavy but not stop-and-go. We were cruising along about 50 to 60 miles per hour.

A bomb exploded in the back of my car. Or so it seemed.

The car swerved into the next lane, the dashboard lit up with warning lights, smoke obscured my vision, the accelerator was unresponsive as my speed dropped to almost nothing, I smelled burning rubber, and I felt a huge dragging sensation and a sharp pain in my lower back.

My first thoughts: Keep the car in the lane, carefully merge back that one lane to the left, find a safe place to pull over.

My second thought: Is anyone hurt??

It took me several full seconds to realize I'd been rear-ended. It was my first major accident. Hope it was my last.

Thank goodness, the rest of the story is all good.

No one was hurt.

I found a really great place to pull over. Thankfully, I learned about gore points last summer and now know that they are prime locations for troubled expressway motorists. I'm strangely proud of the fact that I managed to land my completely messed-up car out of the flow of traffic and prevented a major back-up during Friday afternoon rush hour.

It wasn't my fault. A witness with a dashboard camera caught the whole accident as it happened, and clearly, the guy who hit me just wasn't paying attention. It could happen to any of us who drive on crowded expressways. Still, glad it wasn't me.

The guy who hit me - around 30 years old, driving a brown 1992 Ford pickup - was apologetic and just the right amount of mad at himself. I was nice to him. Really, it could happen to any of us.

The tow truck guy came in record time; he was a roadside angel and my hero. I love people who are calm and helpful in a crisis. 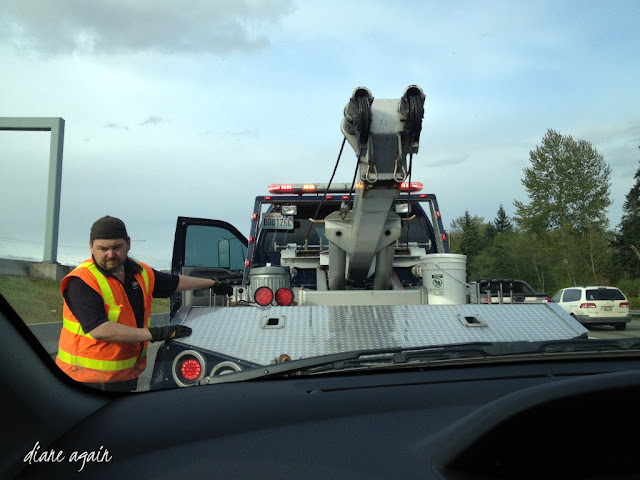 We can survive on one car for the next few weeks. I'll be doing a lot of extra driving, but it will all work out.

The accident scared poor Ranger out of his wits. He's been jumpy and extra sensitive all weekend, but he'll be alright.

My daughters and I have a new Fear Bond.

Accidents put life into perspective. This one reminded me of the invaluable kindness of strangers, of the relative unimportance of material possessions, of the importance of telling your loved ones what they mean to you.

I'm very thankful that my accident has such a happy ending.
Posted by Diane Streicher @ Diane Again at 1:39 AM