My garage is a very busy place. Yes, it is a home for cars, as well as the lawn mower, some bikes, garden shovels, and several pairs of boots. We also have a big workbench, scrap lumber pile and tool area; lots of gardening supplies; shelves full of camping gear; two vacuums and some cleaning supplies; an orderly heap of skis and snowboards; an assortment of tubs full of holiday decorations; many boxes full of school work and treasured projects; and two, yes, two art studios.

On top of all that, my garage is also a temporary holding zone for stuff we have cleared out of the house, but aren't sure what to do with. Since this house has neither a basement nor an attic, the garage is definitely our go-to storage area.

Whew. Like I said, it's a busy place. And it requires a lot of tending to keep it from becoming a hoarder's den.

So today, as I often do, I devoted several hours of my time to knocking back the clutter and fighting the natural laws of entropy.

Toward the end of this session, I stumbled upon a stash of old letters and cards, saved by me for sentimental reasons but suffering from disorder. So I began to sort. And oh, what treasures I found! 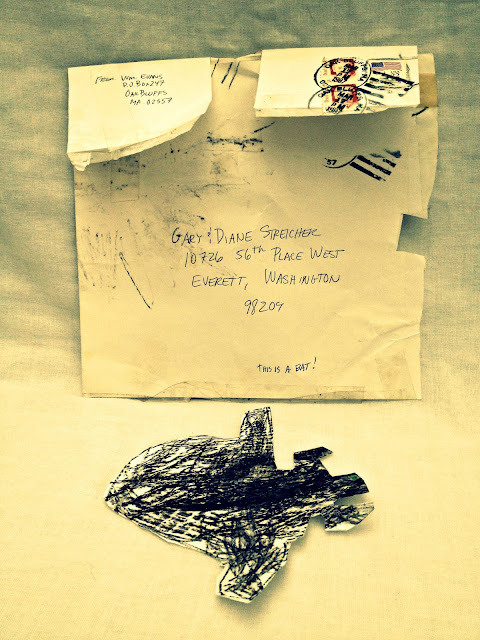 This, as the envelope clearly states, is a bat. Lovingly created and sent to me in this highly inventive homemade envelope by my nephew, Will, when he was just a wee little lad. And a creative one, at that. 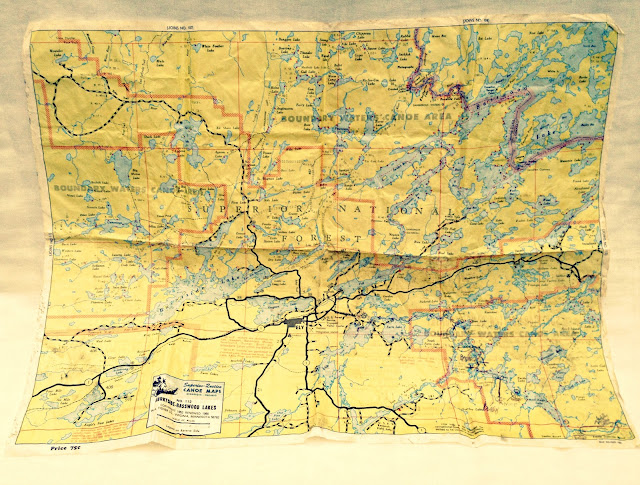 Feast your eyes on this waterproof map of the Boundary Waters Canoe Area in northern Minnesota. On a crazy cool five-day wilderness adventure there, in which we saw many more moose than human beings, I was the navigator of the route and therefore, the inheritor of the map. 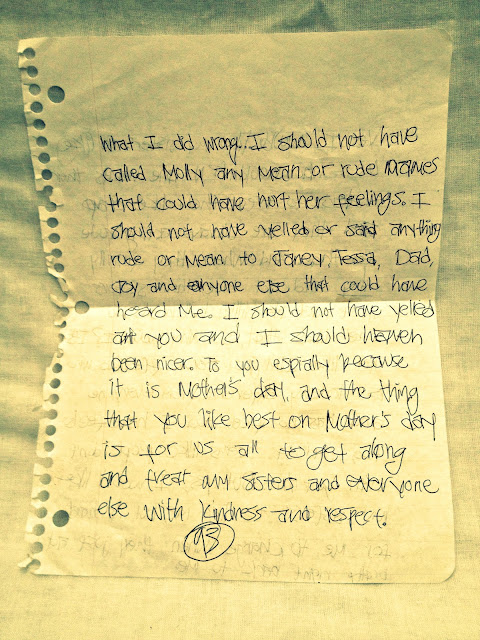 Once my daughters became old enough to write, and were (occasionally) naughty, I began to deal with their transgressions by having them write to me, explaining what they did wrong and how they might behave better in the future. It is always quite a reassuring thing to read their responses, in which they typically say all the right things. This letter is a shining example of remorse, and I believe the "93" at the bottom of the page refers to the word count. Yes, I did set minimum length requirements. 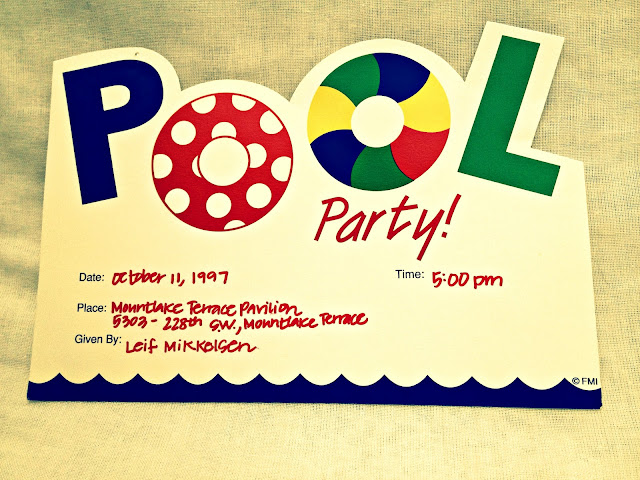 This adorable invitation to a neighbor boy's birthday party makes me sad. His mother was a sweet, dear friend of mine, and she died in a traffic accident just a year or two after this party. Bless her soul. 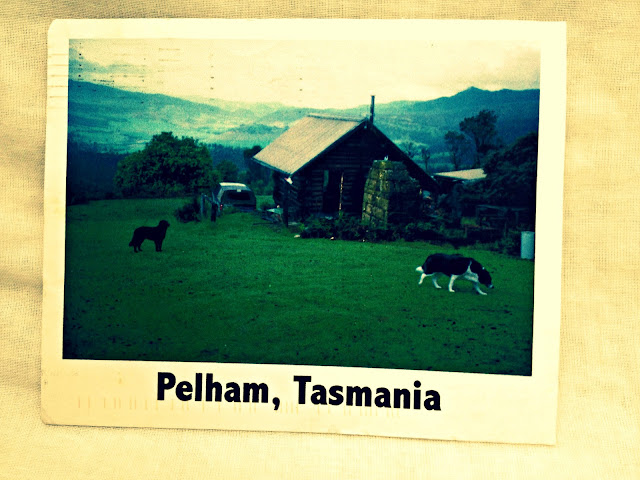 A dear friend named Rosie, who was born and raised on this island south of Australia but living here in the states, took her family back to Tasmania for a six-month stay. Their mission was to help restore this old family cabin, originally build by her grandfather and in serious need of work. All of our children were friends, and it was a great adventure for us to keep up with their trip. 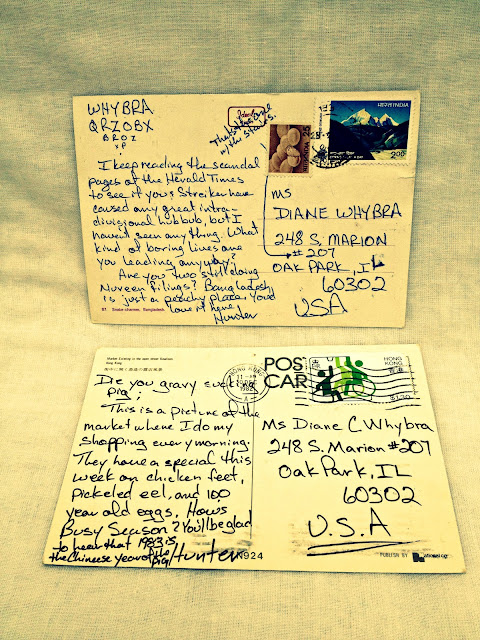 When I was barely out of college, a slightly older friend of mine very quickly became bored with corporate life and dropped out for a year to travel the world. He sent me witty postcards from exotic locations, full of inside jokes and wacky references, and I laugh just to see what we thought was so funny. 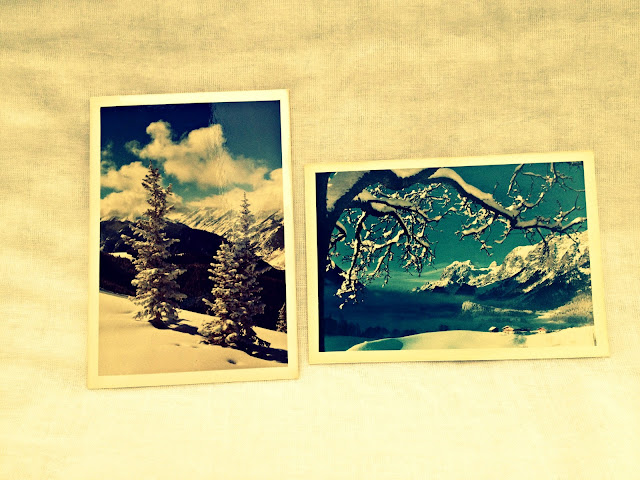 My late father-in-law, bless his soul, was an avid photographer, and I found several old, old photos, presumably his work, scattered among the other papers. These two are among my favorites, because they remind me of his passion for the American West (he lived his whole life in Ohio) and because they remind me of my passion for my beloved Stevens Pass. 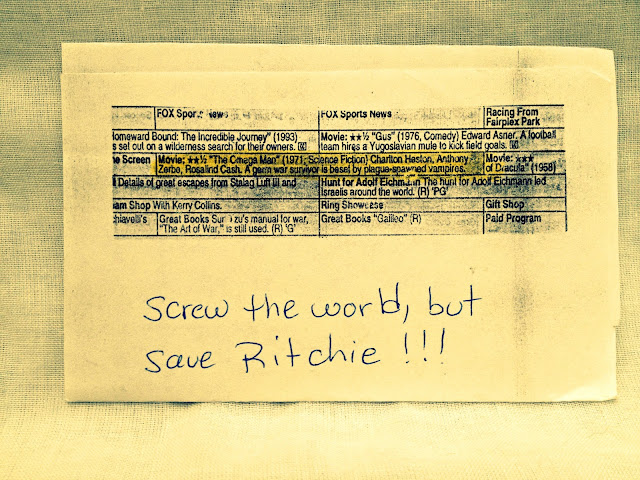 When we were teenagers, my girlfriends and I saw a movie that scared us out of our minds. It was an ancient bit of 70s post-Armaggedon science fiction called The Omega Man, involving zombie attacks and Charleton Heston as the last man living. Ever since, we've had a series of running jokes and ongoing banter about the movie. So when one of my friends saw it listed in a program guide somewhere, she mailed me a highlighted photocopy with one of our favorite quotes. Lolz. 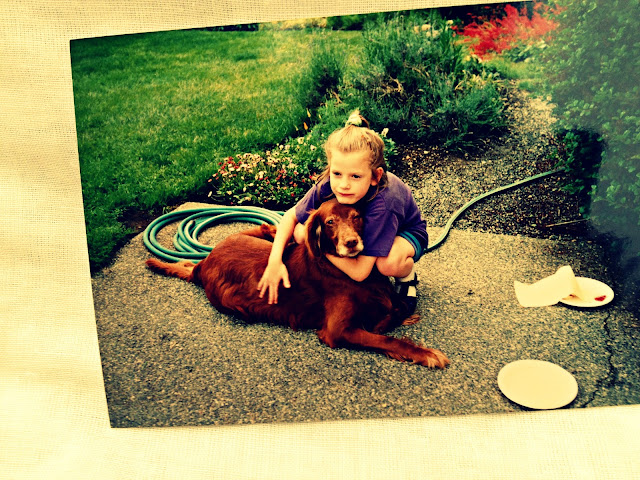 And this sweet little photo is not so old as the rest. This is my second-born, giving a big hug to our good dog, Casey. He was the dog of my daughters' baby days; a more gentle and accepting animal you will not find. Even though his girl seems to have him in a head lock and may even be stepping on his left front leg, Casey looks calm and relaxed. Bless his soul, too.

In finding treasures such as these today, my work was rewarded and my organizing spirits renewed. To honor this day with a short bit of poetry, I offer the following garage-cleaning haiku:

Opening boxes
On a cloudy summer's day -
Memories fly out.

I love to clean. And I love to tell stories about cleaning. Wanna read some more?